10 Hobbies for the Road 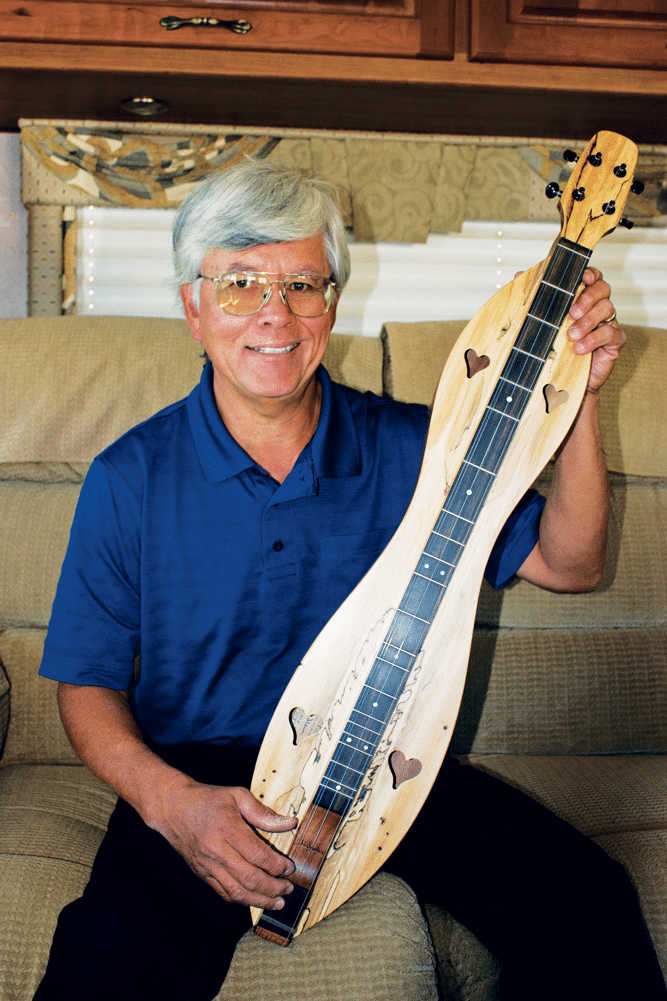 Even more portable pastimes to enjoy while traveling

In 1930, British philosopher Bertrand Russell wrote,  “Anything you’re good at contributes to happiness.” More than eight decades later, it’s easy to see the wisdom in his words. I meet lots of happy people when I travel, many of them doing what they love, things they’re good at.

Two years ago I started asking other RVers about their hobbies. MotorHome published the results in August 2012 (“Portable Pastimes”) and October 2013 (“Home is Where the Art Is”). I continue to be amazed at the variety of ways these creative, intelligent and cheerful people spend their time. The activities enjoyed by this year’s group of happy hobbyists include embracing new learning, creating arts and crafts, and playing musical instruments.

Last year’s travels took Craig and Debbie Rice to Mountain View, Arkansas – the folk-music capital of the state – for the Ozark Folk Festival. A longtime music fan, Craig learned to play the guitar “back when he had black hair in high school.” Over the years he picked up the ukulele and mandolin. When he heard the authentic old-time sounds of the mountain dulcimer at the festival, he had to have one. He bought a McSpadden mountain dulcimer, handmade in Arkansas. While Debbie was busy quilting, Craig taught himself to play. They plan to return to Arkansas in July for the Mountain Dulcimer Workshop at the Ozark Folk Center State Park. It’s evident that this region takes its music seriously; many of the RV parks and campgrounds provide air-conditioned picking sheds for jam sessions.

Linda Myers loves to learn; she enriches her life by exercising her mind. Through Massive Open Online Courses or MOOCs, she has taken classes as diverse as chemistry, psychology, art and conflict resolution. Since Myers has no need or desire to earn another degree, she picks topics simply because they interest her. She appreciates the flexibility; she can take the classes any time, day or night, wherever her travels take her. In the four months since she heard about MOOCs, she’s taken nine classes. An added bonus is that these courses are free. More than 40 providers offer courses on MOOC List (www.mooc-list.com). Linda has used Open2Study and Coursera. She found the four-week courses offered by Open2Study to be a comfortable pace and level for her. Partnering with top universities, Coursera courses are longer and more challenging.

When Debbie and Craig Rice became full-timers in 2005, they selected a motorhome that would allow Debbie to continue her longtime quilting hobby. A sitting room off their bedroom has enough counterspace to accommodate Debbie’s two sewing machines: a Janome 11000 Special Edition for embroidery, quilting and sewing; and a New Home for sewing mittens and upholstery. She finds inspiration for new projects at quilt shows, from other quilters, in magazines and through their travels. Because the Rices have traveled extensively – 49 states, Canada, Mexico and Belize by RV – Debbie has plenty of inspiration. She usually has three or four projects going at once. Craig enjoys helping her select fabrics. Last Christmas she gave quilts to 14 family members. Debbie belongs to a quilting guild that donates pillowcases and “quillows,” quilts that fold into pillows, to various charities such as children’s hospitals and organizations serving veterans and cancer patients.

John and Judy Wagner have been full-timers since 1999, dividing their time between Illinois and Arizona. While traveling from place to place, their bins are filled with an Excalibur scroll saw, 20 sizes of blades, a belt sander, a palm sander, a box of patterns, various acrylic paints and polyurethane, and cherry and walnut wood. When they arrive in Arizona, John sets up shop in their shed at the RV park where they work as hosts. After he applies a pattern to the wood with double-sided tape, he patiently cuts the wood. He makes crosses, puzzles and other works of art. If an item needs to be painted, Judy does that. He sells the items at craft fairs or gives them away as gifts. Military and religious items are most popular. His Noah’s Ark puzzle raised $200 for an Illinois Ronald McDonald House at auction.

For the 12 years Bill and Betty Lancaster have been RVing, they’ve been making beautiful music together. Betty plays a 1965 vintage Kay upright bass. Bill said, “She’s fiddled with the bow a little bit, but she prefers to pull the strings.” With Bill on a Martin guitar, they sing songs from the ’50s and ’60s, folk, bluegrass and gospel. They call their music “folkgrasspel.” They’ve performed at RV rallies, fundraisers, assisted-living facilities, nursing homes and various venues throughout the year for the local Mental Health Association. One of their favorite gigs was playing at a Friendship Force International gathering, which Bill describes as “a student-exchange program for adults.” They also have been known to host open jam sessions at rallies, welcoming beginning to advanced musicians. While on the road, they look for musical instruments they can sell on eBay. At home in Alabama, they are active members of the Huntsville Traditional Music Association.

Six years ago, Blanche Murrin attended a gourd art show in Indiana. She was instantly hooked. She took classes, read books on gourd art and unleashed her natural creativity on these simple objects. While gourds may be just hard-shelled, inedible fruits to some, to Murrin they are the starts of something beautiful: lampshades, bowls, luminarias, purses and jewelry. Many of her pieces are inspired by nature and include leaves and flowers; some are embellished with air-dried clay or wrapped with wire. Her tools include a MicroLux saw, wood burners, drills, pliers and files. At home in Indiana, she has even grown some of her own gourds, including her favorites, apple and warty gourds. Shortly after I met Blanche, she entered five items and won six ribbons – one gourd also earned a judge’s choice award – in the Wuertz Farm Gourd Festival in Casa Grande, Arizona. She shares her love of gourd art by teaching classes.

At an informal RV gathering several years ago, a man was demonstrating how to make wind spinners out of beer and soda cans. John Schmaltz wasn’t really interested, but when the teacher gave Schmaltz his tools, he decided to try it. He was surprised to find he enjoyed making them. When he announced to his two children that he was now a crafter, they both responded with the exact same words, “Dad, you don’t have a crafting bone in your body.” Now he finds it addictive. A series of three spinners, which requires six aluminum cans, takes about 90 minutes to make. He crafts them in the evening while watching TV. For the last three years, he’s been selling about 100 wind spinners a year for $10 each at craft shows. It’s a low-cost hobby requiring simple handmade tools, scissors, pliers, a pattern, beads and wire. Several people who bought them for their decorative value reported that strategically placed spinners keep woodpeckers and other pesky birds from building destructive nests in their stationary homes.

During the 28 years Penny Burns owned American folk-art stores, she became an expert on Nantucket Lightship Baskets. After admiring them in her stores, she learned to make them 12 years ago. She considers it a perfect RV hobby; she weaves while her husband, Robert, drives. On a recent road trip from California to the Midwest, she made 27 baskets. Robert is also a big help. He adapts plastic containers to use as molds for the baskets and makes the wooden bottoms and handles. This is a big saving, as the molds can run hundreds of dollars. Other supplies include weaving cane and staves. Eight years ago, Penny started teaching classes in Nantucket basket weaving in her home studio and at the RV resort when they spend the winter. Her recent five-week class filled to capacity with 13 students.

Robert Burns’ hobby of woodworking extends beyond making handles for Penny’s baskets. As a business owner with a high work ethic, Robert knew he’d need a hobby to keep himself busy when he retired. He enjoys working with wood and has made several pieces of fine furniture for the home he shares with Penny. He wanted something portable that he could do on the road. Santa figurines hand carved out of basswood became his specialty, but he’s also been known to carve cowboys, angels and animals. Robert is president of the Northern California RV Carvers, a chapter of the California Carvers Guild. With more than 20 members, the group meets for four or five days each month at various RV parks in Northern California. The carvers work on their projects in groups, while many of their spouses strike out on their own for basket weaving, quilting or other creative endeavors.

When my niece, Caley Coulson, gave everyone on her Christmas list hand-felted soaps last year, I knew I’d found a hobby I could do in our motorhome. She showed me how to make them using bar soap, wool roving (unspun wool) and hot water. Before we joined the snowbird migration, I packed what I had previously thought would be our lifetime supply of gift soaps. I bought six skeins of colorful roving. Once we settled in Arizona, I invited my friend Judy White over to give it a try. We watched a few YouTube videos on the subject. The process is simple: Wrap a bar of soap in several layers of thinned-out wool roving and tuck in the ends; use strips of roving in contrasting colors to make a design; dunk the soap in hot water; rub gently until the soap lathers and the wool felts (or contracts) around the soap. Most websites recommended using mesh fabric or nylons to help the felting process. We forged ahead, felting by hand alone, as my niece had done. The next time, I tucked the wrapped soap in knee-high hose before getting it wet. Both methods produced fine results. I had so much fun I even felted a heart-shaped rock I’d found on a beach.

While some of these happy hobbyists have spent years perfecting their crafts, I found something that I could do with an hour’s training. The important thing is to do what makes you happy.