The Beartooth Scenic Highway, a National Scenic Byways All-American Road, winds over steep switchbacks and climbs magnificent mountains for approximately 70 miles from Cooke City to Red Lodge, Montana. Beartooth Highway climbs one of the highest and most rugged areas in the lower 48 states, with 20 peaks reaching over 12,000 feet in elevation, including Granite Peak, Montana’s highest at 12,799 feet. The road itself has the highest elevation of any highway in Wyoming (10,947 feet) and in Montana (10,350 feet), and is the highest elevation for a highway in the Northern Rockies. 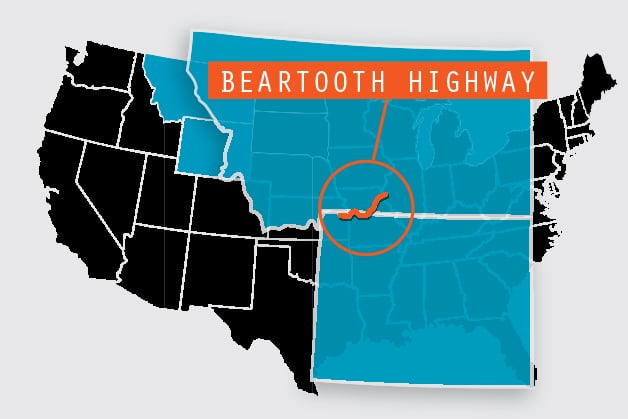 The Scenic Byway : From Yellowstone National Park and the Cooke City, Montana, area, the Beartooth Highway runs 68 miles to Red Lodge, Montana. From Cody, Wyoming, travel north on Wyoming Highway 120 for 17 miles to the junction of Wyoming Highway 296 – the Chief Joseph Scenic Byway. Follow the byway 47 miles to its intersection with the Beartooth. From here, turn right to go to the Beartooth Plateau and down the highway’s switchbacks into Red Lodge, Montana. A left turn at the intersection leads to Cooke City and Silver Gate, Montana, and the northeast entrance to Yellowstone National Park.

The Most Beautiful Drive in America

Heralded as one of the most scenic drives in the United States – Charles Kuralt described it as “the most beautiful drive in America” – the Beartooth, traveled in late spring to midsummer, gives views of the snow-covered Absaroka and Beartooth mountains. From dizzying heights, travelers pass over high alpine plateaus dotted with glacial lakes and sneak a quick look into forested valleys. On some slopes, the mountain rocks peek from snow blankets like a caramel-colored tapestry veined with black streaks. On our first venture in early June, we headed out from Yellowstone in our dinghy vehicle and noticed that the snow banks at pullouts rose higher than the roof of our car.

Between Yellowstone National Park and Red Lodge, Montana, the curving, zigzagging roadway climbs through portions of Custer and Shoshone national forests and passes a wide range of ecosystems from lush, green lodgepole pine forests to alpine tundra. The surrounding snowcapped mountains lie within the 943,377-acre Absaroka-Beartooth Wilderness. The harsh climate at the highest elevation stunts the growth of trees and shrubs. The plants that survive have adapted to convert sunlight to heat, and many conserve water in the same manner as desert plants. In late June and mid-July, the fragile tundra blossoms with blue, pink and yellow wildflowers.

From Yellowstone National Park and the Cooke City, Montana, area, the Beartooth Highway runs 68 miles to Red Lodge, Montana. From Cody, Wyoming, travel north on Wyoming Highway 120 for 17 miles to the junction of Wyoming Highway 296 – the Chief Joseph Scenic Byway. Follow the byway 47 miles to its intersection with the Beartooth. From here, turn right to go to the Beartooth Plateau and down the highway’s switchbacks into Red Lodge, Montana. A left turn at the intersection leads to Cooke City and Silver Gate, Montana, and the northeast entrance to Yellowstone National Park. 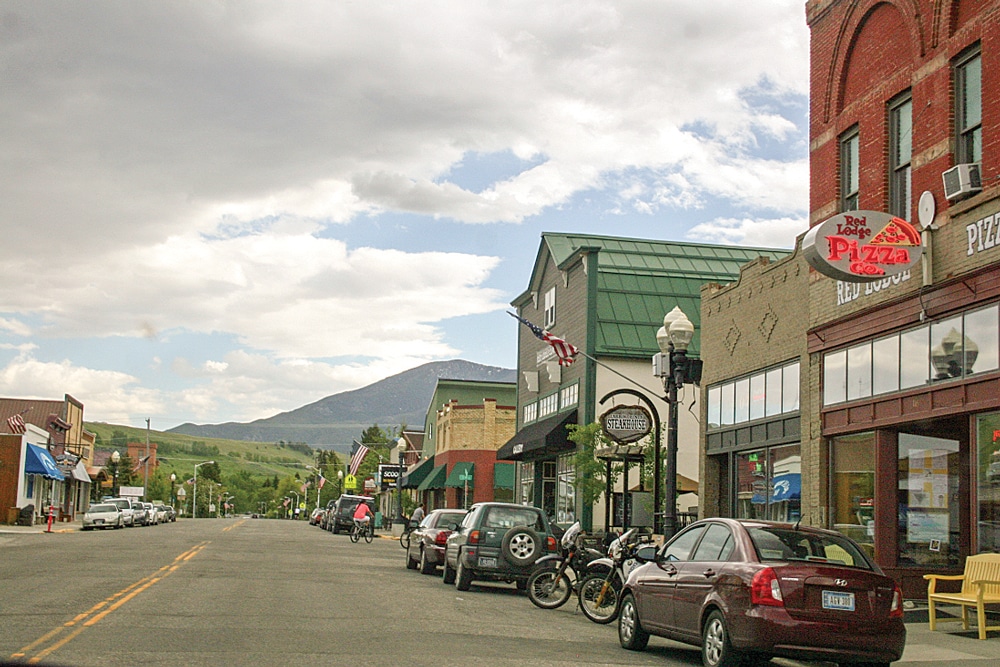 On both of our trips, we made a stop in Red Lodge, Montana, for dinner.

Wildlife along the Beartooth Scenic Highway

Grizzly and black bears make their home in the wilderness viewed from the winding roadway, as do elk, deer, moose, bighorn sheep, Rocky Mountain goats, mountain lions and bobcats. With more than 950 alpine lakes and hundreds of miles of trails, the mountains offer numerous opportunities for hiking and backpacking. Many trails are accessible directly from the Beartooth Highway.

Weather on the Beartooth Scenic Highway

Visitors can actually cross-country or downhill ski in June and July. In fact, that’s the only time skiers can get through because Beartooth Pass, at 10,947 feet, is closed in winter due to heavy snow and only opens from Memorial Day weekend through early October. Two weeks after we made our June drive to Red Lodge, the pass closed due to a summer snowstorm. Because of the high altitudes, the pass is also known for strong winds and severe thunderstorms.

Guided horseback trips are also available, as is fishing for trout in the streams and lakes adjacent to the highway. Although the National Forest Service offers a choice of 13 campgrounds for overnight stays, the highway is not recommended for motorhomes, so plan on driving your dinghy.

The numerous switchbacks and steep climbs also call to motorcyclists. Those who leave an RV in a neighboring town and drive the Beartooth in their dinghy vehicle should plan on at least three hours driving time to make the trip between Yellowstone’s Northeastern Gate and Red Lodge, Montana. We took more time due to frequent stops for photographs of the Absaroka-Beartooth Mountain Range. Even on sunny summer days, jackets feel comfortable. At the summit, weather can change and be quite cool.

Following a quick supper in Red Lodge, we headed back along the same route. The return trip was equally interesting and scenic, until darkness caught us at about 10 p.m. The mountain peaks, slopes and valleys look different traveling east to west – or west to east. And back in Yellowstone National Park, we saw more animals at dusk. 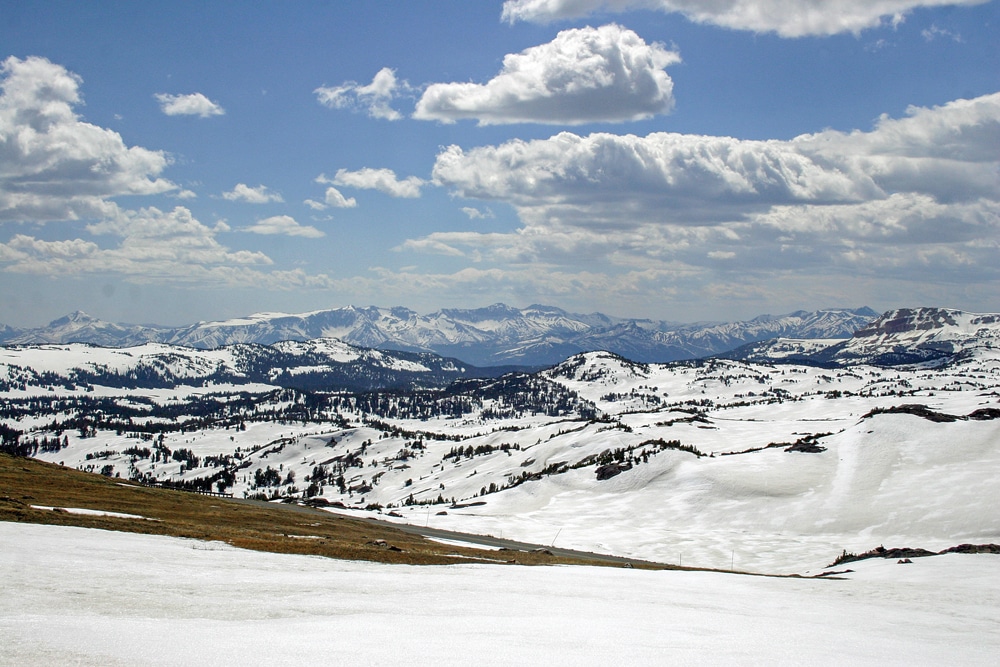 As we traveled along the Beartooth Highway in June, there was plenty of snow on the local mountains and the Absaroka Mountain Range.

In late September, we made our second trip along the Beartooth Highway. How different the landscape looked from our previous drive, when a shawl like white ermine had wrapped the meadows and mountains! Under September’s autumn sunlight, mountain slopes above the tree line appeared as smooth as soft buckskin leather covering a teepee. Rocks that lay under deep snow in late spring now littered slanted mountainsides in the warmth of early fall.

On this trip, we entered the Beartooth from the Chief Joseph Scenic Byway (Wyoming Highway 296), running north from Cody, Wyoming, and connecting with U.S. Highway 212, which is the Beartooth. The combined routes cross the Shoshone National Forest through the Absaroka Mountains to the Clark’s Fork River Valley. Summer and fall are the most predictable times to travel the Chief Joseph and Beartooth highways. On our autumn drive, grasses and scrub vegetation nestled in copper-colored meadows between fir forests. Groves of aspens like bright yellow sunspots accented the dark green of the firs, their golden leaves rustling in the wind like the crisp taffeta skirts of a debutante’s ballgown. In one honey-hued meadow, three black-tailed deer ripped grasses, occasionally eyeing our cameras with curiosity.

At a pullout on the Chief Joseph Byway, we looked over the edge of a steep mountain to the loops of road on the valley floor, crisscrossing like ribbons on a maypole. We read information on large tablelike signs, telling about the pursuit over the rugged mountains of Chief Joseph’s Nez Perce by the U.S. Army. On that September day, the mountain ranges stretched peacefully before our eyes. However in 1877, the craggy terrain appeared hostile and forbidding to the fleeing Nez Perce, following their leader, Chief Joseph, to what they hoped would be a new home in Canada. After the Battle of the Big Hole in Idaho in 1877, Chief Joseph led about 1,000 members of his tribe over a 1,600-mile trek through Yellowstone, trying to escape capture and orders for the Nez Perce to settle on a reservation. Crossing Yellowstone National Park, the Nez Perce headed north up the Clark’s Fork River. They aimed for Canada across steep mountains covered in thick forests. After the five-day Battle of Bear Paw in northeastern Montana, the tribe halted, only 40 miles from the Canadian border. In his speech of surrender, Chief Joseph expressed dignity and defeat with his famous words, “Hear me, my chiefs! I am tired; my heart is sick and sad. From where the sun now stands, I will fight no more forever.” Despite promises to allow them back on their lands in Wyoming, the U.S. Cavalry forced the Nez Perce tribe onto reservations in Oklahoma and Washington.

Still reflecting on the plight of the Nez Perce, we continued on, over the winding road we had overlooked, passing rustic log structures, some abandoned, a few still sheltering cattle and people. At a bend in the road, we took a short trail to an unnamed cascade that tumbled over layers of ancient rock. Frothy white water, constrained by the creek’s narrow passage through tall stone walls, caught rays of the sun in a rainbow. Around another curve, we stopped to watch two cowgirls on horseback, circling a small herd of cattle, their trained dogs gently nipping the heels of black steers.

After joining U.S. Highway 212, we turned west on the Beartooth to find a restaurant for lunch in Cooke City, a gateway to the scenic byway. About 8 miles east of town, bright yellow aspens lined a stream of sparkling water gurgling over a brownstone creek bed. In the distance, Pilot Peak, stretching its pointed summit to the blue sky, stood like a sentinel over the Beartooth’s pristine landscape. After a hearty lunch, we pointed our compass east again to zigzag along the Montana-Wyoming border climbing to the 10,947 elevation of the Beartooth Pass. The distant mountains, snowcapped when we made the drive in early June, stood bare under a hazy sky. At a point called “Top of the World” (but it’s not!), we once again photographed the sign that previously had almost been buried in snow. We passed blue mountain lakes close to the roadway – lakes that had gone previously unnoticed by us as they were frozen solid in early June.

We descended on more curving switchbacks on the opposite side of Beartooth Pass, enjoying the brilliance of yellow aspens dotting the fir mountainsides. We drove into Red Lodge in time for a more leisurely dinner in a hometown restaurant. Returning to Cody, Wyoming, in twilight, we took a shorter route than crossing the steep mountains of the stunning Beartooth. We bid the winding roadway farewell, wondering if we’d ever travel it again. Perhaps other adventures will call us. Yet, we will always carry our memories of traveling the roadway in two seasons, and to have seen and photographed its ever-changing beauty.