Our first stop was Baker City, the largest town in the area other than La Grande. When we hopped out of our truck and began walking around, we were surprised by the many graceful Victorian and Art Deco buildings that line the city streets. Eye-catching Baker Tower rises nine stories above the town and has been the tallest building in Oregon east of the Cascade Range since it was built in 1929. Nearby, the ornate Geiser Grand Hotel dates back to 1899 and radiates an elegant aura reminiscent of a bygone era. 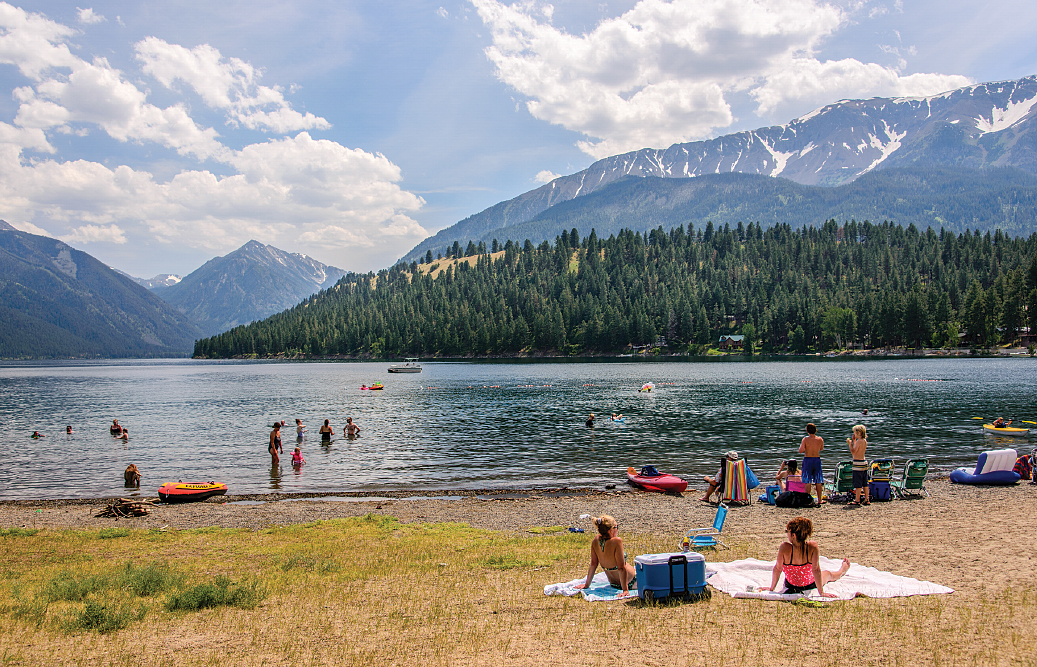 The Wallowa Lake Tramway ascends 3,700 feet as it zips to the summit of Mount Howard.

Once a stopping point on the Oregon Short Line Railroad, this understated yet sophisticated city has miraculously resisted change throughout the decades while somehow still keeping up with the times. As appealing as Baker City is, growth is not part of its essence, and the population has hovered between 9,400 and 9,900 residents since 1940. Yet, despite its refusal to allow big-box stores and industry to taint the outer edges of town with commercialism, modern culture is alive and well in the historic downtown. In summertime, when its many restaurants and bistros open their doors and spill out onto the sidewalks with street-side tables and chairs, the vibe in Baker City is decidedly youthful.

Every June the city holds a four-day bicycle stage race in which athletic cyclists vie for top honors in four races in and around town, akin to a mini Tour de France. We joined the throngs of people at outdoor cafés drinking Oregon microbrews and watched the final stage of the race that goes in a circuit around the city streets. A colorful blur of cyclists flew past us over and over, as the announcer excitedly clocked speeds reaching nearly 40 mph in the professional men’s category. 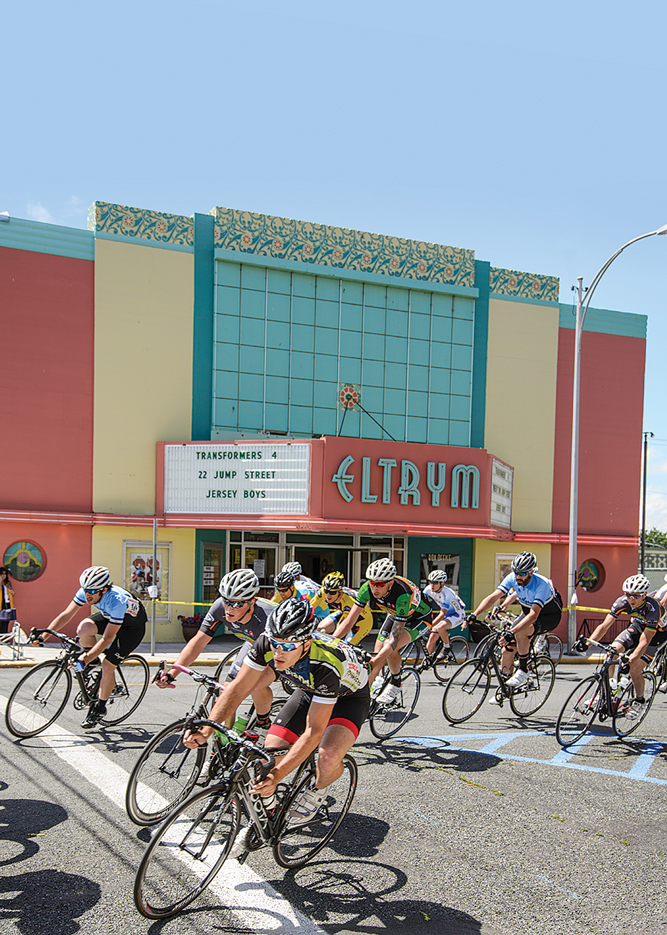 The annual Baker City Cycling Classic is the small-town answer to the Tour de France.

Long before playing host to bicycle races, Baker City made its name with gold mines, and one of the biggest gold nuggets ever found is on display inside the city’s U.S. Bank branch. Weighing in at more than 5 pounds, the fist-size hunk of gold was unearthed by George Armstrong in 1913. It escaped being melted down and is now one of the largest gold nuggets around. Valued at $100,000 in today’s prices, it is worth several times that as a collectible. Our eyes popped as we stared at it in its glass case and imagined what Armstrong must have thought as he carried it on the train in his pocket to nearby Sumpter, where he had it appraised.

Entrepreneur and business magnate Leo Adler was born in Baker City. He launched his career with a walking route delivering the Saturday Evening Post and Ladies’ Home Journal and wound up the head of a massive magazine-reshipping dynasty. The lovely 1889 home he lived in for 94 years until his death at age 98 in 1993 is now a museum. Besides his pretty home, what we appreciated most about this self-made millionaire was the wonderful paved path his foundation built around town. The trail winds along the back of neighborhood streets and is popular not only with local walkers and runners but with deer, too.

Traveling north and east from Baker City, we felt like we had arrived at the end of the world. We visited the tiny village of Joseph, tucked up against the soaring Wallowa Mountains at the end of a dead-end road. This small community of just 1,000 residents basks in a beautiful place that looks out upon pastoral landscapes filled with classic red barns. Every view is backed by exquisite mountain peaks, and until midsummer these towering pinnacles are crowned with snow. 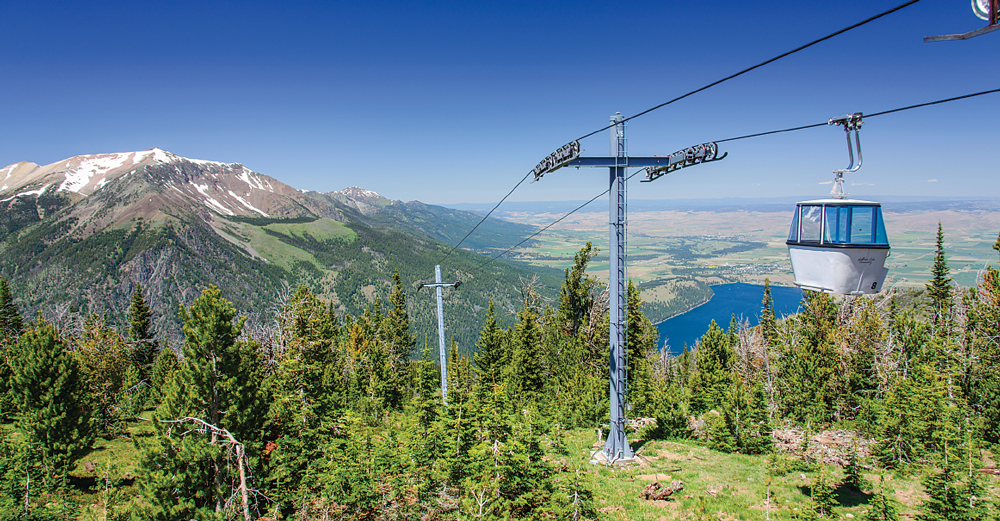 With a spectacular view, the beach at Wallowa Lake is a great place for sunbathing and swimming.

The village of Joseph is an ideal little walking town, and we enjoyed many a happy stroll along the main drag. Red Horse Coffee Traders is a favorite gathering spot for locals and tourists alike, not only for its welcoming ambience and fresh-roasted coffee, but because it is a reliable place to find an Internet connection in this remote outpost.

What is a Railrider?

On many days we saw an odd four-wheeled contraption sitting on the front lawn of the coffee shop. It had twin recumbent seats, bicycle pedals and thick plastic-rimmed wheels. We got talking with a fellow named Kim Metlen sitting at a folding table nearby, and he explained that this vehicle was a “railrider.” Before long, we had signed up to ride one on a tour he leads every day on the old railroad tracks just outside of town.

Metlen’s Joseph Branch Railriders tour takes a unique approach to making new use of old abandoned railroad tracks. Rather than a rails-to-trails program that removes the rails and ties from the ground, this rail-riding venture leaves the decommissioned railway in place and allows people to ride on the tracks using his custom-built tandem rail cycles. You can see the landscape from reclining side-by-side seats near ground level.

At the appointed hour, we found the four-wheelers lined up at the end of the rail line in Joseph, and two-dozen people showed up to pedal them the 6 miles out to the village of Enterprise. Helmets were required, even though it is nearly impossible to go more than 15 mph, and there is no way the railriders can tip over. Metlen had helmets available for anyone who didn’t bring their own. 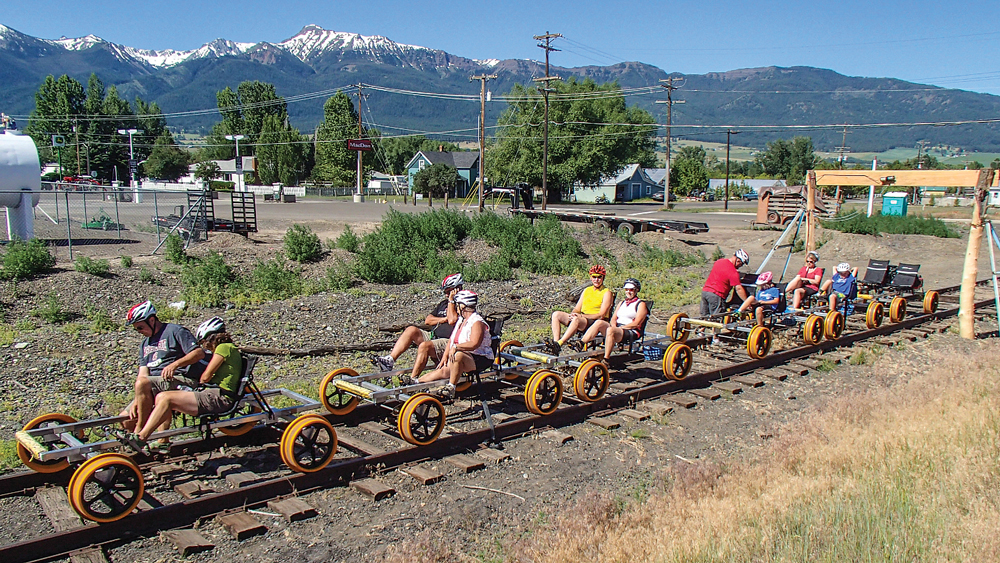 The views along this trail were lovely, with mountains, valleys and distant farmlands stretching out before us. Each railrider was ridden by two people, and we all went at our own pace. In no time at all, it seemed, we had reached our destination in Enterprise, and everyone hopped out to walk around. The cars are light, so each pair of riders easily picked up theirs to turn it around to face the other way. Then we jumped back on again and rode back to Joseph, watching the mountains grow ever larger as we pedaled.

Stunning Wallowa Lake lies at the south end of Joseph, nestled into the base of the Wallowa Mountains. It is a long and skinny lake that runs north-south, and we drove along the scenic shore-side roads that flank its sides. Wanting to get up into the mountains for a view without too much effort, we took a gondola ride on the Wallowa Lake Tramway to the top of Mount Howard, 8,000 feet above sea level, where the panoramic vistas go on forever.

The tramway was built as part of a planned ski resort, but the ski runs were never created. Today, it makes for an easy way to get to the top of the Wallowa Mountains for a bird’s-eye view of the Eagle Cap Wilderness. At the summit, we took the short hike around the mountain peak and enjoyed a tasty lunch at the restaurant, where we sat on a deck overlooking the lake and watched the gondolas floating up and down the mountainside.

Down at Wallowa Lake, we joined sunbathers catching the rays at a beautiful beach on the north end. Both kids and adults braved very cold water to swim, and lots of folks were out on kayaks and paddleboards. A few savvy people put their beach chairs right into the water so they could cool their toes, toss back a cold one and get a tan all at the same time.

At the south end, near the Wallowa Lake Tramway, Wallowa Lake State Park snuggles along the edge of the shore. The park offers swimming, a boat launch and a small marina as well as pretty campsites. This end of the lake has other RV camping options, too, and several private campgrounds are situated right next door to the state park.

Back in the town of Joseph, we were fascinated by the big, beautiful bronze sculptures of Western and Indian themes that decorate many street corners. Valley Bronze of Oregon has its foundry in Joseph, where it offers tours, and there’s a large gallery in town as well. We discovered that the town of Joseph itself has become a mecca for sculptors and other artists of all kinds.

The town is named for Chief Joseph, the leader of the Nez Perce tribe at the time that the Nez Perce were forcibly moved to Idaho from their homeland in the Wallowa Mountains. He was a peaceful and eloquent leader, and his many pleas for fair racial treatment — made shortly after the Emancipation Proclamation — were sadly met with deaf ears. He ultimately led his tribe in a run for Canada in hopes of obtaining political asylum for his people, but the U.S. Army was hot on his heels, and he eventually surrendered. 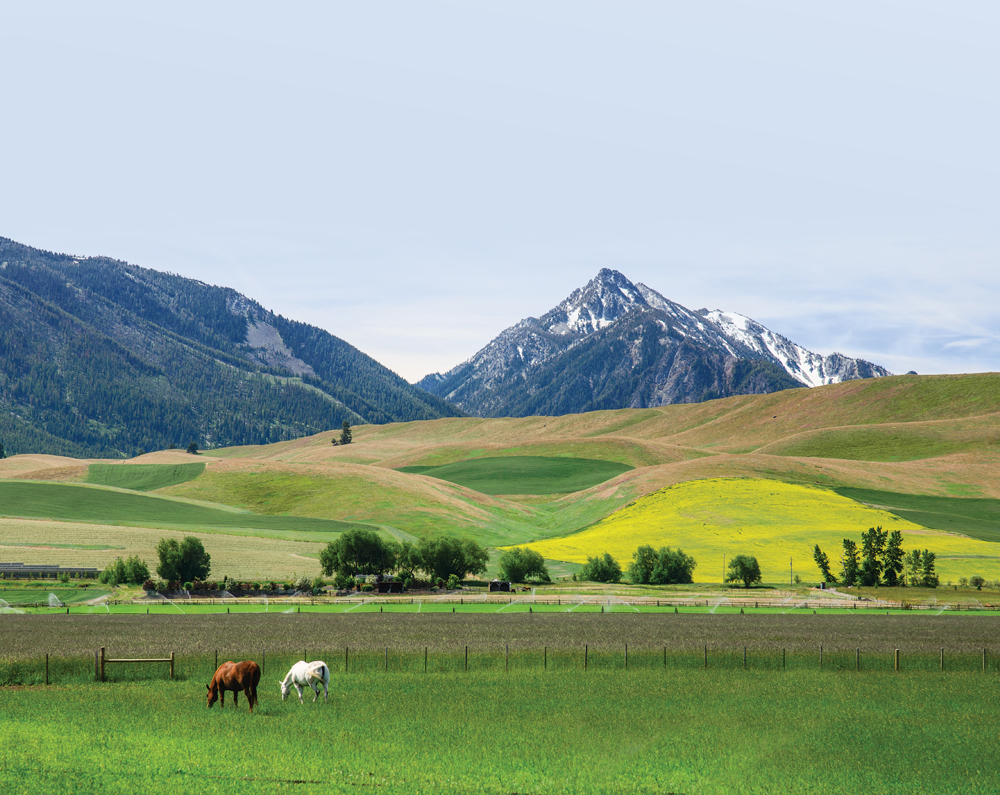 The Wallowa Mountains create a stunning backdrop to the rolling farmland outside Joseph, Oregon.

A regal bronze sculpture of Chief Joseph, created by artist Georgia Bunn and cast by Valley Bronze, was purchased by Christy Walton, daughter-in-law of Walmart founder Sam Walton, and donated to the town. Other vivid bronze depictions of Sacagawea, a cowboy on a bucking bronco and a soaring eagle also grace the streets, each surrounded by vibrant, multicolored beds of flowers.

For outdoorsy folks, lots of excellent hiking trails wind through the Wallowa Mountains. Our favorite was the Hurricane Creek Trail a few miles outside of Joseph. After fording a rather intimidating looking stream by walking across an enormous fallen tree, the trail took us through the woods past colorful meadows filled with wild­flowers and backed by mountains. After a bit of a climb, we eventually came to a waterfall.

The trail continued past the falls, but we had gotten so caught up in enjoying the views and taking photographs in the meadows that it was late in the day and we decided to turn back. A quick stop at Terminal Gravity Brewing in Enterprise for delicious local beers and burgers at a picnic table under the shady embrace of some wide trees was the perfect way to end a great day of hiking.

Where to Stay in the Wallowas

Although it’s sparsely populated, the route from Baker City to Joseph in northeastern Oregon has plenty of places for intrepid RVers.