Like many baby boomers, my husband, George, and I have reached an age where we are filling gaps in our life experiences. For me, Theodore Roosevelt National Park in western North Dakota was a glaring gap.

In all my years in the outdoors, and in writing about the outdoors, I’ve crossed the paths of, and paid tribute to, various icons in the field of conservation and preservation: John Muir, Rachel Carson, Henry David Thoreau and Stephen Mather. But I had yet to visit the national park named after Theodore Roosevelt, who as statesman and president swelled our national coffer of parks, forests, monuments and wildlife refuges more than any other leader.

I corrected the oversight last fall.

Theodore Roosevelt National Park encompasses the North Dakota badlands that captured the imagination and spirit of the man who would become the Father of Conservation. He arrived in his tender 20s to hunt buffalo. He returned a year later to grieve and take strength from the land, after the sudden deaths of his wife and mother but hours apart. He’d later stay and try his hand at ranching. Roosevelt’s experiences in this remote region forged a deep-seated respect for land and wildlife that fueled his urgency to preserve and protect both. 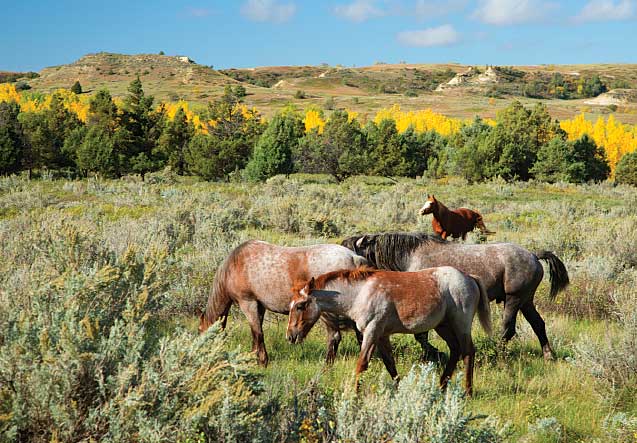 The South and North units, though, amply satisfy curiosity. Each holds a campground. Juniper Campground, 5 miles from the North Unit park entrance, has 50 dry camping sites, and is open year-round on a first-come, first-served basis. Cottonwood Campground is located 6 miles from the South Unit park entrance and has 76 dry camping sites, half of which are reservable. Nearby Sully Creek State Park, outside Medora, also has a campground (no hookups) open April through November. Private campgrounds can be found in Medora and Watford City. Fall is a glorious time to visit, coloring the cottonwoods yellow, but it puts visitors in the park for the winter shutoff of piped facilities. Wind, shaper of this land, can be a player anytime. 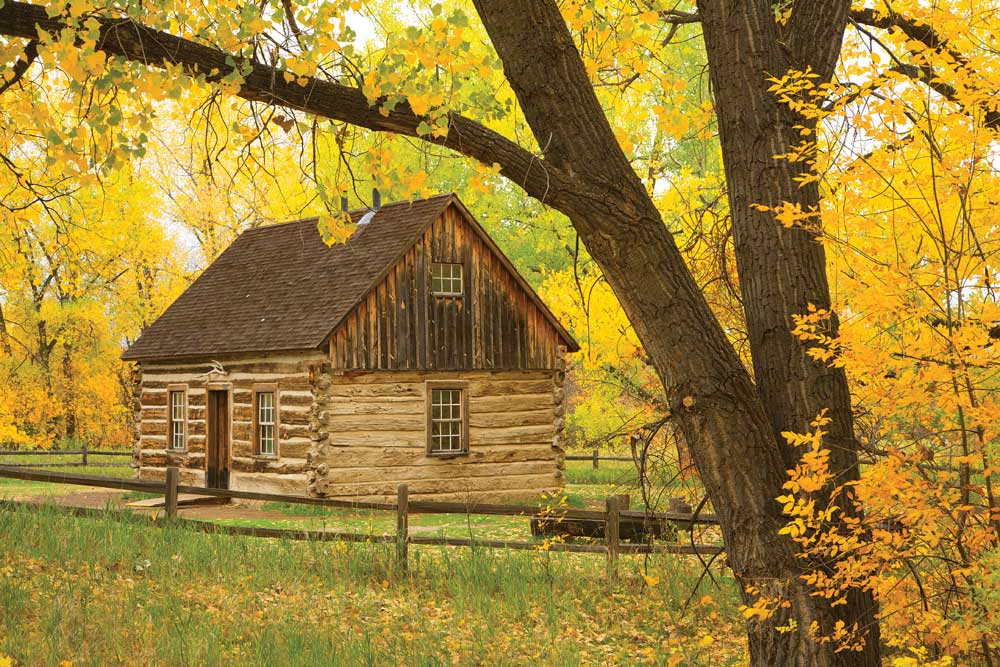 Rustic beauty prevails at the South Unit’s Maltese Cross Cabin, where Roosevelt first stayed. It is located out the back door of the park’s primary visitor center/museum.

Off Interstate 94, 25 miles east of the Montana border, the small town of Medora serves as gateway to this site. The South Unit houses the park’s primary visitor center/museum. Out its back door sits the relocated and restored Maltese Cross Cabin, where Roosevelt first stayed. The cabin interior looks as it might have back then, including a writing desk and a trunk.

The center offers maps and brochures and dispenses information on current conditions. The museum reacquaints visitors with the character and history of Theodore Roosevelt, and with the park itself. A bullet-pierced T-shirt recalls the assassination attempt on Roosevelt during a campaign speech as the Progressive Party presidential candidate. Despite the injury’s severity, he delivered the speech.

You meet the South Unit by driving its paved 36-mile scenic loop. It is suitable for RVs, though you need to heed bends and hills and park only on established, hardened turnouts. The rolling route travels past viewpoints, trailheads, the picnic area/campground complex and an old ranch, as it celebrates wind-plaited grasslands, banded badlands, juniper forests and the Little Missouri. 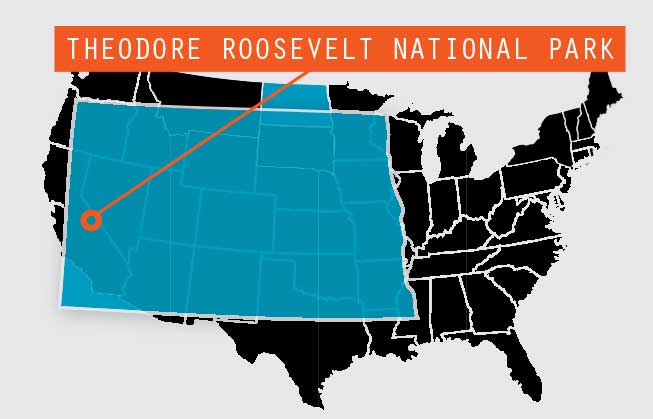 Getting There: The park is comprised of three distinct areas. The South Unit entrance is next to the town of Medora, which is accessible via Interstate 94, exits 24 and 27. The North Unit entrance is on U.S. Highway 85, approximately 14 miles south of Watford City. Travelers on I-94 can access U.S. Highway 85 at Exit 42 in Belfield. The Elkhorn Ranch Unit requires a high-clearance vehicle and is located 35 miles north of Medora. Access to the site is via gravel roads.

With so much to see, we drove the loop in both directions and on multiple days, finding new perspectives and encounters. For planning purposes, the lone picnic area is at Cottonwood, with toilets at Cottonwood, Peaceful Valley Ranch and a turnout in the Buck Hill – Coal Vein Trail area.

Morning and late-day light casts magic on the land, amplifying the color, depth and character, while shadow and focused light single out features in the bumpy wonderland of clay. We listened to the bugles of elk; watched bison, deer and elk ford the river; and thrilled at the feral horses (descended from stock of early failed ranches), as they ran, romped and reared up in clouds of dust. Bald and golden eagles, hawks and vultures pointed eyes skyward.

In prairie dog towns, alarm, real or imagined, set forth prairie dog waves. First, one fat chap would arch back, forelegs stretched skyward, releasing a high-pitched squeak, to be answered in turn by a second, third, fourth and fifth little wavemaker. In another village, the order of the day was mound maintenance, with the critters feverishly digging and then bulldozing the loosened dirt with their chests before jack-hammering the excavated material into place with their flat heads. 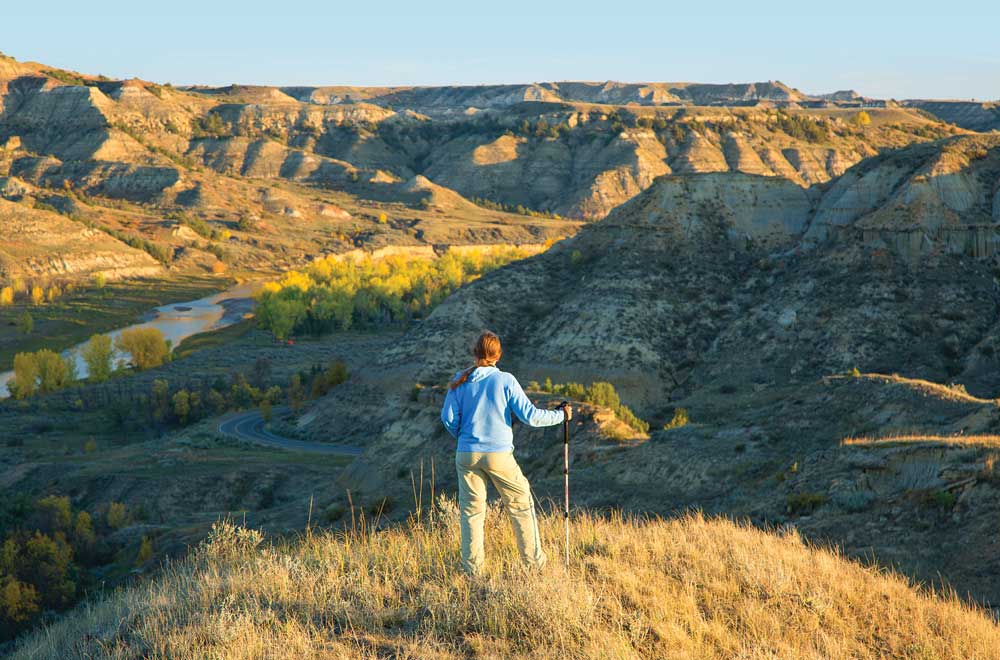 Coyotes stalked the edges of towns, sometimes with no intent, other times with deliberate speed, reducing the prairie dog population. Town survivors showed little concern, gossiping and darting about duties. Magpies, though, attempted to share in the spoils.

For scenic vistas, Wind Canyon Trail beckons a stop. A half-moon trail ascends to the vantage rim, overlooking the sliver that is Wind Canyon, as well as a showy bend on the Little Missouri, popular for sunset photography.

A peek in the door at Jones Creek Trail puts visitors up close to the scenic bumps of the prairie. One need not walk far for reward. Boicourt Overlook and Trail contribute still more stunning basin views. Bison trails weave among the rises, the black woollies familiar sights. For a quick uphill charge, Buck Hill extends an easy ridge stroll for varying badland perspectives. 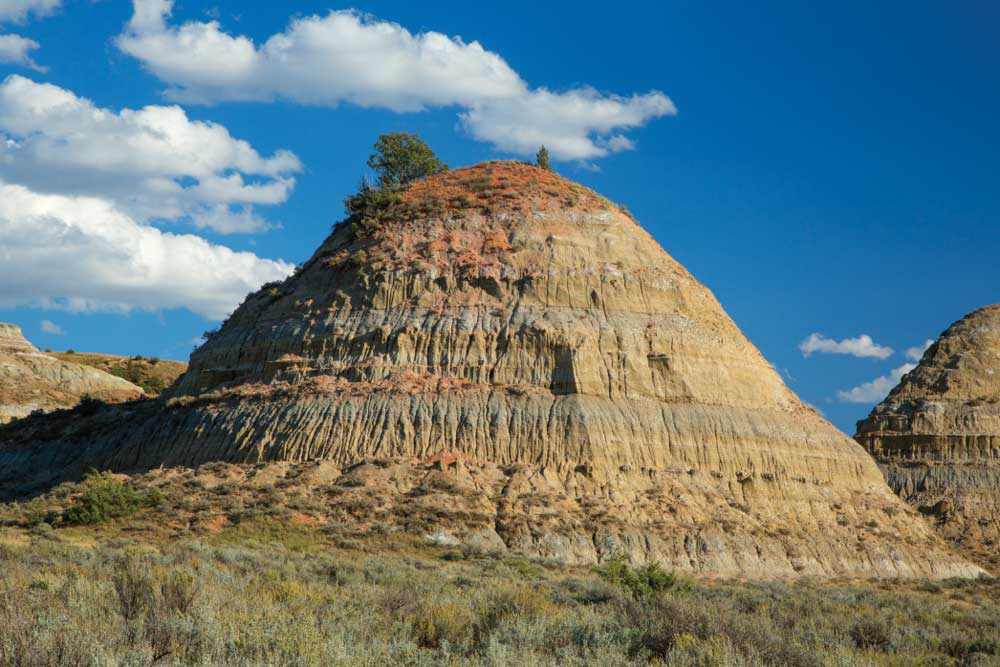 Badlands, like these near the Old East Entrance Station in the South Unit, are the result of softer sedimentary rocks and soil eroded by wind and water.

Some clay hills show strong black coal bands. Coal Vein Trail offers a geologic walk to one. Veins can and have burned upward of 20 years. It is said, early visitors roasted marshmallows in the hot seams.

The national park’s Painted Canyon Visitor Center and Rest Area, east of town on Interstate 94, offers trails and a badland overlook of red capped hills. Look for deer and feral horses in the badland shadows. 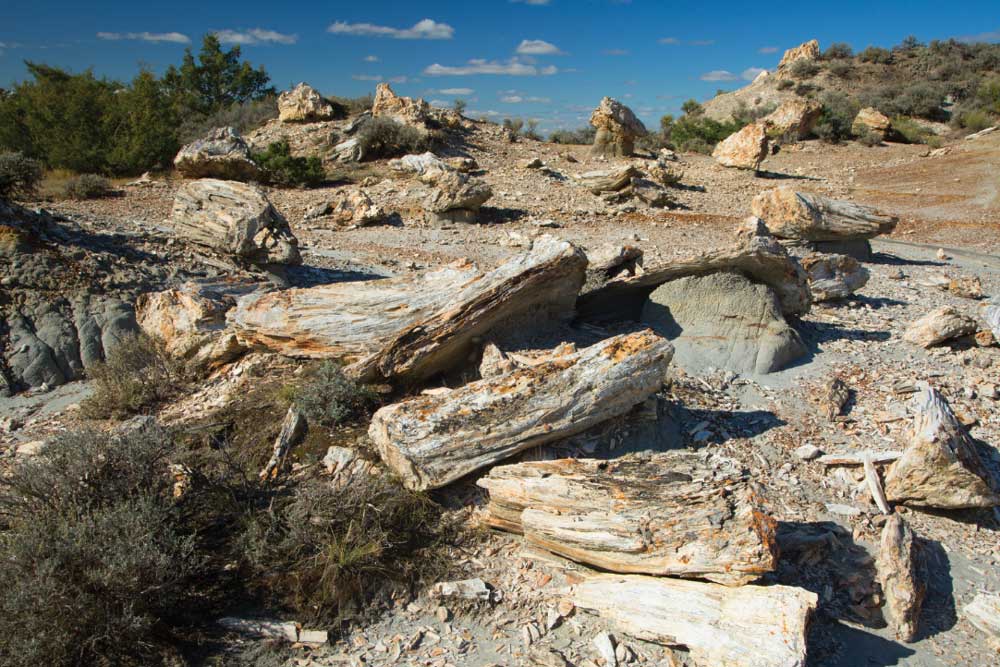 Petrified wood can be found along the North Petrified Forest Trail in the park’s South Unit.

Fourteen miles south of Watford City, off U.S. Highway 85/North Dakota 200, this unit has but a small visitor center where a ranger fields questions. Park discovery comes driving the linear, paved 14-mile Scenic Drive (28 miles round trip). Again, the route is suitable for RV travel, with attentiveness to conditions. Save for a chemical toilet at the entry, Juniper Campground has the lone facilities. 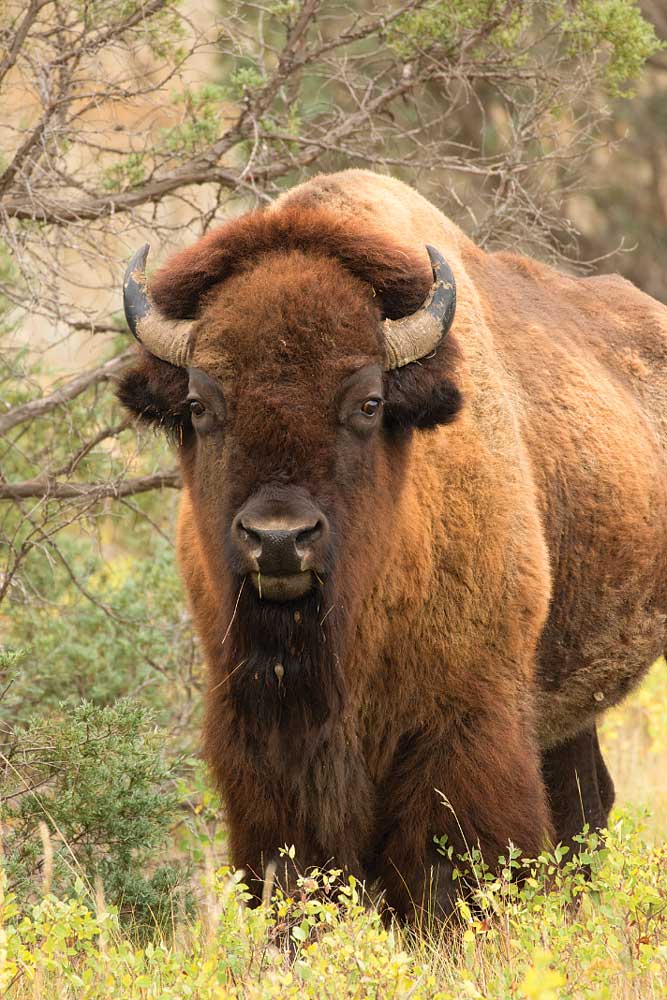 Frequent wildlife sightings are the norm, including this bison in the North Unit

From Juniper Campground, the Little Mo Nature Trail visits the river and cottonwoods. The woodland greets with a vibrant spreading canopy dispersed by snags, while the river is muddy and wandering. Below the clay cliffs across from camp, look for the aptly named cannonball rocks.

Although the unit has fewer viewpoints than its southern counterpart, they are rewarding. The short trail at River Bend Overlook leads to a viewing deck and an old Civilian Conservation Corps vista shelter. The duo extends impressive views of the wending river, treed riparian and Caprock Coulee. On its own merit, the historic shelter wins fans and photos.

Oxbow Overlook, at road’s end, delivers a dramatic grand-finale view of the badland basin. Sperati Point Trail builds on the climax, offering a ridge vantage 150 feet higher than the overlook, for a 1.5-mile hike.

As in the South Unit, wildlife sightings are frequent and often lingering. Bison, deer, elk and coyote drew study. But the unit’s bighorn sheep eluded us. A few locals stopped to ask us if we’d seen the “mulies” (mule deer). We had. Dozens of them. The unit’s small herd of longhorn cattle kept from sight until we were leaving the park. These nods to the free-range days on the badlands grazed in the sage-grass prairie by the interpretive sign devoted to them.

As always in wildlife watching and photography, grant animals plenty of space and back away if you see signals of distress or irritation. This is their home. 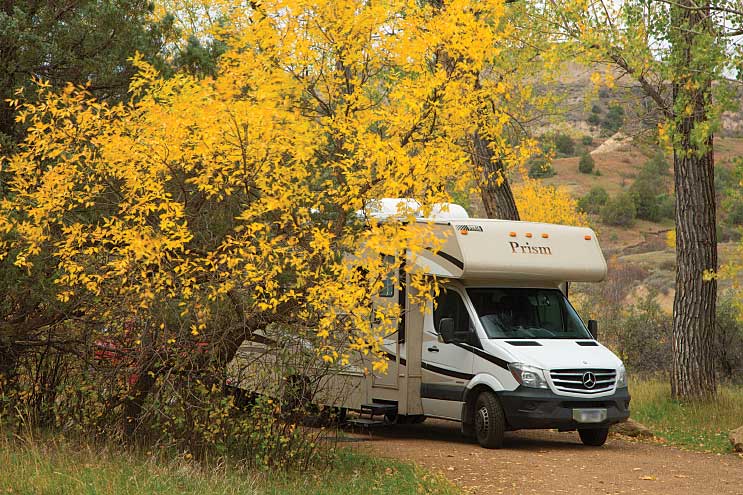 Roads are suitable for motorhomes, but drivers need to be alert.