The name “Hangtown” was enough to pique my interest. To learn more about this location, I ran it in my internet browser and found a map showing a historically important gold-rush town (now officially named Placerville) nestled in the hills of the Mother Lode – a name historically given to a section of gold deposits in California’s Sierra Nevada. Considering the area’s rich history, my wife, Gayle, and I decided that it would be well worth a visit.

Though it only has a population of around 10,681, the number and variety of attractions to be found in and around Placerville will be a pleasant surprise to visitors. Whether going for a week or a weekend, young and old alike should have no problem finding plenty of fun things to do. Some of the things we wanted to do were to learn about the area’s history, see unusual work created by resident artisans, visit some of the many boutique wineries in the surrounding hills and sample the local cuisine that we’ve heard so many good things about. 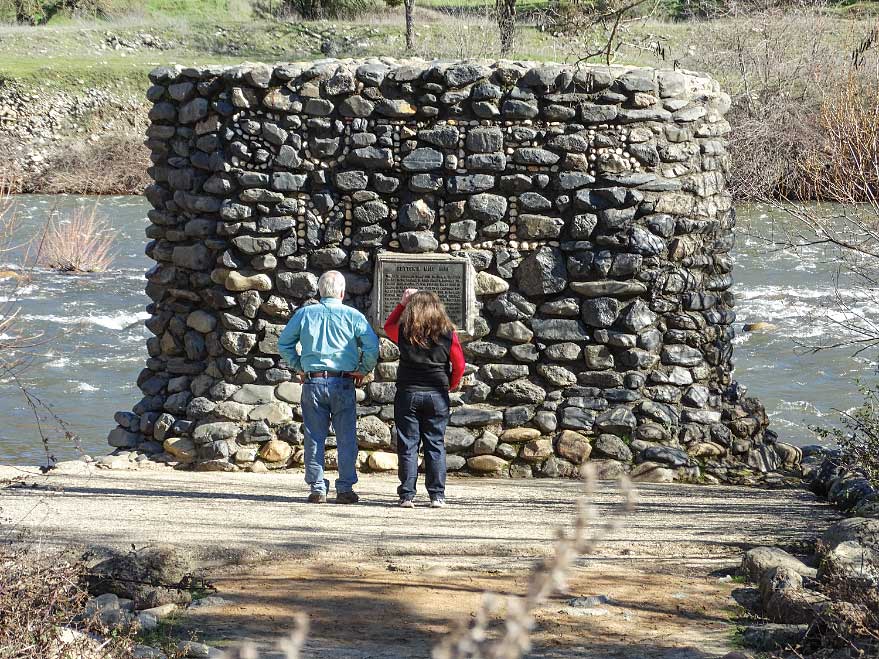 Traveling in a 35-foot motorhome with a dinghy vehicle, we always try to stay in a campground reasonably close to our primary points of interest. We chose Ponderosa RV Resort, which is located where California State Route 49 crosses the South Fork of the American River, about 10 miles north of Placerville. The RV park is also within walking distance of where gold was first discovered in California, at Sutter’s Mill. That finding led to the gold rush that altered history throughout much of the world.

Other RV parks can be found in the area, including a few along the river. But we haven’t discovered any that, in our opinion, can match the experience afforded by the riverfront sites at Ponderosa. For example, while listening to the nearby rapids from our chairs, we were able to watch a river otter in search of fish just below us, and see deer grazing on the far bank. 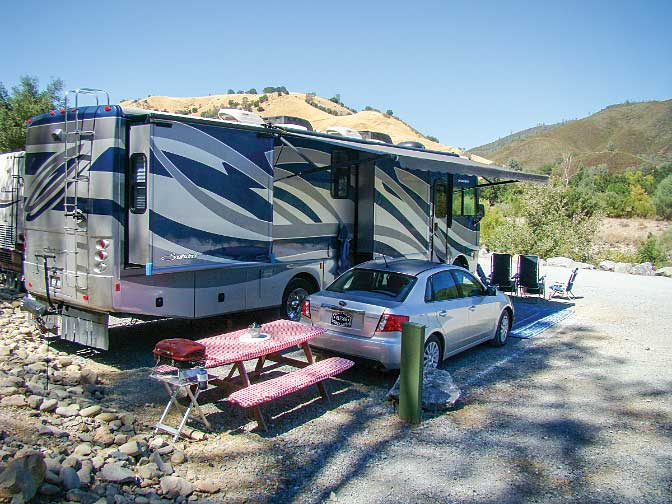 The discovery of gold by James Marshall at Sutter’s Mill, along the South Fork of the American River, figures prominently in the history of Hangtown. Therefore we began our quest for knowledge by walking into the little town of Coloma, where a replica of Sutter’s Mill is now included within Marshall Gold Discovery State Historic Park.

Visitors can easily spend most of the day on a self-guided tour, but the park also offers Gold Discovery Guided Walking Tours at 11 a.m. and 1 p.m. daily, with the exception of special-event days. Either way, those who take the time to see the park’s many exhibits should come away with at least a basic understanding of how the gold rush changed the course of history, while radically impacting the surrounding area. 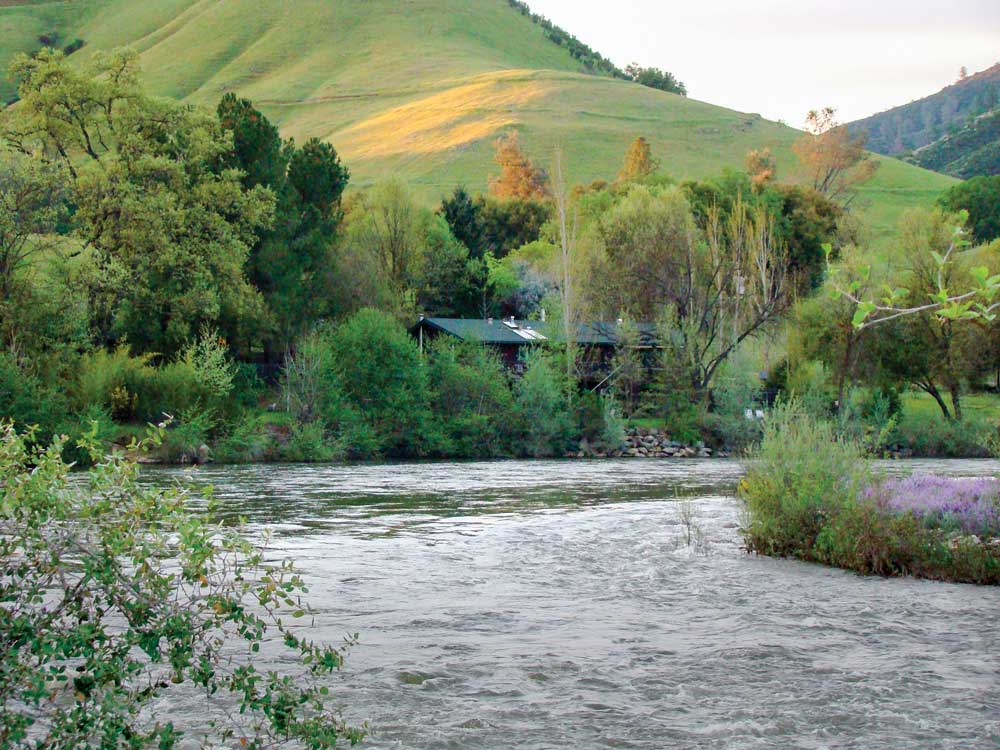 A view from one of the riverfront campsites at Ponderosa RV Resort.

Next on our to-do list was a visit to downtown Placerville, especially the historic part through which Main Street runs. We began with a stop at the El Dorado County Chamber of Commerce and the Fountain & Tallman Museum. The museum is basically one small room of exhibits pertaining mostly to Hangtown/Placerville, but the Chamber of Commerce has a wealth of information about most anything of interest in all of El Dorado County. Either place can supply a pamphlet with the information needed for a self-guided walking tour of the five-block historical section. Plaques affording additional information are posted at each listed location. Naturally, we sought out more details about how and why the town was once known as Hangtown.

After news spread about the discovery of gold at Sutter’s Mill on January 24, 1848, thousands began arriving from all over the United States, and even from abroad. People from all walks of life wanted to make their fortune in the area’s streams and hills.

Merchants and others hoping to profit from the miners soon followed. The “gold rush” was born, and by 1849 it was going full bore.

It has been estimated that at least 39,000 people arrived in California by sea, and another 42,000 via overland routes, by the end of 1849. Though Coloma was the initial rendezvous point for those who became known as “Forty-Niners,” camps soon sprung up elsewhere in the area, including what eventually became known as Hangtown (where an estimated 10,000 settled). What is now State Route 49 follows approximately the same course as the trail used by miners – and the merchants who supplied them – as they moved between Coloma and Hangtown. But mining was hard work, and not everyone was willing to do it for long. Some resorted to stealing gold from others, resulting in many robberies and even some murders.

Before the name Hangtown was applied to the camp, it was referred to as Old Dry Diggins (because the miners had to cart the dry soil to running water for washing out the gold). Details seem to vary by some accounts, but in 1849 an impromptu jury met there to decide the fate of three accused murderers. After a trial that lasted about 30 minutes, someone reportedly shouted “Hang them!” Up to 1,000 miners gathered, and the sentence was carried out. Those first known hangings in the Mother Lode were carried out at a giant white oak near the center of the camp (where Coloma and Main streets intersect today).

Word spread rapidly, and other hangings were later carried out at the same place. The location soon became known as Hangtown. Only the stump of that tree is still in existence: located in the cellar of what is now the Hangman’s Tree Ice Cream Saloon (where California Historical Landmark No. 141 is posted). In 1851 the legislature of the newly formed state passed a bill establishing the death penalty for anyone who stole property worth more than $100, which helped legitimize hangings.

By 1854, Hangtown was the third-largest town in California – behind only San Francisco and Sacramento in total population. Los Angeles, at 15th place, had a population of only 541 voters. That same year, Hangtown was incorporated and renamed Placerville. The name was chosen for the deep-reddish-brown soil that the gold was mined from. Some of the methods used included excavating pits, digging tunnels and hydraulics (eroding the soil by shooting large volumes of water under high pressure).

Many fortunes were made. Merchants from near and far flocked to the rapidly expanding town. Supposedly as late as 1903, enough gold was found while digging the foundation at the Fairchild Building to finance its construction, including Fairchild’s Pharmacy. The financial impact on the region, and the state, was profound. Placerville became a major financial hub. It was also the western terminus for the Overland Trail.

Still a robust community today, Placerville also serves as the El Dorado County seat. Through a variety of attractions and sponsored activities that are put on within the historical section throughout the year, people can now visualize what it was like during that wild period. Though terrible fires tore through and destroyed most of the historical section, visitors can still see buildings of stone or brick that were constructed as early as 1852.

Some additional facts that really impressed us had to do with the hardy nature of the females who came to live in the area. In 1850, Lucy Wakefield traveled all the way from Connecticut, and bought a log cabin on Main Street. She baked and sold mince pies for $2 and made a very profitable business out of it. Also, Jane Johnson drove a herd of horses West in 1859, then used the proceeds to purchase a lot and have a building constructed near the center of town.

After having learned about the town’s history, we visited several shops along Main Street that display and sell a wide variety of arts and crafts created by local artisans. One of those was Gold Country Artists Gallery. It is a co-operative that purports to have work on display from 50 individuals in the area. Those who display their work either belong to the co-op or rent space. A wide variety of displays can be found on two levels, including photography, paintings, glass art, jewelry, fiber arts, pottery, stained glass, dye etched metal and many other unique works. Though we were most impressed with the variety and number of displays there, we encountered many more shops throughout the historic district that display work from local artists.

Near the east end of the historical section, we discovered a unique restaurant that should not be missed. It’s named Sweetie Pies Restaurant & Bakery www.sweetiepies.biz and is open daily for breakfast and lunch. The building was constructed in 1865 and was reported to be home for the sheriff of Hangtown. The restaurant was established in 1991, and has been voted Best of El Dorado County every year since. You have to try the olallieberry pancakes and syrup. But bring an appetite: the pancakes are the size of dinner plates. We bought some of the olallieberry syrup to take home because it was so good. 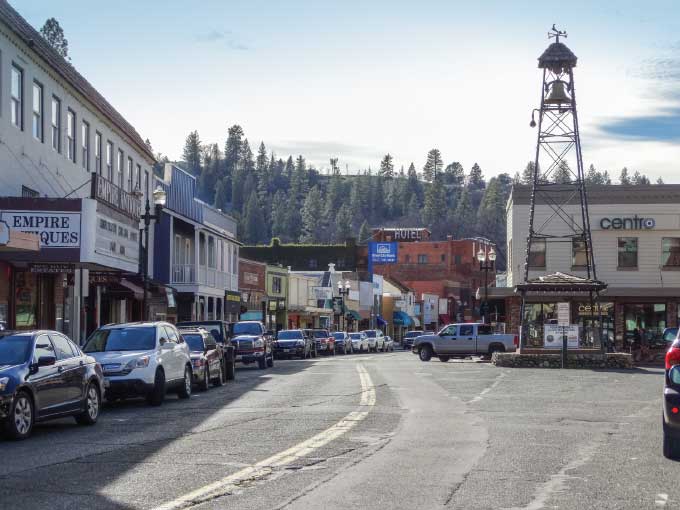 During our research, we learned that there are approximately 70 wineries in El Dorado County. Most of those are clustered in the hills to the east and south of Placerville; many clustered on both sides of Highway 50 heading toward Lake Tahoe, and some near Camino and Fair Play. Nearly all of them are small, independently owned boutique-style wineries.

Gayle and I have discovered some outstanding wines by visiting similar locations, and have gained a lot of knowledge about them during the process.

Apparently the nearby hills support the growing of grape varieties used in some renown wines originating in certain parts of Italy, France and Spain. Many seemed to specialize in Rhone varietals, Tempranillo, Barbera and the like. Unfortunately, we had to cut our trip short because the area was in danger of flooding, so we didn’t get to visit any wineries. That will have to wait for a future trip. For those who are interested in going, you can obtain a comprehensive pamphlet describing each – and showing their location on a map – by visiting the Chamber of Commerce Visitor Center on Main Street in Placerville.

Between Shingle Springs and Placerville, just off Highway 50, is one of the best casinos we’ve ever visited. The Red Hawk Casino www.redhawkcasino.com is owned and operated by the Shingle Springs Band of Miwok Indians. For those who are inclined to check it out, we found the entire experience very worthwhile. In addition to gaming, they have several restaurants – the Mexican cuisine at the downstairs Koto restaurant was outstanding.

Unfortunately, we missed out on several fun attractions offered within the historic parts of Placerville. Among those we hope to enjoy in the future include, “Wagon Train on Main” (June), “Bell Tower Brewfest” (June) and the “Art and Wine Festival” (October). Monthly offerings include Stagecoach Rides and the Placerville Art Walk. And, of course, on our next visit we will visit some of the area’s fine boutique wineries.