If you come to Flagstaff, the largest city in northern Arizona, expecting a quintessential Arizonan experience, you may be in for a surprise. You’ll see more mountains than desert, more ponderosa pine forests than cacti. At nearly 7,000 feet in elevation, the average high temperature in July is a balmy 82 degrees compared to a sizzling 106 in Phoenix. Snowbirds fleeing the wintry conditions in northern states can find snow at the nearby Arizona Snowbowl, which delights skiers with an average annual snowfall exceeding 240 inches. Flagstaff is a popular year-round destination. 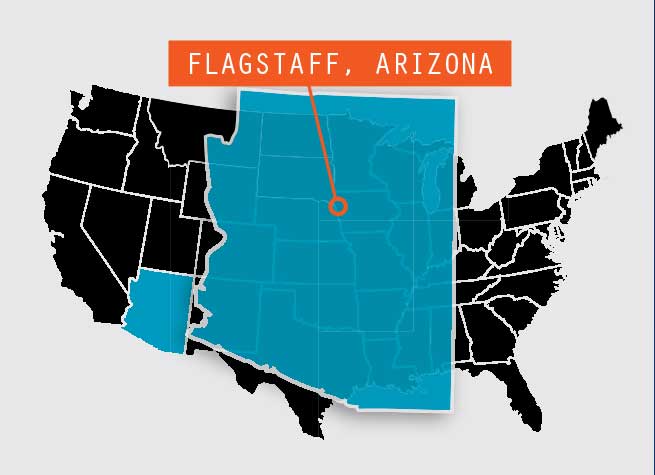 Get Your Kicks: Flagstaff is a popular stop along Historic Route 66. Brochures for self-guided walking tours are available at the city’s visitor center, or to download

Little did my husband, Jim, and I know when we arrived in late September that we were just in time for “The Best 10 Days of the Year,” otherwise known as the Flagstaff Festival of Science. The theme for 2016 was “The Science of Change.” More than 100 free activities are offered, including guided hikes, tours of archaeological sites, lectures, family-friendly events and the Flagstaff Star Party.

The Star Party was held for three evenings at Buffalo Park, with more than 25 amateur and professional astronomers sharing their telescopes with the public. We looked at the Hercules Globular Cluster, with its more than 300,000 stars, through a 20-inch telescope. Flagstaff is famous for its dark, starry skies. In 2001, it was named the world’s first “International Dark-Sky City.” The International Dark-Sky Association gives this designation to cities “with exceptional commitment to and success in implementing the ideals of dark-sky preservation and/or restoration, and their promotion through quality outdoor lighting.”

The skies were even darker in 1894 when Percival Lowell established the now-famous Lowell Observatory to search for evidence of life on Mars. Jim and I took a tour and learned about several notable discoveries at the observatory. In 1912, Vesto Slipher was the first to provide an empirical basis for the notion of an expanding universe. In the late 1960s, Vera Rubin provided evidence that “dark matter” makes up the bulk of the universe. Lowell Observatory’s most famous discovery occurred in 1930 when Clyde Tombaugh discovered Pluto, originally thought to be the ninth planet in our solar system. He spent thousands of hours comparing photos of the night sky looking for an unidentified moving point of light that might be a planet. Pluto was downgraded to a dwarf planet in 2006. Our tour guide and Flagstaff native, Kevin, noted that he was torn between “the hometown pride of locals who didn’t want Pluto to be demoted” and his desire to see scientific advancements. NASA paid a unique tribute to Pluto’s discoverer when it launched the New Horizons spacecraft in 2006 with a portion of Tombaugh’s ashes aboard. After traveling 4.67 billion miles, New Horizons flew within 7,800 miles of Pluto in 2015. 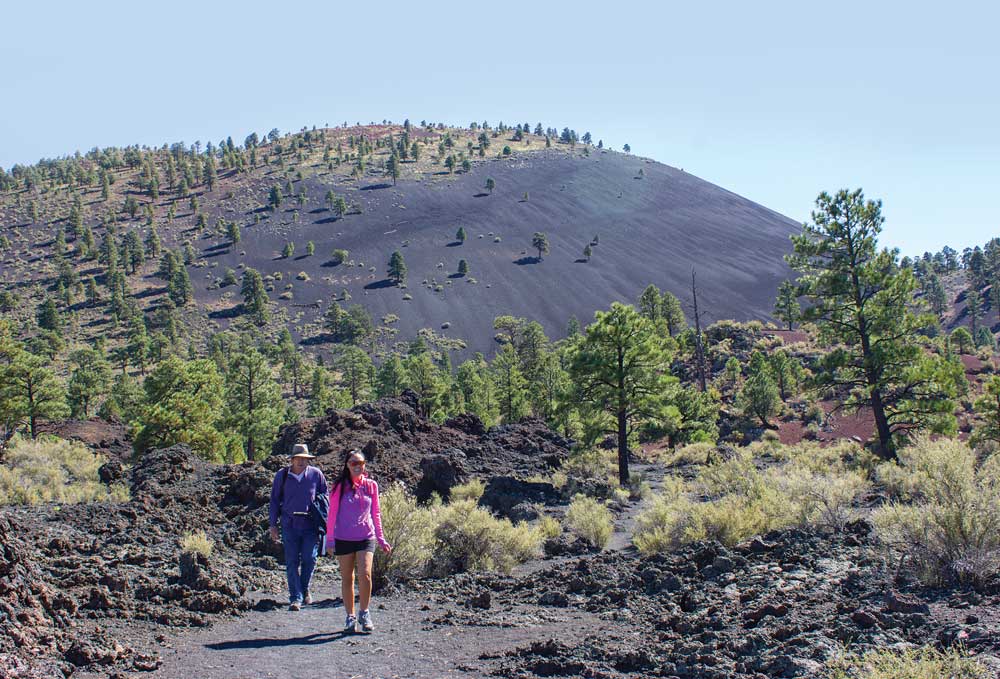 A chance encounter with volcano enthusiast Cassie Lentz made our hike through Sunset Crater Volcano National Monument even more enjoyable.

Three national monuments are less than 45 miles from Flagstaff. All of them were hosting open houses as part of the Festival of Science. We started the day at Sunset Crater Volcano National Monument. This volcano erupted less than 1,000 years ago (between 1040 and 1100), making it one of the youngest lava flows in northern Arizona. I was disappointed that we couldn’t get reservations for the guided hike, but then we met a young woman at the trailhead whose keen interest in volcanoes made me happy to have missed the official hike. Cassie Lentz was in the middle of a solo five-month, 22-state, 38,000-mile road trip to travel the U.S. and hike as much as possible. She’s been obsessed with volcanoes since middle school. A highlight of her adventure was the eight volcanic sites she hiked. Because of her infectious enthusiasm about volcanoes, we saw this marvel of nature in a new light as we hiked the trails in the park with her. 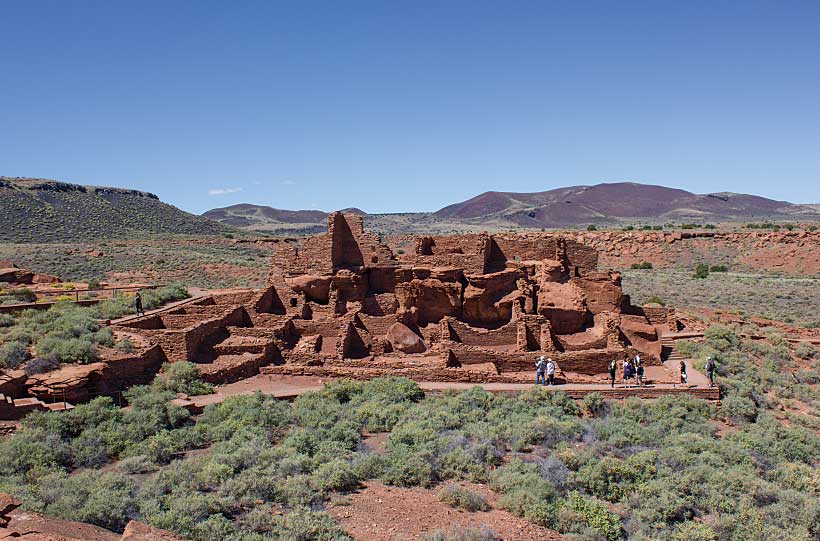 The Wupatki Ruins Complex at Wupatki National Monument includes a dwelling with more than 100 rooms, a community room, a ball court and two kivalike structures.

From Sunset Crater Volcano, Jim and I drove the 34-mile scenic loop to Wupatki National Monument. Leaving the ponderosa pine forests, we dropped nearly 2,000 feet into the high desert. In the century following the Sunset Crater eruption, an estimated 2,000 people moved into this area. The land was covered with a thin layer of volcanic ash, which improved the soil’s ability to retain water and grow maize and squash. By 1180, Wupatki Pueblo was home to as many as 100 Ancestral Puebloans, with several thousand more living within a day’s walk. By 1250, the area had been abandoned, perhaps due to an extensive drought or overutilization of natural resources. The Wupatki Ruins Complex includes a dwelling with more than 100 rooms, a community room, a ball court and two kivalike structures. Wupatki Pueblo is the largest of the five pueblos on the national monument, which covers more than 55 square miles. 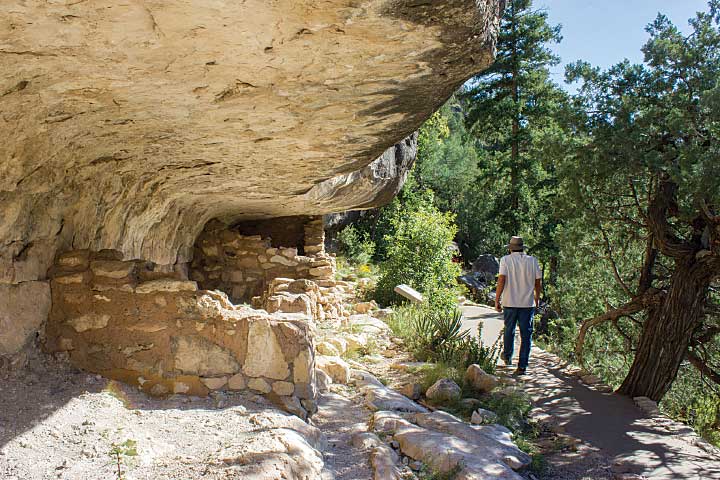 The paved 1-mile Island Trail in Walnut Canyon National Monument passes by 25 cliff dwellings that were inhabited more than 700 years ago by the Sinagua.

Walnut Canyon National Monument was our last stop of the day, located less than 10 miles from our RV park. We descended 185 vertical feet into the canyon on several sets of stairs to hike the paved 1-mile Island Trail. This led us past 25 cliff dwellings that were inhabited more than 700 years ago by the Sinagua (The name translates to “without water.”). Walnut Creek flowed intermittently, requiring them to become adept at conserving water and dealing with drought. They grew crops of corn, squash and beans on the canyon rim. We walked through this area on the Rim Trail, an easy 0.7-mile round trip. From two canyon overlooks, we could see several ruins. 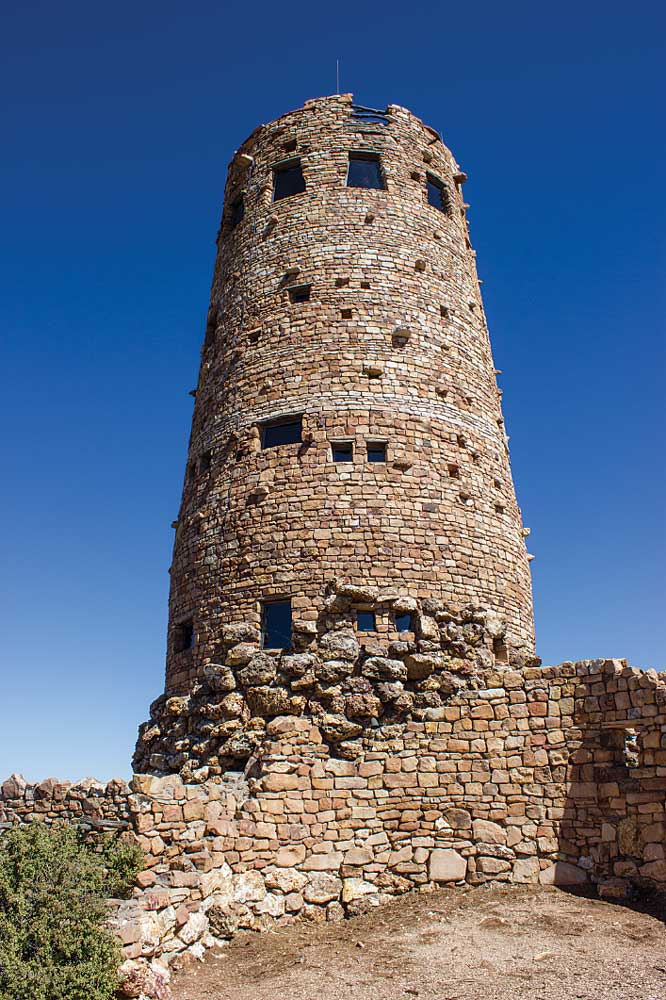 We devoted an entire day to exploring Grand Canyon National Park, less than 80 miles from Flagstaff. In that one day, we saw only a fraction of the park that covers 1,900 square miles. The canyon itself is 277 miles long, up to 18 miles wide and more than a mile deep at its deepest point. The Colorado River carved the canyon through erosion over 5 to 6 million years. Near the East Entrance, we climbed to the top of the Desert View Watchtower for an even more spectacular view of the canyon. The 70-foot-high circular building designed by architect Mary Colter was completed in 1932. Interior murals painted by Hopi artist Fred Kabotie tell Hopi history through images of their mythology and religious ceremonies and prehistoric pictographs and petroglyphs. From there we drove to the Grand Canyon Visitor Center, stopping at several overlooks en route. At the visitor center, we watched a short film about the Grand Canyon and studied the exhibits. Mather Point, an overlook with spectacular views of the immense canyon, was crowded with American and international visitors. We overheard many conversations in languages we couldn’t understand. To some English-speaking tourists I commented about the overwhelming beauty of the colorful, steep canyon; to everyone else I offered a welcome-to-the-U.S. smile. 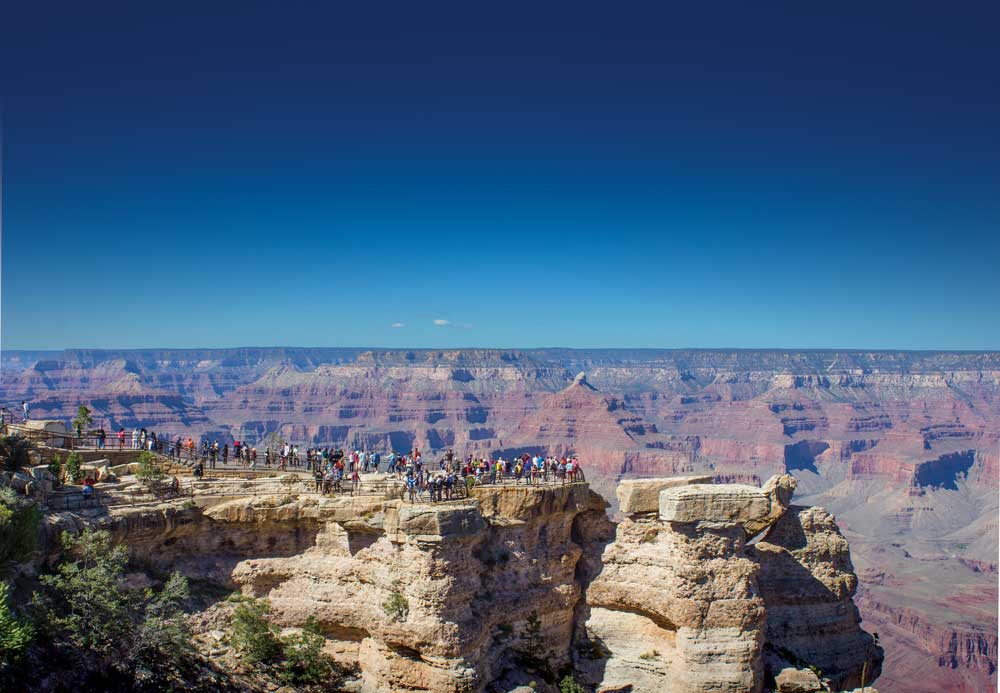 Mather Point, a short walk from the Grand Canyon Visitor Center on the South Rim, is a popular overlook.

Things to do in Flagstaff

The Museum of Northern Arizona

Our remaining days were spent exploring attractions in or near Flagstaff. The Museum of Northern Arizona sits on 200 acres. In addition to the exhibit building, there are research labs and collection facilities. Their collection includes Native American artifacts, natural science specimens and fine-art pieces. The mission of the museum, founded in 1928, is “to inspire a sense of love and responsibility for the beauty and diversity of the Colorado Plateau through collecting, studying, interpreting, and preserving the region’s natural and cultural heritage.” The Colorado Plateau covers 130,000 square miles in Arizona, Utah, New Mexico and Colorado. Permanent exhibit galleries include items as diverse as skeletal casts of dinosaurs, pottery, jewelry, textiles, sculptures and paintings. The museum also hosts an interesting assortment of temporary exhibitions. We were fortunate to see “Curt Walters: A Retrospective.” More than 30 realistic landscape paintings on display made it clear why Art of the West magazine declared Walters the “Greatest Living Grand Canyon Artist.” After visiting the galleries, we hiked the Rio de Flag Nature Trail on the museum’s property, carefully avoiding the poison ivy that grows along the creek.

Riordan Mansion was built in 1904 for two brothers, Timothy and Michael Riordan, who married sisters, Caroline and Elizabeth Metz. The Arts and Crafts-style 13,000-square-foot mansion is actually two nearly identical homes connected by a rendezvous room. In 1983, the Riordan Mansion and the 5 acres surrounding it became a state historic park. We took a guided tour of the East House, which contains handcrafted furniture, original artifacts and personal items belonging to the Riordan families. When our tour ended, we explored the exhibits on the first floor in the West House. The Riordans owned a successful lumber mill, and were instrumental in the development of Flagstaff. They were also involved with railroads, cattle, banking and politics.

On Sunday, Jim stayed in the motorhome to watch a football game while I explored The Arboretum at Flagstaff, located on 200 acres in the Coconino National Forest. Initially founded as a nonprofit research facility, the arboretum specializes in plants native to the Colorado Plateau and northern Arizona. More than 750 species of plants are grown here in greenhouses, gardens and natural habitats. Free docent-led tours are offered at 11 a.m. and 1 p.m. Since I missed both tours, I wandered the grounds on my own. In late September, most of the gardens were no longer in bloom, but I thoroughly enjoyed my visit to the Butterfly House and a hike on the Nature Trail in a ponderosa pine forest. The Arboretum at Flagstaff is open daily (except Tuesdays) from April 15 to October 31, and on weekends from mid-November to early December for the Festival of Trees. The best time to see flowers in bloom is the first week of August. Butterflies are at their peak in June and July. Special events throughout the season include concerts and festivals.

After picking up the Flagstaff Urban Trails and Bikeways Map, Jim and I were eager to do a bike ride before we left town. The Flagstaff Urban Trails Systems (FUTS) is a citywide network of nonmotorized, shared-use pathways that are used by bicyclists, walkers, hikers, runners and other users for both recreation and transportation. There are currently 55 miles of trails, with plans for 80 more. We parked our dinghy on Ponderosa Parkway and rode our bikes north on the Arizona Trail to Buffalo Park. We enjoyed returning to the site of the Star Party, and seeing the open terrain in daylight.

We stayed at the J & H RV Park, just a few miles northeast of Flagstaff on U.S. Highway 89. It had everything its website promised: level sites, beautiful landscaping and a quiet location away from railroad and traffic noise. I was curious about its claim that, “Our warm hospitality and humor have helped us attain the prestigious ‘National RV Park of the Year’ award.” Harvey was friendly and helpful when we checked in, but it wasn’t until we were leaving that I understood how they got that award. For the first time in 14 years of RVing, we got a thank-you note from our hosts taped to our door. Thanks, Jo Ann and Harvey. We look forward to coming back.

For More Information About Flagstaff