Durango, a charming town with more than 17,000 residents in southwestern Colorado, sits in the Animas River Valley surrounded by the San Juan Mountains. Its idyllic location draws visitors year-round. While the busiest tourist season runs from Memorial Day to Labor Day, winter visitors can enjoy skiing at nearby Purgatory Resort, and spring visitors can hike or bike through magnificent fields of wildflowers. I’m happy anytime I get to visit southwestern Colorado, which I’ve always considered the most scenic part of the state, but my favorite time is fall. Aspen trees turn a brilliant gold, daytime temperatures are in the 70s and the tourist attractions are lively but not overcrowded.

In mid-September, the Montezuma Land Conservancy hosts the annual Harvest Beer Festival in the nearby town of Cortez. It’s a chance to drink regional ales and ciders, save land (the sponsor has conserved more than 41,000 acres in three counties) and listen to good music. While I was happy to support this altruistic cause, it was the band Let Them Roar that got us there for the 2015 event. When the band started at 6 p.m., a few devoted followers listened from their lawn chairs. Soon the dance floor was dotted with children, who were almost as entertaining as the musicians. When the set ended at 9 p.m., appreciative fans were dancing, standing and clapping for an encore.

Truth be told, we’ve known Sofia Clark, one of the singers in the band, since she was an infant. Her mom, Michele Diamond, and stepfather, Sumner Schacter, met us earlier in the day at the KOA Campground in Cortez. We had a few hours before the beer fest opened. My husband, Jim, and Sumner opted to mountain bike at the popular Phil’s World Trail System. They spent several hours enjoying the hard-packed, single-track trails carved through a high-desert mesa.

Michele and I went to the Anasazi Heritage Center, a museum in Dolores that explores native cultures and history in the Four Corners region. We learned about the Ancestral Puebloans, the term modern descendants prefer rather than Anasazi, by watching a film called “The Cultural Heritage of the Great Sage Plain” and studying the interactive exhibits. We peered through microscopes to examine pottery shards and imagined everyday life by looking at a replica of a pit house. Outside, the short, paved Escalante Trail leads to a view of McPhee Reservoir and the Escalante Pueblo, a small settlement from the mid-1100s. The museum is also headquarters for the Canyons of the Ancients National Monument, which contains more than 6,000 recorded archaeological sites on more than 170,000 acres of high desert.

Getting to Durango, Colorado

A rafter of wild turkeys gathered on a road near Durango.

The next day we moved the motorhome to Durango, stopping at the small town of Mancos on the way. We browsed several interesting art galleries. Raven House Gallery has some lovely handmade aspen vases and beautiful landscape photographs. Goodnight Trail Gallery of Western Art features high-end paintings, sculptures and Kelly Kilgore’s museum-quality collection of antique and vintage Native American rugs, weavings, baskets, pottery, kachina dolls, beadwork and jewelry. The most memorable sight we saw was not the art, but Will Stone, a local man, strolling down the street followed by his cow named Crash, with his dog, Charlie, calmly perched atop the cow.

We checked into Junction Creek Campground, northwest of Durango. Our peaceful campsite (electric hookups only) was surrounded by ponderosa pines. The Colorado Trail, which stretches 470 miles to Denver, begins nearby. We hiked on the trail, encountering numerous hikers and mountain bikers, attesting to its popularity with outdoor enthusiasts. Since there are no water or dump facilities at the campground, after two nights we moved to Alpen Rose RV Park, a full-service campground north of Durango for the rest of the week.

Jim and I devoted a full day to exploring Mesa Verde National Park. After stopping at the Visitor and Research Center, we decided to see the Spruce Tree House and hike the Petroglyph Point Trail. We bought guide booklets for each. Four miles inside the park, we detoured to check out Morefield Campground. There are 267 sites, including 15 with full hookups (reservations required). It would be ideal for RVers who plan to be at the park for more than one day.

We continued on to Chapin Mesa, site of Spruce Tree House and the Archeological Museum. In the museum, dioramas depict scenes of Ancestral Puebloans who inhabited the area from the year 550 to 1300. Other exhibits include prehistoric artifacts and various items related to the park. Mesa Verde features nearly 5,000 known archaeological sites, including 600 cliff dwellings and mesa-top sites. For the first six centuries, Ancestral Puebloans lived on the mesa tops. In their final 75 to 100 years, they built the cliff dwellings. Spruce Tree House is the third-largest cliff dwelling in the park and the best-preserved due to the protection of the overhanging cliff. Built in an alcove 216 feet long and 89 feet deep, this village contained 120 rooms, 10 associated ledge rooms, eight kivas and two towers. As of press time, Spruce Tree House is closed to the public due to rock-fall concerns for the foreseeable future, though the site can still be viewed from overlooks near the archaeological museum.

The Petroglyph Point Trail is a 2.4-mile loop that encircles Spruce Tree House. We used our guidebook to identify points of interest. Most of the 34 markers on the trail are there to introduce the natural environment and the ways it was used to provide food, clothing, shelter and medicine. Pictograph Point, at marker 24, is the largest and best-known group of petroglyphs at Mesa Verde. According to our guidebook, “The panel is misnamed because pictographs are painted on rock whereas petroglyphs are carved into the rock.”

On our way back to Durango, we saw a collection of interesting sculptures that aroused our curiosity. Dave Sipe has an open studio, sculpture garden and museum filled with whimsical, artistic carvings. A folk artist and wood sculptor, Dave invited us to wander the grounds. We were impressed with the quality and variety of his work, with everything from painted wood statues, to animals with a natural wood finish, to functional furniture. Only later did I discover that he once won a world championship in chainsaw sculpture.

Several locals recommended Ken and Sue’s Restaurant. After all that walking at Mesa Verde, we were ready for a good meal. We arrived at 5 p.m. without a reservation and were lucky to get the last table on the patio. I ordered the Thai shrimp with coconut curry, and Jim had the grilled tuna steak with wasabi smashers. Both meals were excellent. 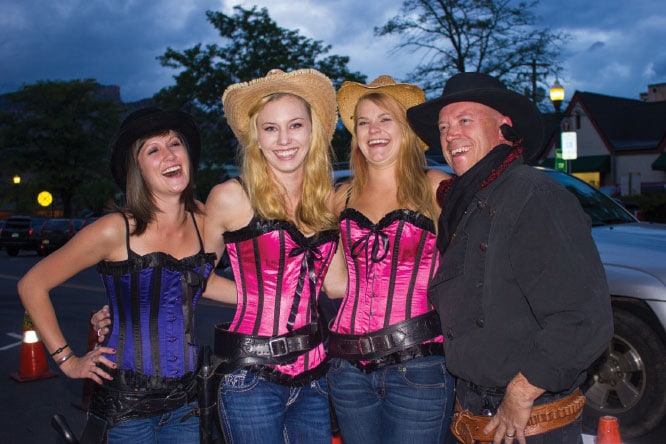 Dance-hall girls and the sheriff pose for photos after the Old West show at the Diamond Belle Saloon in the Strater Hotel.

After dinner we walked down the street to see an Old West show at the Diamond Belle Saloon in the Strater Hotel. We passed the time inside listening to a ragtime piano player. Soon, three saloon ladies – the Narrow Sisters, so called because their daddy, the sheriff, tried to keep them on the “straight and narrow” – entered the bar and ordered shots. Not long after that, daddy came in, very angry at his daughters. After a heated disagreement, the four of them went outside to settle matters. Most of the people in the saloon went out to watch. The daughters got the best of dear old dad in a mock gunfight. If only all such disputes could end this way, with everyone unharmed and smiling for group photos.

The undisputed top attraction in town is the Durango and Silverton Narrow Gauge Railroad. It’s something all visitors to Durango should do at least once. We rode it several years ago and fondly remember the stunning scenery along the Animas River. The vintage coal-fired steam-engine train was voted “One of the World’s Top 10 Train Rides” by the Society of American Travel Writers and the “Number One North American Train Trip” by National Geographic Traveler. Passengers can choose from four classes: presidential, first, deluxe or standard. The deluxe class offers a historic narration coach in which travelers learn how Durango began as a railroad town in 1881 and what it took to build the railroad. The train can also be used to access the San Juan National Forest and Weminuche Wilderness. When we rode it, we got off at Needleton, hiked for several hours in Chicago Basin, then caught another train on its return to Durango.

Since we didn’t explore Silverton on our previous trip, we decided to drive there. In the early 1870s, nearly 1,000 prospectors came to the area looking for gold. In 1882, the first train rolled into this mining camp from Durango. By 1883, the town grew to a population of 2,000. The mining operation closed in the early 1990s. Now Silverton, with a year-round population of 500, is a National Historic Landmark. The tourist destination is noted for its outdoor recreation in the San Juan Mountains and the Animas River, tours of the Old Hundred Gold Mine, and its charming Main Street with shops, restaurants and hotels built in the late 1800s. 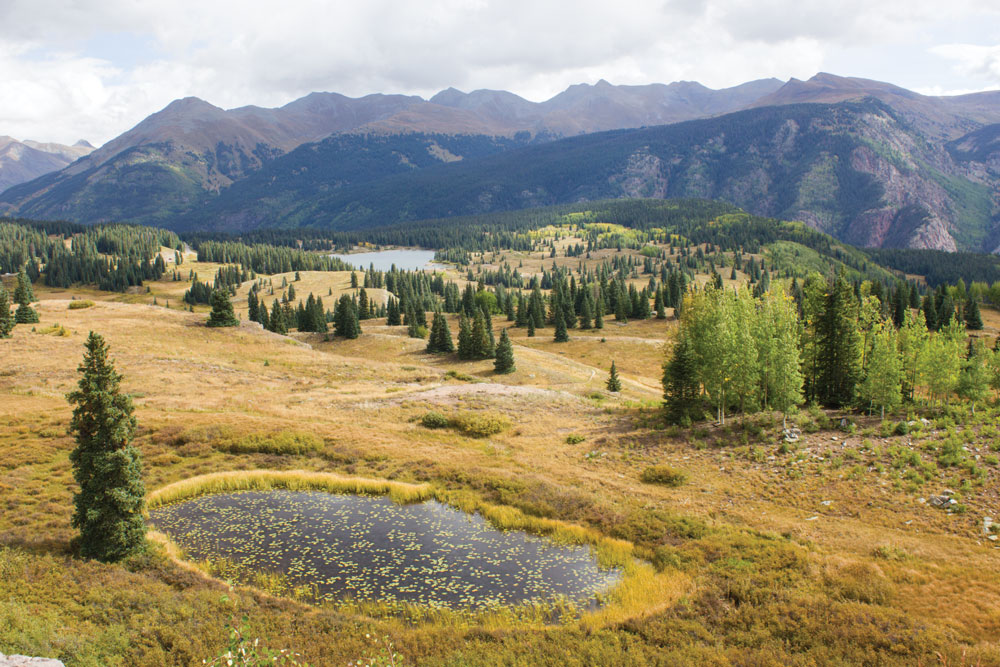 Molas Pass, at an elevation of 10,899 feet, is on U.S. Highway 550 south of Silverton, and is also called the Million Dollar Highway.

After eating a yummy meal and buying several gifts in the shops, we took a leisurely drive back to Durango, stopping at sites along U.S. Highway 550. Less than 10 minutes after leaving Silverton, we were atop Molas Pass, elevation 10,899 feet. From the large parking lot, we walked to the viewpoint to admire the majestic San Juans with a lily pond in the foreground. 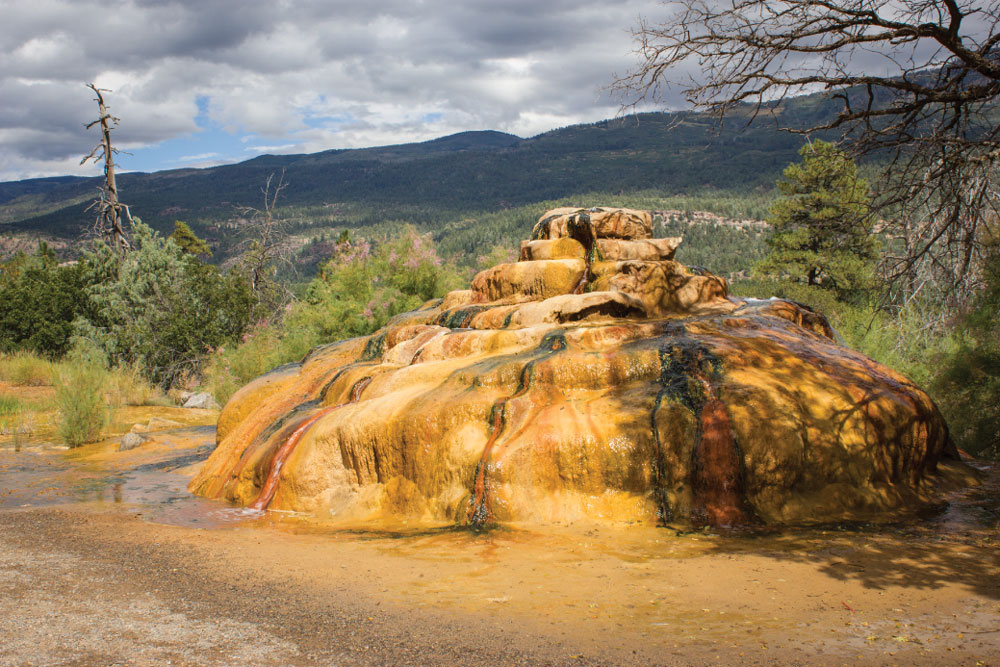 In the late 1800s the waters at Pinkerton Hot Springs (U.S. Highway 550 north of Durango), thought to cure all diseases, were used for drinking and soaking.

Honeyville is a third-generation family business just north of Durango that’s been around since the 1920s. We stopped to sample some of its 100-plus products, including specialty honeys, jams, jellies and sauces. About 300,000 pounds of local honey per year goes into making these products. Using a new custom-made still from Kentucky, the Honey House Distillery is now making vodka and two whiskeys. I’ve never been much of a bourbon drinker, but I loved the Colorado Honey Bourbon Whiskey.

We saved the best for last, spending time with Zeke, our 5-month-old great-nephew, and his parents, Caley and Bob Copeland. We did family-friendly activities, like walking the Animas River Trail. The paved trail, popular with walkers, runners and bikers, stretches 7 miles through Durango’s Animas River Greenway. We also drove to Baker’s Bridge, the picturesque site of Butch Cassidy and the Sundance Kid’s daring jump into the river below. 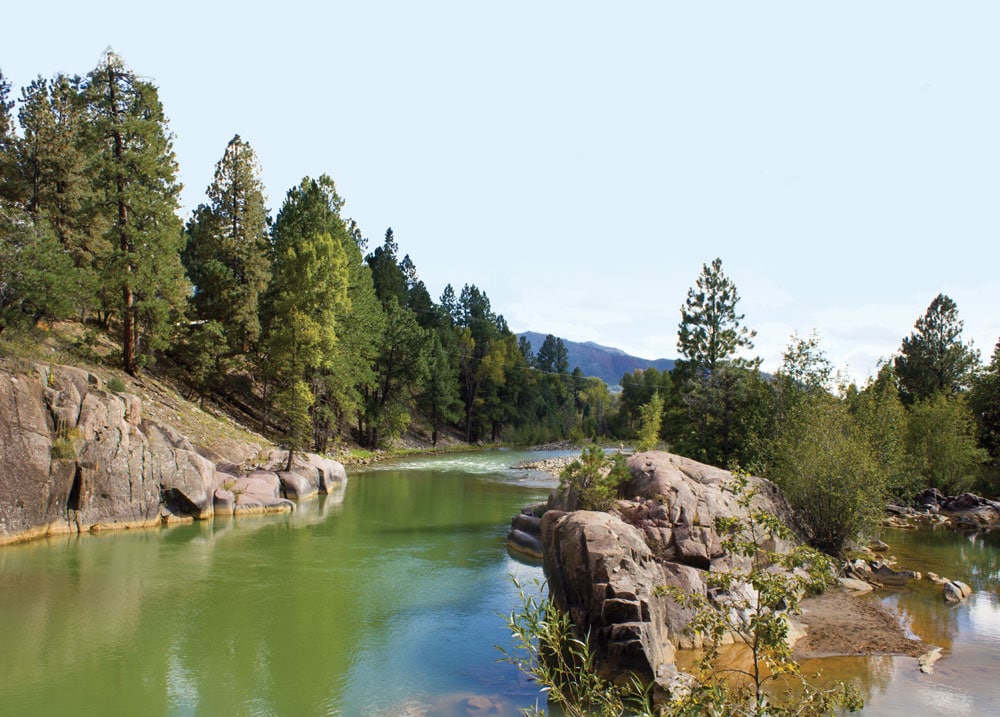 Baker’s Bridge was the picturesque site of Butch Cassidy and the Sundance Kid’s daring jump into the river below.

Southwest Colorado embraces its past by preserving ancient ruins, conserving public lands, bringing history alive on its famous train and staging Old West showdowns on the streets of Durango. It makes me grateful to live in the present. The abundant outdoor recreation makes it an exciting place to watch our great-nephew grow up.

Junction Creek Campground (29 sites with electric hookups only), northwest of Durango, sits near the beginning of the Colorado Trail, which stretches 470 miles to Denver.

Getting to Durango, Colorado

Located in southwestern Colorado at the foot of the San Juan Mountains, Durango is 20 miles north of the Colorado-New Mexico border, at the crossroads of U.S. Highway 160 (east/west) and U.S. Highway 550 (north/south).