The lone pronghorn antelope loped alongside me seemingly without a care on the Carrizo Plain National Monument, located in the southern San Joaquin Valley of Central California. I was strolling through the grasslands wandering nowhere special, but North America’s fastest land mammal was intent on a southerly direction toward a lush green patch of grasses in the middle of the plain.

It always seems as if everything just slows down for me once I’m driving across the Carrizo Plain. Yet, my senses are on high alert because I never know what I’ll see next, my binoculars and camera always within arm’s reach.

When I tell people about Carrizo Plain National Monument, I usually detect a quizzical look and a response of, “Where’s that?” Quite a few, though, take up my recommendation and head to the California valley and the Carrizo Plain. Unfortunately, many return a little disappointed, “I don’t see what the big deal is,” they’ll say. Chances are they were in too much of a hurry. To get the most out of a Carrizo Plain experience it all comes down to this: drive slowly. If you don’t, you’re going to miss out on everything the area has to offer. 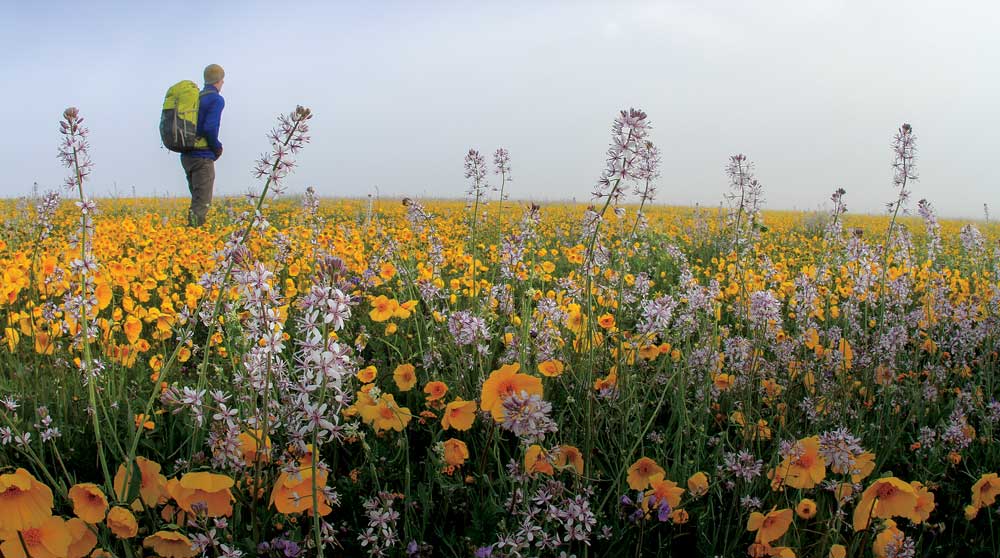 Silence on the Plains

The first thing that intoxicates me at Carrizo Plain is the utter silence, beyond of course, the melodic birdsong of a western meadowlark or a yelping coyote in a distant canyon. Driving a motorhome or dinghy vehicle through the Carrizo Plain is like taking a step back into “Old California.” Beyond a few scattered ranching efforts in the early 1900s, the Carrizo Plain appears much as it did 200 years prior, so it’s held onto its open, high-desert allure and stunning arid landscapes that never seem to fade on the horizon. And although the grasslands are of vital importance, this unique national monument also encompasses two rugged mountain ranges: the Temblor Range to the east, where the San Andreas Fault serpentines northward along its base, and the steep Caliente Mountains to the west, which reach elevations of more than 5,000 feet.

To maintain that silence and sweeping grandeur, there are no facilities within 50 miles in any one direction on the Carrizo Plain, so motoring out to the grasslands requires that you bring all provisions with you. Also, keep in mind that many roads within the monument have an unimproved dirt surface and can become impassable during periods of rain. Though the main route, Soda Lake Road, is open year-round, rains may make parts of it slippery, muddy and impassable at times. All roads in the monument may be periodically closed for safety conditions, so check ahead.

Where the Streets Have No Names

Soda Lake Road is the main road across the Carrizo Plain, but there are many old, nameless ranch roads that lead to various points of interest across the grasslands and provide easy access for a motorhome searching for solitude and wide-open spaces. Sometimes, all it will take to spot elusive wildlife is to drive one of the old ranch roads until they dead end in the grasslands.

Translocations of wildlife, including pronghorn antelope, have helped the fauna thrive in the area.

There are two free campgrounds within the national monument, and both are first-come, first-served.

Both primitive campgrounds are operated by the Bureau of Land Management (BLM), and can be reached by calling 661-391-6000.

The Carrizo Plain is also managed by the BLM, so camping along Soda Lake Road is not permitted, but once off the main road, those nameless side roads offer pleasant pullouts for those who want to do a little exploring.

The Goodwin Education Center is open from December through April, Thursday-Sunday, 9 a.m. to 4 p.m. Maps of the Carrizo Plain are available there and online (https://www.blm.gov/visit/goodwin-education-center), as is up-to-date information on roads and recent wildlife sightings throughout the national monument. The center also offers information on tours to Painted Rock and Saucito Ranch, an example of early ranching efforts on the Carrizo Plain.

The natural sandstone cathedral that is Painted Rock juts prominently on the Carrizo Plain near the foothills of the Caliente Mountains. An important Native American site, it’s still a gathering place for the Chumash and Yokut Indians.

From July 15-February 28, Painted Rock is self-guided with the appropriate permit from the BLM. The walk to Painted Rock is an easy 1½-mile stroll. You can’t miss Painted Rock. There’s no denying its size and the view from within the cathedral looking out across the Carrizo Plain, Soda Lake and the Temblor Range. It’s easy to see why Native Americans utilized the sandstone rock outcropping and why it is still prominent in their cultures today. 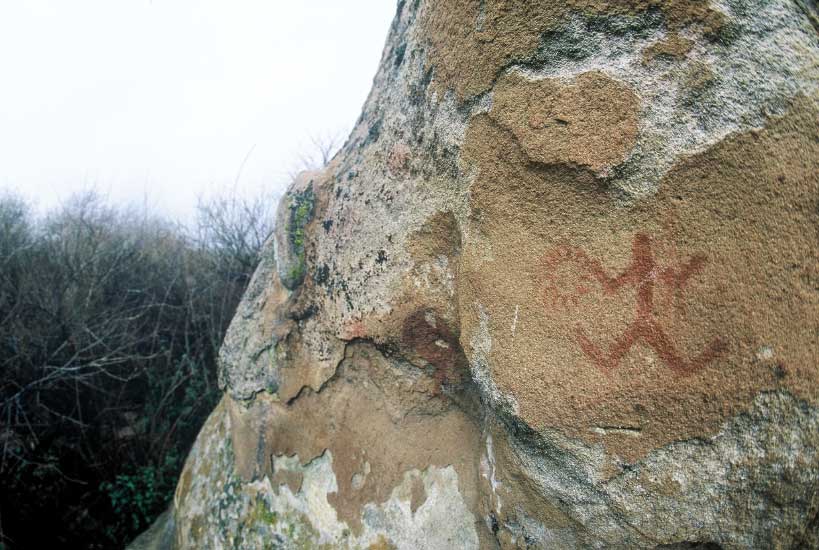 Painted Rock stands near the foothills of the Caliente Mountains. Illustrations, such as this Chumash art, abound.

Inside Painted Rock are ancient rock art sites, the gritty sandstone a natural canvas for their detailed rock art of mystical figures, some human, others involving regional wildlife. When near rock art sites it’s important to remember to look and not touch, and to not kick up any dust near a site. These sites have survived the elements and too much vandalism in years past. What remains is still very much significant and must not be disturbed.

Painted Rock is also a sort of “grassland condominium.” Everything from barn owls and prairie falcons to desert cottontails and white-crowned sparrows utilize every cleft, alcove and grotto for refuge and nesting habitat. From March 1-July 14, Painted Rock is closed to the public to thwart any disturbance to nesting birds, but there are a few guided trips through the Goodwin Education Center during that time.

During the spring of 2017 and 2019, California experienced a Super Bloom of prolific proportions, and the Carrizo Plain was arguably the best place in the Golden State to experience such a natural wonder. It was as if someone used a massive paintbrush and splashed purples, oranges, yellows, blues and magentas across the entirety of the national monument. Varieties are exceptional but the concentrations of those wildflowers are what is pleasing to the eye.

In the middle of the Carrizo Plain is a large depression, and during each of those magical years, a dense carpet of valley phacelia filled the entire depression. From afar, while driving in from Soda Lake Road, those deep purple blooms appear like some distant inland sea or lake. On several occasions, first-time visitors have asked me if that was a lake on the horizon. A couple of dirt roads followed by an easy walk leads to the plethora of blooms.

In the northern region of the Carrizo Plain is Soda Lake, the largest natural alkali lake in Central and Southern California. Following wet winters, it fills up with water and becomes an important stopover for migratory birds like sandhill cranes, American avocets, western sandpipers and long-billed curlews. Simmler Road, another dirt track, runs behind Soda Lake. During a Super Bloom, thick carpets of tickseed coreopsis, tidy tips, larkspur and Russian thistle sweep eastward toward several vernal pools. The yellow blooms can be seen from miles away while motoring in on Soda Lake Road from the south. 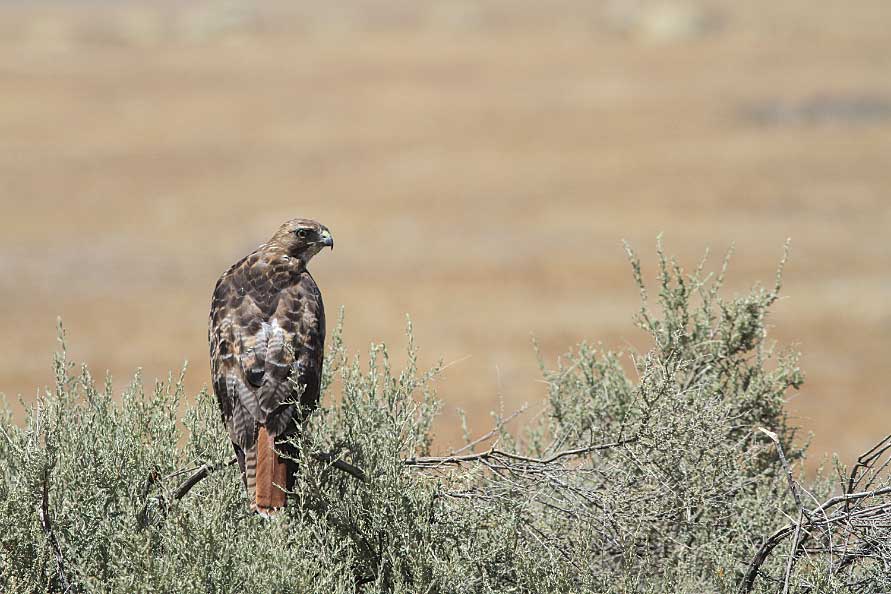 A red-tail hawk surveys the landscape from a rare tree in the monument.

The Super Bloom of 2019 was the best year I’ve experienced when it comes to owl’s clover. It was prolific in several areas of the national monument. Dense clusters of the tiny magenta blooms could be seen hugging the rolling hillsides and grasslands mixed in with curling fiddleneck and delicate tidy tips. One of my favorites is the baby blue eyes, and they were prominent on the hillside at the Soda Lake Overlook. 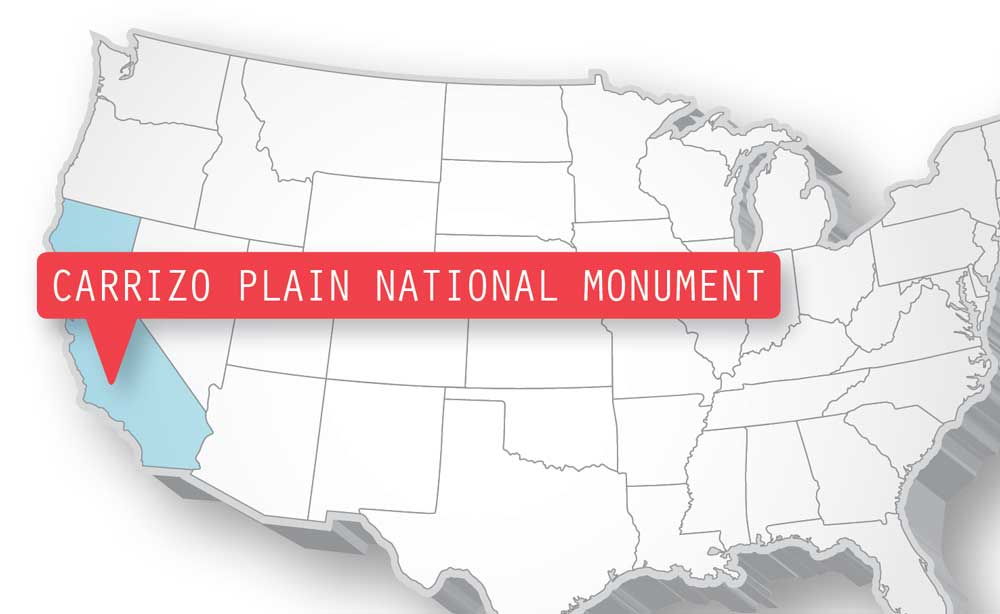 Situated between California State Routes 58 and 166, Carrizo Plain’s main drag, Soda Lake Road, runs between the two highways in what is now the last of California’s historic grasslands. Carrizo Plain is comprised of 204,107 acres of public land, and was named a national monument on January 17, 1991.

There’s a slight elevation gain just southwest of the “phacelia lake.” It’s an ecological transition zone, but right next to Soda Lake Road. It’s typically a fair bet following a wet winter that wildflowers will abound in that zone. It’s reliable for not only carpets of brilliant, low-lying goldfields, but within that bright yellow blanket are owl’s clover, snake heads, buttercups and purple thistle.

As late spring approaches, the Temblor Range, with its open book-shaped canyons, comes alive with colorful carpets. The cooler, higher elevations of these remote mountains allow them to bloom later in spring, and when they do, the blooms can be seen from miles away. Hiking into the Temblors can be strenuous, but the blooms, colors and backdrops are well worth the effort.

Drive, stop, scan. Drive, stop, scan. I do this all over the Carrizo Plain, but if I didn’t, I wouldn’t see any of the unique wildlife on what has also become known as “California’s Serengeti.” Having said that, I keep my binoculars in my lap while driving and my camera by my side.

The grasslands once stretched northward to what is now Fresno, and the plains were grazed by massive herds of Tule elk, pronghorn antelope and black-tailed deer. Over the years, agriculture has taken over, depleting the great herds and leaving us, thankfully, with the Carrizo Plain. 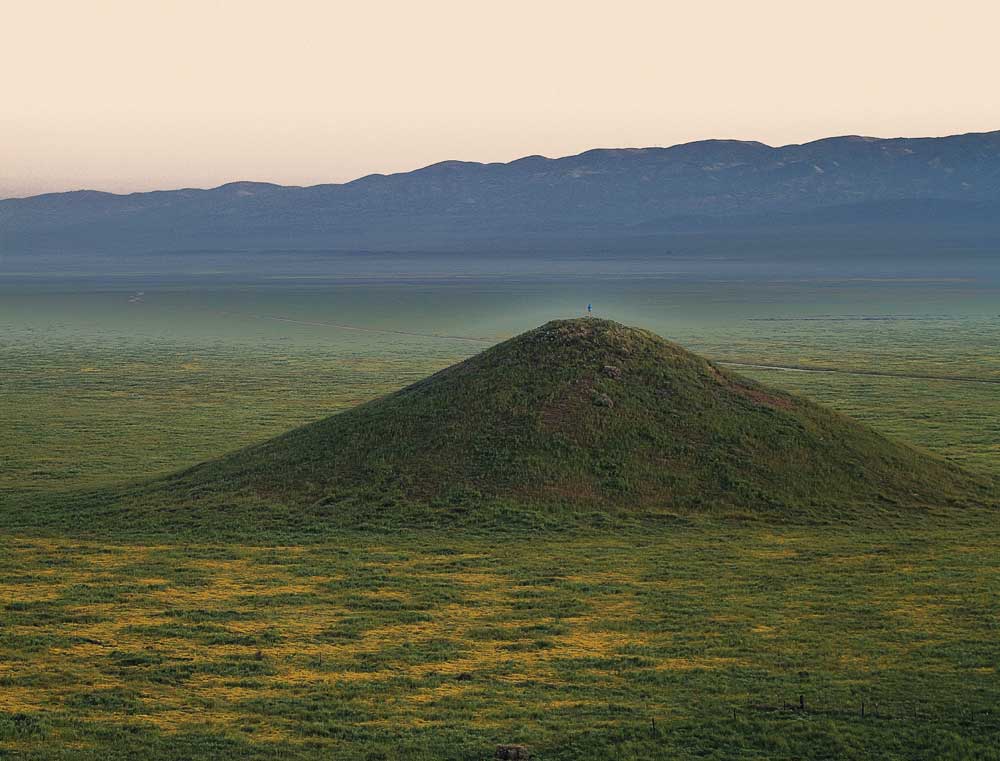 Visitors to Carrizo Plain are treated to sweeping views of colorful blooms, in addition to a feeling of blissful solitude.

However, in the late 1990s, trans­locations of elk and pronghorn occurred on the Carrizo Plain, which has helped replenish the grasslands with large herbivores. In fact, the herd of Tule elk is one of the fastest growing in all of California. Small, scattered herds of pronghorn are frequently seen, but are more specialized eaters than elk and are taking longer to adjust to their former historic range.

There is a wide range of wildlife within the national monument. The Carrizo Plain possesses more endangered species than anywhere else in the state. Some of those include the San Joaquin kit fox, California condor, giant kangaroo rat, blunt-nose leopard lizard, antelope ground squirrel and the California jewel flower.

Birding is also prolific on the Carrizo Plain. The area is known for its abundant raptors — like ferruginous hawks and prairie falcons — and five species of owls. Old ranch posts and fencing, barren snags and dilapidated water tanks are always excellent places to start when it comes to spotting hawks, eagles and falcons. However, don’t forget all the songbirds that thrive in the Carrizo Plain. While driving slowly, many species can be easily seen alongside Soda Lake Road. The grasslands are vital to their existence, so it’s a good to take note of as many species as possible while enjoying the grasslands. The Goodwin Education Center is always keen on what visitors see on the grasslands.

The silence of the Carrizo Plain might be overwhelming. Hopefully though, your senses will focus on all its inhabitants and the stunning grassland landscapes that encompass “Old California;” a big deal to those in need of a not-so-distant escape. 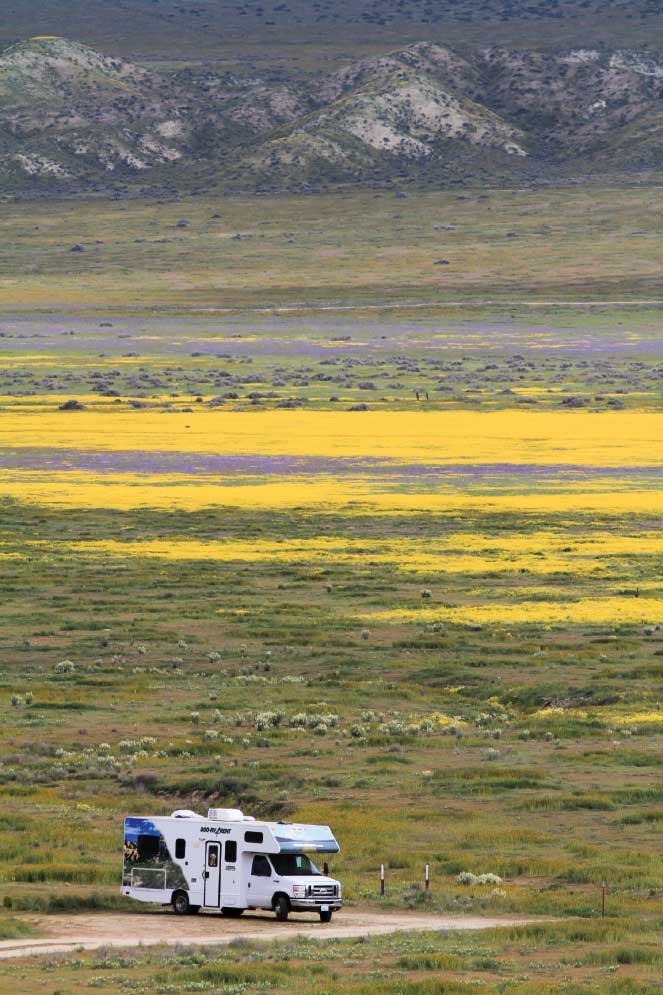 Carrizo Plain can accommodate motorhomes, but call ahead to ensure roads aren’t washed out, which can happen quickly during heavy rains.

Friends of the Carrizo Plain