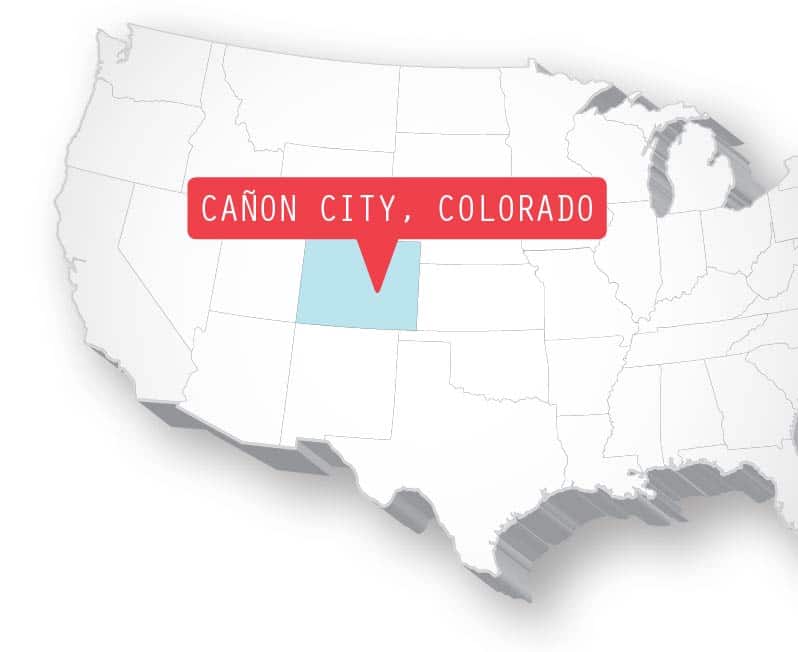 If you like beautiful scenery, outdoor adventure, fine wine and ferocious dinosaurs, Cañon City, Colorado, has all that and more. Nicknamed the “Climate Capital of Colorado,” the city is protected from harsh weather conditions by its geography and 5,300-foot elevation. With a population of around 16,000, the city is large enough to ensure plenty of creature comforts and interesting attractions, but small enough to grant easy access to open space in the nearby Rocky Mountains and plains. The Arkansas River flows through southern Colorado’s high desert, exiting the Royal Gorge just west of Cañon City.

Mountain View RV Resort is conveniently located on U.S. Highway 50 between Cañon City and the turnoff to the Royal Gorge. My husband, Jim, and I found it to be the ideal location for our stay in the Royal Gorge region. Our spacious site had an unobstructed view of the mountains. 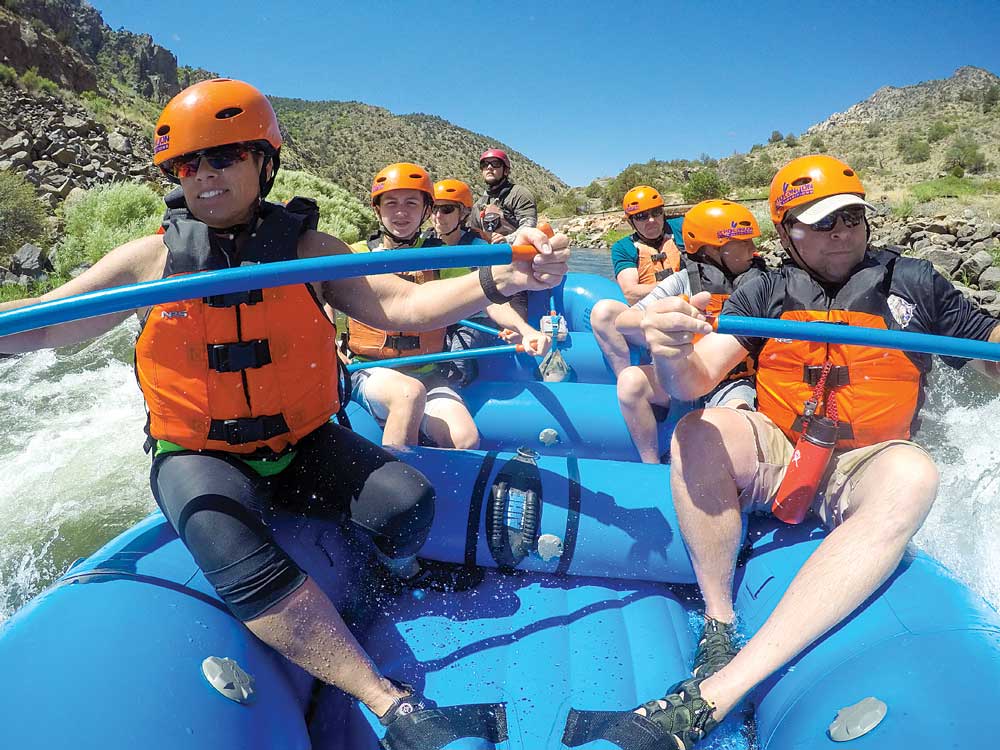 The Holy Cross Abbey and Winery

After settling in at the RV park, we checked out some local history in our dinghy vehicle. The Holy Cross Abbey, a former monastery of the Order of St. Benedict, was built in 1924 in the Gothic Revival style. A boarding school was opened on the property, which prospered during the 1950s and 1960s. After a steady decline, it closed in 1985. In the early 2000s, the remaining 20 monks hired a professional viticulturist to plant a vineyard in an effort to support themselves. The monastery closed in 2005, and new owners took over.

The Winery at Holy Cross Abbey is now producing award-winning wines. All of the wines are made on property with grapes from Colorado, California and Washington. In the tasting room, visitors can stand at the bar and taste most wines for free. We opted for the VIP tasting. Dexi, our knowledgable server, brought a plate of cheese, fruit, nuts and bread to our table on the patio, followed by samples of their wines. With each new wine, she recommended which food on our plate would pair well with it. Yum! She was right every time. We bought some wine to take home with us, and took notes about what to serve with it. 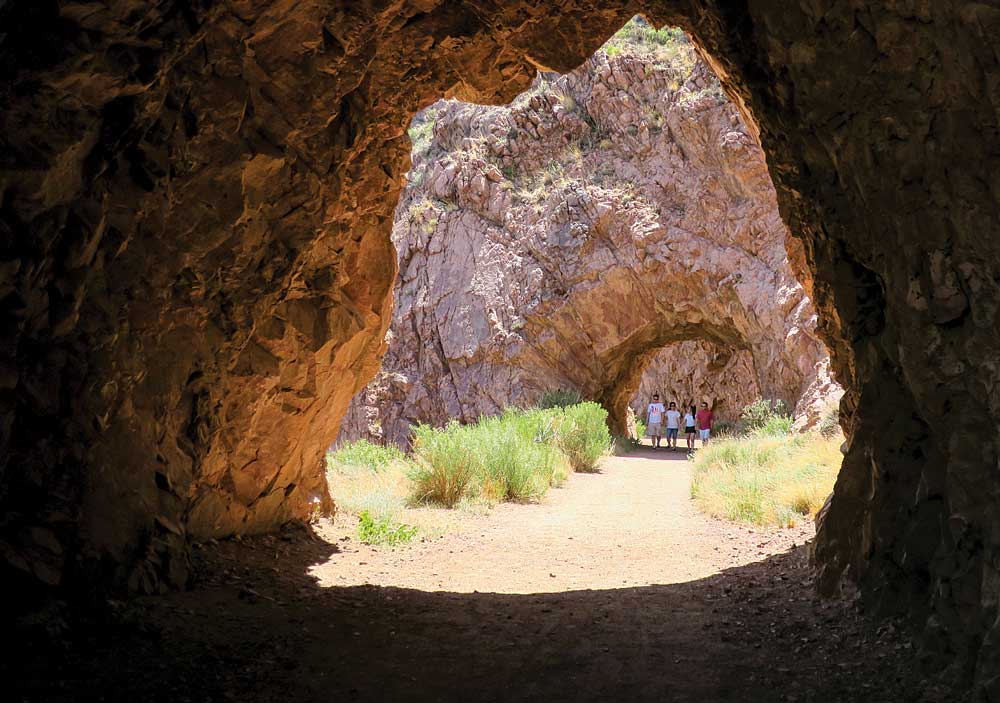 Tunnel Drive is a 2-mile-long hiking and biking trail along an old railroad bed.

The next morning we were eager to see the Royal Gorge Bridge and Park, the city’s most famous attraction. The bridge, built in 1929, spans the gorge 955 feet above the Arkansas River, making it America’s highest suspension bridge. The total length of the bridge is 1,260 feet, with the main span stretching 880 feet between the two towers. Nearly 1,300 wooden planks cover the steel base structure. To commemorate the bridge’s 90th anniversary, 5,000 visitors were invited to put their signature on the bridge. During our visit in the summer of 2018, we wrote on a plank. An artist wood-burned the signatures into the planks for installation in early 2019.

Walking across the bridge, we watched people below us rafting on the Arkansas, and others soaring above us on the second-highest zip-line in North America. Visitors from all over the U.S. paused to snap photos in front of their state flags that line the bridge. A “No Fishing From the Bridge” sign made us laugh.

As we neared the other side of the bridge, we were welcomed by the lovely singing voice of Lissa Hanner. Her sense of humor was apparent in her song choices. I especially liked her rendition of Nancy Sinatra’s “These Boots are Made for Walking.” When she invited two young children in the audience to join her on stage for a dance, it was hard to tell who was having the most fun: the kids, the singer or the audience. Shortly after she finished singing Michael Murphy’s “Wildfire,” we heard the announcement that the show at the Plaza Theater was about to start.

Since we wanted to see the film about the wildfire that swept through the area in June 2013, we left to secure seats in the theater. The fire consumed 3,218 acres surrounding the attraction, and 48 out of 52 structures at the park were destroyed. The bridge itself received minimal damage, requiring only 32 of the wooden planks to be replaced. Work to rebuild the visitors center, aerial tram and other structures began the following January. In August 2014, the park reopened.

Dinosaurs lived in the Royal Gorge region more than 100 million years ago. Paleontologists have found fossils of brontosaurus, stegosaurus, allosaurus and camptosaurus less than 3 miles from the bridge. 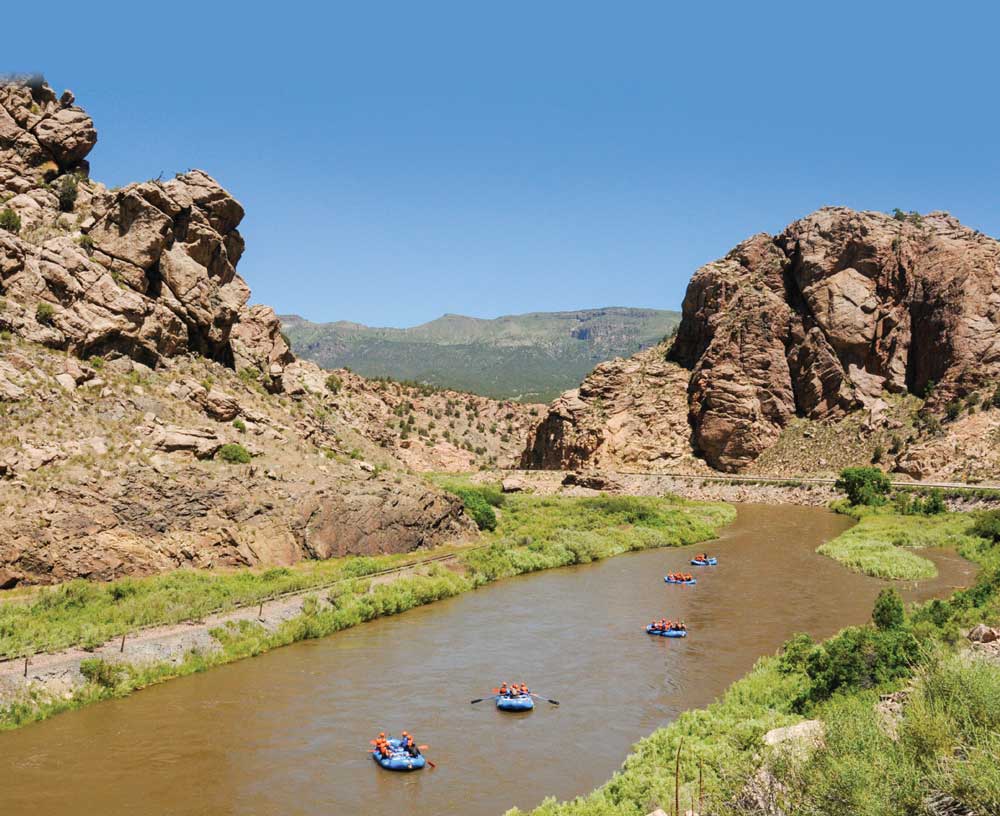 The Royal Gorge Dinosaur Experience pays tribute to these prehistoric creatures. It is conveniently located on Highway 50, near the turnoff to the Royal Gorge Bridge. When we entered the museum, Susan, a tour guide, asked us if we wanted to hold a real dinosaur bone from the Jurassic era. It wasn’t a big chunk of bone, but the fossil was much heavier than I expected. Susan explained how their full-scale dinosaur fossil casts from the Jurassic and Cretaceous periods are made using molds, laser scanners and 3D printers. The stegosaurus in their collection was made by 3D scanning and printing a nearly complete fossil, which was found in Cañon City by high school students on a fossil-hunting field trip in 1936.

Looking at old bones and fossil casts showed us the skeletal structures, but it was outside in the Dinosaur Wild Walk that we got to see what these creatures looked like in the flesh. Sixteen life-sized animatronic dinosaurs lined the walkway, some of them tracking our movements as we strolled by. A diplodocus longus noticed us when we approached, but quickly seemed to return his attention to the humans testing their skills, balance and bravery on the multi-story ropes course.

We tested our own bravery on Skyline Drive, a narrow, one-way paved road (for passenger cars only) along a razorback ridge that offers a panoramic view of the city. We stopped at the pullouts to admire the view. Since the 2.6-mile road has no guard rails and sometimes steep slopes on both sides, all eyes were on the road while our dinghy was in motion. The road has an interesting history, from dinosaurs to prisoners. Eons ago, dinosaurs left more than 50 footprints near the entrance, which weren’t identified until 2000. In 1905, 60 inmates at the nearby Colorado State Penitentiary built the road in exchange for reduced sentences. 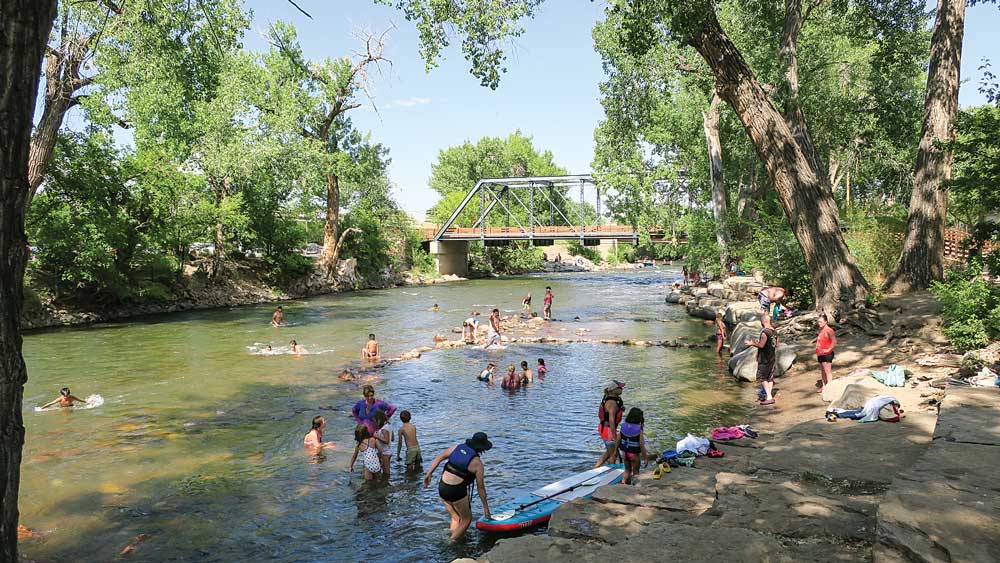 This spot near the Bullen Bridge on the Riverwalk Trail attracts people wanting to cool off on a hot summer day.

After watching the rafters from the bridge, we were excited that we had booked a rafting trip with Echo Canyon River Expeditions for the following day. We arrived about an hour before our trip was to depart so that we could get checked in and be fitted with life vests. The efficient staff accomplished that task in about five minutes, giving us plenty of time to look around. Echo Canyon is housed in the former 8 Mile General Store, which was built using timbers from the original Royal Gorge Bridge. Echo Canyon has been at this location since its founding in 1978. When Andy Neinas, the current owner, bought the business in 2001, he added the 8 Mile Bar and Grill. The retail store and restaurant are decorated with antiques reflecting Colorado’s history, including a stove from the 1800s, historical highway markers salvaged from junk yards and a collection of Colorado license plates from consecutive years (1967 to 1975) when actual metal plates were issued annually to renew plates.

Echo Canyon offers half-, full- and multi-day rafting trips through Royal Gorge and Bighorn Sheep Canyon near Cañon City, as well as six other locations in Colorado. The Royal Gorge has wet-and-wild Class III to V rapids. We chose the half-day Bighorn Sheep Canyon trip with family-friendly Class I to III rapids. A bus took our group of 30-plus people and our guides to the spot where we started our adventure. After listening carefully to the safety talk, we all loaded into our assigned rafts. Our guide, Alex, was competent, knowledgeable, friendly and had a great sense of humor. The six passengers in his boat followed his commands to paddle forward or back. At one point, we paddled upstream to a Class II rapid Alex called the magic wave. We performed the “typewriter” maneuver, letting the wave move us from left to right. When Alex called for a “high five,” usually after making it through a section of rapids, we would tap the ends of our paddles together above our heads in celebration. 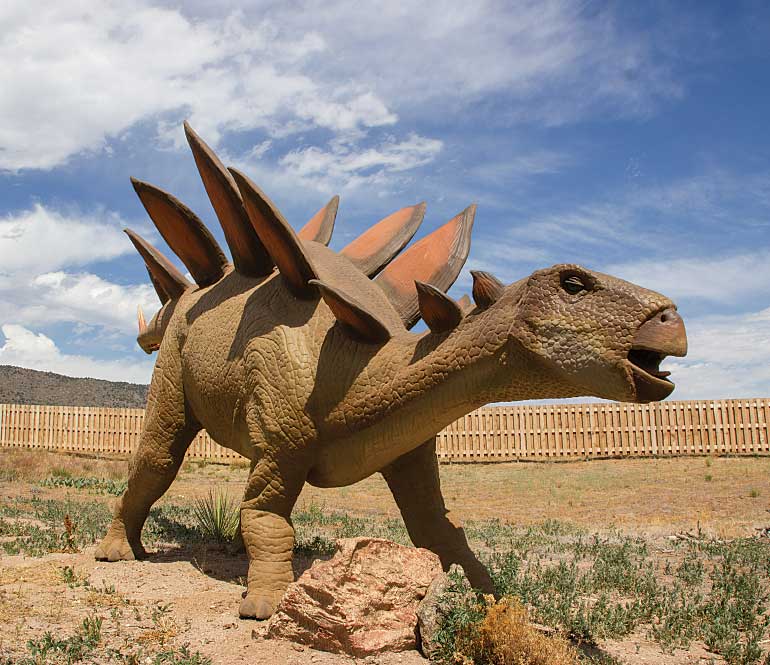 This stegosaurus is one of 16 life-sized animatronic dinosaurs in the Dinosaur Wild Walk.

After our perfect morning on the river ended, we satisfied our appetites at the 8 Mile Bar and Grill. I ordered the ahi tuna salad and Jim had the black and blue burger, with bacon, grilled onions and blue cheese. Both of our meals were delicious.

Before we left Echo Canyon, we got a quick peek at their cabins and glamping tents. If your non-RVing friends are jealous of your adventures, you can invite them to come rafting with you and stay at the nearby Royal Gorge cabins. Spoiler alert: this time you might be jealous of them!

During our stay, we asked locals for recommendations on bike rides and restaurants. Several sources suggested two trails for biking and hiking: Tunnel Drive and the Arkansas Riverwalk Trail. From the trailhead, we were able to ride the two connected trails in a couple of hours. Tunnel Drive is a 2-mile trail along an old railroad bed. It has three short tunnels and a great view of the Arkansas River. The Riverwalk Trail winds along the river through the city for about 7 miles. We saw lots of people playing in the river near the Bullen Bridge, a pedestrian bridge that crosses the river.

Quincy’s Tavern, a steakhouse in the nearby town of Florence, was also recommended. Even though we were warned that all they offer is steaks, it didn’t quite sink in until we got there. They have a one-item menu: Sunday through Thursday, they serve filet mignon; Fridays and Saturdays, they serve prime rib. The limited menu doesn’t hamper its popularity. When we arrived around 6 p.m. on a Sunday night, there was a 30-minute wait for one of the 14 tables. Jim and I took seats at the bar, where we were able to have a chat with Tina, the owner. She said 75 percent of her customers are locals, 25 percent visitors. The restaurant will soon be expanding into an adjacent space.

The Royal Gorge Region has plenty to offer its visitors. We came for the bridge, and in just a few days, we also enjoyed rafting, dinosaurs, fine wines, tasty meals, spectacular scenery and bike rides. Just think what we could have done in a week. 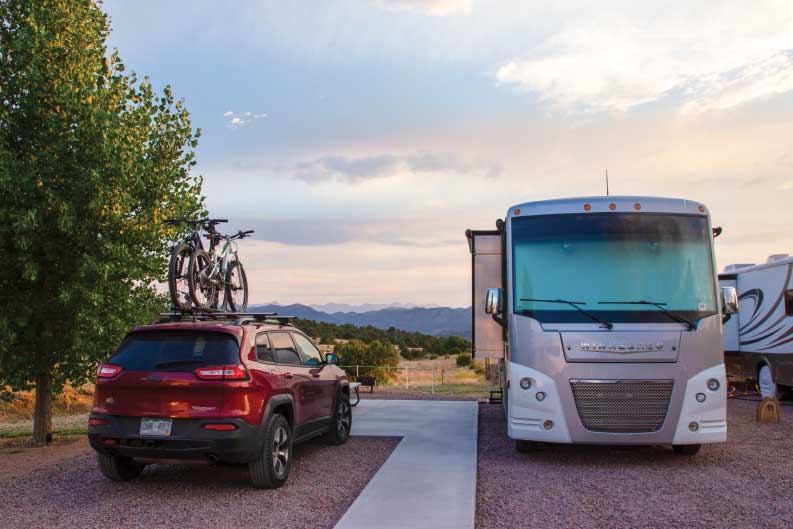 Our site at the Mountain View RV Resort had a clear view of the mountains.