With the National Park Service celebrating its centennial this year, what better time to travel U.S. Route 89, also known as the National Park Highway. The Wyoming and Montana stretch of Route 89 connects three of the country’s more popular national parks — Grand Teton, Yellowstone and Glacier — and is unmatched in the northern Rocky Mountains for its scenic beauty, wildlife watching and frontier history. These life-list destinations are only part of what you’ll see on the 700-mile roadway. It’s not a route to rush, but one to wander, taking in many memorable sights and storied places along the way.

The route starts here. Situated in the south-western corner of Wyoming near the Utah border, Evanston serves as the Uinta County seat. There’s some disagreement about the town’s namesake. Some claim it was James E. Evans, a surveyor for the Union Pacific Railroad. Others believe it was John Evans, second governor of the territory of Colorado. 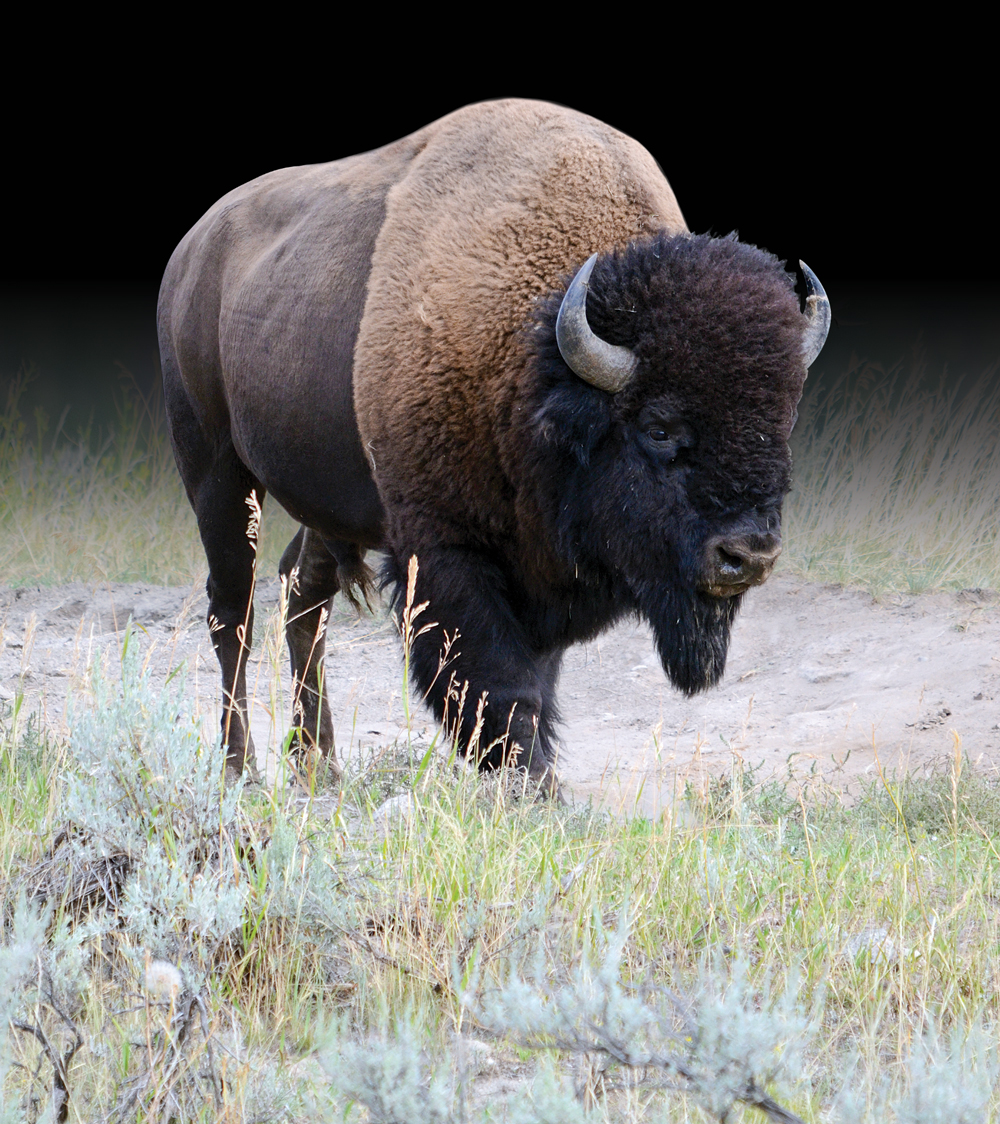 Bison are a protected species in Yellowstone National Park and are a common sight.

Like many railroad towns in the Old West, Evanston was established when the Union Pacific Railroad came through the area, in this case in the 1860s. It survived as a depot because of abundant water and a nearby coal mine, both critical needs of early steam-powered locomotives. The 1912 brick roundhouse, used for servicing locomotives, is the only complete railway roundhouse between Omaha and Sacramento on the Union Pacific line.

Before getting on Route 89, it’s worth exploring Fort Bridger State Historic Site, between Evanston and Green River, a trading post for pioneers and miners dating back to the 1840s. The reconstructed site hosts one of the largest mountain man festivals in the country, Fort Bridger Rendezvous.

From Evanston, Route 89 curves west into Utah for about 45 miles, then reenters Wyoming where it meets U.S. Route 30. Routes 89 and 30 are the same for another 30 miles, heading north along the western edge of Wyoming, then Route 30 veers west into Idaho.

Route 89 continues north through Bridger-Teton National Forest, passing through Hoback Junction and into the resort town of Jackson. If you are interested in outdoor recreation, you could camp in the area for a week and never do the same activity twice. The Hoback and Snake rivers are well known for trout fishing, and hiking trails ribbon the area. Horseback riding, wildlife viewing, whitewater rafting, ATV tours, golf — you can wear yourself out just imagining the possibilities. But keep on driving. The sites keep getting better and better.

From Jackson, Route 89 passes through the 25,000-acre National Elk Refuge. Created in 1912 to provide winter range for one of America’s largest elk herds, the refuge allows between 5,000 and 7,000 elk to migrate from Yellowstone National Park to meadows, marshes and sagebrush flats. 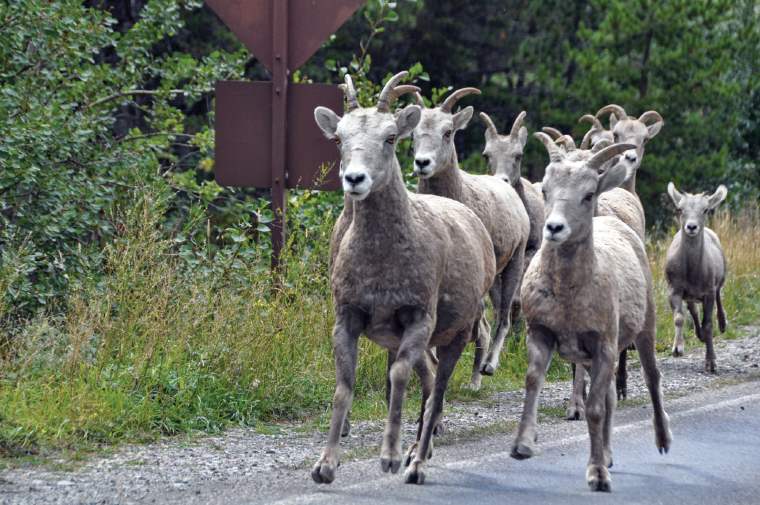 Bighorn ewes and lambs trot beside the road in Glacier National Park.

The odds of seeing elk here in the summer are low, but you can often spot bighorn sheep in the rocky outcroppings, pronghorn and mule deer on the open prairielands, and trumpeter swans on Flat Creek. An occasional wolf or grizzly might also pass through. Although the National Elk Refuge was created to conserve elk, the habitat provides residence for 175 species of birds and 47 mammals.

Just north of the National Elk Refuge, Route 89 enters Grand Teton National Park. You can ogle the spectacular Tetons from a number of pullouts along the road. The park was established in 1929 to protect these peaks and the lakes at their base, then expanded in 1950 to include a large portion of the valley through which Route 89 passes. 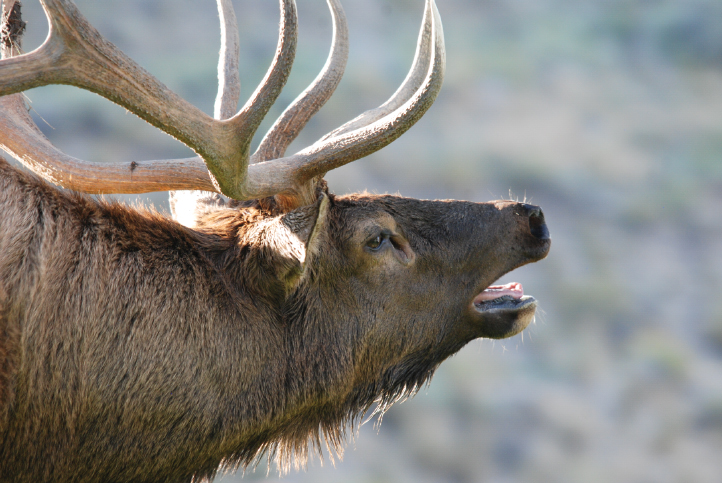 The park’s glacially formed lakes are a big draw. Motorboats up to 10 horsepower are allowed on Jenny and Jackson lakes. Sailboats and windsurfers are allowed on Jackson Lake. Canoe and kayak paddlers can explore Jenny, Jackson, Bradley, Taggart, Leigh and String lakes, among others. Visitors can also take a scenic cruise across Jenny Lake and then hike to waterfalls and other spectacular viewpoints.

One artifact of interest in the park is the Colter Stone, a piece of rhyolite in the shape of a human head. It is engraved with “John Colter” on one side and “1808” on the other. Though scientists and historians debate the authenticity of the stone, some consider it proof that John Colter, the famous guide and trapper, passed through the Yellowstone-Teton region during the winter of 1808, the first non-Native American to do so.

What is known is that Colter traveled south to north through what is now Yellowstone National Park, but his specific route is only a theory based on what he told others afterward. One common view is that he traveled through Jackson Hole, over Teton Pass and along the Teton Range. The Colter Stone was found along this route and may literally be the only hard evidence of his trek. Whether it was truly left behind by the man may never be known.

Colter called Yellowstone “the land of fire and brimstone.” It’s easy to understand why after watching Old Faithful and other geysers erupt. 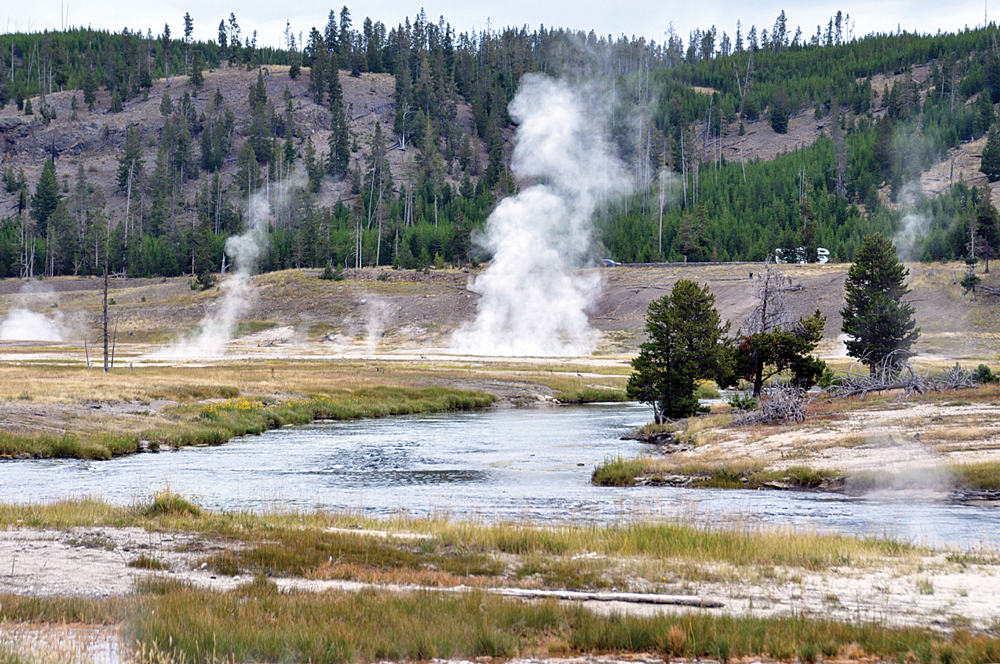 Geysers, fumaroles, hot springs and other geothermal features are common throughout
Yellowstone National Park, and many are visible from the road.

After leaving the Tetons, you immediately enter Yellowstone National Park, and Route 89 becomes the John D. Rockefeller Jr. Memorial Parkway. The scenic drive heads up the west side of Yellowstone, passing many of the park’s must-see’s including Old Faithful, Norris geyser basin and the sulfur terraces at Mammoth Hot Springs.

If you have time, it’s worth swinging east in the park at Norris. The road goes by Canyon Village and then over Dunraven Pass to the trailhead for Mount Washburn. Mount Washburn (elevation, 10,243 feet) is Yellowstone’s highest point but an easy 3-mile hike up a broad, well-maintained dirt path. Along the way, you’ll likely see bighorn sheep on the trail and, near the top, endangered pika scurrying among the rocks. As the road swings back west to Route 89, it passes several of the park’s most impressive waterfalls, including Tower, Wraith and Undine.

Route 89 exits Yellowstone through the recently updated Gardner Gate, then continues north another 56 miles to Livingston. In July 1806, Captain William Clark and Sacagawea of the Lewis and Clark Expedition camped here before floating the Yellowstone River to reunite with Captain Meriwether Lewis.

Originally known as Benson’s Landing, Livingston began as a trading post on the Yellowstone River about 3 miles from its present location. In 1882, the Northern Pacific Railroad changed the name to Clark City, after one of its contractors, then relocated the town to its current location and renamed it again in honor of Johnston Livingston, one of the major stockholders in the railroad.

The original gateway into Yellowstone, Livingston grew in large part because of the railroad’s promotion of the park as an international tourist destination. Calamity Jane lived in this frontier town for two decades and entertained visiting European royalty.

Now with a population of 7,044, Livingston remains a popular tourist stop. The Livingston Depot houses a railroad museum, the Yellowstone-Gateway Museum, which preserves the archeological history of the region, and the International Federation of Fly Fishers Museum, which contains a century’s worth of angling artifacts and literature from all over the world. 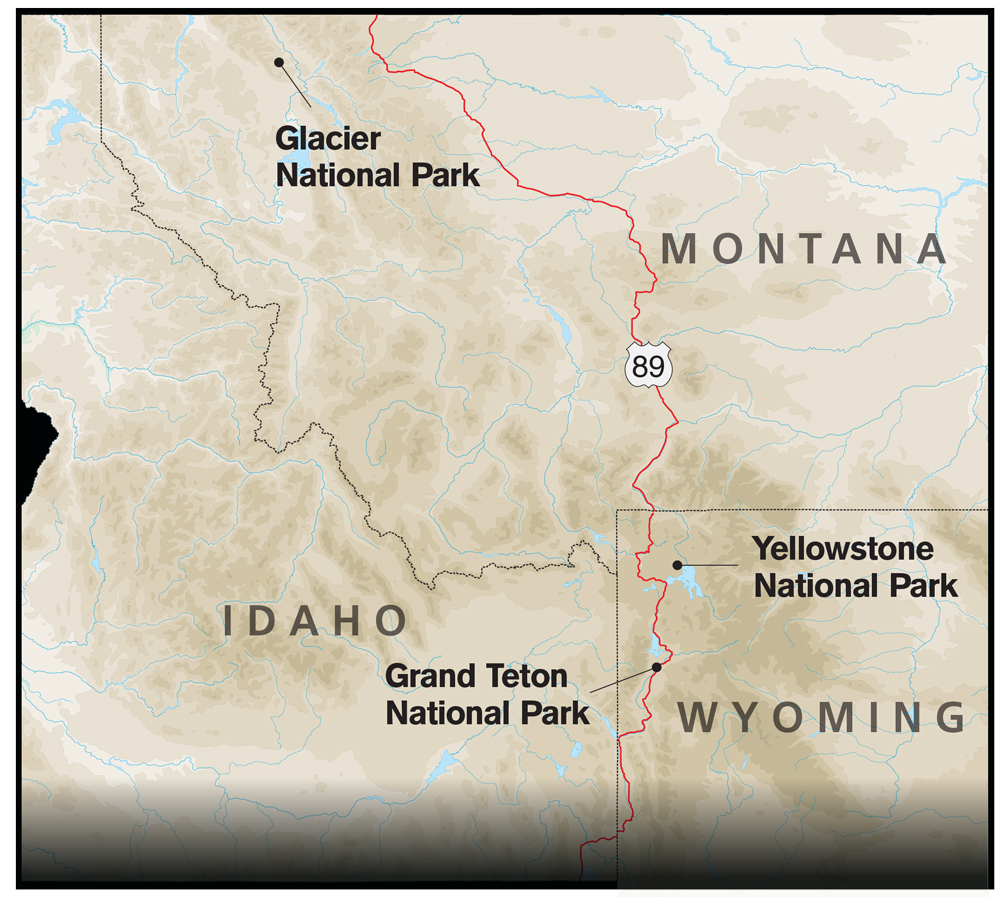 Livingston is also among Montana’s centers of art and film. It was the location for “A River Runs Through It,” and “The Horse Whisperer.” Actors Peter Fonda and Margot Kidder, Saturday Night Live alumnus Rich Hall, musician Ron Strykert (Men at Work) and novelist Walter Kirn (Up in the Air) live here. And Jimmy Buffett mentions the town in a number of songs, including “Livingston Saturday Night,” and “Livingston’s Gone to Texas.”

From Livingston, Route 89 passes through Lewis and Clark National Forest en route to Great Falls. From there it angles northwest through the town of Choteau, near the Bob Marshall Wilderness. It rolls on through the Blackfoot Indian Reservation and finally comes to an end at St. Mary on the eastern side of Glacier National Park.

Arguably the most memorable section of road begins at the end of the journey, the Going-to-the-Sun Road. This 50-mile mountain byway traverses the heart of Glacier National Park. An astonishing feat of engineering and a national historic landmark, the road was built by the Civilian Conservation Corps during the 1930s. It climbs 18 miles past Lake St. Mary to the top of Logan Pass, and then descends to the western park gate at West Glacier. Along the way, the odds are high of seeing mountain goats and bighorn sheep among the craggy cliffs beside the road.

If you plan to drive the Going-to-the-Sun Road, leave your trailer at the campground. Vehicles longer than 21 feet or wider than 8 feet are not allowed, and vehicles taller than 10 feet don’t fit under the cliffy overhangs. Another option is to take a guided ride over Logan Pass in one of the park’s antique touring cars.

These are only a few of the high-lights along Route 89 in Montana and Wyoming. You won’t be disappointed on this exceptional tour of the northern Rocky Mountains, which offers not only epic views and memorable outdoor adventures, but also a sense of the lives of some of the key pioneers and personalities of the Old West.

What to Know & When You Go 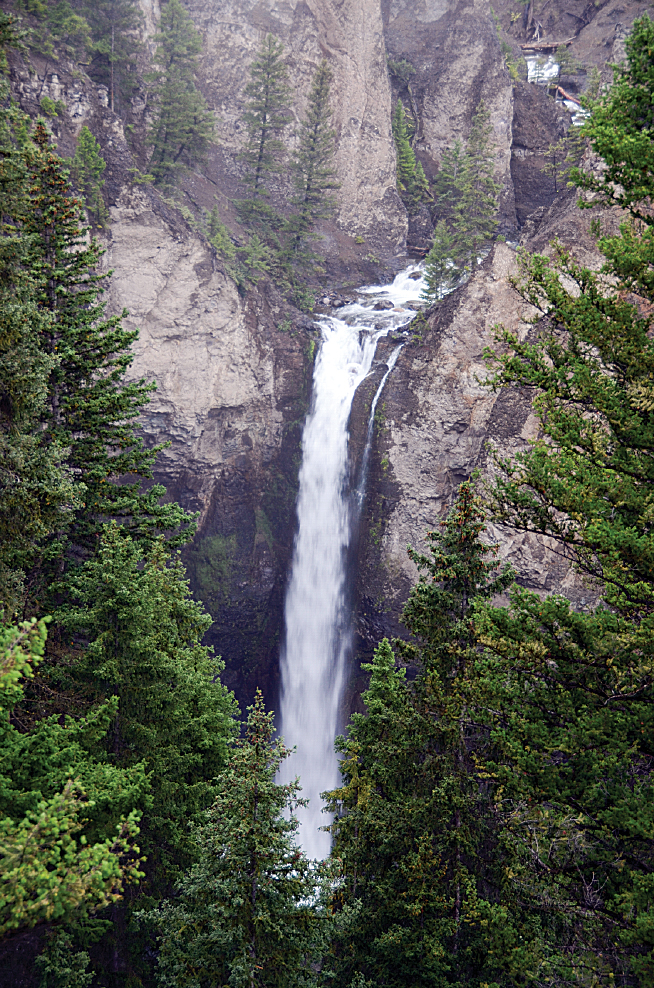 Plummeting 132 feet into a canyon, Tower Fall is one of the most popular waterfalls in Yellowstone National Park.

Purchase a National Parks and Federal Recreational Lands Pass at or at the entrance to Grand Teton National Park, the first park you’ll enter heading north on Route 89. The annual pass is cheaper than paying individual entrance fees at each park, and it gets you into all National Park Service, USDA Forest Service, U.S. Fish and Wildlife Service, Bureau of Land Management and Bureau of Reclamation sites that charge day-use or entrance fees.

The northern stretch of U.S. Route 89 passes through three of America’s grandest national parks. Public campgrounds at all three parks accommodate RVs with everything from primitive campsites to electric-only and full-hookup sites. Check the campground information on the individual national park websites for RV-length restrictions, which vary from campsite to campsite. Make reservations in advance, when available, particularly for visits during the peak summer months or if you own a sizable RV and require a larger site.

Route 89 has no shortage of scenic pullouts, including this one near Yellowstone.

Campsites in Glacier National Park are first-come, first-served with the exceptions of Fish Creek and St. Mary campgrounds. The park’s largest campground, Apgar, has 194 sites, 25 of which can accommodate RVs up to 40 feet.

Five campgrounds in Yellowstone National Park accept online or phone reservations. The other seven campgrounds are first-come, first-served. Fishing Bridge is the park’s only campground with water, sewer and 50-amp hookups.

RV resorts and campgrounds that offer a variety of amenities can generally be found close to the national park entrances. For information about commercial RV parks, including Good Sam Campgrounds, go to the Good Sam Club website.
www.goodsam.com