Places to Go & Things to Do
from the issue

From the best places to view wildlife and otherworldly wonders to where to stay and play, here’s a rundown on the finest that America’s first national park offers.

In 1872, Yellowstone became the first national park in the world, which, according to the United States Congress, was “…dedicated and set apart as a public park or pleasuring-ground for the benefit and enjoyment of the people.” It is a rare person, indeed, who doesn’t have this iconic park, located in the northwest corner of Wyoming but overlapping into Montana and Idaho, on their life-list of American destinations. But how to best enjoy a visit to this hydrothermal and geological marvel?

Yellowstone National Park is a big place, encompassing just less than 3,500 square miles. It’s also exceptionally diverse. Wildlife watching and geothermal features are certainly among its more famous draws. In addition, the mountains, lakes, and streams within the park are an outdoor playground for hikers, cross-country skiers, anglers, and paddlers. There’s much to experience in this impressive, expansive preserve.

Planning a visit to Yellowstone is best boiled down into two decisions: What you most want to do and whether you’re willing to walk a few steps off the main park roads or not. To help you narrow down the possibilities into an ideal itinerary, here’s how locals cherry-pick the park. 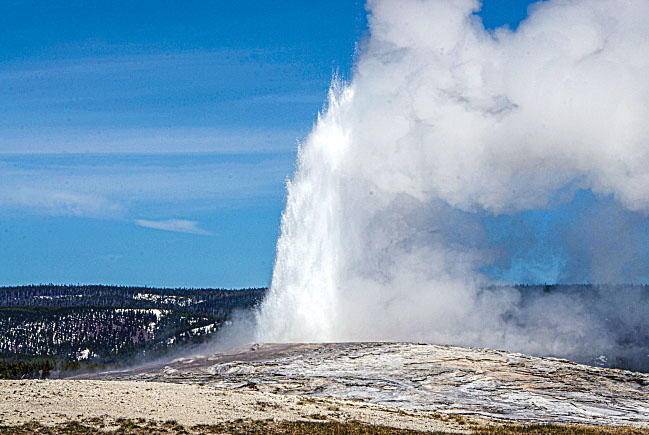 The famous Old Faithful Geyser is just one of the 465 geysers that erupt at least once per year at Yellowstone.

If You Want to See Wildlife

Bison: The Lamar Valley, often called America’s Serengeti, used to be the best place to see bison, but nowadays, the Hayden Valley in Central Yellowstone is the more likely plain where herds of these huge animals gather and graze.

Elk: One of the largest of the deer-family species, they congregate around Mammoth Hot Springs, especially during the fall. That’s also the time to look for elk elsewhere in the park if you want to see majestic bulls with their fully developed antlers. Scan the smaller hillside “parks” (meadows), the edge of airier timber, and around the sagebrush flats. You might spot a mule deer, too.

Wolf Packs: There are at least 10 established wolf packs in Yellowstone, mainly in the northern part of the park and particularly in the Lamar Valley. Winter is a good time to wolf-watch. You may hear them first.

Grizzly Bear: For the best chance of seeing a bear, especially a grizzly, visit the park during the spring when they emerge from hibernation. You might spot a sow nursing her cubs in the sunshine on a hillside, or a big boar turning over rocks in search of grubs. Once a bear gets on a food source, it tends to stay there for several days. Friendly rangers readily reveal these spots. In general, bears are typically found in the Lamar Valley, Swan Lake Flats, and the Hayden Valley, though they might be anywhere in the park. Always carry pepper spray when you leave your vehicle and stay at least 100 yards away from any bears you spot.

Pronghorn: Able to reach running speeds up to 55 mph, they love to graze on the hillside on a small sliver of the park near the Roosevelt Arch. Instead of going through the North Entrance, turn onto Old Yellowstone Trail, a minor road that parallels US Route 89 on the opposite side of the Gardner River.

Bighorn Sheep: These are often grazing and bedding down beside the footpath (dirt road, really), up Mount Washburn on Dunraven Pass. 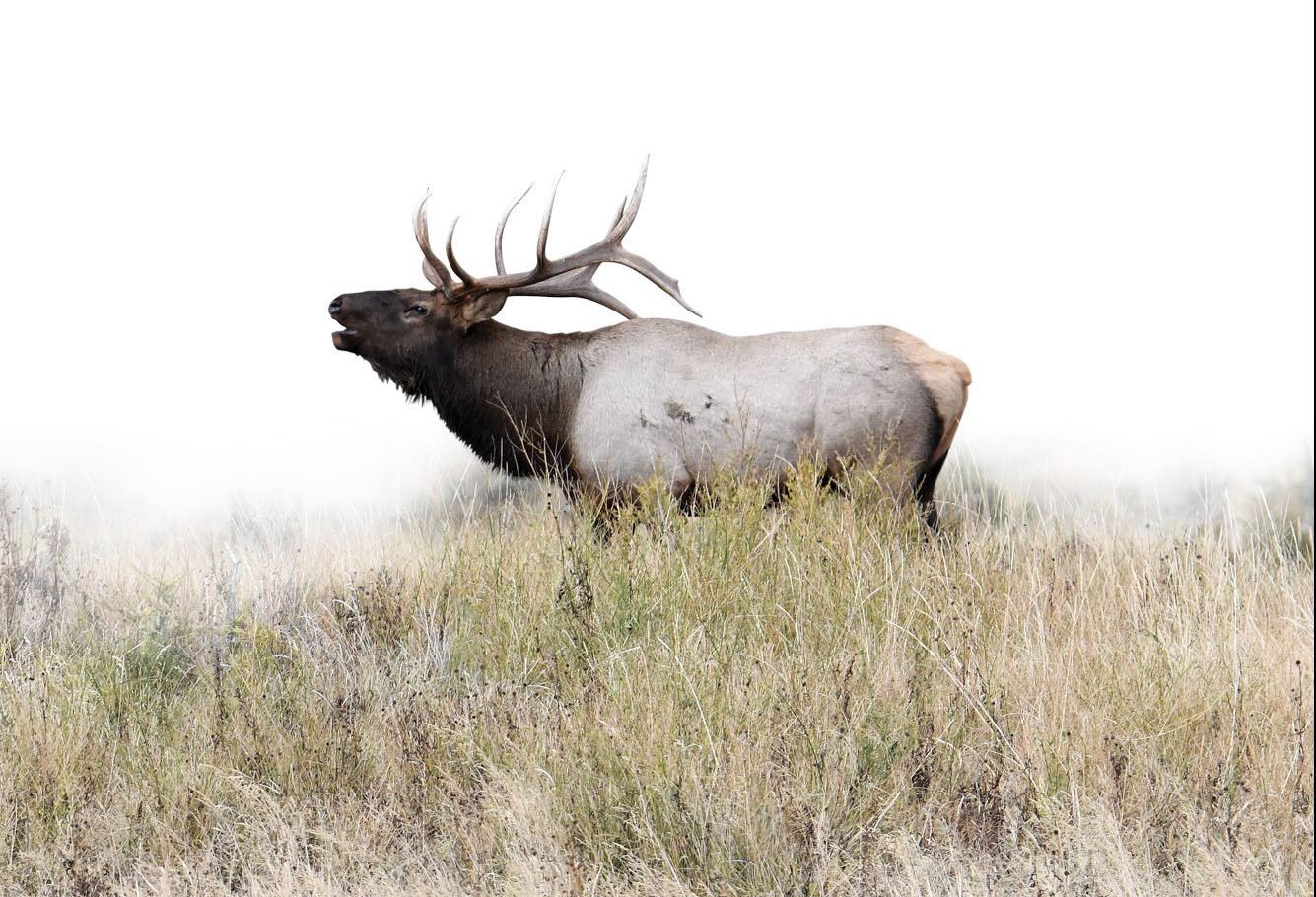 An elk bull bugling in Yellowstone.

If You Want to See Geological Wonders

Yellowstone National Park sits atop a massive super-volcano that provides the heat and energy for its 10,000 geysers, hot springs, mud pots, and other fascinating geothermal features. An eruption about 630,000 years ago created the massive caldera in which most of the park is contained. Don’t worry. The last time an eruption of any size took place was approximately 70,000 years ago. Scientists don’t anticipate another one for another 10,000 years. In the meantime, don’t miss these geothermal hotspots:

Old Faithful Geyser: Half of the world’s geysers, 500 total, are in Yellowstone. Old Faithful is the most famous, though it’s not exactly regular, erupting every one-to-two hours. Find out when the next one is predicted inside the education center by the geyser. While you’re waiting, follow the boardwalks along numerous other geothermal features. There are no benches on this side of Old Faithful, but the view is just as good and there’s a lot less competition for the photo opp.

Steamboat Geyser: Located in Norris Geyser Basin, Steamboat Geyser is the tallest active geyser in the world, sending a fountain of boiling water an average of 300 feet into the air during a major eruption. Unpredictable but violent, it also spews mud and debris skyward amidst a roar that will awaken you at Norris Campground, a mile away.

Mammoth Hot Springs: One of the few active travertine terraces on the planet, the multiple levels of white limestone “shelves” and the glistening, steaming water are mesmerizing. After you get a good look, continue upward along the boardwalks for a superb view over the terraces toward the original Fort Yellowstone encampment, which is now the park’s headquarters, and the surrounding countryside. 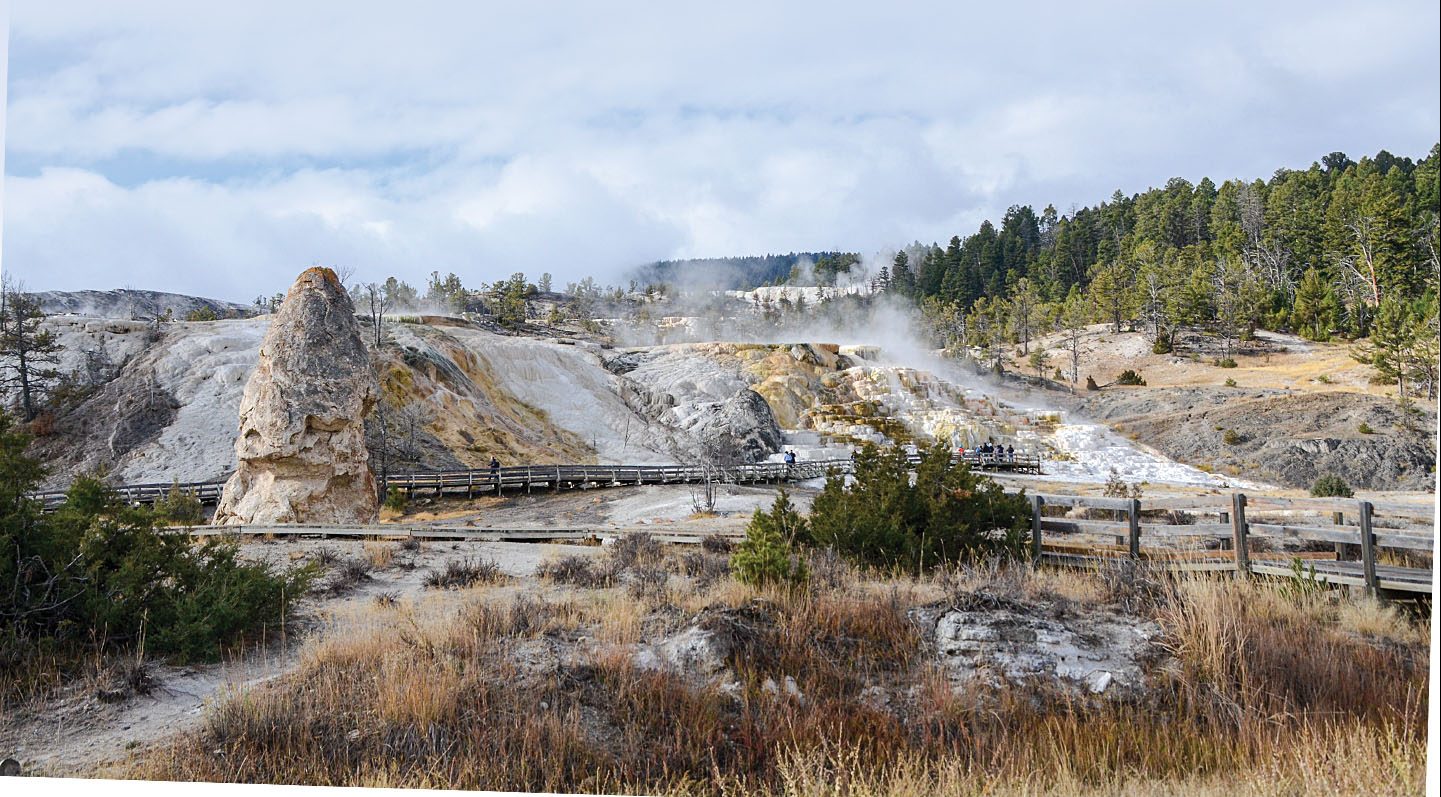 “Mammoth Hot Springs is one of the few active travertine terraces on the planet.”

Biscuit Basin: Visitors love to photograph the Grand Prismatic Pool due to its vibrant hues and large size, but the brilliant blue Sapphire Pool at Biscuit Basin is equally eye-catching. The half-mile boardwalk around this geothermal area is filled with other colorful, bubbling features, including several geysers, and it’s usually less crowded.

If You Want to See Waterfalls

Yellowstone’s waterfalls wow visitors as much as its geysers. Of the park’s 45 or so named waterfalls, these two are special:

Artist’s Point: Artist’s Point, on the southern rim of the Grand Canyon of the Yellowstone, provides the best view of the park’s most impressive cascade, the 308-foot torrent known as Lower Falls which is the lower tier of Yellowstone Falls. In 1883, Frank Jay Haynes, a professional photographer who documented much of the northwestern United States, falsely believed Thomas Moran, one of the great 19th-century American landscape artists, painted Lower Falls from this spot, but the name stuck.

Fairy Falls: It’s a flat 1.6-mile hike to this 200-foot cascade, located in Midway Geyser Basin. Add another 1.2 miles, and you can also see Spray and Imperial geysers. The waterfall suddenly appears in a clearing beyond a jumble of downed timber. It resembles delicate, white strands of fairy hair tumbling off a tall rock cliff. Beware, entertaining ground squirrels or cheeky ravens will try to steal your lunch as you marvel at the flowing water. 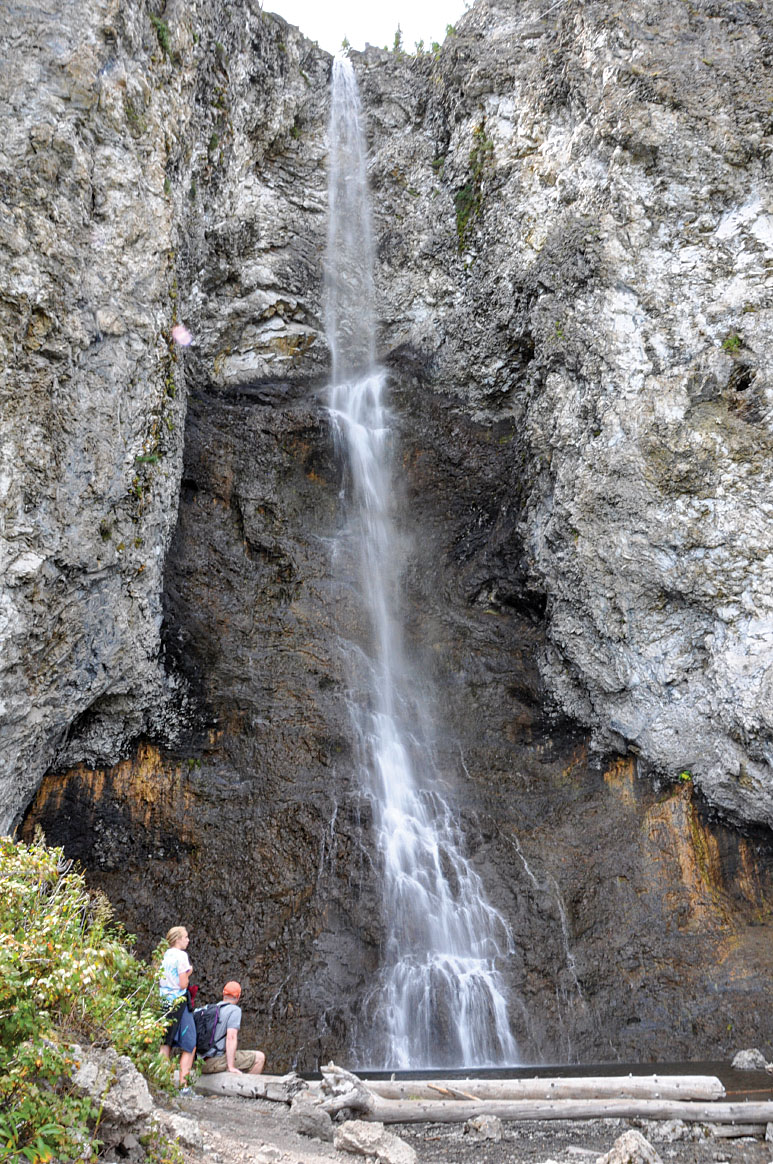 If You Want to be Active

While most people drive around Yellowstone, if you’re willing to step off the road, you may see a lot more wildlife and unique views while getting some exercise.

Hiking: With more than 900 miles of trails, Yellowstone is a hiker’s park. But, if you can only pick one route, consider Mount Washburn (10,243 feet). Both routes — from Dunraven Pass and up Chittenden Road Trail — climb 1,400 feet in three miles. It’s one of the more popular hikes in the park with good reason. You’ll likely see bighorn sheep mid-trail and endangered pikas among the rocks near the summit.

The observatory on top is an active fire tower with an interpretive center. In July, the mountain is a wildflower garden. Bring lots of layers, a hat, and gloves, as it can snow any month of the year. Carry bear spray, as bears frequent Mount Washburn, especially during the fall when they gorge on white-bark pine nuts here.

Fishing: Anglers tend to stick to the park’s rivers, but if you want to catch big cutthroat trout, hike 0.3 miles to Trout Lake. If you’re fit, trek down to Seven Mile Hole in the Grand Canyon of the Yellowstone, where you’ll find good fishing in a dramatic setting.

Paddling: Lewis Lake and Shoshone Lake are good places to paddle a canoe, kayak, or SUP. Avoid Yellowstone Lake unless you’re an experienced paddler, and it’s a calm day. Yellowstone Lake is very cold and deep. If you do put in, go near West Thumb and stay close to shore.