8 Good Reason to Visit the Badlands

Why would any sensible traveler want to venture to a place named Badlands? Here are eight reasons – plus three nearby attractions – why you’ll want to pack up the motorhome and head for this exciting South Dakota National Park.

First called “mako sica” or “land bad” by the native Lakota people, Badlands National Park is truly a sight to see. Resembling a giant sand castle, the enormous pinnacles, canyons and rugged buttes were created from a flat flood plain about 500,000 years ago when water began to cut through the sedimentary rock layers. Today, when you enter the park, you’ll see flat prairie land on one side of the road and on the other side, you’ll see a vast expanse of magnificently sculpted peaks. Journey farther into the park and you’ll find a world alive and filled with fabulous formations with bold red and tan stripes and intriguing pink-banded yellow mounds. Travel the park’s paved Loop Road and each turn will present another view of this fascinating scenery filled with artistically shaped spires that will tempt the photographer in you. 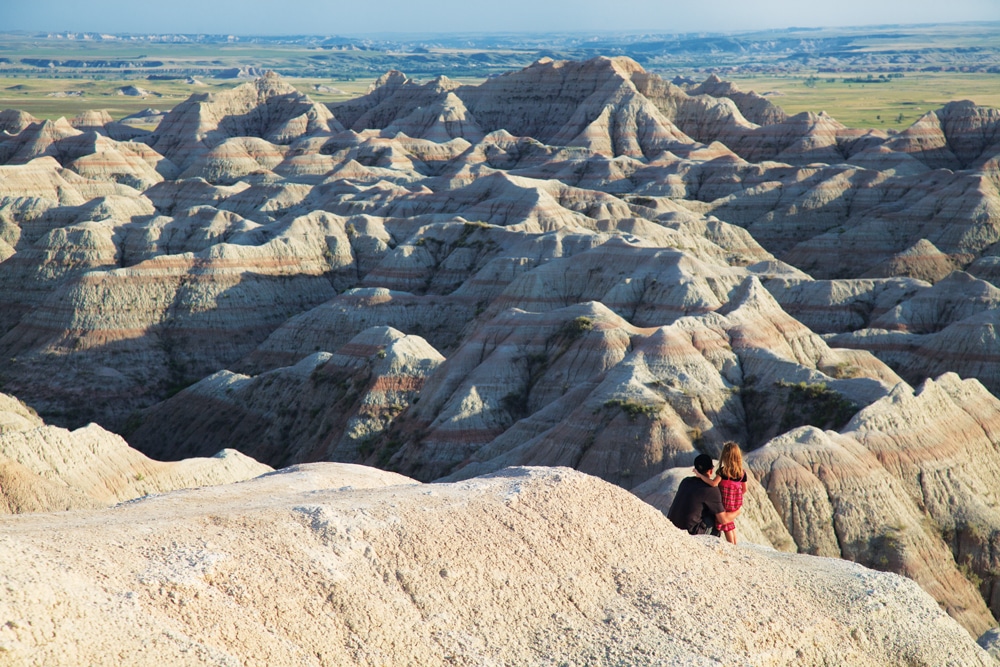 A man and child gaze at the wonder of Badlands National Park. Author John Madson once described the Badlands as, “an improbable kind of place, looking like the set of a science-fiction movie.”

After you enjoy a drive through the park, be sure to get out of the motor­home and take a walk among the rugged spires. There’s a trail for everyone. A hiker’s paradise, the 244,000-acre park offers trails from accessible ¼-mile boardwalk trails to a 10-mile-long trek. You may choose to walk on flat prairie land or take an uphill climb in this spectacular landscape. Want to venture off trail? You’re permitted to wander off the trails in this park because like a crashing wave washes away a sand castle, as soon as it rains in the Badlands, your footprints disappear. 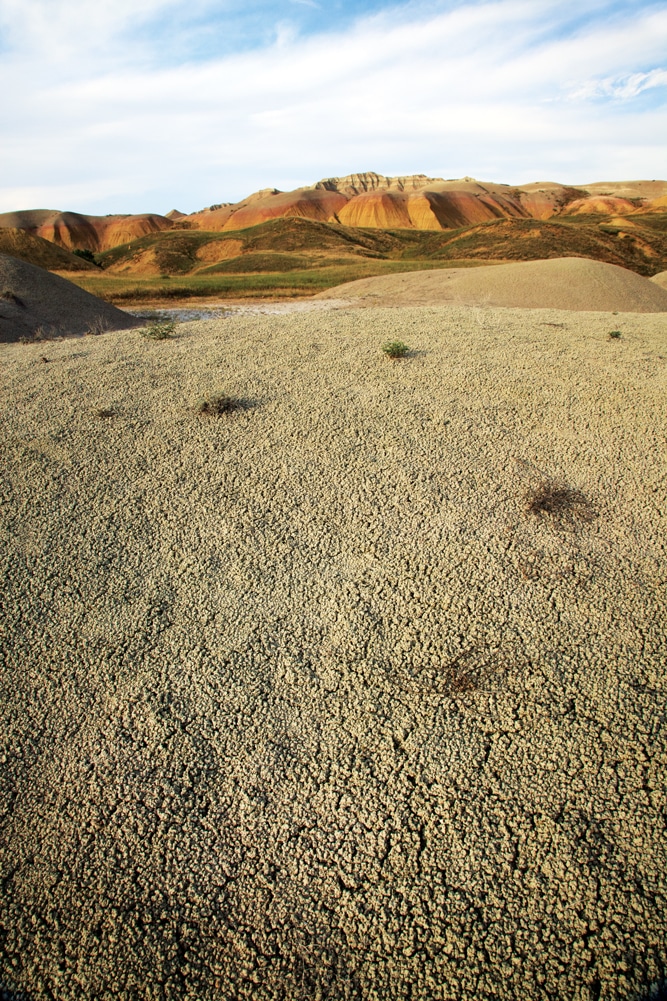 Take a few steps on this ground that crunches under your feet and you’ll know why they call it, “popcorn soil.”

Some of the oddest geological sights you’ll see are right at your feet. The consistency of the soil varies in the park; in some areas, it’s very loose and crumbles, making it difficult to get a foothold. In other areas, you’ll feel a unique crunch, crunch, crunch under your feet – this is popcorn soil. Also called, “popcorn rock,” it is created from bentonite, a clay mixed with volcanic ash that when wet, can expand 20 times in size. As the clay repeatedly absorbs water and then dries out, it swells and shrinks producing the strange substance under your feet. Armored mud balls sound just like their name. Sitting randomly on the ground surface, mud balls are created when rainwater pushes mud through a wash, gathering more mud and pebbles as it rolls the mixture into balls. You’ll find both popcorn soil and mud balls add a bizarre, yet intriguing element to the Badlands. 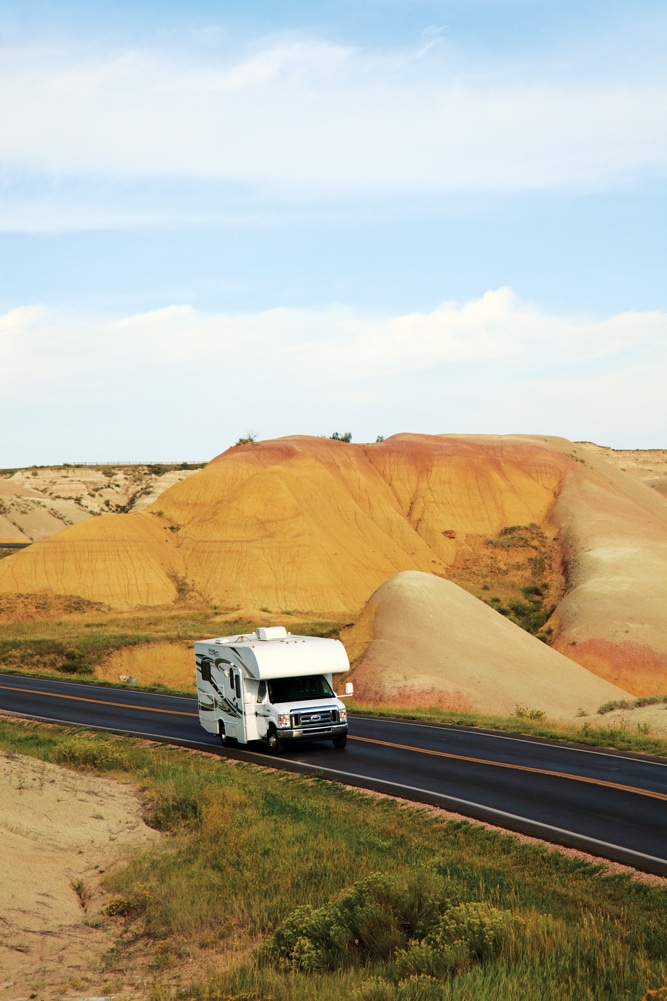 The park’s Yellow Mounds have a distinct color due to the fossil soil.

As you drive or walk in the Badlands, you’ll enjoy the park’s wonders with fewer crowds than many other national parks. While nearly 1 million people visit the Badlands every year from all over the world, when you compare that to the more than 3 million people who visit Yellowstone National Park each year, you’ll really enjoy the Badlands’ wide-open spaces! 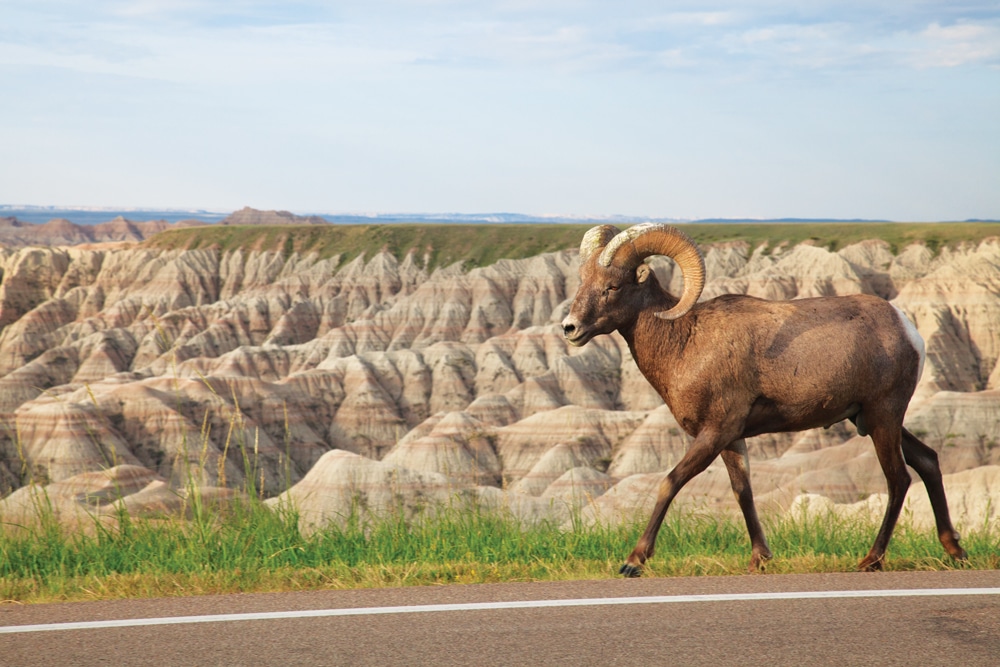 Bighorn sheep can be spotted along the roadway.

You won’t have to look far to find wildlife in the Badlands. With fewer people in the park, there is a greater opportunity to see animals in a natural, undisturbed environment. Even though the park has more than 64,000 acres of designated wilderness, you’re likely to see wildlife right from your motorhome. The best chance to see animals will be in the morning or early evening when you could easily see antelope, deer or bighorn sheep wandering close to the road. The park is also home to other wildlife including bison, turkey and the endangered black-footed ferret. Be sure to watch for the large prairie dog town located alongside the park road; the little “dogs” won’t mind seeing your motor­home drive past them, but if you get out to take a closer look, be prepared to hear a lot of barking. 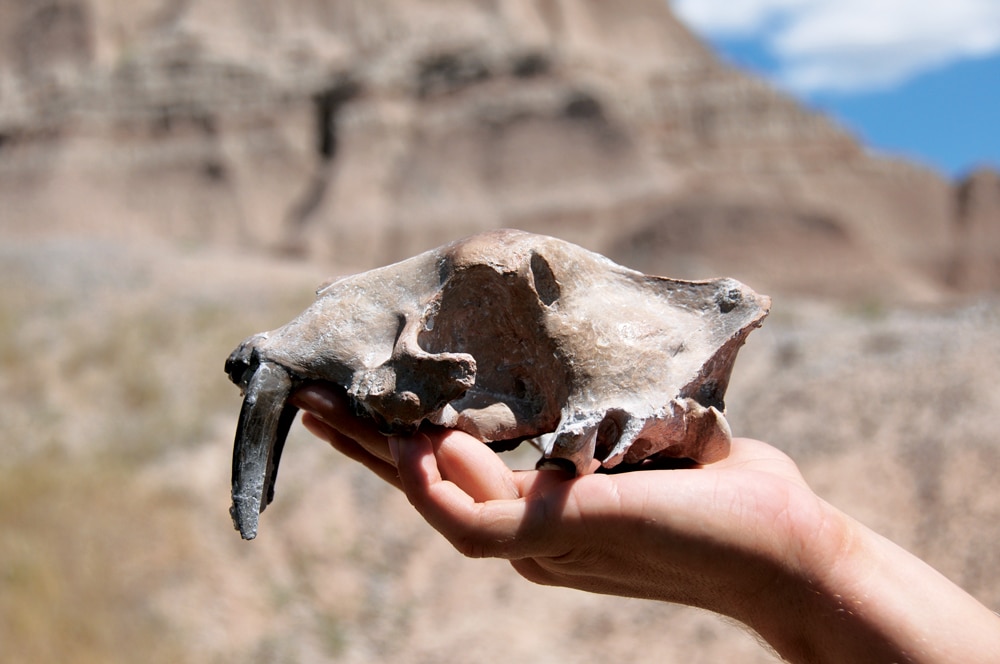 As you gaze at the dry, massive pinnacles in the park, it’s hard to believe that this region was once an inland sea that developed into a tropical rainforest. When the Lakota people found large fossilized bones and seashells, they correctly reasoned that this land was once covered by water and the bones were from animals that no longer existed. The park is a paleontologist’s dream; even the unusual Yellow Mounds are actually fossil soil known as paleosol. Be sure to visit the Fossil Exhibit Trail; it’s an easy ¼-mile boardwalk trail that showcases replicas of some fascinating extinct creatures – including hyracodon, a small, speedy rhinoceros and merycoidon, an animal about the size of a sheep with fangs on both upper and lower jaws.

Fossil specimens from the Badlands are found in major museums as far away as Europe. It’s interesting that Badlands National Park has the world’s richest deposits of fossils from the Oligocene epoch, but it’s exciting to know that visitors have made some of the amazing fossil discoveries. Two visitors once found a large fossil backbone near a picnic area that led to fieldwork uncovering 10,000 fossils! Near the visitor center is a region called the “Saber Site” because that’s where a 7-year-old girl found a rare, well-preserved saber-tooth cat fossil. 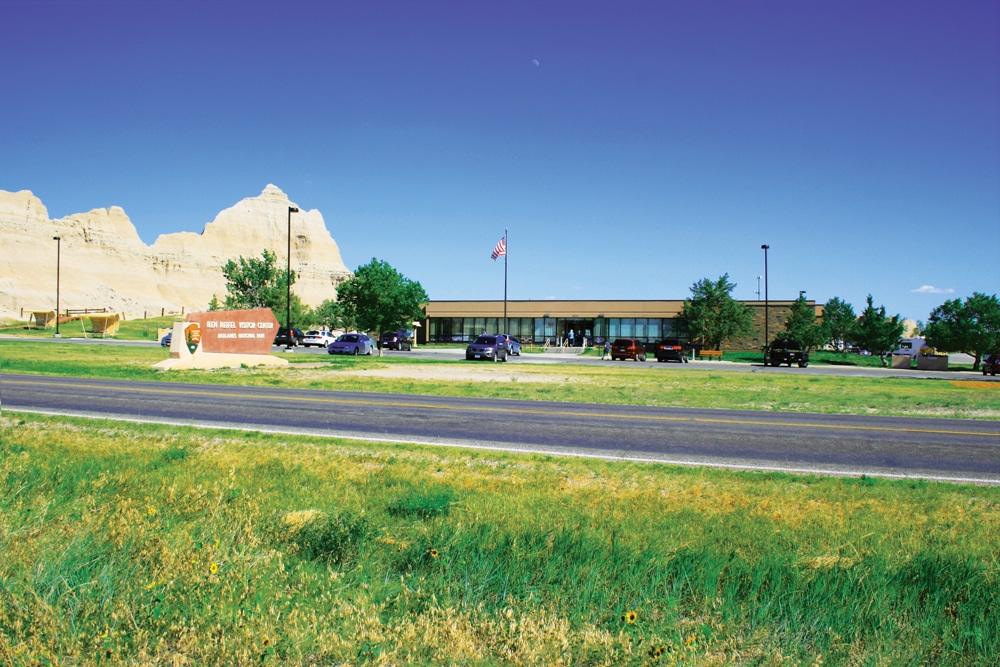 If you want to see what happens with all those fossils, you’ll want to stop at the Ben Reifel Visitor Center. Here you can visit a working paleontological laboratory. Captivating to watch, the paleontologists prepare fossils found from various sites in the park including the Saber Site. The visitor center offers interactive exhibits such as assembling a virtual skeleton on a touch screen and a hands-on display of fossilized animal casts. The 95-seat air-conditioned theater showcases the natural and cultural history of the Badlands. The visitor center’s namesake, Ben Reifel, was the first congressman from the Sioux Nation. Nearly half of the park is located on the Pine Ridge Reservation and includes several sacred sites of the Oglala Lakota. The National Park Service and the tribe co-manage this mostly undeveloped portion of the park known as the South Unit. Once used by the United States military as a practice aerial bombing range, the region still contains some World War II-era unexploded munitions. If you want to explore the South Unit, be sure to visit the park’s second visitor center, White River. It is located on the Reservation and is operated by the Oglala Sioux Parks and Recreation Authority. Here you’ll find additional exhibits and the information you’ll need to explore the South Unit of the park. 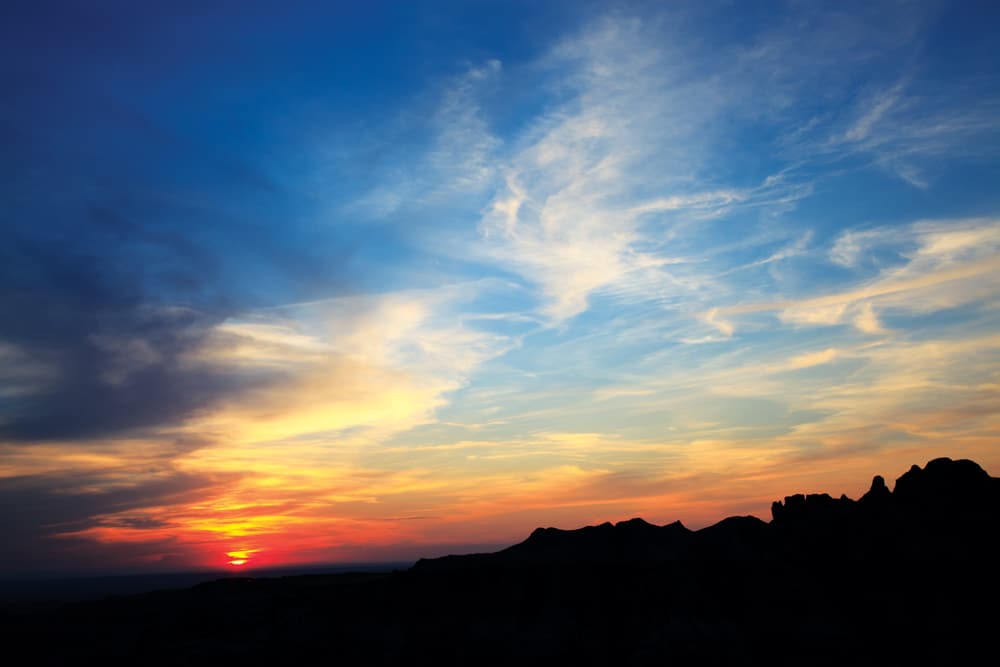 Enjoy the brilliant colors of the sunset framed by the black silhouettes of the Badlands peaks.

When the sun sets in Badlands National Park, the rock formations that appeared tan during the day begin to turn to warm shades of gold and red. Watch the sun set over the open prairie where you’ll see the vast colorful sky, or choose one of many spectacular spots such as Conata Basin. Here you can enjoy the brilliant colors of the sunset framed by the black silhouettes of the Badlands peaks. Look at the shapes of the pinnacles and remember that the Badlands are some of the fastest-eroding landscape in the world. Even if the original name of the park was going to be Teton National Park to avoid the negative sounding name of the Badlands, you’re glad you came to see this amazing world. After all, what’s in a name? While you reflect upon your visit to the Badlands, remember the words of Frank Lloyd Wright who said, “What I saw gave me an indescribable sense of mysterious otherwhere – a distant architecture, ethereal … an endless supernatural world more spiritual than earth but created out of it.”

As you stand and gaze at the ever-changing painting in the sky, watch the colors in the sky glow as night draws near. Listen to the soft rustle of leaves. The trees are few on the prairie but their leaves sound like wind chimes in the gentle breeze. Everything else is silence. It was a good decision to visit the Badlands.

The Town of Wall

In this eclectic town, you’ll find everything from exquisite Black Hills gold jewelry and quality Stetson hats to a mechanical piano-playing gorilla and a jack-a-lope so huge you can ride it. As you enjoy the famous Wall Drug store’s fine collection of Western art and museum-worthy historical photographs of soldiers and Native Americans, don’t be surprised when you hear a loud roaring and see flashing red lights as a gigantic Tyrannosaurus rex emerges from its slumber. Named for the more than 60-mile-long carved cliff known as the Badlands Wall, the town of Wall is also the home to the National Grassland Visitor Center and the Wounded Knee Museum, which documents the 1890 massacre of Lakota men, women and children. 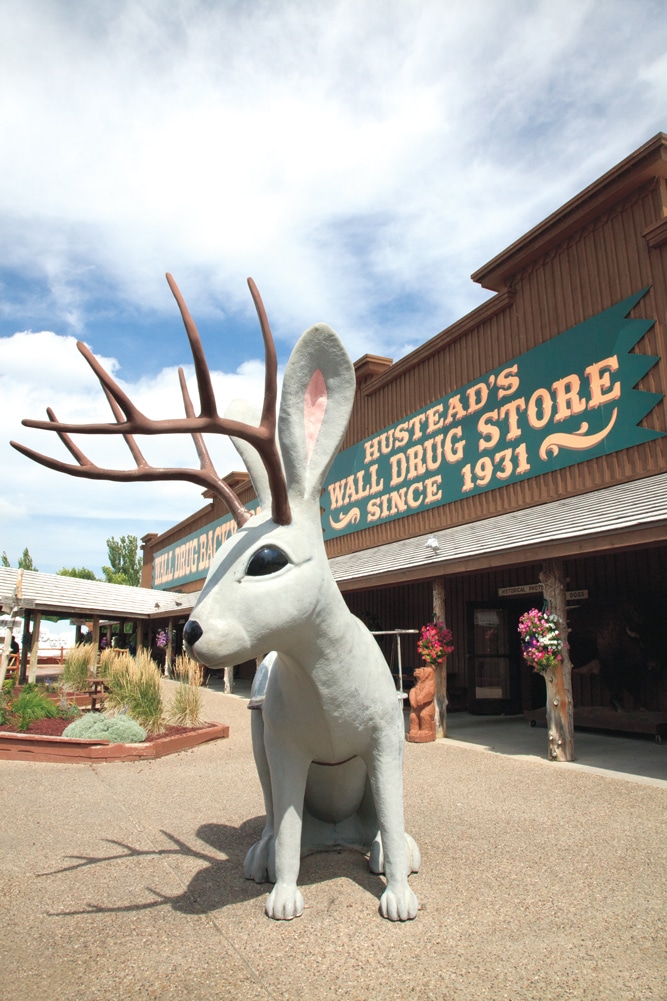 One of 20 National Grasslands, Buffalo Gap has nearly 600,000 acres in various areas of southwestern South Dakota, including a region near the Badlands. Here you can enjoy a plethora of outdoor activities with no admission fee. You may bike, hike and ride a horse or an ATV. Go hunting or fishing. Watch for more than 100 species of animals that make the grassland their home or try your luck at rock hounding. Check at the visitor center for the best locations to search for a variety of beautiful agates including the Fairburn agate, the state gem of South Dakota. 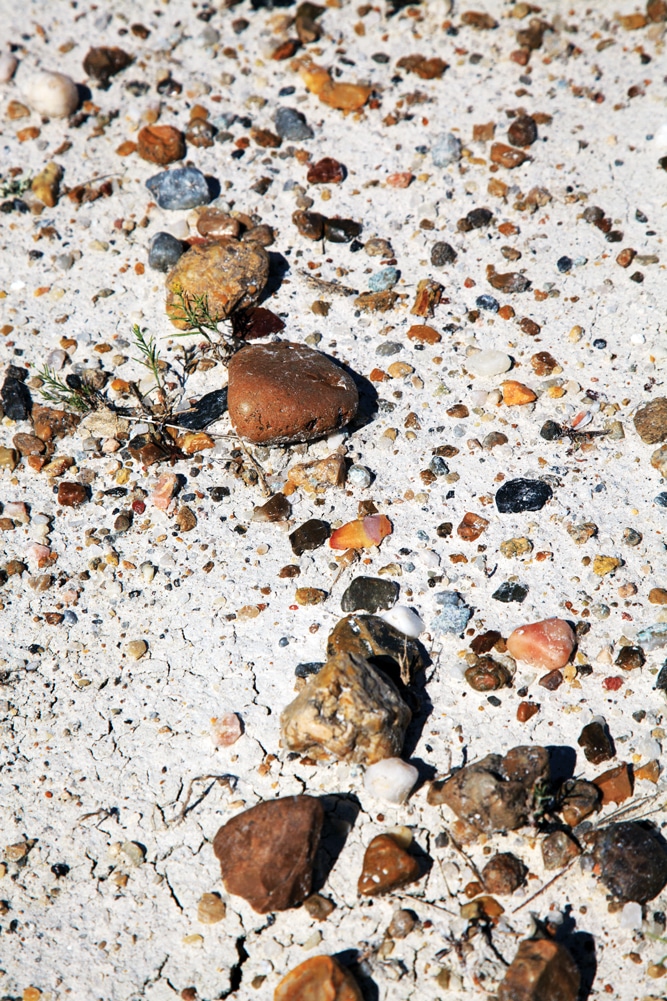 During the Cold War, Minuteman II missiles were hidden in the prairie grasslands of South Dakota. The missiles were located in remote underground silos and could be launched from miles away by crews stationed at control centers. Today, you can visit the deactivated Delta-01 Launch Control and the Delta-09 Launch Facilities for free. You’ll be treated to a ranger-guided tour of the control center where you’ll descend in an elevator to the underground control room. Walk through a thick vault and you’ll be transported to another time; a time when turning the keys in this control room could launch a 1.2-megaton warhead that would change the world. When you leave the control center, be sure to stop by the launch facility. As you listen to a self-guided cellphone tour, peer into the silo and know that a single Minuteman II missile had the explosive equivalent of more than a million tons of dynamite. Like a fossil buried in the ground is discovered and placed in a museum, the missile hidden here in the grasslands of South Dakota is now revealed and showcased for all to see. 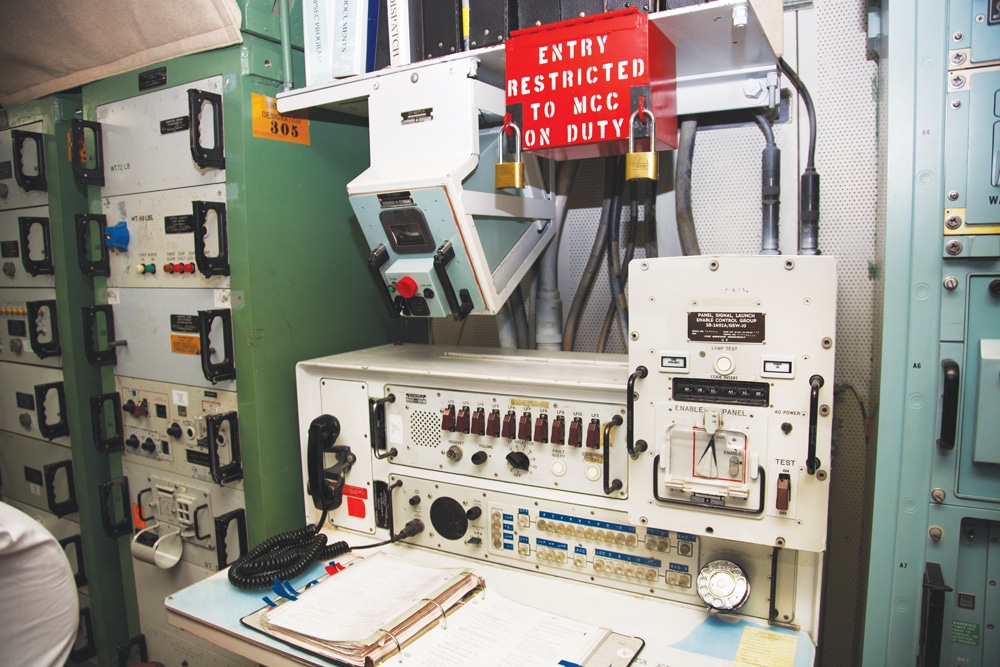 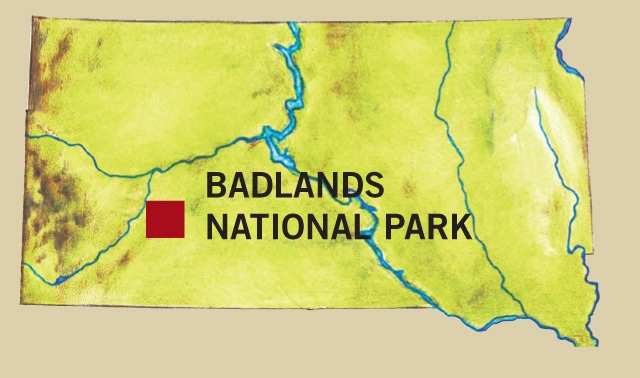 Travel in the Park