10 Wonderful and Wacky Museums to Visit

My husband, Jim, and I have found there’s no better way to learn about a nation’s people and their cultures than to visit museums. It’s where we can explore history and heroes, pastimes and passions, and collections from wonderful to wacky. Here are our 10 favorite unusual museums across America.

The last thing I expected to find in this tiny town was one of the world’s most expensive automobiles. The Gateway Colorado Auto Museum houses one of the finest collections of American cars in existence today. The Hendricks Collection, owned by Discovery Channel founder John Hendricks and his family, features more than 50 cars. The star attraction is the 1954 Oldsmobile F-88 Convertible. Developed as a concept car, it was to be destroyed, according to GM company policy, once it had outlived its marketing usefulness. Instead, it was disassembled, packed into crates and passed through several owners before it was restored. Hendricks acquired it in 2007 at the Barrett-Jackson Auto Auction for a record $3.24 million. 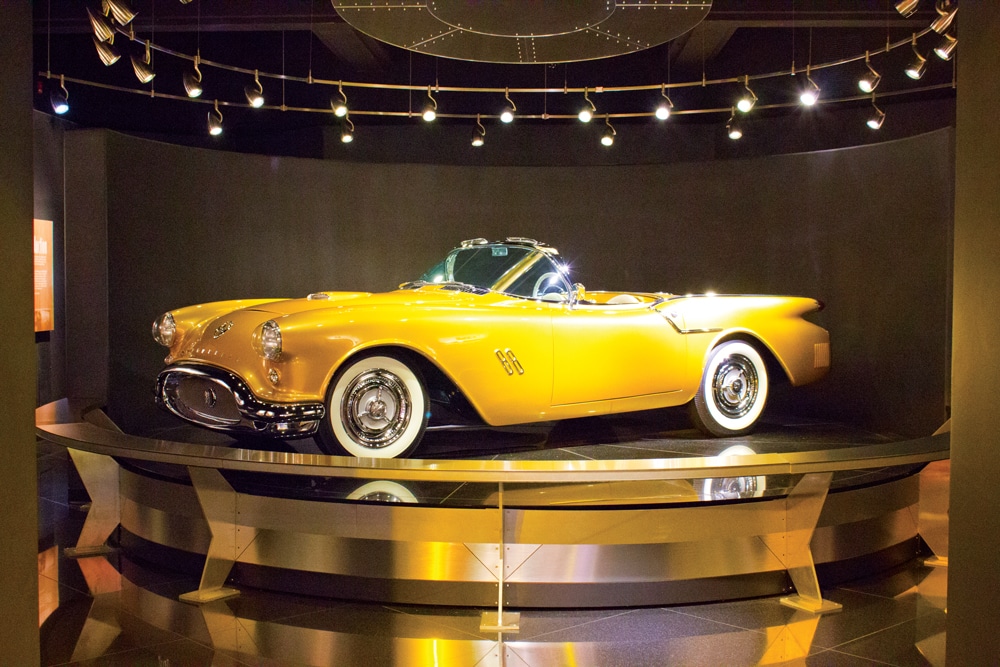 The 1954 Oldsmobile F-88 Convertible was acquired in 2007 at the Barrett-Jackson Auto Auction for a record $3.24 million.

The museum is part of Gateway Canyons, a 58-room luxury resort in the red rock canyons of western Colorado. Nearest RV parks are in Grand Junction, one hour northeast of Gateway.

Lucas, Kansas, population 392, is a hotbed of grassroots art, a term describing art made by people with no formal artistic training using ordinary materials in an extraordinary way. The Grassroots Art Center merges creativity with recycling, ingenuity with opportunity. Remember those removable pull-tabs popular on beverage cans in the early ’70s? Herman Divers used them to create a full-size motorcycle and a two-seater automobile. M.T. Liggett turned junk metal into folk art – with humorous political commentary – as evidenced by his sculpture of Kenneth W. Starr, Cigar Detective. Inez Marshall used hand tools to chisel limestone sculptures, including a 1,500-pound covered wagon, complete with three people and two mules. 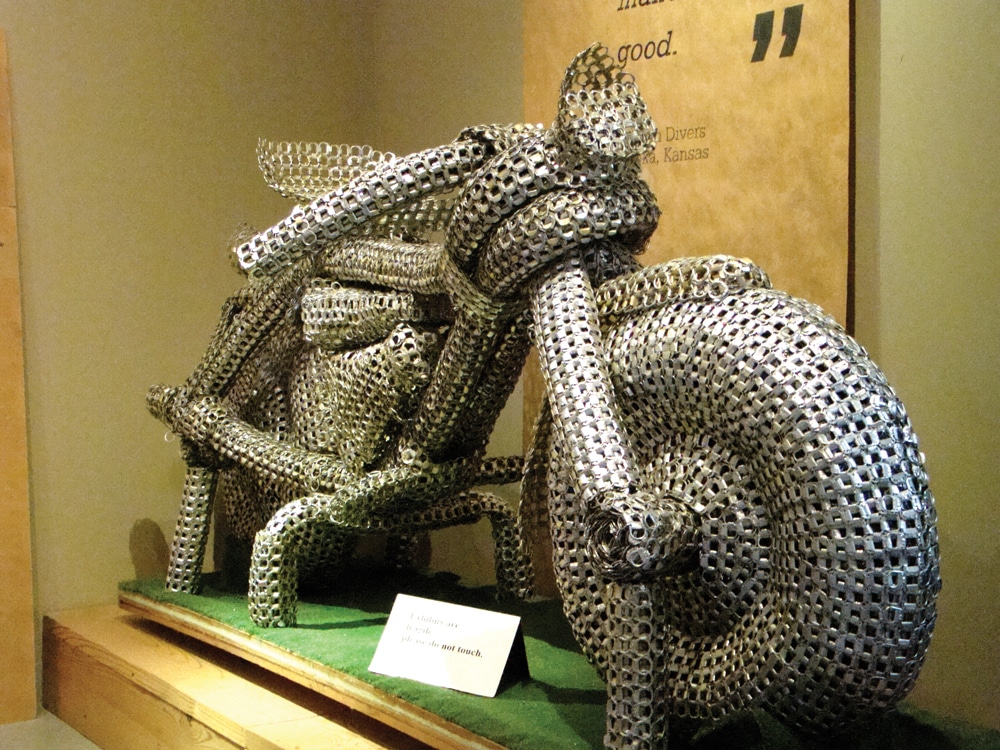 A tour of the Deeble House is included with admission to Grassroots Art
Center. From 1950 to 1999, Florence Deeble used rocks she collected on vacations to build fanciful versions of Mount Rushmore, Capitol Reef National Park and the Rocky Mountains in her backyard rock garden. In 2002, grassroots artist Mri Pillar transformed the interior of the house into the “Garden of Isis,” which features wacky art from recycled materials. The “ReBarb” collection showcases Barbie dolls in out-of-this world attire.

Mark Moorhead, Curator of Education at the Hall of Flame, explains the horse-drawn fire engines.

The Hall of Flame, opened in 1961, is the world’s largest firefighting museum, containing fire apparatus from the United States, Europe and Japan. Collections are displayed in six galleries covering 35,000 square feet. The first gallery we entered contained horse- and hand-drawn fire engines and wagons from 1725 to 1908. Other galleries contain motorized apparatus dating from 1897 to 1969. The Wildland Firefighting Gallery is dedicated to the hotshots, smoke jumpers and other firefighters who make up the majority of America’s wild land firefighting corps. The National Firefighting Hall of Heroes is a tribute to American firefighters who were killed in the line of duty, including a memorial for the firefighters and police whose lives were lost in the collapse of the Twin Towers on Sept. 11, 2001.

All equipment has been restored to its original appearance, most of it by Don Hale. Hale, 91, got his start when he was 11 by helping his grandfather. Hale’s friend, George Batsche, 80, has assisted Hale on many restorations, calling himself “the oldest apprentice in the world.”

Magic Town has a colorful cast of characters in gritty urban settings of yesteryear.

Michael Garman is a sculptor of extraordinary American heroes and everyday people. His small sculptures, available hand painted or in a bronze-tone patina, include firemen, police officers, soldiers, cowboys and nurses, just to name a few. He casts the sculptures using a clay-wax technique.

While it’s interesting to browse the museum and gallery, a tour of Magic Town is a one-of-a-kind experience. The 3,000-square-foot sculptural theater contains a 1/6-scale miniaturized city neighborhood, complete with 18 different buildings. The colorful cast of characters in gritty urban settings of yesteryear are reminiscent of Garman’s early years as a vagabond. The scenes in Magic Town’s bars, restaurants and back alleys change right before your eyes. Holograms of its residents talk about their lives, giving Magic Town a unique smoke-and-mirrors charm. The best way for visitors to appreciate the intricate details is to participate in the scavenger hunt included with the price of admission. 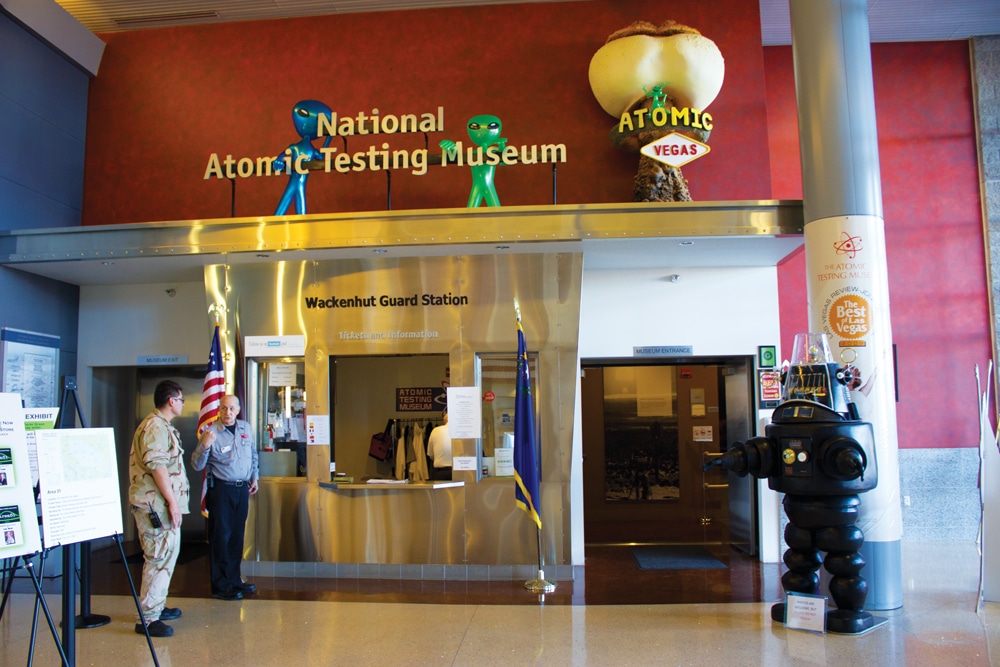 The National Atomic Testing Museum showcases a comprehensive collection of nuclear history. It has a wide variety of materials and artifacts relating to the development of the atomic bomb, atmospheric and underground testing, the Nevada Test Site, the Cold War and radiological technology.

Its newest exhibit is called “Area 51: Myth or Reality.” Area 51, a U.S. Air Force installation 83 miles north of Las Vegas, has been called the most secret place in America. Secrets were revealed in March 2012 when this exhibit opened its doors. It explores the myths, presents existing evidence, and lets you decide. To enter this secret exhibit (no cameras are allowed) visitors are given a badge. Mine identified me as an ET named Plum – a 3-foot-10-inch, 50-pound, bald, purple farmer from the planet Epsilon Eridani b.

The National Quilt Museum is the largest in the world devoted to quilts and fiber arts.

This is not your grandma’s quilt museum. While the National Quilt Museum’s extensive collection does include some traditional quilts that could have been the envy of any old-fashioned quilting bee, the art quilts and miniature quilts gave me a new appreciation for the craft. The museum, established in 1991, is the largest in the world devoted to quilts and fiber arts. The 27,000-square-foot facility has three galleries. Exhibits are rotated 10 to 12 times per year. The primary gallery features 50 to 60 quilts at any time from its diverse collection of more than 320 works of art. The other two galleries house touring exhibits. With its constantly changing exhibits, one visit is not enough. 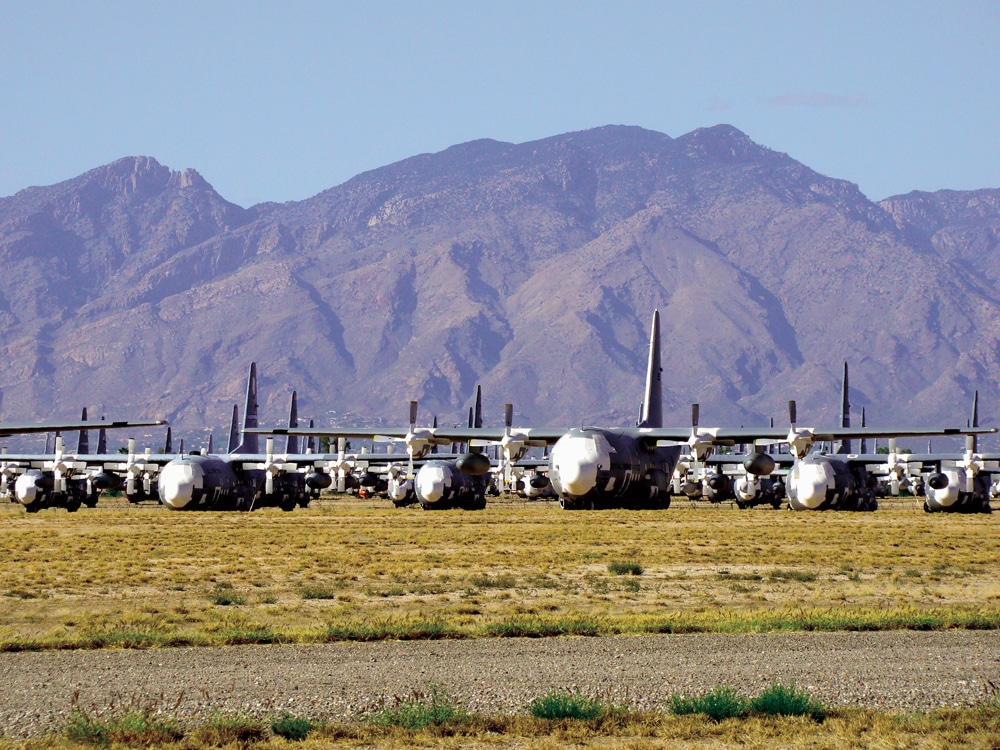 More than 4,400 aircraft are stored on 2,600 acres at the Pima Air and Space Museum’s Boneyard.

The Pima Air & Space Museum has something to interest everyone, from professional pilots to children with flying aspirations. It is one of the largest aviation museums in the world, with more than 300 planes in its collection. Aviation buffs will appreciate the SR-71 Blackbird with a top speed of 2,500 mph, or Mach 3.5 – more than three times the speed of sound; the only existing Martin PBM-5A Mariner, a patrol bomber flying boat from World War II; and the North American F-107A, a tactical-fighter bomber prototype from a U.S. Air Force design competition in the 1950s. The kids in our group were fascinated by the world’s smallest, the Starr Bumble Bee with a 6½-foot wingspan.

One of the highlights of our visit was a bus tour of the 309th Aerospace Maintenance and Regeneration Group (AMARG), also known as the Boneyard. More than 4,400 aircraft are stored on 2,600 acres. Aircraft may be kept intact for future military needs or picked apart and used for spare parts. Excess aircraft are sold commercially, whole or in parts.
Pima Air & Space Museum | 520-574-0462 | www.pimaair.org

The 1850 Gypsy Wagon on display at Pioneer Village, was the “first trailer-house.”

Pioneer Village, 12 miles south of Interstate 80 in south-central Nebraska, is a complex comprised of 28 buildings on 20 acres. Twelve historic buildings, including a church, general store and doctor’s office, surround a circular Village Green. While the Village Green is quite picturesque, we spent most of our time browsing the large buildings that house more than 50,000 pieces of Americana dating back to the early- and mid-1800s. Exhibits feature multiple modes of transportation, including more than 350 antique cars, 100 antique tractors, 17 flying machines, a few covered wagons and an 1822 ox cart.

We enjoyed seeing the forerunners of modern RVs. The 1850 Gypsy Wagon was the “first trailer-house.” Pulled by one horse, the ornately engraved and hand-carved wagon had a stove and beds. Since gypsy wagons were normally burned when the owner died, there are few left in existence today.

Wendell Turner built a motorhome on a 1939 White truck chassis. After using the vehicle in his trucking business for 11 years, he stripped it down to the frame and four wheels. People laughed when he told them he was building a “home on wheels,” but that’s exactly what he did. Between 1953 and 1975, Wendell and his wife, Edna, traveled 100,000 miles in it.

Ripley’s Believe It or Not! Odditorium, Orlando, Fla.

From the outside, the building looks like it’s slipping into a giant sinkhole. Ripley’s Believe It or Not! Odditorium is even wackier on the inside. We saw man-made oddities, such as a 14-foot-wide rendering of DaVinci’s “The Last Supper” made of colorful laundry lint, a collection of antique bed pans and a three-quarter scale model of a Rolls Royce 1908 Silver Ghost made from more than 1 million matchsticks. Other exhibits include a six-toed pig, a two-headed calf and a full-scale mannequin of Robert Wadlow, who, at 8 feet 11 inches, was the tallest man who ever lived.

In addition to the facility in Orlando, Ripley’s has 28 other attractions in North America.

Ripley’s Believe It or Not! Odditorium | 407-345-8010
www.ripleys.com/orlando/your-visit/believe-it-or-not-odditorium 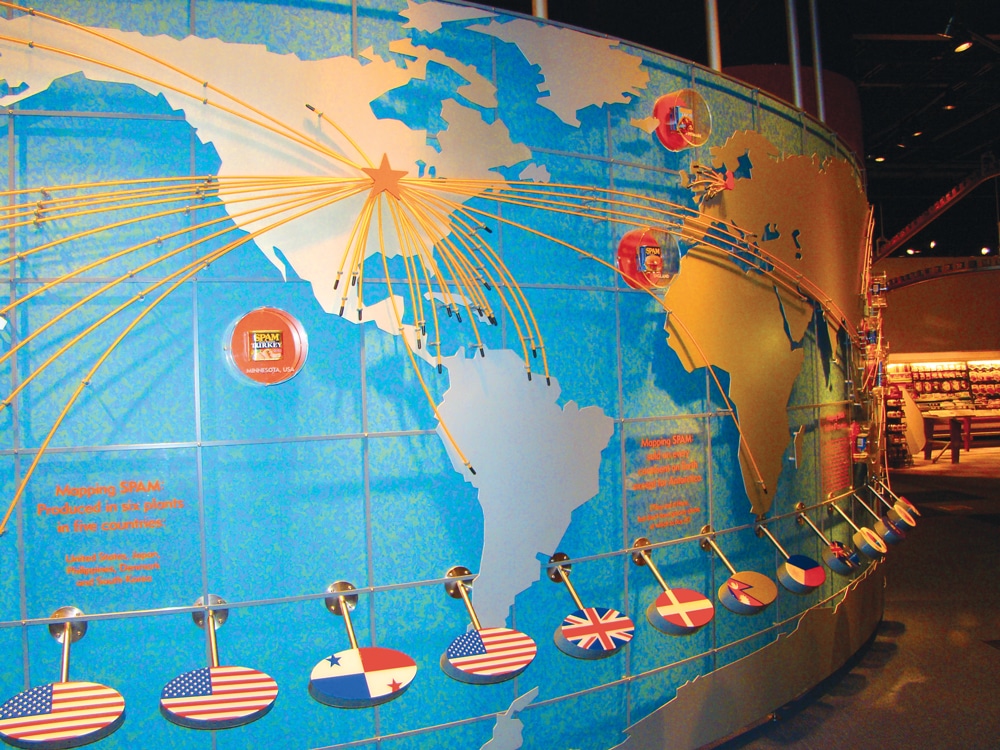 SPAM is distributed around the world.

A company doesn’t produce more than 7 billion cans of one product without creating some fans along the way. From Monty Python’s Spamalot on Broadway to the Spamettes singing their rendition of “Mr. Spam-man” and “Stand by Your SPAM” in the SPAM Museum in Austin, Minn., many are singing its praises. Even Nikita Khrushchev credited SPAM for the survival of the Russian Army during World War II. After the war, Dwight Eisenhower forgave Hormel for its only sin: “Sending us so much of it.”

Whatever your personal feelings are about the canned meat, a visit to the interactive SPAM Museum will surely put a smile on your face. I was amazed at all the wacky ways to have fun with SPAM: get cooking tips from internationally famous chefs as they prepare exotic recipes at Chez SPAM; hearing KSPAM, a fully operational radio studio airing old SPAM commercials; and competing in the Spam Exam.