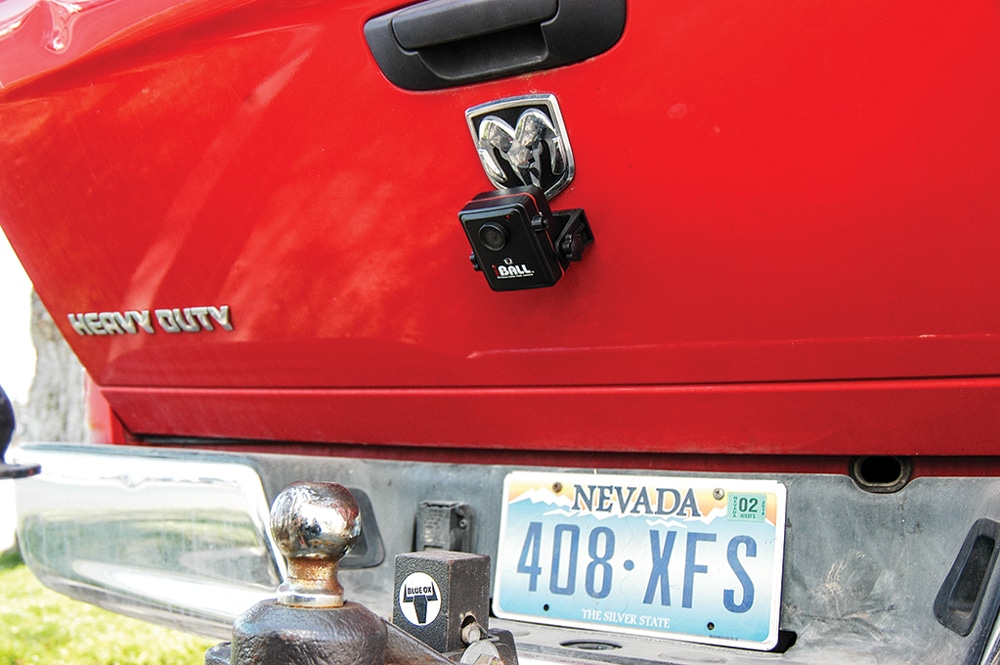 A plethora of products have been developed over the years created for the sole purpose of taking the frustration out of hitching up unassisted. Many have used alignment systems, some elaborate and some simple, but nothing has reduced the pain of lining up a ball and coupler better than a camera. Most back-up cameras are on the expensive side and require hard wiring, which is not practical for trailering. Portable cameras and monitor systems have been introduced during the last few years, but again, they can be on the pricey side — and not easy to put into temporary service.

Camera works best on tailgate of truck when hitching travel trailers, but can be mounted on any metal surface that attracts a magnet. Camera housing is protected from the elements, including water.Fortunately, wireless technology has made it easy for companies to produce inexpensive camera systems that are compact and simple to use, right out of the box. One such product is the iBall Wireless Trailer Hitch Camera. This device is specifically designed to aid the driver in hitching a trailer or fifth-wheel to a tow vehicle — and requires no special bracket for camera placement. The iBall is comprised of two major components, a wireless camera that uses a 9-volt battery and a 12-volt DC-powered monitor. At the receiving end, the video signals are displayed on a 1½-by-2-inch color screen. The monitor is attached to a flexible metal gooseneck with a cigarette lighter style plug on the other end, which provides power and supports the monitor without other brackets. The gooseneck can be adjusted for best viewing by the driver.
The camera is made of durable, weather-resistant plastic that encases the electronics and seals the components against the elements, including moisture. A small plastic bracket with a magnet attached to the bottom holds the camera snugly to any metal surface that will attract the magnet. Quick-adjusting knobs are used to get the angle just right.
To say that the iBall is easy to use would be an understatement. Setup is so simple and intuitive that the kit doesn’t even include a regular set of instructions — only a guide of what to do if it behaves strangely. Rather than permanently mount the camera, the user locates a desired spot to gain visibility of the hitch ball (such as the tail gate, bumper or the hitch itself) and adjusts the bracket for the correct angle. The monitor is plugged into the power outlet and adjusted for visibility. Both components are turned on and the system is ready for use. We found it best to “stick” the camera to the truck tailgate, which offered the best view of the ball mount and approaching coupler when hitching a travel trailer. The view in the monitor from the wide-angle camera lens can be rotated somewhat with a push of a button; picture quality is pretty decent. Just about the only thing to really be aware of is the possibility of interference that could be caused by Bluetooth technology, the keyless entry or even a low 9-volt battery.
Overall performance of the iBall was better than initially expected. The wireless transmission, using a 2.4GHz signal, is said to be good up to 100 feet, which is much more than any trailerist needs for hitching. The iBall is quick to set up, simple to use and stores in very little space. It retails for $149.95, which is much cheaper than repairing damage caused by errant hitch maneuvering — and easier on the nerves. q