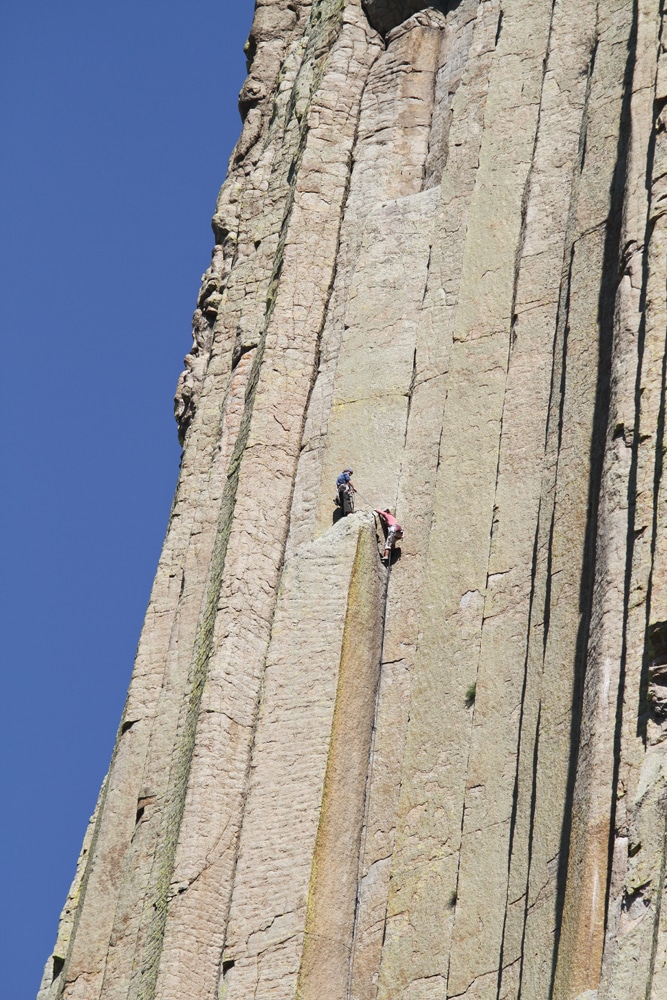 With its stunning desert landscapes, soaring Rocky Mountains and more than 75 rivers, Wyoming has long been a favorite of RVers. The Cowboy State is also home to Yellowstone, the first national park in the United States, and Devils Tower, the nation’s first national monument. We decided to take the northern east-west route to explore these two icons and everything in between.

We start in Deadwood, S.D., made famous by Calamity Jane and William “Wild Bill” Hickok. Traveling west on Interstate 90, we find the Tower, 28 miles from the interstate along a beautiful two-lane road that passes through pretty rolling hill country. We spot the beefy plug of basalt standing like a sentinel miles before we get there and stop at several turnouts to shoot photos.

Devils Tower, or MatÃ³ TÃ­pila (Bear Lodge) as the area’s Lakota Sioux knew it, rises vertically 1,267 feet above the Belle Fourche River. The rock, 867 feet high, is the core of a volcano exposed after millions of years of erosion by the river and weather. Native peoples revered this monument thousands of years before the first white men “discovered” it in 1859. President Theodore Roosevelt named it a national monument in 1906 to protect it from development.

As we drive closer, the Tower’s power and majesty become apparent.

Before long, we’re craning our necks to see the massive rock columns. Some Native American legends attribute the vertical columns to claw marks made by a giant bear that chased two young native girls up the mountain. Archaeological studies show people lived around the Tower for more than 10,000 years, and tribes like the Arapaho, Cheyenne, Crow, Kiowa, Lakota and Shoshone have all developed spiritual and cultural ties to it.

The Native American presence is apparent as we spot a sign warning not to touch prayer cloths or bundles.

Pieces of red, white, black and purple cloth wrapped into small bundles or fluttering from trees carry the prayers of Native peoples. In June, sacred ceremonies are held.

Several visitors are sitting on stone benches pointing upward and looking through binoculars. They’ve spotted climbers scuttling up the vertical stone face. Every year, 1 percent of the 400,000 visitors climb its dizzying heights. For the rest of us, the sport is watching the climbers, who appear to the naked eye as specks of color, but who you can actually watch navigate the chimney-like walls through binoculars or spotting scopes.

There are 7.5 miles of trails around the Tower and we hike up Red Bed Trail around the base to a sweeping valley overlook. Cattle now graze on what was once a rich buffalo feeding ground. We can imagine this landscape colored black by their big brawny bodies.

We pause beneath shady pines and, as I eat my tuna sandwich at the foot of this ancient monolith, I feel small. It’s easy to understand how Native Americans feel reverence for this stunning piece of Mother Nature.

We spend more time at Devils Tower than we’d planned and, while we’re tempted to stop for the night at the KOA near the monument’s entrance, we head to the western town of Buffalo. The outskirts have been overtaken by chain-style businesses, but Buffalo’s historic heart still strongly beats. Old brick buildings, including the impressive, turn-of-the-century Occidental Hotel, once the finest in the West, line Main Street.

The Occidental Hotel is the reason we’ve come to Buffalo. Step through its wooden front door and into the lobby with its soaring tin ceiling, and you step back into history. This isn’t some slicked up, Hollywood version of the Old West; this is the real thing with original wood plank floors, bullet holes and even notches made by cowboys’ spurs as they walked down the stairway to visit the hotel’s “working girls.” Western luminaries like Calamity Jane, Buffalo Bill Cody, Ernest Hemingway, Teddy Roosevelt and Butch Cassidy all stayed here.

Dawn Wexo, who’s been restoring this National Historic Landmark for the past 14 years, meets us. “This place was a wreck when we bought it,” says this energetic woman, proudly smiling. “Junk was piled feet high everywhere, the roof was falling in, false ceilings covered original woodwork and tin ceilings.”

Dawn considers the hotel a “living museum” and allows visitors to tour for free (donations accepted). We wander through the room where Owen Wister wrote “The Virginian,” the space where the hotel’s madam lived for 40 years, the suite where Presidents Hoover and Roosevelt stayed. One hall is crowded with artifacts – books, lamps and ladies clothing. When Dawn bought the place, “Nothing had ever been thrown out. It was like a time capsule.”

In the hotel saloon with its Tiffany back bar and deer, antelope, and buffalo heads adorning the walls, we eat tasty buffalo burgers and spend our time wondering about the conversations of Western legends like Calamity and Buffalo Bill.

Our accommodation for the night is Indian Campground, a seasonal park with 90 sites (most full hookup), 30- and 50-amp electrical service, pool, laundry, showers, and an off-leash area for dogs. It’s all nestled under giant cottonwoods that offer a cool respite.

On to Mustangs and Cody

On U.S. Highway 16W, we immediately climb into the fir and pine of the Big Horn Mountains. Along the road are archaeological signs noting the geologic formations and time periods we’re passing such as “Bighorn Dolomite, 400-500 million years ago.” As we climb higher on the Cloud Peak Skyway, threatening clouds gather and the geologic formations get older. We are literally climbing back through time.

We crest Powder River Pass (elevation 9,666 feet) and begin our descent into meadowland filled with grazing sheep. We pass into Ten Sleep Canyon with its soaring red cliffs and pause to take photos.

We are at the edge of the Big Horn Mountains and we drive through a beautiful green valley where we spot homestead cabins, their rooflines sagging like the spines of swayback horses. It’s slow going through the canyon, but we pick up speed and cruise into Worland, home of the Washakie Museum and Cultural Center. While the museum is smallish, it’s surprisingly sophisticated with exhibits on local history and the geology and paleontology of the Big Horn Basin, including mammoth bones and a nest of oviraptor eggs.

Just outside Lovell is the Pryor Mountain Wild Mustang Visitor Center with information about the heritage and importance of the area’s mustangs. In addition to books and other information, the center houses several wild mustangs collected by the Bureau of Land Management, which regulates herds on public lands. There’s a route you can drive to see the horses in the wild, but our time is short so we head onto Cody, the town William “Buffalo Bill” Cody founded.

Cody boasts the world-class Buffalo Bill Historical Center, a state-of-the-art museum with jaw-dropping exhibits on Buffalo Bill, guns (more than 3,000), Western art and more. One of the most impressive and poignant is the Plains Indian exhibit with several galleries that tell the proud and often tragic story of these Native inhabitants. We explore until we’re both suffering museum fatigue. The history center is so massive that admission tickets are good for two days.

Our home base in Cody is Ponderosa Campground and RV Park, a popular and centrally located park with all the amenities – grass, shade, shower and laundry house, full hookups, pull-through sites and back-ins, and a place to walk our dogs down by the river. In the evening, we head downtown to Buffalo Bill’s Irma Hotel to watch gunfight re-enactments and dine on luscious prime rib in the historic turn-of-the-century dining room.

The next morning, we drive a few miles to Heart Mountain Interpretive Center, a museum and memorial dedicated to the Japanese who were forcibly relocated away from the coasts during World War II to outposts like this stark, windswept camp. As many as 120,000 people, many born here as U.S. citizens, lost their homes and businesses, and lived behind barbed wire in cold, crowded barracks. It’s a grim reminder about allowing fear to limit our freedoms.

We could easily enjoy Cody for several days, but we’re bound for our final federal first, Yellowstone National Park. We tool down U.S. Highway 14/16/20 West along the Shoshone River into the spectacular Shoshone Canyon, its cliffs rising up like towering ramparts. It’s 50 miles to Yellowstone and this eastern approach is filled with iconic Western vistas – chiseled mountains, broad brown hills and sparkling water backed up by the Buffalo Bill Dam.

We motor through the Wapiti Valley, passing spire-like Chimney Rock and several tempting-looking RV parks. At elevation 7,733 feet, we get our first glimpse of massive Yellowstone Lake and the remnants of the severe fires of 1988 that swept through the park, consuming more than 793,000 acres.

Native Americans occupied the Yellowstone region for more than 11,000 years before whites explored it in the mid-1800s. It’s a caldera of a supervolcano, the largest on the continent, and it encompasses forests, valleys, canyons, mountains and lakes spanning three states. It’s one of the most diverse and intact temperate-zone ecosystems in the world. In 1872, President Ulysses S. Grant designated it a national park, the first in the nation and the first in the world.

If you haven’t visited Yellowstone National Park, you need to know the park is huge (more than 3,400 square miles) and travel is slow (15-45 mph). It’s late in the afternoon when we arrive and, because we’re visiting off-season, many of the campgrounds are closed. We head toward Grant Village, the closest campground, and snag one of the last spots under the pines. Here, along Yellowstone Lake, we find solitude and serenity.

A few miles farther, we arrive at Old Faithful, the most famous and predictable geyser, just as steam and water bubble and then gush skyward more than 100 feet to the hoots and applause of hundreds of onlookers. At Biscuit Basin, another thermal feature, we stop to shoot pictures of a giant bull bison grazing beside a lazy river where a fisherman casts his fly.

There’s much more to see. We head onto North Rim Drive and the Grand Canyon of Yellowstone. We hear the rumble of its magnificent Upper and Lower falls crashing through the canyon before we see it. As we stand at the Brink of the Lower Falls Overlook, rock pinnacles and striated rock in orange, black and ochre spread before us. This great canyon, carved from ancient lava rhyolite flows, encompasses 24 miles of mighty fury, spans 1,500-4,000 feet across and plunges a dizzying 1,200 feet deep in places. We greedily snap photos trying to capture its ethereal beauty and feel grateful that people like Presidents Grant and Roosevelt had the foresight to protect natural wonders like Wyoming’s Devils Tower and Yellowstone National Park.