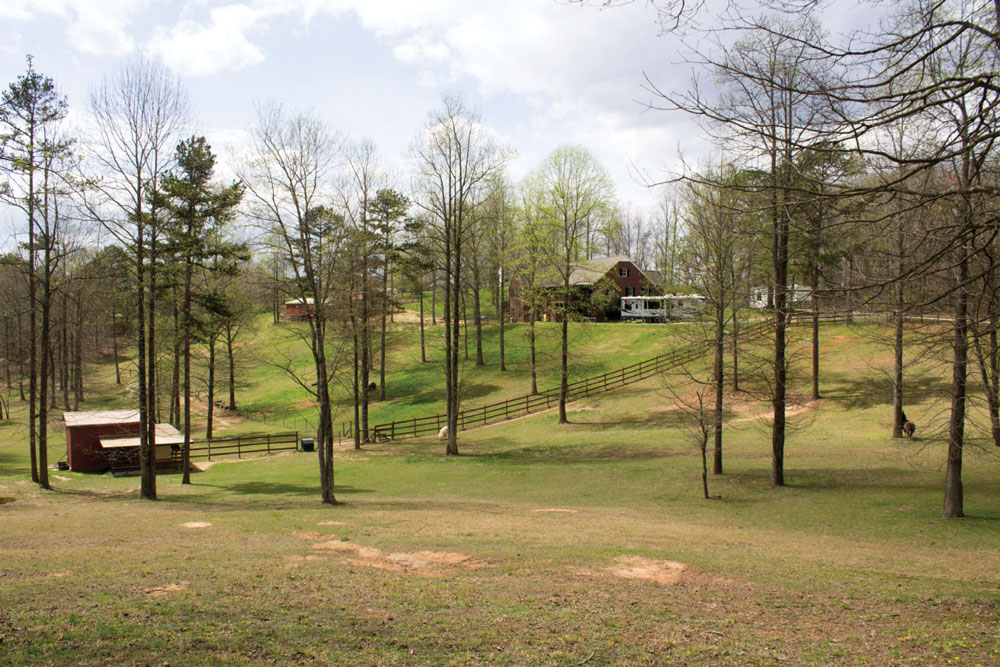 When my husband, Pete, first mentioned the job posting regarding working on a llama farm in northern Georgia for the summer, I laughed. That wasn’t part of the plan. New to the work-camping scene (also known as “Workamping,” a trademarked term coined by Workamper News), I had envisioned getting a job in a campground cleaning bathrooms or working in the office in exchange for a free campsite and, in some cases, a small wage. That’s what work campers did, right? We have been full-time RVing since June 2014, but spent some time in Michigan in the backyards of family members before heading south in January 2015.

In a strange limbo that I’m sure many work-camping couples experience, we were trying to decide where we should go, what jobs to do and how long we wanted to stay at each job. We are not retired. We are in our 30s, and sold our house and our coffee shop in Colorado to pursue this lifestyle. It was supposed to be simple and easygoing. However, with hundreds of job opportunities in every state, at all times of the year, and determining how close to towns they are in case we wanted to get additional jobs made the decision overwhelming.

My husband and I are huge animal lovers, and our dog, Lilly, is very much the center of our world. Over the years we have spent countless hours walking through livestock barns at 4-H fairs and rodeos, and have spent quite a bit of time volunteering at the local Humane Society.

The pampered pets of Windy Valley Llama Farm, along with the owners and work campers, enjoy freely roaming the property’s 7 acres in northern Georgia.

When I hadn’t stopped thinking about the llama farm after several days, I decided it was worth inquiring about. In speaking to Jerry, who owns the farm with his wife, Pam, he told me they had never had a work-camping couple who did not cry when leaving the llamas at the end of their stay.

That spoke to my heart. It was decided — spending the summer in the North Georgia Mountains taking care of 11 llamas, two herd dogs and a barn cat would be right up our alley.

We backed our 24½-foot fifth-wheel onto a level gravel pad in a site with full hookups that was large enough to accommodate an RV nearly double its size. The site was next to one of three barns on the farm and had a beautiful view of the fields. From our patio area, we could watch the llamas graze and sometimes run around acting like fools. Watching a llama run has a way of putting a smile on your face, no matter what your mood.

It did not take us long to settle into a routine and learn our duties on the farm. What started out as a three-llama pet farm to entertain Pam in her retirement years grew to as many as 37 llamas, many of them rescues. With so many animals, it became necessary to have some help on the farm, and work campers seemed like the best solution. Llamas can be wary around new people, and having long-term work campers who stayed for six months at a stretch worked well. Pam also began breeding llamas, and each spring several cria (baby llamas) were added to the family and had to be trained. When we arrived on the farm, there were no cria, and the herd had shrunk to 11, but we still had plenty to do.

Five days a week, we haltered and fed the llamas (nine females and two males), fed the dogs, cleaned the barns and fields, put out fresh hay and water, and worked to better socialize the younger animals. Star, the youngest llama at two years old, needed to have her face and feet touched daily to accustom her to that interaction. Llamas, in general, do not like to be touched, but for regular care reasons, including trimming nails and checking the health of the animals, it is something that needs to be done on a routine basis. After some struggle and a bit of spit, Star usually complied.

There is a very special place in my heart for Sassy. She definitely lived up to her name, as she was typically the most difficult to halter for the morning feeding. However, once that lead was on, she turned into a big ham. I loved the feel of her warm breath on my cheek and in my ear as she sniffed around my face. This was her version of an affectionate nuzzle, and she was the first to warm up to me and make me feel welcome. At one point I thought I had developed the same relationship with Smudge, one of the males. I was gravely mistaken. Fortunately, the majority of his spit went in my hair and not on my face. That’s always the thing people want to know when I tell them about the farm. Their first question is, “Don’t llamas spit?” or “Have you been spit on?” Yes, they do, and yes, I have. 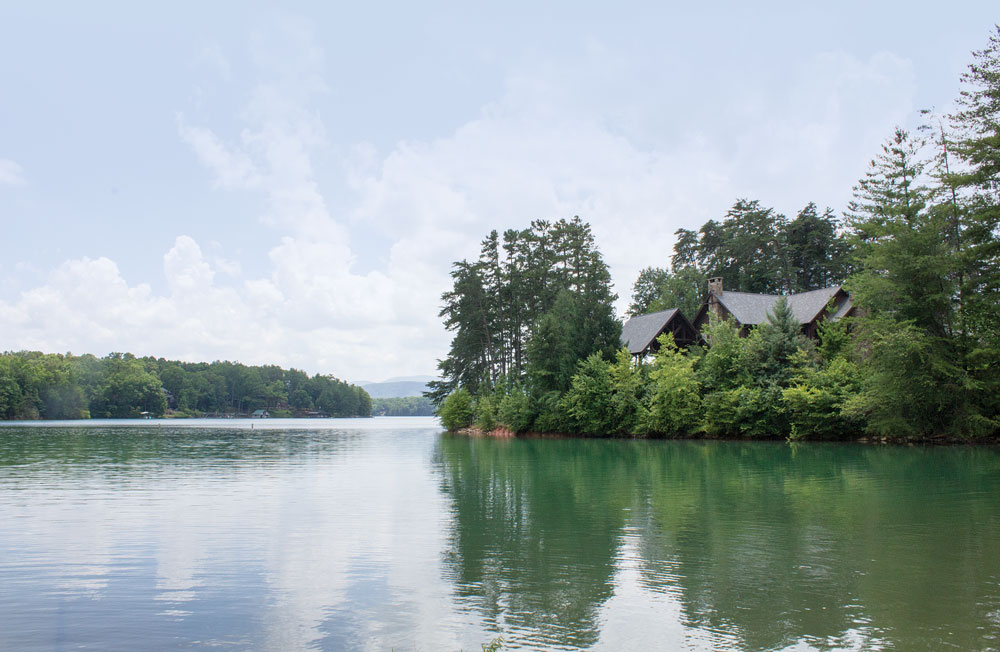 Lake Blue Ridge, as viewed from a public boat-launch site.

We loved the simplicity of the farm. Taking care of animals was a beautiful existence that we thought could get no better. Then came Tucker, a clumsy white fur ball with boundless energy and a brave sense of adventure. Watching a nine-week-old Great Pyrenees run alongside and bark playfully at llamas 10 times his size was the joy of most of our days. He was six months old by the time we left the farm, and it was fascinating to witness the actual training of a farm dog. We were excited to have been a big part of it.

Each evening of our five-day work week, we spent about half an hour in the barns. We fed one llama, which was underweight and needed to pack on a few more pounds. We fed the dogs again, making sure they had fresh water, and cleaned up the barns. During the heat of the summer, the llamas spent a great deal of time lying on the cool cement in the barns in front of industrial fans. As you can imagine, farm animals are quite capable of trashing a barn within a few hours, so most of the night work was cleaning. Our “jobs,” which totaled around 20 hours a week each, were in exchange for a full-hookup campsite that included Wi-Fi and laundry. To pay our bills, I worked at a restaurant in town, and Pete picked up the occasional odd job.

The relatively small commitment to the farm and flexible work hours allowed us plenty of time to relax under our awning and dive into the local culture. We spent many hours sitting on our patio overlooking the fields and enjoying the llamas. Most nights we lit a fire in our barbecue pit and watched hundreds of fireflies twinkle over the pastures. Some nights we watched the sunset over Lake Blue Ridge.

Lake Blue Ridge is one of many lakes in the area that offer water-based activities. We heard that the fishing was great, but we spent our time boating and swimming. Morganton Point Recreation Area has a beautiful sandy beach that kept us entertained. We rented several of the colorful sit-on-top kayaks for cruises along the shoreline. Spending hours enjoying the warm water, the hum of outboard motors and the gray-blue mountaintops across the calm reservoir was the perfect way to spend a hot summer day. 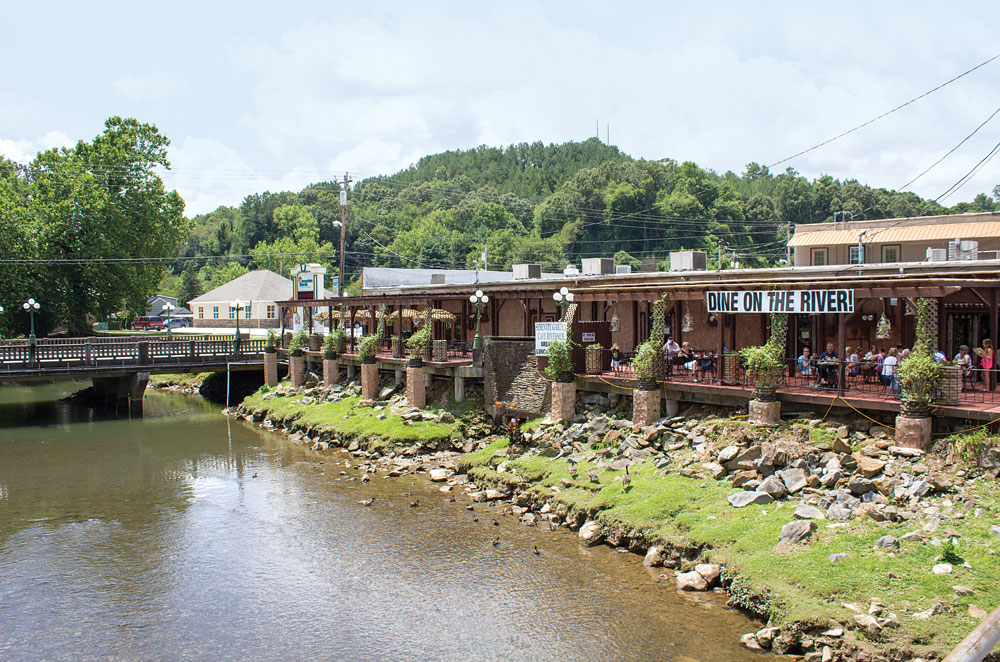 In the old mining town of McCaysville, riverside cafés are a relaxing place to dine and enjoy
a view of the Toccoa River. The Georgia-Tennessee border runs through the center of town.

The inviting mountain town of Blue Ridge was only a 10-minute drive from the farm. The charm of a train parked adjacent to Main Street with a line of historic buildings in the background gave it a postcard-perfect appeal. The train, not merely ornamental, is a fully functioning electric railway that leaves downtown for daily trips to nearby McCaysville. “All aboard!” for the 11 a.m. Blue Ridge Scenic Railway departure, and we were off in an open-air car to see the sights.

There were climate-controlled cars, but we preferred the feel of the wind in our hair and the cool breeze from the river. The scenic tour of the rolling hills and serene Toccoa River was accompanied by a narration of local history and Native American cultural influences. We were also treated to a front-row seat for the numerous watersports that take place on the river. Tubers and kayakers weaving among the fly-fisherman pro­- vided the perfect summer backdrop to the history lesson taking place.

Exploring the old mining town of McCaysville, we enjoyed straddling the Georgia-Tennessee state line, which runs on a diagonal through the center of town. The iron bridge behind Main Street is a sight to be seen. Built in 1911, it ended the need for a ferry. The dividing line where the Toccoa River becomes the Ocoee River, the bridge creates a nostalgic backdrop to the historic downtown. We had lunch at a peaceful riverside café and enjoyed the view of the flowing river. Technically on the Toccoa side of the bridge, this little café was a favorite of the train patrons and locals alike — as well as dozens of ducks that were lined up on the shore waiting for handouts.

On another day, we headed to Amicalola Falls State Park. The falls, at 729 feet, are the tallest in Georgia, and the park, with its beautiful scenery and well-maintained hiking trails, made for a marvelous day trip. We tested our stamina by hiking up the trail that runs adjacent the falls. The trail covers a little more than a mile, but that includes 600 stairs. Feeling the cool spray from the waterfall and witnessing the power of nature as the water shot over the falls made up for the reminder that the next day we’d be paying for abusing the muscles we tend not to use too often. There is also the option to drive to the top, which allows a few photo opportunities along the way.

The park boasts many hiking trails, including an 8-mile hike to Springer Mountain, the start of the famed Appalachian Trail. The trail covers about 2,200 miles and extends all the way to Maine. Since that was a bit beyond our ability level, we called it a day and headed back to Blue Ridge and our home on wheels.

Northern Georgia had not been on our radar as a place to visit. However, we discovered a beautiful, untapped area full of things to do and see. Since we aren’t the settling-down types, we have since moved on to several other jobs that have included working at the Houston Livestock Show and Rodeo, the Final Four basketball championships and a campground in northern Michigan. As rewarding as all of these experiences have been, we still miss the llamas and even shed some tears when we had to say goodbye to them. 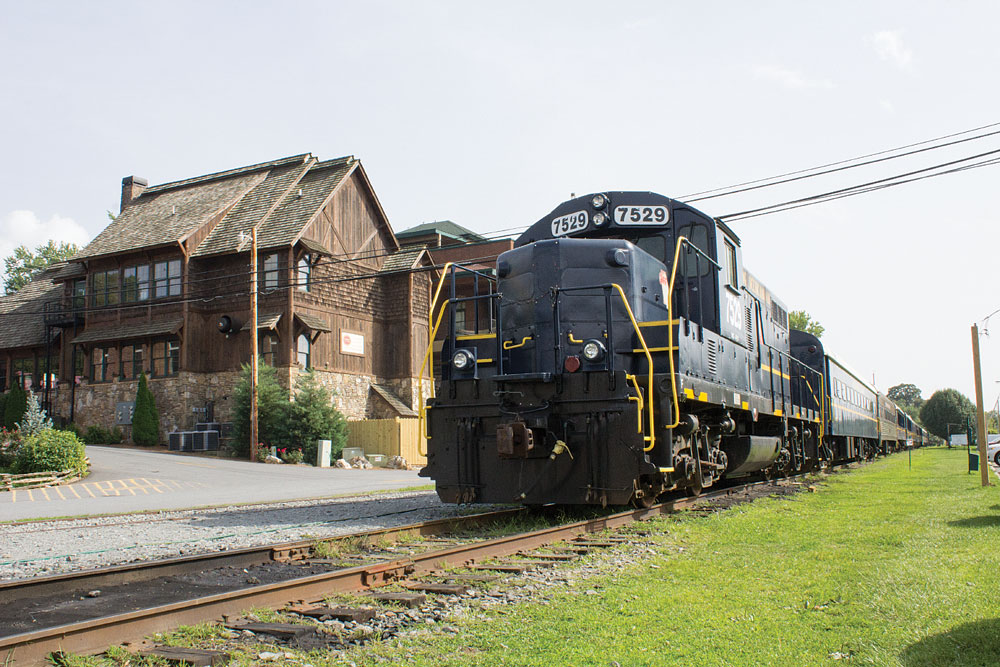 Hop aboard the scenic railway for a four-
hour, 26-mile ride alongside the Toccoa River in the charming town of Blue Ridge, tucked into the Chattahoochee National Forest.