So extraordinary was a series of rapids on the otherwise placid Wisconsin River that early French explorers dubbed them the “dells,” the English version of the French word dalles, which essentially means narrows. The Dells of the Wisconsin River, also known as the

Wisconsin Dells, occur on a 5-mile stretch in south-central Wisconsin. Here the robust river accelerates through a gorge lined with colorful sandstone cliffs, some rising to a height of more than 100 feet above the river.
By the mid-1800s, the Wisconsin Dells had become a major tourist attraction with a budding national reputation. Boat tours, offered from guide-powered rowboats, began as early as 1856. Steamboat excursions started in 1873, and in 1931 the town of Kilbourn City, in which most of the tourism was centered, changed its name to Wisconsin Dells to further capitalize on the tourist trade. 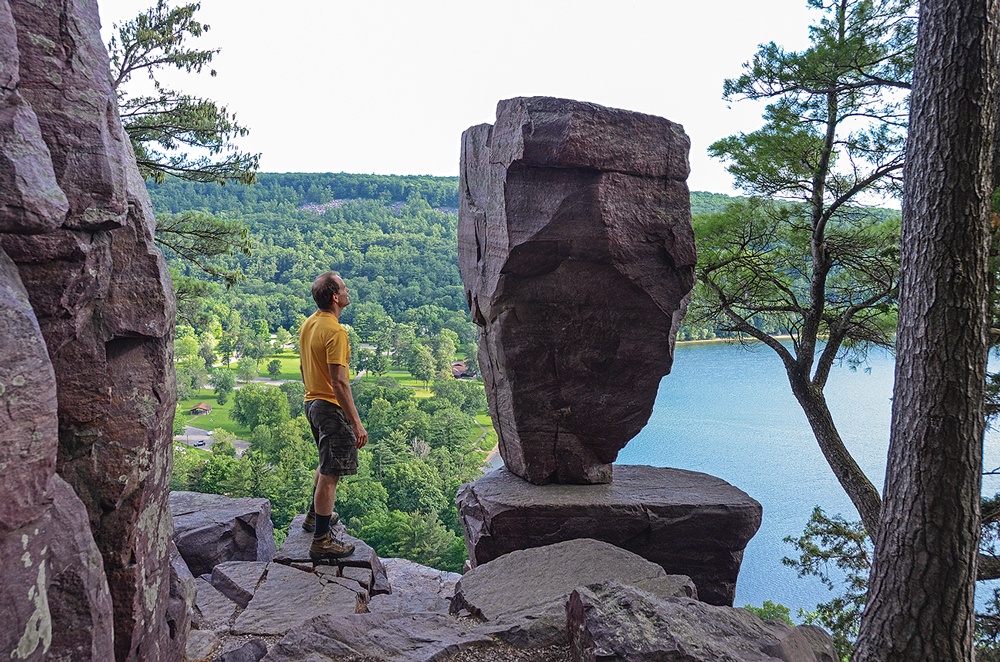 A question confronts every viewer of the famous Balanced Rock: How did it get there?

Manmade attractions, one in the form of a cabin called the Wonder Spot where optical illusions gave the appearance of water running uphill and chairs balancing on two legs, further bolstered tourism in the 1950s. The Tommy Bartlett Show, an entertainment program based on trick waterskiing, came to nearby Lake Delton in 1952. The last decade of the 1900s saw a boom in attractions built in the Dells, to the point that the area is probably now more well known for its world-class indoor and outdoor waterparks, carnival-like amusement centers and other shows.
However, the Wisconsin Dells still sit smack-dab in the center of some of the finest outdoor recreation and natural attractions in the state. On a recent visit to the area, Lisa and I set out to explore more natural entertainment, after spending a wet and wild morning enjoying Noah’s Ark, the largest waterpark in the United States.
Our first stop was the International Crane Foundation (ICF) near Baraboo, just 9 miles from Wisconsin Dells. We motored down a back road, passing a rolling rural landscape of farms and woodlands. An inconspicuous sign announced the entrance to the ICF, a conservation organization with an anything-but-inconspicuous impact on the global preservation of one of the earth’s most magnificent families of birds: cranes.

Too late to catch one of the guided tours, we browsed the exhibits at the visitor center, then hit the trails leading to expansive enclosures housing every one of the world’s 15 species of cranes. The ICF is the only facility on the planet holding such a distinction, allowing bird lovers a rare opportunity to view all the world’s cranes in a single visit. Not far from the visitor center, we spied a lovely black-crowned crane, native to Africa, poking about in its verdant abode of grass. Moments later, I found myself eye to eye with a curious sarus crane, a bird native to India that sometimes stands up to 6 feet tall.
Our next stop was the whooping crane exhibit. The rarest crane in the world, whoopers are an American bird whose numbers plummeted to around two dozen in the mid-20th century. Extensive efforts to bolster the population of these magnificent cranes have been fraught with some success and many setbacks. The ICF has been highly instrumental in conservation efforts for whoopers in several locations in the United States.  In a re-created natural wetland, we watched a pair of the elegant white birds poke about in the reeds. Although the cranes were captive, it was still exhilarating to view such a rare American species that few people have seen in the wild, if at all.

The second day of our two-day visit to the Dells began with a daybreak departure from the family-favored Yogi Bear’s Jellystone Park Camp-Resort. Five minutes later we arrived at the boat launch at Mirror Lake State Park, where the Wisconsin Dells Visitor and Convention Bureau had graciously arranged a before-hours rental of two kayaks. With an ephemeral mist rising from the glassy surface of the lake, we launched our crafts, as the cheery chorus of an American robin greeted the day. 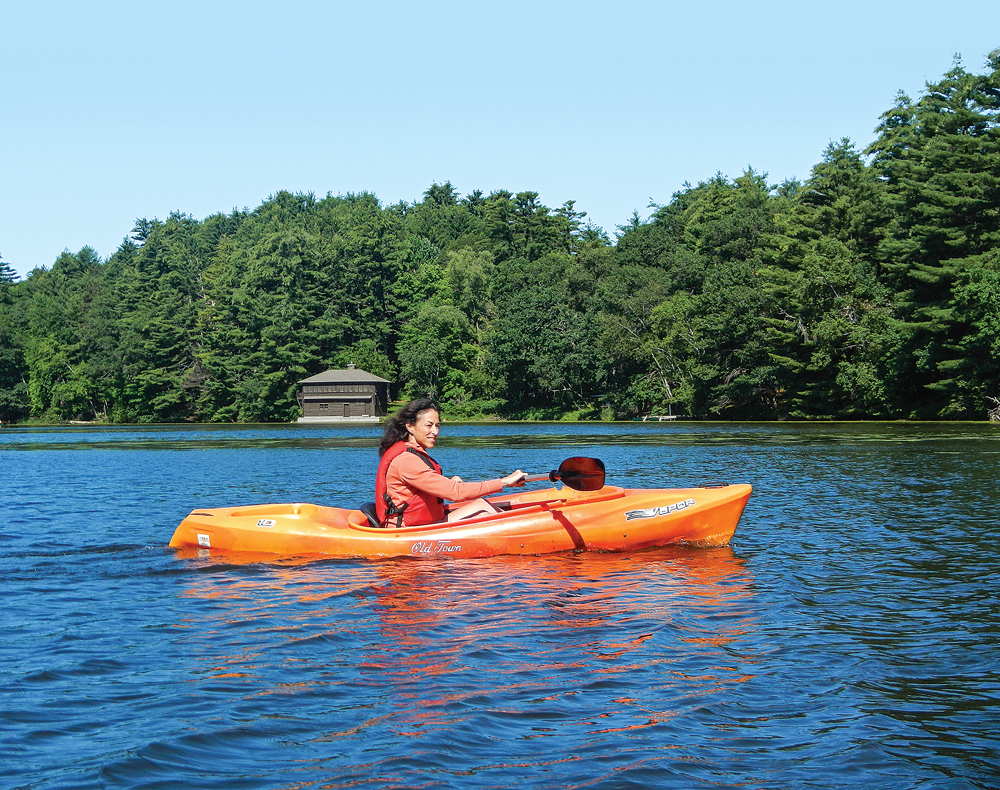 Kayaking on Mirror Lake is the ideal way to enjoy the water and wildlife.

Our paddling route veered north from the launch, past an outpost of sheer rock outcroppings dropping directly into the lake. Gnarled trees clung to the vertiginous stone, their knobby roots sometimes exposed above the unrelenting stone where indiscernible crevices gave them purchase on the cliffs and transported nutrition to emerald canopies above the roots. Around a bend, our excursion met another party of lake travelers headed in the opposite direction — a pair of Canada geese with some half-dozen half-grown goslings in tow. On a collision course, the geese warily veered shoreward to watch our passing from behind a partially submerged log.
Rhythmic strokes propelled the kayaks farther up the lake, where we encountered a pair of fishing boats. Excited chatter issued from one of the crafts, evidence, I presumed, of a successful outing. About the time I began to sweat, Lisa called for a reprieve from the paddling.
Back at the launch, I looked reluctantly across the narrow lake at a bay disappearing on the far shoreline. On a similar trip some years previously, my youngest son and I viewed and photographed a host of birds in the shallows at the rear of the cove, including sandhill cranes, blue herons, osprey and an assortment of other waterfowl. But the day’s ambitious itinerary beckoned in a different direction, this time to sandy soils near the Wisconsin River.

Visitors to the International Crane Foundation can lock eyes with endangered whooping cranes.

In 1935, Aldo Leopold, one of the greatest ecologists in American history, purchased a tired farm and tumbledown buildings along the Wisconsin River near Baraboo. There, Leopold and his family planted trees, worked to restore native grasses and other plants, and observed a regeneration of the natural world. Leopold died of a heart attack on the property in 1948 while fighting a grass fire on a neighbor’s property. Shortly after his death, a collection of his essays was published under the title A Sand County Almanac. It has since sold more than 2 million copies and is considered an American classic in literature of the natural world.

A black-crowned crane, native to Africa, pokes about in a natural enclosure.

Completed in 2007, the Leopold Center is located on Aldo Leopold’s farm. The center was constructed from pines planted by Leopold in the 1930s and 1940s. It produces all its own energy, primarily from solar panels. Inside, visitors are intrigued by a fascinating look into the life and teachings of Leopold, primarily via vintage photos, artifacts from the farm and excerpts from his writings. The center also has a garden of native wild plants and flowers, many of which Leopold described or were referred to in his essays.
Having read A Sand County Almanac, I was most curious to view the Shack, a former chicken coop on the old farm that Leopold converted to his family’s residence while they tended the land. We found the weathered little building nestled among a stand of stately pines, trees planted by the hand of Leopold himself. After viewing the Shack, we wandered down a short trail to the banks of the Wisconsin River. Seemingly on cue, a bald eagle came soaring up the river on the midday air currents. Back at the center, we admired and photographed several native wildflowers, including a compass plant, a prairie wildflower whose mature leaves point on a north-south axis.
Leaving the Leopold Center, we made a quick drive (12 miles) to Devil’s Lake State Park, a 9,000-acre playground with a crystalline lake as its centerpiece. The lake itself is something of a geological wonder. During an ice age, the region was covered by the Wisconsin Glacier, which gouged and reshaped the landscape. One trough it created occurred at Devil’s Lake, where deposits of earth and stone left by the glacier form two natural plugs in a valley. Underground springs spout between them, providing water for the 50-foot-deep Devil’s Lake.

Near Baraboo, the Leopold Center provides a relaxing look at the life and work of conservationist Aldo Leopold, along with a glimpse of native plants and nature-friendly buildings.

The park’s 29 miles of hiking trails top our list of activities. Nearly 14 miles of the paths comprise part of the Ice Age Trail, one of only 11 National Scenic Trails in the United States. The entire span of the more-than-1,000-mile Ice Age Trail is found in Wisconsin.
For our hike, we chose the short but strenuous climb to Balanced Rock, an inverted pyramid of quartzite. The stone is massive but appears it could topple at any moment from its perch on a flat ledge overlooking a cliff face. After admiring this geological oddity, we ascended further up the trail, until we scaled the East Bluff overlooking the lake. The scene begs for a photo. By the time we stowed the camera, we’d composed several dozen images.
We hiked for some distance on the East Bluff Trail, to which the Balanced Rock Trail connects, discovering additional views of the lake and relishing our footsteps on the Ice Age Trail, of which the East Bluff Trail is a portion. Then it was time to descend the path back to the parking area and turn our headlights toward our home in Montana.
The route brought us once again through Wisconsin Dells, bustling with couples and families enjoying its many manmade amusements.

On a return trip, we’ll doubtlessly play in a waterpark. But with so many outdoor attractions within minutes of the Dells, we’ll spend just as much time savoring its natural side as well.