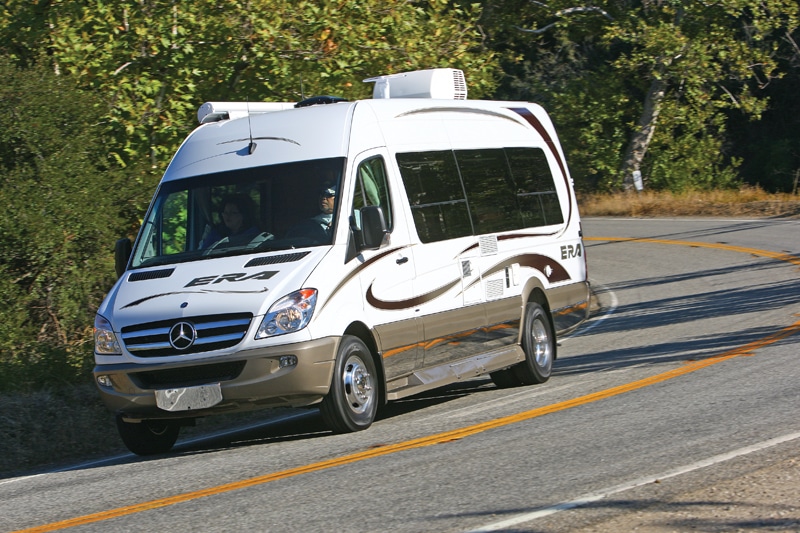 We didn’t know it at the time, but the new millennium would bring with it the biggest change the motor­home industry had seen in decades. As we rolled along contentedly in our Dodge, Ford or Chevy-based Class B’s and C’s, a new platform was preparing to make its debut on our shores. It was small, maneuverable and rugged, and perhaps best of all, diesel-powered. America was about to become acquainted with the Sprinter.

Looking back, the timing couldn’t have been more perfect. The van platforms offered by the Big Three were aging, and their gasoline engines offered single-digit fuel economy figures at a time when developing countries were driving fuel costs ever higher. Daimler had taken control of Chrysler, and a few years earlier had introduced the Sprinter in Europe to replace the Mercedes-Benz T1 van. When the Sprinter officially launched in the U.S. under the Freightliner and Dodge brands in 2001, the handwriting was already on the wall: DaimlerChrysler didn’t need two vans, and after the 2003 model year, the Dodge Ram van would become part of history.

Naturally, many of us were saddened to see another American vehicle, particularly one that millions of families had grown up in, permanently discontinued. But it wasn’t long before the Sprinter found its own place in our hearts – and in the hands of coachbuilders who almost immediately saw the platform’s potential. The first Sprinters were Class B conversions, but in 2004 DaimlerChrysler introduced the cab chassis. Soon after, Class C’s were popping up everywhere.

That’s the way it remained until almost two years ago, when Winnebago  pushed the Sprinter envelope yet again with the first Sprinter-based Class A motorhomes in the industry: the Winnebago Via and the Itasca Reyo. It was official, the Sprinter could serve virtually every niche in the motorhome market, ranging from family runabout to luxury motorhome, and do it with unrivaled fuel economy.

With so many variations on the same theme, you may have wondered which Sprinter style best suites your needs – or how the larger, heavier versions handle and perform. That’s why we made special arrangements with Winnebago to test all three: The Itasca Reyo Class A, Winnebago ERA Class B and the Winnebago View Class C. We evaluated every aspect of drivability, livability and fuel economy. Here are our findings, going from smallest motor­home to largest.

All three of these motorhomes were built on the same chassis with the same cab, so rather than talk about the same points on each one, we have consolidated them here.

Built by Mercedes-Benz, the Sprinter is robust in construction and has an amazing turning circle. It also has very powerful anti-lock brakes, something we learned when two lanes suddenly turned into one in a construction zone, and we had to apply full braking power. The headlights create superb visibility, as do the windshield wipers, which we used briefly during a passing storm.

The biggest surprise of all, however, is the Sprinter’s Mercedes-Benz V-6 engine. Measuring just 3 liters, it produces 188 hp and 325 lb-ft of torque, which doesn’t seem like nearly enough for the larger View and Reyo. But with less than 11,000 pounds to contend with, the engine has no trouble at all hustling the coach up to speed and keeping it there. We were delighted to find that we could haul 6 percent grades at 65 mph, something most motorhomes, gas or diesel, can’t do. The engine is also very quiet, so even though it is located up front, it’s never intrusive even under full-throttle.

But this is, first and foremost, a commercial chassis and that means that the cab has a few shortcomings. Most notably there is no storage between the seats, so small items have to be stored in recesses atop the dash. This is essentially useless, as you can neither see the things you’ve put there, nor reach them while driving. A center console that mimics a small engine doghouse would be a welcome addition.

The seats, regardless of the price point, use manual adjustment – and while they’re OK for short trips, they lack bolstering and support. The seat cushion angle couldn’t be adjusted either, so I felt as though I was sliding off the end of the seat sometimes.

Last but not least, the heater and A/C controls have symbols that are small and hard to read, especially while driving. This is in direct contrast to the cruise control, which is on a separate stalk and can be easily operated without having to look at it. The shifter is also within easy reach and can be manually down/upshifted if necessary.

All things considered, the complaints with the Sprinter platform are few. It remains a magnificent, versatile platform that will likely serve the motorhome industry for many years to come.

Read about each of Winnebago’s three sprinters by clicking the images below! To find these, and more than 4,000 other RVs, check the online RV Buyer’s Guide.