Will Your Next Tow Vehicle Be Electric? 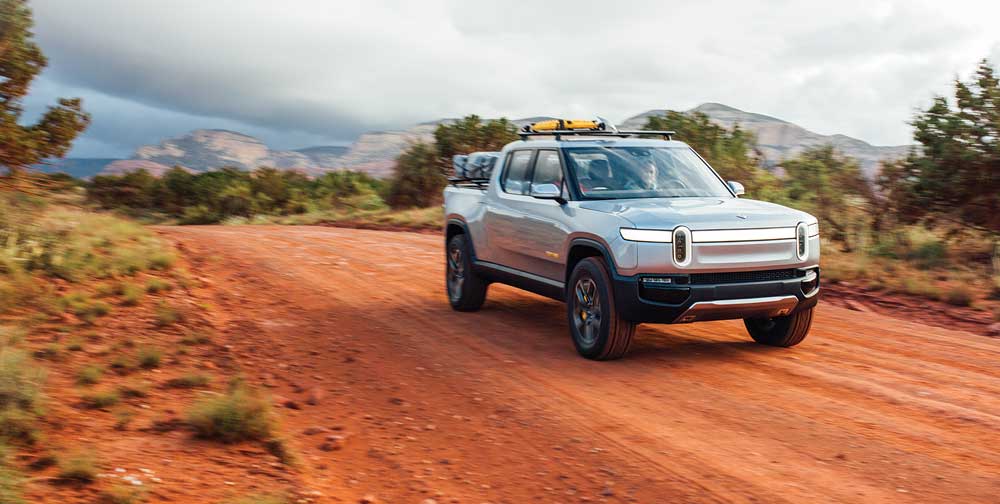 Electric and plug-in hybrid trucks and SUVs on the way from Ford, GM, Tesla and others could make surprisingly capable tow vehicles

After decades of promises, technology has matured to a point where electric vehicles (EV) and plug-in hybrid electric vehicles (PHEV) are reliable, environmentally friendly alternatives to their gasoline- and diesel-powered counterparts. Although the current EVs and PHEVs are still not the best tow vehicles, a few of them allow eco-conscious consumers to reduce greenhouse-gas emissions, save money on fuel on their daily commute, and use the same vehicle to tow a lightweight trailer.

Pure EVs are currently still limited as tow vehicles for several reasons. First, there is the matter of how much energy can be stored in today’s best batteries. The Tesla Model X Long Range has the most energy-storage capacity of any current EV — 95 kilowatt-hours of usable energy (100 kilowatt hours advertised). By comparison, the 23-gallon fuel tank in a Ford F-150 has the equivalent of about 750 kilowatt-hours of energy storage, depending on engine choice and fuel-tank capacity.

Built in a former Mitsubishi factory in Normal, Illinois, the all-electric Rivian R1T pickup is planned to launch later this year.

Only when 200- to 300-kilowatt-hour battery packs become available, which is now becoming the case, will an electric tow vehicle seriously compete with those with a gasoline or diesel engine. Even then, there would still be a weight and volume penalty. The Model X Long Range batteries weigh more than half a ton, so an EV would likely be penalized when it comes to gross combined weight rating (gcwr). The Tesla has a 4,960-pound towing capability, along with a gross vehicle weight rating (gvwr) of 6,758 pounds and a gcwr of almost 12,000 pounds. By comparison, a Ford F-150 with the same gcwr can tow up to 7,500 pounds.

Still, it is clear that the Model X was built with towing in mind. It has a “trailer mode” that activates Trailer Sway Mitigation, where automatic braking of the vehicle’s individual wheels can prevent a trailer from swaying dangerously. It also disables many of its driver-assistance features like automatic steering and parking, active cruise control and the rear parking sensors.

In general, EVs have gobs of torque for accelerating and hill climbing, since electric motors can produce maximum torque at zero rpm. You have probably seen ads with a Tesla pulling an airliner and a prototype electric Ford F-150 pulling a long string of freight cars. 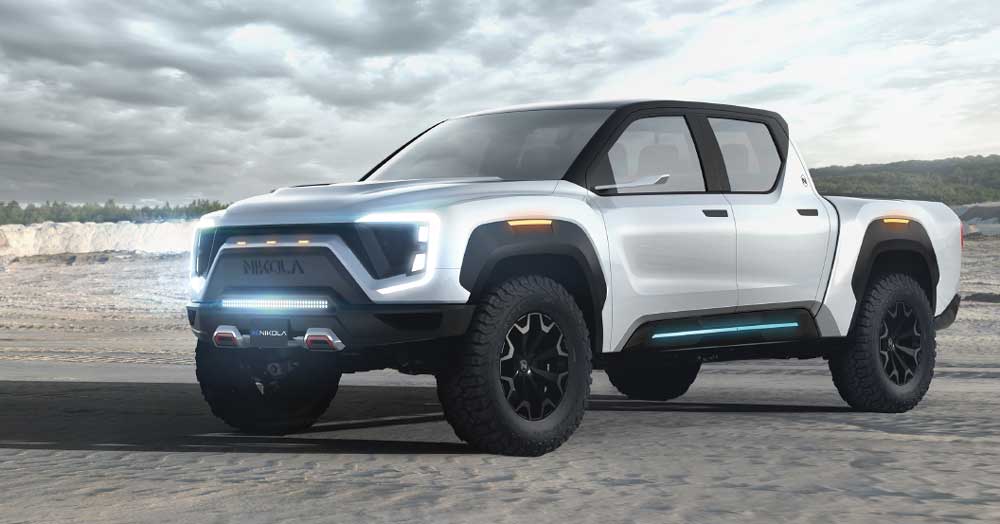 Available as an EV or a fuel-cell vehicle, the Nikola Badger is expected to have a tow rating around 8,000 pounds.

New Electric Pickups Could Do the Job

Within the next few years, there could be a half-dozen electric pickups and SUVs with towing capability rivaling gasoline pickups.

Leading the way is the Tesla Cybertruck. Tesla says the top Tri Motor AWD model will be able to tow as much as 14,000 pounds and have a range of 500 miles. A base Single Motor RWD will tow 7,500 pounds with a 250-mile range, and a Dual Motor AWD will provide 10,000 pounds and 300 miles. Granted, those ranges are for driving solo, not towing, and have not been evaluated in the real world.

Next up is the Rivian R1T, which the company says will be available by the end of this year with 105-, 135- and 180-kilowatt-hour battery packs with estimated ranges of 230, 300 and 400 miles, respectively. All versions will have the ability to tow 11,000 pounds. While Rivian is a startup, it has some serious backing. Ford has invested heavily in it, and Lincoln’s first EV will ride on Rivian’s flexible “skateboard” chassis. Amazon recently placed an order with Rivian for 100,000 electric delivery vans.

Rivian has shown a camper version of the R1T that includes a pullout kitchen. The electric double induction cooktop runs off the truck’s main drive battery. In general, the EV battery could be used for campsite power, eliminating the need for a generator.

Another startup, Bollinger Motors, plans to offer its B1 electric SUV and B2 electric pickup later in 2020. They will have gvw ratings exceeding 10,000 pounds, making them Class 3 trucks. Range of both is estimated at 200 miles from a 120-kilowatt-hour battery pack. They could tow up to 7,500 pounds. 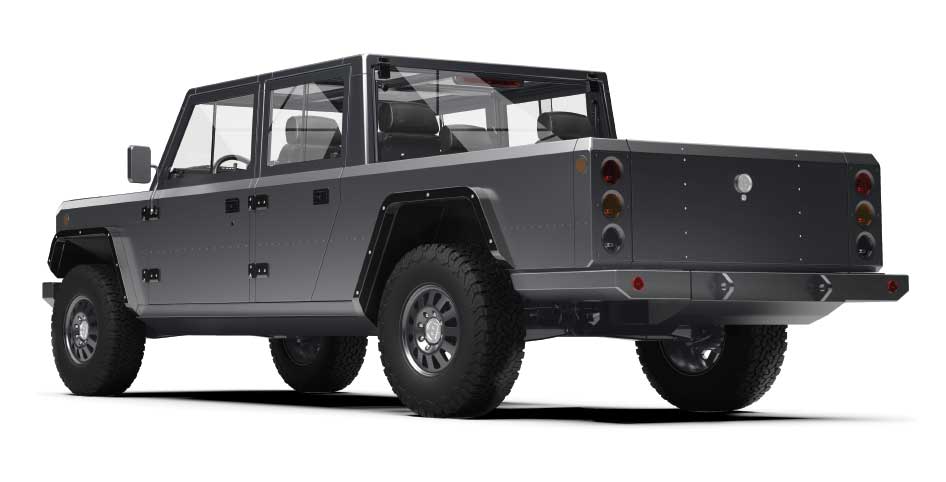 A Class 3 truck, the B2 from Bollinger Motors could tow as much as 7,500 pounds

Ford plans to offer as many as 16 pure EVs by 2022, starting with the Mustang Mach E. This four-door SUV with a range of up to 300 miles will be offered in 2020 as a 2021 model. The Mustang SUV will be followed by an electric F-150 pickup, whose capabilities are still mostly unknown.

General Motors recently announced its all-electric pickup will be called the Hummer — yes, the Hummer is back. Initial reports don’t provide range or towing capacity, but the latter should be impressive since it is reported to have 1,000 horsepower and 11,500 lb-ft of torque. The new Hummer EV will be built in GM’s Detroit-Hamtramck Assembly plant and sold through GMC dealerships. It should be available in 2021.

EV startup Lordstown Motors plans to offer its Endurance pickup in late 2020. Again, not much is known about the Endurance except that it will probably feature a four-wheel-drive “hub motor” system, have at least a 200-mile range and be capable of towing 6,000 pounds.

Nikola Motors, which has been developing fuel-cell electric vehicles (FCEV) and battery-electric semis, announced it will offer FCEV and EV Badger pickups later this year. While an FCEV pickup may not yet be a suitable RV tow vehicle because of the lack of a hydrogen-fueling infrastructure, a battery-electric Badger could be quite competitive. Nikola is planning to build hydrogen filling stations, but these will be mostly along well-traveled truck routes. Nikola is claiming a 300-mile range and around 8,000 pounds of towing capacity for the battery-electric Badger. 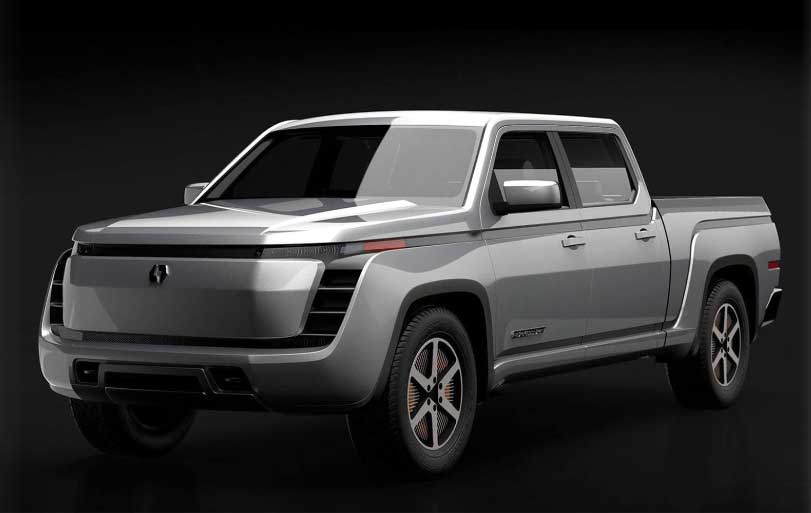 The all-wheel-drive Lordstown Endurance is expected to have a base price of $52,500 and towing capacity of 6,000 pounds.

Charging-station access is not an issue for plug-in hybrids since they operate on an internal-combustion engine when the Li-ion battery is discharged. Batteries in conventional
hybrids are charged by the engine and during braking, and they have very little or no electric-only range.

Instead of an internal-combustion engine, Rivian’s flexible “skateboard” chassis houses the battery pack and suspension system on a compact platform.

Pure electric vehicles are a different story. They can be charged with a stardard 120-volt wall outlet, but this form of charging, referred to as Level 1, is the slowest method. As of May 2019, more than 68,800 Level 2 (240-volt) and Level 3 (DC fast-charging) stations were available in the United States. Of those, about 10,860 are dedicated Level 3 stations that make long-distance travel more practical for EVs.

With a Level 2 charger, it typically takes about seven hours to recharge a battery to get 200 miles of range. This goes down to about an hour with a Level 3 fast-charger.

Chargers are not universal. While Level 2 chargers have universal charging capability so all EVs and PHEVs can use them, only certain Tesla models can use Tesla’s V3 Supercharger’s latest maximum 250-kilowatt capability, for instance.

A majority of charging stations are in California, Florida, Texas and New York, with only a few dozen in states like North and South Dakota, Wyoming and Montana. For this reason alone, a pure EV is probably not a wise choice for towing in less populated states. This undoubtedly will change as EVs become more popular. 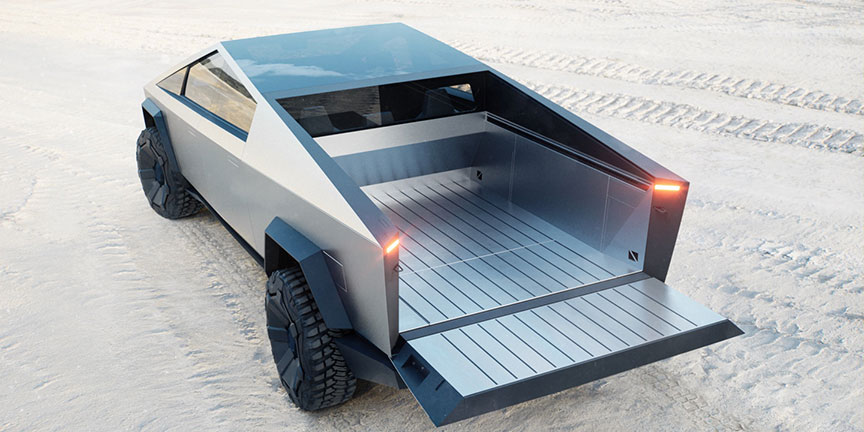 The battery-powered Tesla Cybertruck will be capable of towing up to 14,000 pounds, according to the manufacturer.

What Can Current EVs Tow?

With the exception of the Tesla Model X, only a handful of EVs can tow an RV now, albeit a pop-up or very small trailer. Tesla offers a receiver for the Tesla 3, but it is available only in Europe. In the case of the Bolt, Chevrolet does not recommend towing. 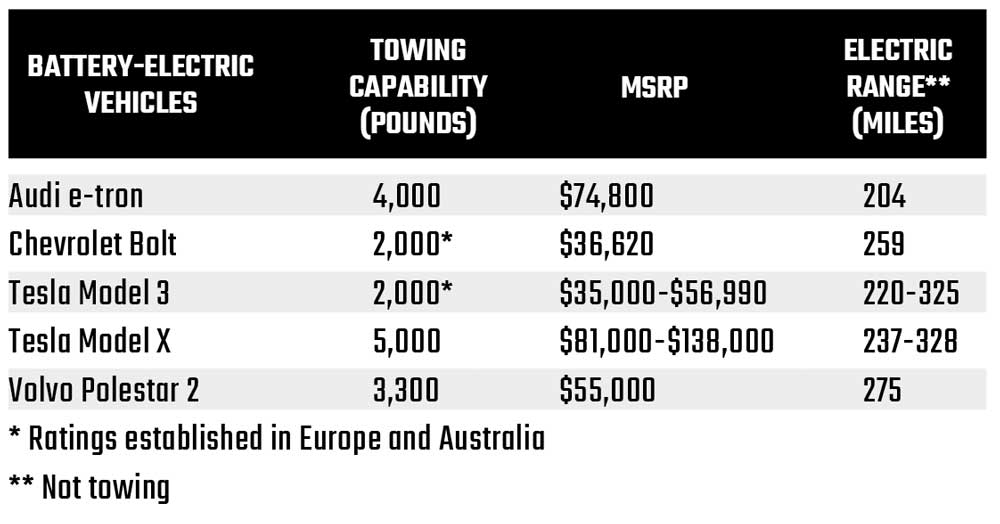 PHEVS Are a Better Choice

Right now, if you want to tow an RV or other trailer with an earth-friendly vehicle, a PHEV is your best bet. In a PHEV, the battery, which has sufficient kilowatt hours of storage to provide enough range for daily commuting, is charged in the same manner as an EV. There is also a gasoline engine that provides extended range for longer trips that can include trailer towing. 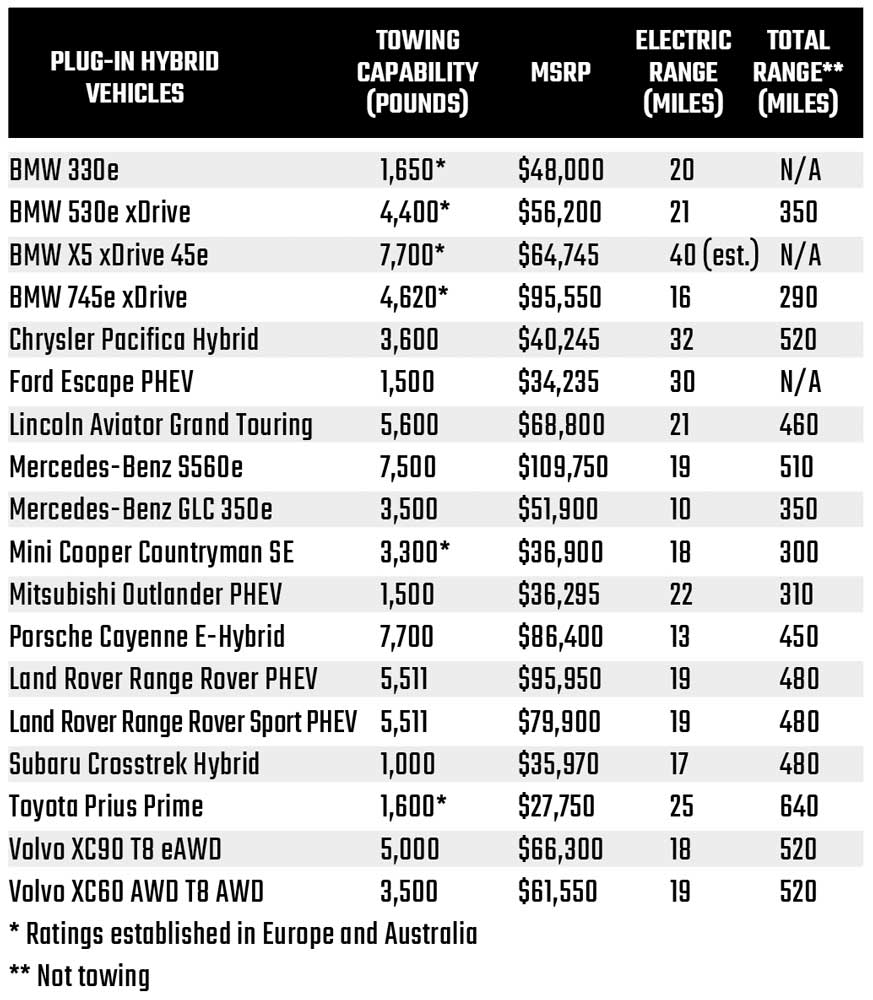 It should be noted that PHEVs will have their greatest torque when both electric motor(s) and combustion engine are working together. Automakers often use a less-powerful engine in PHEVs than in the standard, non-PHEV version of the model. Thus, once the battery is depleted, only the less-powerful gasoline engine is available for towing.

What About Conventional Hybrids?

There are many hybrids for which manufacturers have issued tow ratings. In conventional hybrids, the battery is charged only by the combustion engine and regenerative braking. Since the batteries have much smaller storage capacity, hybrids have little or no ability to operate on electric power alone. 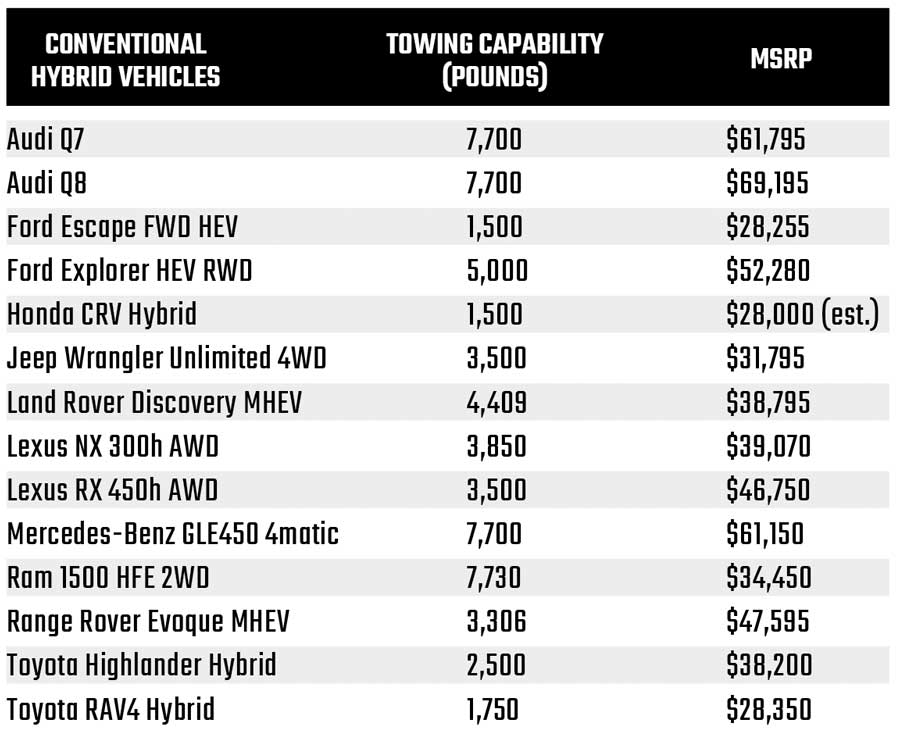 When considering any EV, PHEV or conventional hybrid as a tow vehicle, make sure the automaker approves its use for towing. Otherwise, towing might invalidate the warranty. Incidentally, many vehicles not approved for towing in North America (presumably for liability reasons) are approved in Europe, Australia and elsewhere.