Who Says You Can’t Take It With You?

These motorhomes with garages ARE designed to haul motorcycles, ATVs and a whole lot more

Not every advancement in motorhome design and functionality is easily remembered in later years – coaches have been evolving, in fits and starts, ever since Ray Frank began bolting together “housecars” in his Michigan barn in the ’50s – but the first motorhome toy hauler is more easily traced. It appeared in 1996, the year the Olympics came to Atlanta, Georgia.
Even so, when Four Winds International decided to partner with RV rental company Cruise America and build one-off toy hauler variants of its highly successful Class C motor­homes for use as support vehicles for the 1996 Olympics’ national torch relay across America, “there really weren’t a lot of expectations” that it would develop into anything bigger in terms of product development, recalled Jon Crider, now vice president of product development for northern Indiana-based Thor Motor Coach (TMC).

As it turned out, however, the newly monickered “Fun Mover” by Four Winds – later merged with Thor Industries’ sister company Damon Motor Coach to form TMC – captured a lot of interest thanks to nearly nonstop television coverage of the relay. It wasn’t Four Winds’ only foray into new product frontiers – the motorized company also tried its hand at towables in the early ’90s – but there were more than a few motorhome enthusiasts in that TV audience and the idea gained traction.
More than that, it helped carve out a small, but thriving, segment. Just don’t call them “toy haulers.”
“We refer to them as ‘everything’ motorhomes,” said Crider. “It doesn’t matter if you have toys – be they dirt bikes, motor­cycles, buggies or golf carts – a mobile office, a DJ studio, a mobile dog-grooming business … we’re seeing all these kinds of applications opening up for a motorhome with a garage.” 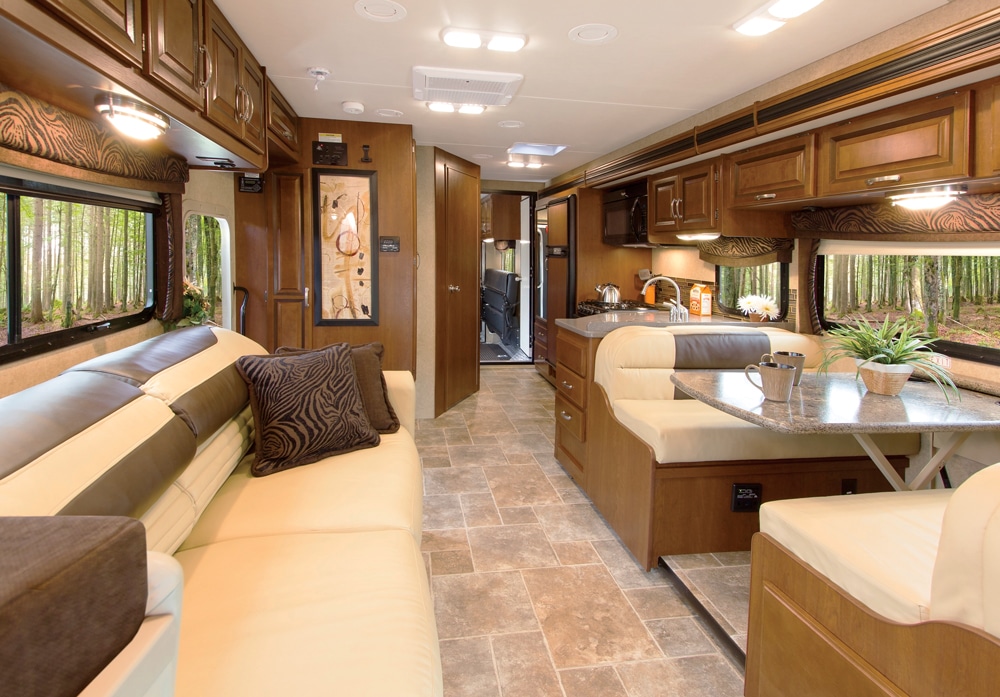 It’s that versatility, in fact, that has been fueling a surge in toy haulers throughout the RV industry.
“Some people who don’t even have toys gravitate toward a toy hauler because they like the flexibility of space,” said Don Clark, president of Middlebury, Indiana-based Grand Design RV Co. “A toy hauler gives you space that you can do whatever you want with in the garage as long as your toys are out. The other thing it adds is economical space – patio space. Now, with the advent of the patio addition with a ramp that converts into a large patio room, it brings the outside in. The versatility of a toy hauler in today’s market, if done correctly, is amazing.”
Matt Zimmerman, president of Keystone RV Co., Goshen, Indiana, concurred – to a point. “I think versatility is a big part of it,” Zimmerman agreed, “but it’s not only versatility – it’s also the level of appointments in a toy hauler today versus just a few years back. It’s a much ‘softer’ piece and isn’t as edgy in terms of interior appointments. It appeals to a wider demographic today.”
Granted, neither Clark nor Zimmerman build motorized products, but the viewpoints of the seasoned RV executives – versatility and upscale amenities – reflect the changing toy hauler landscape and are on display in contemporary motor­homes with garages.
Interestingly, while TMC’s predecessor, Four Winds, can be said to have built the first Class C motorhome toy hauler 18 years ago, it’s still the only mass-marketed Class C in the segment. The company is, in fact, the only manufacturer that, as Crider noted, has a “truly dedicated product line” of toy haulers. Marketed under the Outlaw brand, the line includes the 29H – a traditionally styled 30-foot, 9-inch Class C built on a Ford E-450 chassis powered by a 6.8-liter V-10 Triton with 305 horsepower and 420 lb-ft of torque – along with a “Super C,” a 36-foot, 9-inch model (35SG) constructed using Ford F-550 truck underpinnings, and a pair of Class A coaches.

Aside from the added length, there are some notable differences between the two Class C’s, mostly due to the F-550’s added capacity, which allows for a slightly larger garage area (10 feet by 8 feet, capable of supporting 1,500 pounds, compared to about 7 feet by 8 feet and 1,000-pound limit in the 29H), and gross vehicle 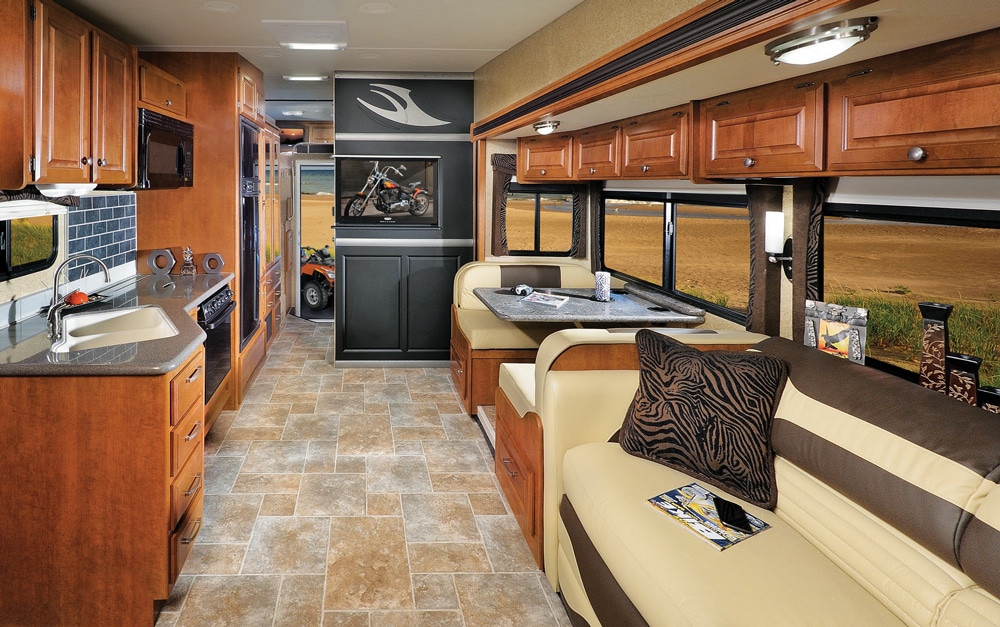 weight rating (gvwr)/gross combined weight rating (gcwr). The 29H carries the E-450’s familiar 14,500-pound gvwr, along with a 22,000-pound gcwr, while the bigger F-550, with a 6.7-liter diesel V-8 pumping out 300 horsepower and 660 lb-ft of torque, bumps those capacities up to 19,500 pounds and 35,000 pounds, respectively. There also are dramatic differences in the fuel, water, LP-gas and holding-tank capacities between the two, but you get the idea.
The Outlaw Class A also sports a cantilevered roof line out back, allowing TMC to add a unique permanent loft bedroom above the garage area; in the two Class C models, all sleeping arrangements are forward of the garage in the living quarters.
Differences between the two Class A’s – TMC’s Crider hinted that a third may be in the pipeline later this year – might initially seem to be mostly a choice between having a single streetside slideout in the 37LS, home to the dinette and sofa/air bed, or the two-slideout-equipped 37MD, but slideroom positioning really affects the floorplans. Everything from the loft access and wardrobe space to the bathroom and even the kitchen sink shifts, so each unit has its own personality. There’s a slight difference in overall length, as well, but each is built on the Ford F53, 24,000-pound-rated gas chassis.
In fact, you won’t find a toy hauler in the Class A market on anything but a Ford F53 chassis, a decision made to keep the price down on the versatile units. Newmar Corp. did offer a diesel-based garage coach several years back, but dropped it after Spartan Motors discontinued the mid-engine diesel chassis it was based upon. Today, the Napannee, Indiana, builder offers a pair of 39-foot, 11-inch gas Class A floorplans within its popular Canyon Star lineup.

“There’s just so much you can do with it,” said Dave Garl, Newmar account manager for the eastern states. “We have people on the East Coast who buy them for attending dog shows – you can’t damage the garage with water – and we’ve even sold them to people raising exotic birds.”
Building a more specialized motor­home isn’t unusual for Newmar – the Canyon Star line also includes a wheelchair-accessible unit with a wide aisle and very open floorplan – and the two models with near-8-foot-by-10-foot garages share the same sort of upscale amenities Newmar is known for. 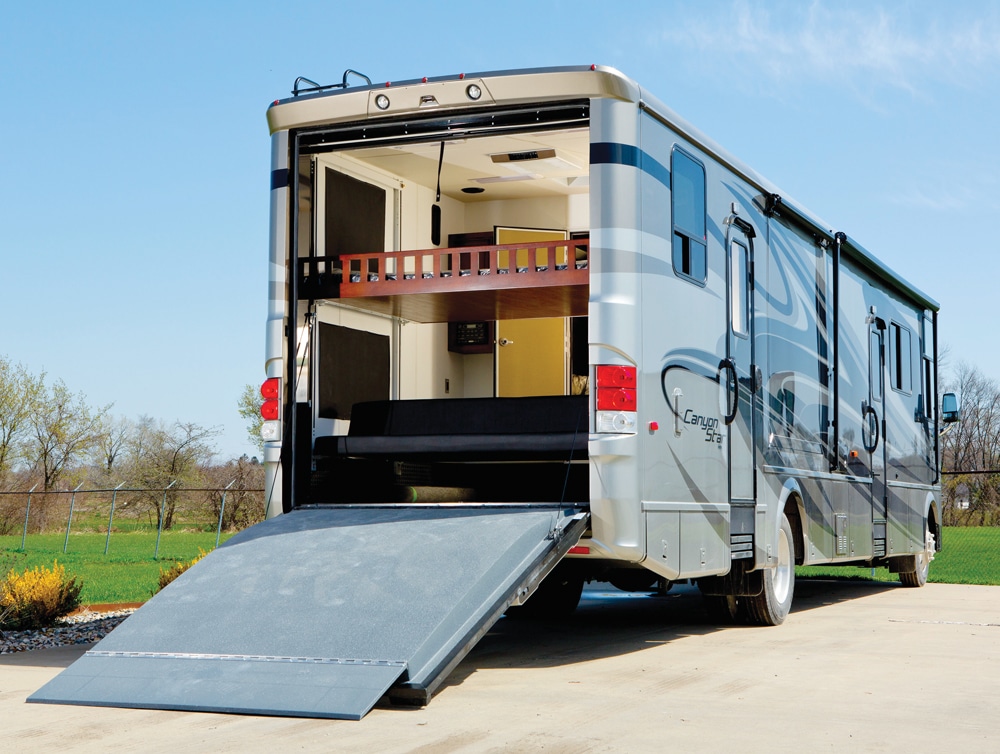 Where they differ is, again, in floorplan development and slideout rooms. Model 3921 incorporates the galley, dinette and a rear wardrobe in a full-wall streetside slideout while model 3920 uses a smaller slide on the same side to nestle the dinette and jackknife sofa. Both also feature curbside slideouts for the mid-coach queen bed.
Additionally, Newmar has fitted the garage with a pair of bunk beds that raise and lower using an electric lift. Maintained near the ceiling during travel, they can be lowered for two tiers of sleepers – and the bottom bunks convert into bench seats. The Canyon Star also sports a second curbside entry into the garage to reduce tracking dirt through the cabin.
And, while the garage area itself provides nearly limitless opportunities, the ability to transform a cargo ramp into a patio on larger coaches can’t be overemphasized. Given the limited floor space available in a motorhome, adding another 64 square feet or so of optional outdoor space can really “ramp up” the lifestyle.
There are other vehicle options, as well, depending upon the thickness of your wallet. While TMC offers the only Ford E-series Class C garage coach, a number of more specialized OEMs build “Super C” versions.

A relatively low-volume manufacturer specializing in custom motorhomes, toy hauler trailers, sports decks and race car stackers for big-trailer owners and professional racing teams, Elkhart, Indiana-based Haulmark Motor Coach has its $475,000 (MSRP) Motor Garage, a retro-looking motorized toy hauler assembled on a 500-horsepower Freightliner Cascadia truck sporting a lift gate for motorcycles or ATVs that converts to a patio in the stationary mode.
“We receive a ton of requests for a motor garage where you would have a double-slide coach with full living area and a separate bedroom, salon and galley with the ability of hauling motorcycles or ATVs in the rear,” noted Mike Nichols, national sales manager.
Among custom shops, Renegade RV, based in Bristol, Indiana, and ShowHauler Motorhome Conversions, Middlebury, Indiana, build to specification using, for the most part, Class 8 Freightliner trucks with weight ratings north of 50,000 pounds. 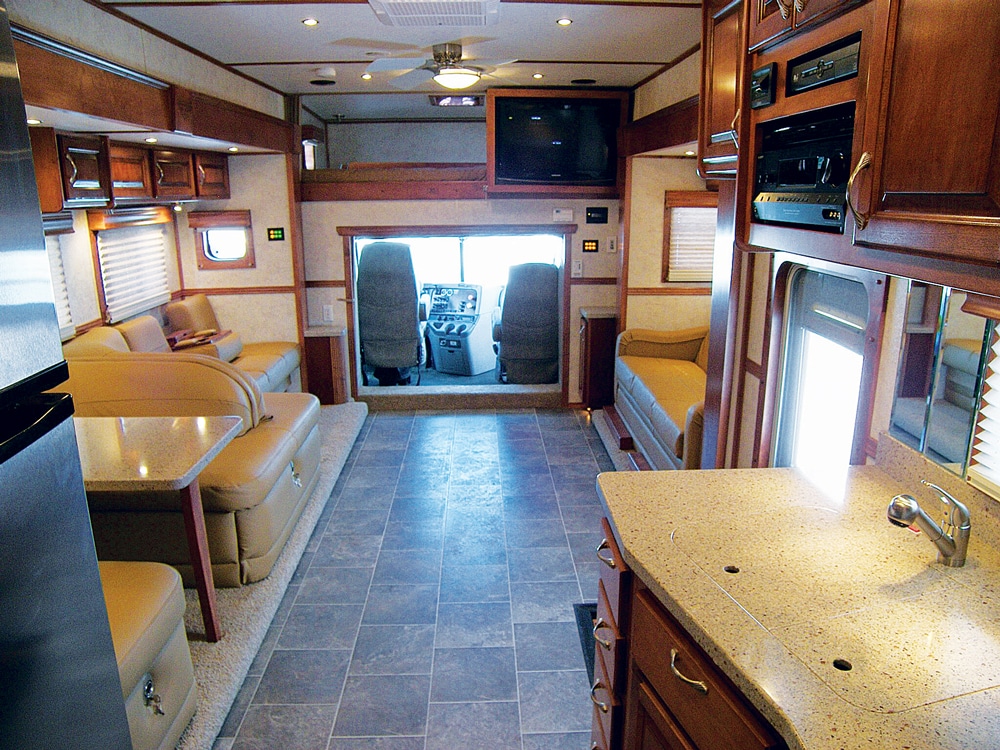 “All of our toy haulers are custom-built,” said Danny Lagunas, national sales manager for Renegade/Kibbi. “We work with the customer to find out how big of a garage he needs, then we’ll tell him how many feet of usable living space that will be available. He can use some of it, or all of it, so long as he doesn’t go beyond 45 feet.”
The biggest garage Renegade/Kibbi has constructed? “Twenty-six feet,” Lagunas responded. “That particular buyer was a collector-car enthusiast. He’d load his car into the unit to take to shows. We used a lift gate, the same one we use on our race trailer. It’s hydraulically operated and also serves as the rear door.”
That NASCAR-type of ramp/lift also figures prominently in many of ShowHauler Trucks’ units, where, as Sales Manager Lonnie Troyer pointed out, interior configurations run the gamut and all-steel construction provides a measure of strength. “Right now, for instance, we’re building one for hauling the car over the bedroom – so, there’s a garage in the bottom where we can put a golf cart in the bottom, and in front of it is the bedroom; on top, the owner puts his car. The area is massive.”
When it comes to filling the garage, there really is no limit to the versatility of a toy hauler. “I think that what makes the (toy hauler) motorhome stand out is that it’s fully contained. You don’t need a separate vehicle to go somewhere,” said TMC’s Crider. “And in a 30-foot Class C with an 8-foot garage, there are so many possibilities of ‘what can we use this for?’”

Bruce Hampson has been writing about cars, boats and RVs for more than 30 years. A former senior managing editor at MotorHome, he lives in the “RV Capital of the World,” Elkhart, Indiana.