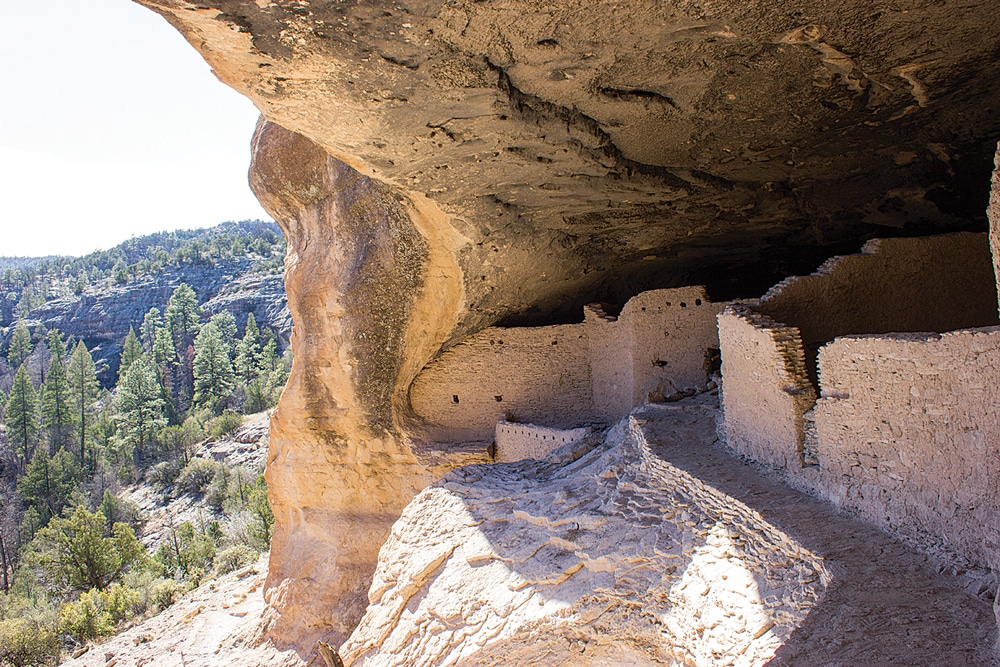 From subterranean curiosities to an ancient cliff city to a painting bear, southern New Mexico is a desert wonderland

Since New Mexico lies due south of our home state of Colorado, it’s a state my husband, Jim, and I visit often, usually on our way to somewhere else. We frequently notice places that look interesting and promise ourselves to go back someday. Last winter, we explored southern New Mexico for almost two weeks, zigzagging from east to west, and loving every minute of it.

More than 700 years ago, ancient Puebloan people built about 42 rooms inside five natural caves in the Gila Cliff Dwellings. Archaeologists believe eight to 10 families lived in this cliffside village.

Our first stop was Carlsbad Caverns National Park, a subterranean wonder 250 million years in the making. Development began when a reef formed in an inland sea. The reef was buried under gypsum and salts when the sea evaporated. Sulfuric acid dissolved the limestone along fractures in the rock. Billions of drops of water formed the stalactites and stalagmites over hundreds of thousands of years.
We learned all of this and more on our self-guided audio tour of the Big Room. Just one of 119 known caves at Carlsbad, the Big Room is the most accessible, with paved and lighted trails. It’s the largest single cave chamber by volume in North America, covering 8.2 acres. We stood in awe at the three massive speleotherms (cave formations) known as the Hall of Giants. Visitors can explore six other caves in ranger-guided tours. Some of these tours are for adventurous visitors willing to crawl, squeeze and climb through undeveloped caves.

Carlsbad’s other must-see attraction is the Living Desert Zoo and Gardens State Park. It features plants and animals that live in the southwestern Chihuahuan Desert, the largest desert in North America. Many of the park’s inhabitants are injured or orphaned birds, mammals or reptiles that can no longer survive in the wild. We walked along the 1.3-mile paved walkway to see mountain lions, pronghorns, bison and the zoo’s most famous resident, Maggie Oso, a black bear well-known for her artistic abilities. The gift shop sells her original paintings and greeting cards. Maggie’s birthday is celebrated on the third Saturday in January each year. The highlight is watching Maggie open her birthday present, a carton of dried fruits and nuts, wrapped with a fruit ribbon and sealed with peanut butter instead of tape.
When we returned to the Carlsbad KOA, we took the short nature walk to a nearby bird refuge. Frankly, we saw more birds in the trees in the RV park, but it was a lovely walk nonetheless. We got back just in time to have barbecue dinners delivered to our site. Baby back pork ribs, brisket and several other meats are smoked on site with pecan and mesquite woods. This was a first for me: an RV park that delivers delicious barbecue.
When we checked in at White Sands RV Park and MH Community in Alamogordo, I asked about attractions in the area besides the obvious. The young woman’s eyes lit up as she told me about Pistachio­Land, which includes McGinn’s Pistachio Tree Ranch and Arena Blanca Winery. It’s easily recognized on U.S. Highway 82; a giant pistachio sculpture sits outside. The family-owned business has 12,300 pistachio trees and close to 7,000 grapevines. We tasted the candies, flavored pistachios and wines, and bought a bagful of our favorites. Outdoor motorized tours of the orchards and vineyards are offered year-round, weather permitting.

Fifteen miles southwest of Alamogordo, White Sands National Monument lies in the Tularosa Basin, a mountain-ringed valley in the northern Chihuahuan Desert. The glistening white sands cover 275 square miles, making it the largest gypsum dune field in the world. During our visit, the park was filled with families picnicking, teenagers playing rugby, children building sand castles and people of all ages sliding down the dunes on sand sleds. At sunset, Jim and I joined a ranger-led tour. Our guide pointed out the amazing adaptability of desert plants and how they survive among shifting dunes. He pointed to a sand hill with what looked like a few small trees on top. It was actually a full-grown cottonwood tree covered by sand. When the dune moves on, the tree will be fine. The enthusiastic guide answered all of our questions, including why there’s no alcohol allowed in the park between February 1 and May 31. That seemed to me like an odd time frame for such a restriction, but that covers Easter, spring break and graduation. The rule is intended to prevent broken glass in the park.

Historic Old Mesilla is not far from the Hacienda RV Resort in Las Cruces. Mesilla has a colorful past. In 1848 the first permanent settlers built near the Plaza to defend against Apache raiders. In 1853, the Gadsden Purchase was signed in Mexico City, making a 29,670-square-mile region of present-day southwest New Mexico and southern Arizona part of the United States. Mesilla was a lively social center in the 1880s, attracting Billy the Kid and other outlaws. Today the Plaza is a popular spot for shopping and dining. The courthouse where Billy the Kid was sentenced to hang is a gift shop. What was once a stagecoach stop is now a popular restaurant, La Posta de Mesilla. Diners can choose authentic “New Mex” cuisine like fajitas and chile rellenos and a wide variety of margaritas from the tequila bar. Our waiter offered us a $350 margarita made from Jose Cuervo’s 250th Anniversary Tequila. I imagine it would be an excellent margarita, but I was perfectly satisfied with my prickly pear margarita for $8.50.

From Las Cruces, we headed west on Interstate 10 to Deming. The Deming Luna Mimbres Museum has an impressive collection of Mimbres pottery, baskets and arrowheads. We noticed holes in many of the pottery bowls. The Mimbres used pottery as part of their burial customs. These “kill holes” were created with a sharp tool to “kill” the bowl, releasing the bowl’s spirit and the spirit of the deceased. The bowl was then placed upside down on the deceased’s head. Beyond the Mimbres Pottery Rooms are eclectic collections that include Japanese porcelain, ladies’ hand fans with instructions on how “fan flirting” was done in the 1700s, office equipment from the 1900s and specialty liquor bottles including a complete set of Old Crow Whiskey bottles shaped like chess pieces, just to name a few. On several occasions, I thought we’d seen everything, only to discover another wing or floor of the museum.
Two state parks in southwestern New Mexico, Rock Hound and City of Rocks, are worthy of detours off I-10. Rock Hound State Park, south of Deming, sits aside the Little Florida Mountains. We arrived without a reservation to find a full campground. Just as we were ready to head on down the road, someone left early and opened a campsite for us. We were feeling lucky, so we thought we might find some of the gem rocks abundant in the area. Visitors are permitted to collect up to 15 pounds of mineral specimens, including quartz, jasper, geodes and thunder eggs. Serious prospectors come with hammers and chisels. For us, it was a good excuse to explore the area’s hiking trails. We left happy, but empty-handed. 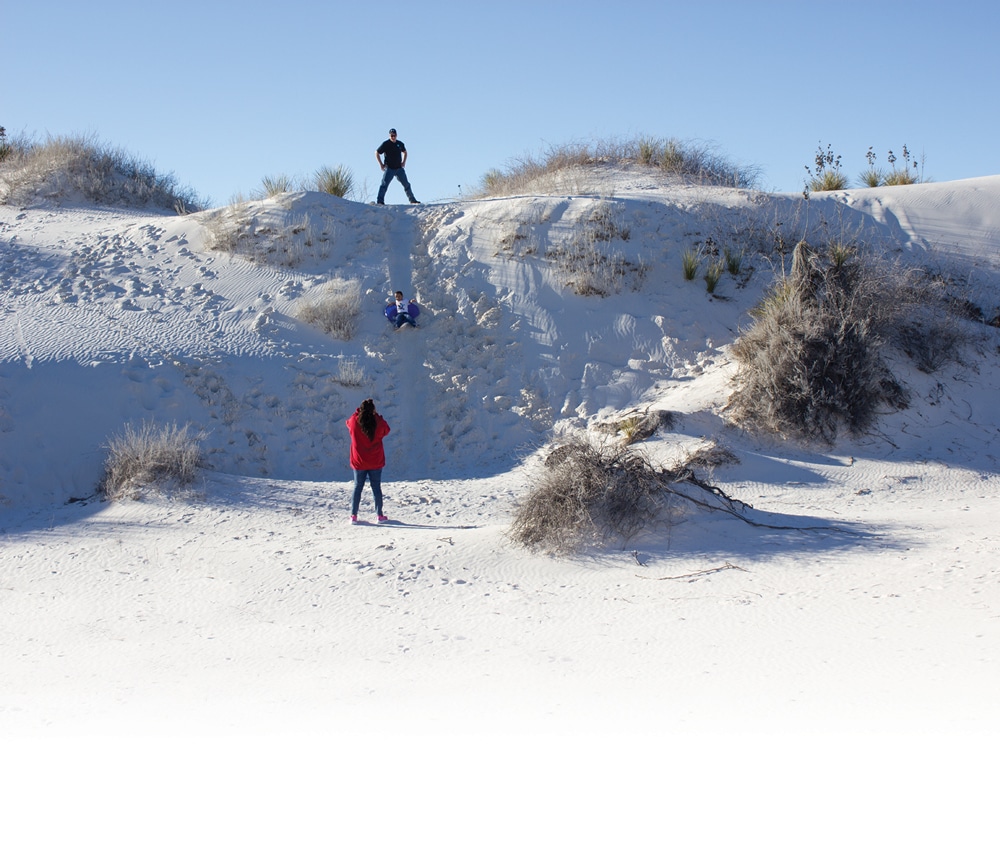 During the author’s visit to White Sands National Monument, it was filled with families picnicking, teenagers playing rugby, children building sand castles, and people of all ages sliding down the dunes on sand sleds.

City of Rocks State Park was created about 35 million years ago from a volcanic eruption a thousand times greater than Mount St. Helens. Wind and water then sculpted the rows of monolithic blocks that gave the park its name. Clustered in 1 square mile on an open plain, the rocks resemble a small city. The park, 30 miles north of Deming, is far enough from city lights to provide spectacular stargazing, even to the naked eye. If you time it right, you could be at the park for one of its “star parties” in the observatory.
We spent two nights in Silver City so that we could check out the town and visit the Gila Cliff Dwellings. Silver City’s charming business district, built in the late 19th and early 20th centuries, is now home to restaurants, shops and galleries. Always on the lookout for out-of-the-ordinary attractions, we found one at Syzygy Tileworks. They produce exquisite handmade artisanal tiles. The showroom – “one part sales, one part tile museum” according to production manager Josh White – features tiles made in-house and from other artisan tile-makers in the U.S. Syzygy offers free tours to the public. Later that day, 25 schoolchildren would be coming to play with clay and paint designs on tiles. Our tour was not so hands-on. We were content to hear White explain how each tile is cut, pressed and glazed with up to eight layers, and watch the artisans and craftsmen do their work. It takes about 10 days to turn a block of clay into tiles. Custom orders can take much longer. Such beauty comes with a price tag; Syzygy tiles retail from $26 to more than $300 per square foot.

The Gila Cliff Dwellings, 45 miles north of Silver City, were home to ancient Puebloan people more than 700 years ago. They built about 42 rooms inside five natural caves. Archaeologists believe eight to 10 families lived in this cliffside village. Why they stayed only a few decades remains a mystery. Located within the 558,000-acre Gila Wilderness, the 533-acre park became a national monument in 1907. When we arrived at the trailhead, we were greeted by National Park Service volunteers who pointed us in the right direction. From there, we climbed 180 feet above the canyon floor on the 1-mile-loop trail. At the dwellings, another volunteer shared her fascination about the area’s history.

Our final stop was at Rusty’s RV Ranch in the tiny town of Rodeo. We had a lovely site at the edge of the park with an unobstructed view of Mount Chiricahua just across the Arizona border. We visited the Chiricahua Desert Museum, known for its living collection of 35 species of rattlesnakes, with about 100 snakes in total. It also houses the largest collection of herpetological (reptiles and amphibians) wildlife art in the world. Much of the art, including more than 60 paintings and a 15-foot-tall rattlesnake-tail sculpture that rises above the Desert Botanical Garden, is the work of wildlife artist Tell Hicks. A gift shop carries Native American jewelry, Tell Hicks paintings, T-shirts and some of the prettiest greeting cards with embossed flowers I’d ever seen.
Our trip through southern New Mexico was all we’d hoped for and more. While well-known wonders like Carlsbad Caverns and White Sands National Monument lived up to their reputations, it was the little surprises that made our trip memorable: a bear that paints, learning how to flirt with a fan, and picturesque and peaceful campsites. 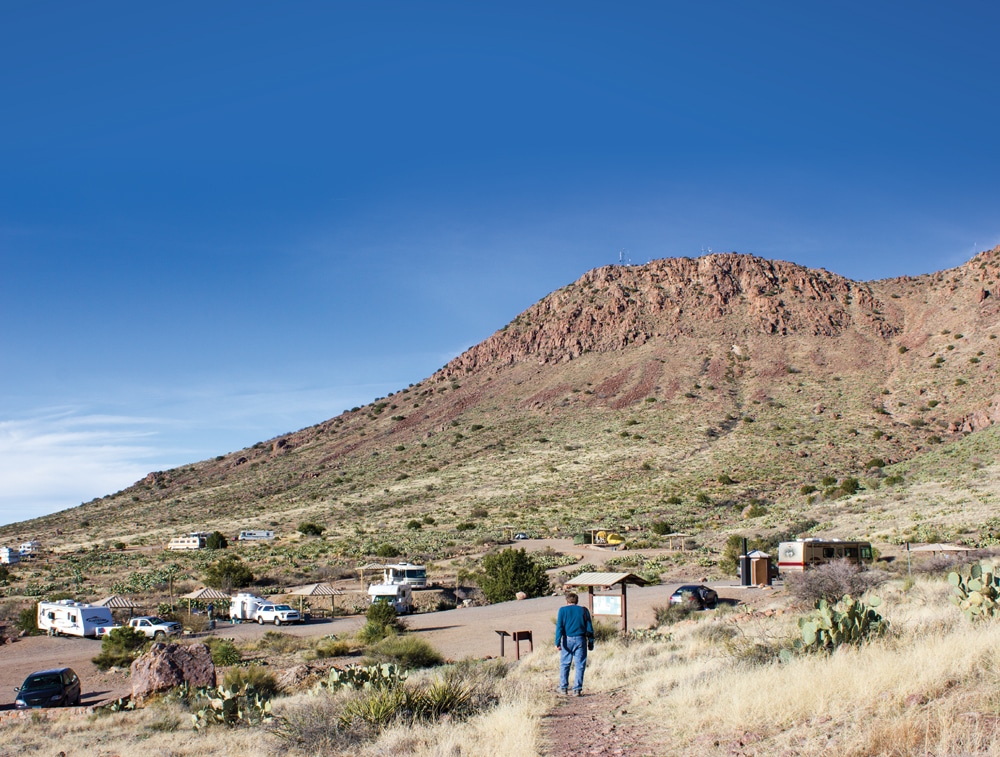 Visitors at Rock Hound State Park are permitted to collect up to 15 pounds of mineral specimens, including quartz, jasper, geodes and thunder eggs.