Which Type is Right For You? 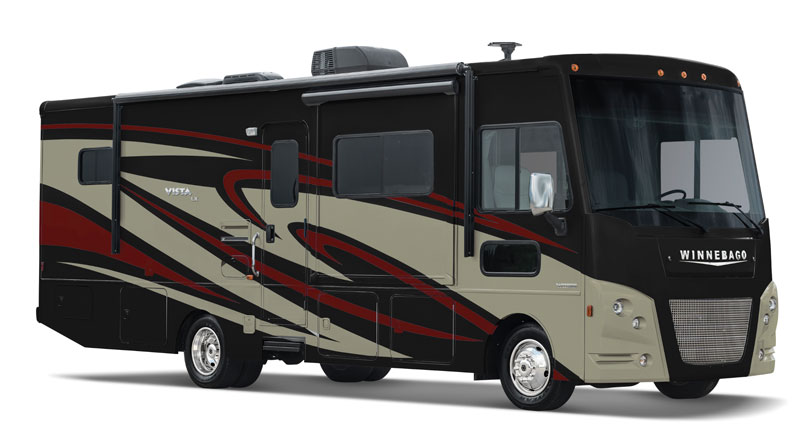 Learn about the different kinds of motorhomes, and what each has to offer, to find out which one’s best for you.

If you’re thinking about buying a new, or new-to-you motorhome, you know that it’s a bit more complicated than it might seem. It’s not just choosing a floorplan, countertops and a paint scheme.

In order to deliver enjoyable experiences and a load of happy campers, it’s important to understand the differences between motorhome types.

Although any RV is a great way to enjoy the company of friends and family while experiencing the great outdoors, each of the different motorhome categories listed below offers its own list of pros and cons (relatively speaking).

Regardless of which type you select, we’re certain you won’t be disappointed. For at-a-glance convenience, along with the ins and outs of each, we’ve included some of our favorite features offered by each motorhome type, plus a few points you might want to consider before laying your money down.

Remember, RV selection is a personal decision, so there really aren’t any right or wrong answers, although we at MotorHome magazine think the motorized route is the best way to travel!

Class A’s are the large, often box-shaped RVs that are what most people think of when they hear the word “motorhome.” These coaches require a bit of a learning curve for operation, as the steering column is sometimes even with or slightly ahead of the front axles, much like on a city bus. That may sound intimidating, but in fact these rigs are fun to drive, and are tough to beat in terms of what’s included.

Class A motorhomes offer a wide array of residential amenities and creature comforts.

Class A motorhomes begin at the factory as rolling chassis with the drivetrain and steering wheel in place. From there, the manufacturer essentially builds the entire length of the walls and roofs, meaning there is a bit of wiggle room for floorplan variety. Gas-driven Class A’s generally feature the engine up front, while the often larger, more robust diesel drivers are generally known as “pushers” due to the power plant residing out back (there are a few exceptions, of course). Class A motorhomes can range from about 25-45 feet, and can cost from $100,000 to upward of $1 million (for a custom-built bus conversion), depending on size and configuration.

That price range is easily justified, as Class A’s are great for entertaining and tailgating, and are typically outfitted with just about anything you would want in a home-on-wheels: slideouts, a spacious galley, larger bed configurations, solid-surface countertops and a bathroom with separate toilet and shower facilities (sometimes even two). As with all motorhomes, unless you tow a dinghy vehicle, traveling the surrounding area necessitates completely breaking camp.

What we like: Fully appointed, plenty of space, diesel-pusher power
Keep in mind: Learning curve to drive, cost, fuel economy, dinghy vehicle needed, storage can be an issue

Also referred to as camping van conversions, Class B’s are manufactured on van chassis, meaning they are easier to drive for first-timers due to increased visibility, size and the fact that many drivers have experience behind the wheel of a similarly handling vehicle (a small cargo van or even a larger minivan). Class B motorhomes tend to be much more nimble than their larger counterparts, and can deliver mileage that rivals or even bests many larger passenger vehicles. The van chassis are modified slightly for RV purposes, often stretched longer and taller for more usable area. And perhaps the greatest asset of owning a Class B is the fact they can be used as everyday commuters or can be parked in your driveway with little in the way of modifications to the existing structure. 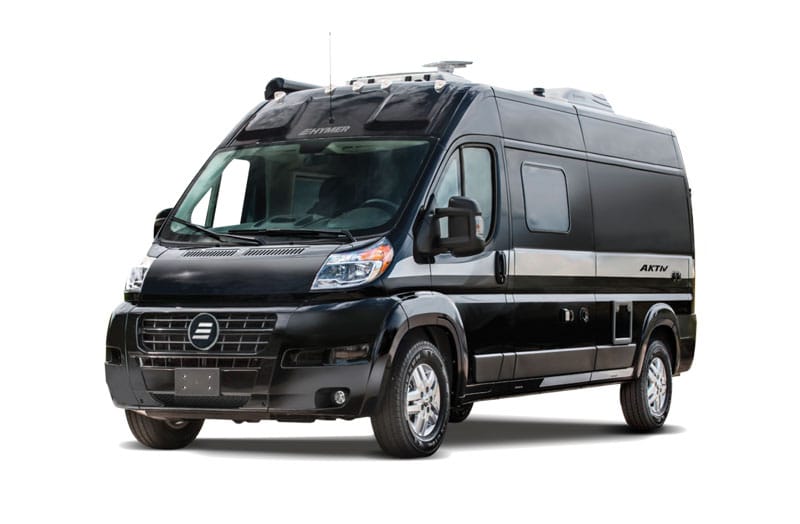 Class B motorhomes are a favorite among RVers who want a second commuter vehicle that’s easy to drive.

The trade-off to the easy driving and storage is space: A smaller platform means tighter quarters, though for a traveling couple, that may be just the ticket. Bathrooms tend to be of the portable or wet variety – either a cassette toilet, or lavatory in the shower – and sleeping accommodations are generally limited to two to four very intimate occupants. And even though they’re smaller in size, these days, Class B’s pack in a host of amenities to enhance livability. They usually include a full galley, and the furniture in the “living area” can often be reconfigured from travel mode to a more inviting, relaxation-type atmosphere. Class B’s aren’t cheap – they start around $70,000 and can easily creep above the $150,000 mark – but remember you’re essentially getting a commuter vehicle and an RV in a single package. They can range in length from 17 to 28 feet.

What we like: Good fuel economy, easy to drive and park, can be used as a daily commuter
Keep in mind: Cost and limited space

Class C motorhomes are instantly recognizable by their cabover sleeping/storage areas, much like on some 18-wheeler rigs, but in a much more pleasant-looking package. Class C’s combine the maneuverability of a Class B (though not quite as nimble) with the spacious living of a Class A (though not quite as wide open). And that cabover area makes Class C’s a popular choice among RVing families.

Class C motorhomes begin as a full-size van cab and frame, to which the manufacturer adds the floor, roof and walls. Depending on size, a Class C can offer the same amenities as a Class A motorhome (especially the popular Super C’s), and the familiar chassis is no doubt a lure to those entering (or who already are established in) the lifestyle. 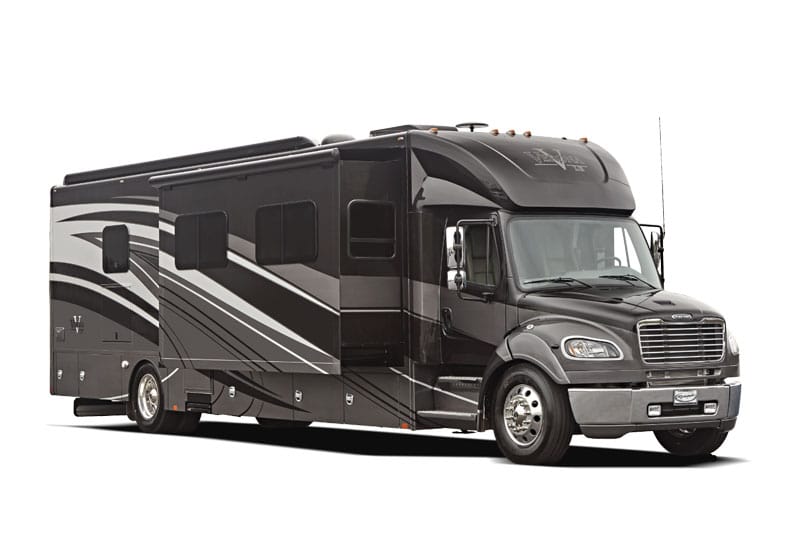 Class C motorhomes offer a combination of Class A amenities and Class B maneuverability. Larger Class C’s can pack on even more luxury, along with a powerful drivetrain.

Plus, with the growing popularity of diesel-based Sprinter-type chassis, Class C’s are more effectively bridging the gap between A’s and C’s, bringing even better gas mileage without sacrificing livability space. Prices for a conventional Class C generally start at around $75,000, though some of the aforementioned Super C’s can reach a quarter-million dollars. Class C motorhomes generally range in length from 21 to 45 feet.

What we like: Generally easier to maneuver than a Class A, fully appointed, decent fuel economy on some chassis, family-friendly, sleep up to eight
Keep in mind: Cabover sleeper can be difficult to access, cost, underpowered engines at times, dinghy vehicle may be needed

Generally, a toy hauler features a garage in the rear of the vehicle with tie-downs for hauling off-road vehicles, motorcycles, snowmobiles and the like. These handy vehicles are available in only a few motorhome floorplans. 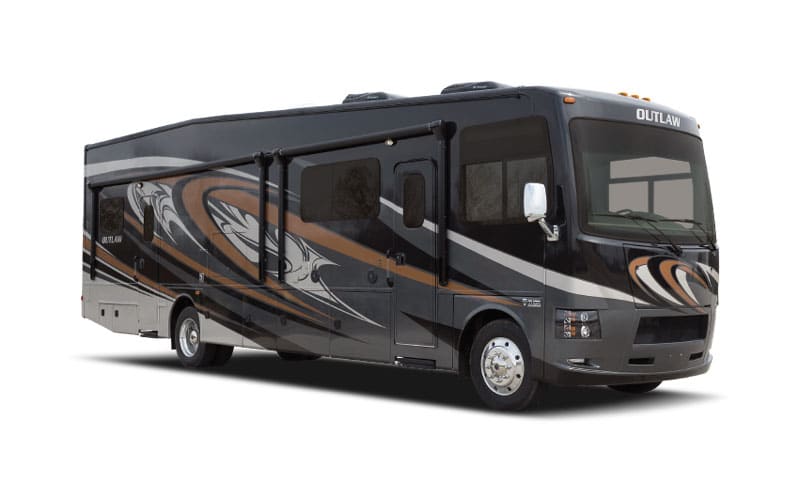 The Thor Motor Coach Class A Outlaw Toy Hauler comes in two floorplans; both have a rear garage and patio deck.

The garage area is typically separated from the living area, which does necessitate a bit of a compromise when it comes to livability space. However, remove those adult toys and the garage often features a second living or sleeping area, outfitted with fold-down beds, a dining table and/or an additional entertainment center. Some even offer a separate bathroom in the garage area, while still others include an onboard fuel station to fuel those wheeled toys for off-pavement pursuits without having to travel back to civilization.

Prices start around $124,000, and can work their way above and beyond the top of the Class A price range.

What we like: Bring along your toys, upscale interiors available, auxiliary fuel stations available
Keep in mind: Can be pricey for the livable square footage, not many motorhome models available, weight distribution with toys requires increased attention to detail