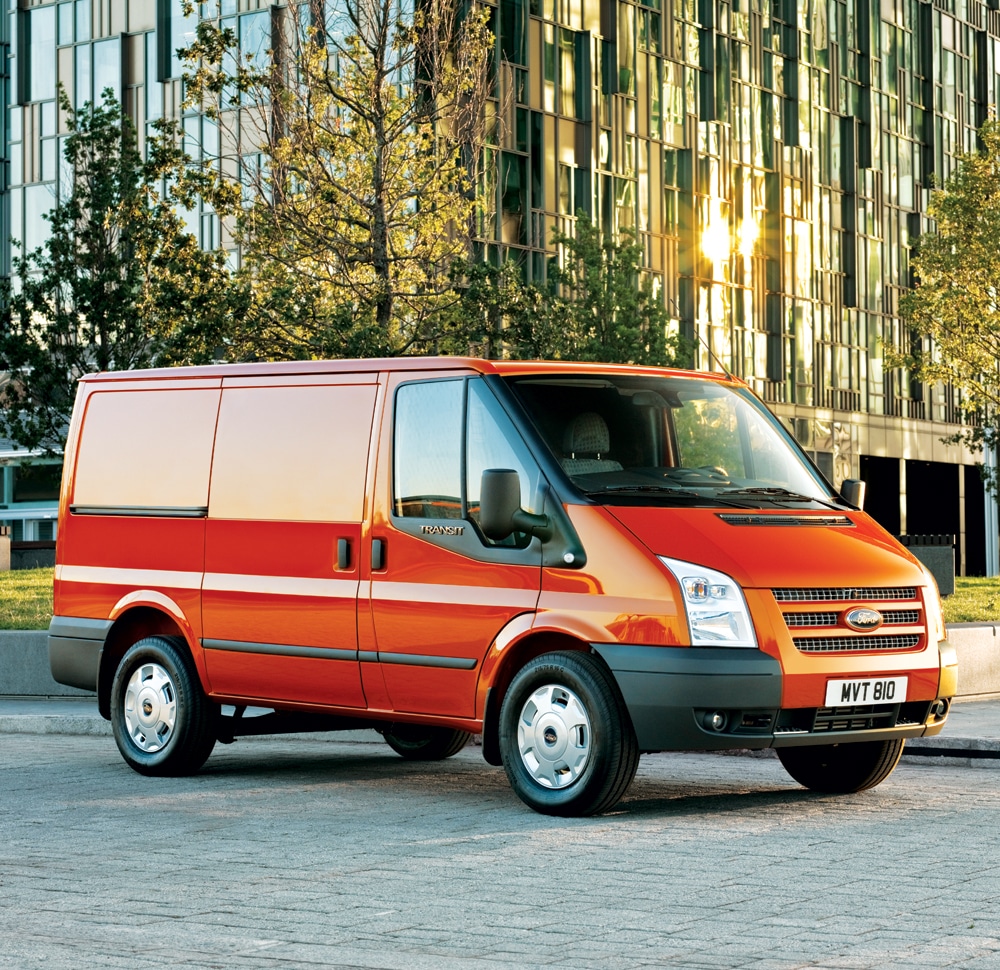 The Class B motorhome market changed for 2014 with two new European-based platforms: the ProMaster van from Chrysler’s Ram truck division and the Ford Transit van. Both will challenge the decade-long market supremacy of the diesel-powered Mercedes-Benz Sprinter chassis, which, as an RV platform, outsold the domestic Chevy Express van by more than two-to-one in 2012. The Chevy Express has been the Sprinter’s primary competitor in the RV market since Ford mothballed the popular Ford E-series van in 2012.

Camper van builders are quickly adapting. Winnebago Industries got a jump on the market with the introduction of the long-anticipated Travato van camper on the Ram ProMaster chassis, while others have plans to add the 2015 Ford Transit to their stable.
The suddenly increased competition in the Class B market portends well for consumers. More chassis mean more choices with regard to price, floorplans and powerplants.
Horsepower and gross vehicle weight ratings (gvwr) for Ford’s unibody Transit haven’t been established yet, but the chassis will be equipped with a V-6 gas or 3.2-liter diesel engine with wheelbases from 130 to 147 inches. The Ram ProMaster, powered by a 280-horsepower 3.6-liter gasoline engine, features high- and low-roof models with a gvwr of 9,350 pounds and wheelbases up to 159 inches, while the Chevy Express provides a gvwr up to 9,600 pounds with a 324-horsepower 6.2-liter powerplant.
Although new to North America, both the ProMaster, based on the Fiat Ducato, and the Ford Transit, upfitted for the U.S. market, have long been used in Europe as motorhome and commercial van platforms.

“Transit has been available in Europe for more than 40 years,” said Craig Hall, Ford Motor Company’s specialty vehicle marketing manager. “It’s not a new vehicle, per se.”
Hall says the Transit — not to be confused with the smaller Transit Connect — will be available in several lengths, roof heights and weight ratings. “Fuel prices are going up, and the consumer wants better fuel mileage, which the Transit will provide,” he said.
The Ram ProMaster also has a long history. “The ProMaster is a proven platform,” said Joe Benson, head of Ram commercial trucks. “It’s been on the European market for over 30 years, and 4.5 million have been sold worldwide. Two out of every three RV owners [in Europe] have chosen the Ducato on the Fiat platform.”
Meanwhile, the Class B king, Mercedes-Benz, isn’t sitting still. The luxury European manufacturer modified the 2014 Sprinter chassis with a redesigned front end and new four-cylinder diesel engine that is expected to get 15 to 18 percent better fuel economy. Most van camper manufacturers that build on the Sprinter chassis will make the change to the new chassis in the middle of their 2014 model year.
Here’s a look at what some prominent B-van manufacturers are offering this year, plus a couple of “B-plus” motorhomes.

Factory-direct Advanced RV LLC of Willoughby, Ohio, offers an optional ‘’Independence Package’’ in the all-diesel Gulf Coast and Ocean One Class B motorhomes that include two solar panels to charge a set of lithium-iron batteries that also can be charged by a shore connection or through an optional generator attached to the engine. Standard with diesel appliances — including a hydronic heating system and on-demand hot water — the Gulf Coast is built on the standard 22-foot Sprinter chassis while Ocean One 24-footer is assembled on the Sprinter’s dual-wheel extended platform. Both include a touch-screen Silverleaf multiplex system to monitor tank levels and batteries; it also acts as a thermostat and starts the generator. Although highly customizable, Gulf Coast and Ocean One are

Jackson Center, Ohio-based Airstream Inc.’s Interstate Class B has been the best-selling van camper brand for the last three years and will be mounted on the 2014 Mercedes-Benz Sprinter chassis with a standard 161-hp 6-cylinder diesel engine by the time you read this. Available in seven 22 and 24-foot floorplans on standard and extended Sprinter chassis, the Interstate has been

Great West Van Conversions Inc. of Winnipeg, Manitoba, Canada, builds three van campers: the Legend, Legend SE and Legend XE — all mounted on the Mercedes-Benz Sprinter diesel platform with a gvwr of 11,030 pounds. Two floorplans, one with a tri-fold rear bed, the other with twin beds, are available in all three models. The Legend and upgraded Legend SE are 22 feet, while the Legend XE is 24 feet and offers more living space, a longer bed and four coach batteries. Both the Legend SE and XE are equipped with hydronic heating/hot water, along with a standard 85-watt solar panel. All models feature solid wood cabinets, recessed LED lighting, Avonite countertops and laminate hardwood-look floors.
Base MSRPs: Legend, $110,000; Legend SE, $120,000; Legend EX, $128,000.
Great West Van Conversions
204-338-9303
www.greatwestvans.com

Pleasure-Way offers two Class B platforms in varying lengths — the 19½-foot Ascent and 22-foot 9-inch dual-wheel Plateau on the Mercedes-Benz Sprinter; and the 20½-foot Lexor on the Chevy 3500 Express. GVWRs are 8,500 pounds on the Ascent, 11,030 pounds on the Plateau and 9,600 pounds with a 320-hp gas engine on the Lexor. Pleasure-Way will start building on the 2014 Mercedes-Benz Sprinter equipped with a 4-cylinder diesel engine when they become available later this year. Standard features include a private bath and shower, maple cabinets, Corian countertop, stainless steel sink and two-burner stove/cooktop. Its 2014 RVs come with a 5 Year/60,000 mile limited warranty.
Base MSRPs: Lexor, $87,000; Ascent, $109,000;
Plateau, $111,540.
Pleasure-Way Industries
800-364-0189
www.pleasureway.com

Roadtrek Motorhomes Inc., Kitchener, Ontario, Canada, has introduced for 2014 the 22-foot CS-Adventurous series built on the Sprinter dual-wheel chassis with a gvwr of 11,030 pounds.
The floorplan is versatile with three captains chairs up front and a rear convertible sofa or twin beds, either of which can be converted into a king-size sleeping platform. The front-seating and rear-sleeping areas allow two people to get up and go to bed at different times without disturbing each other. Features on the new CS-Adventurous include frameless windows, marine toilets, engineered granite countertops, cherry cabinet doors and heavy-duty vinyl flooring. An optional E-Trek package allows the coach to be operated ‘’off-the-grid” with an engine-mounted 3500 watt generator, eight 6-volt solar-charged AGM batteries and an Alde comfort heating system that includes hot water.

Winkler, Manitoba, Canada-based Triple E RV has designed a driver-side slideout
in the 2014 Leisure Travel Vans Free Spirit FS22SS Class B motorhome. Built on
the Mercedes-Benz Sprinter
chassis with a gvwr of 11,030 pounds, Triple E will give the buyer the option of a 4- or 6-cylinder diesel engine when it goes into production with the 2014 Sprinter chassis. New to the 22-foot 9-inch Free Spirit for 2014 is an electric convertible sofa, new roof trim with integrated power awning
and a 4.8-cubic-foot refrigerator. The FS22SS, one of two Free Spirit floorplans, takes a cue from European designers with curved cabinets and a self-contained lavatory. Standards include contoured Corian countertops, radius windows and powered patio awning.

Winnebago Industries Inc., long an innovator in the Class B market, has introduced the Travato motorhome assembled on the Ram ProMaster chassis with a gvwr of 9,350 pounds. The more affordable 21-foot, front-wheel drive Travato from the Forest City, Iowa, manufacturer is equipped with a 280-hp V-6 gasoline engine that gets an esti­mated 15 to 18 mpg. With more vertical side walls than Winnebago’s Sprinter-based Era Class B, the Travato provides 4 additional inches of shoulder room and offers features such as a soft vinyl ceiling, LED interior lights, shower, powered patio awning, laminate countertops, two-burner range and a refrigerator with a
removable freezer unit.
MSRP: $84,039.
Winnebago Industries
641-585-3535
www.winnebagoind.com

Bob Ashley is a columnist for RV Business magazine and has covered the industry for nearly 20 years. He is a recipient of the “Distinguished Service in RV Journalism” award from the Recreation Vehicle Industry Association (RVIA).