Whet your appetite for adventure at Niagara Falls, where there’s more to do in this fascinating border-crossing region than being enthralled by the mighty waterfalls

Honeymooners have traveled to Niagara Falls since before Napoleon ruled France. In fact, Napoleon’s younger brother, Jerome Bonaparte, visited the falls with

his first bride, American Elizabeth Patterson, in the early 1800s. But the future king of Westphalia and his new wife couldn’t hold a candle to the effect Marilyn Monroe had on the popularity of Niagara Falls as a getaway for lovers. 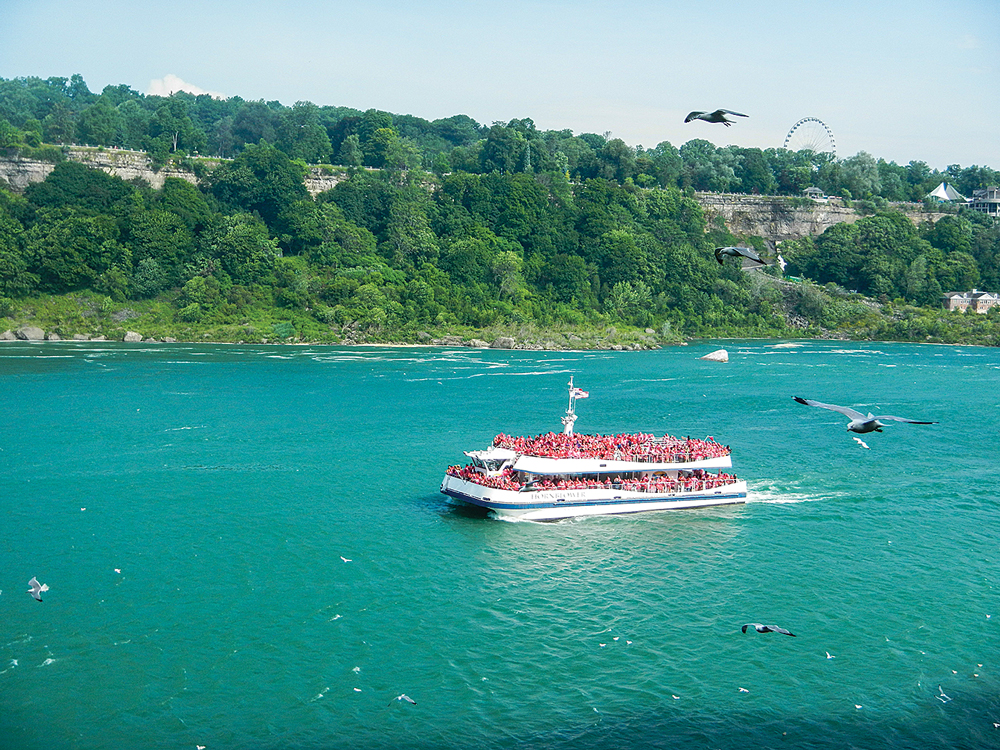 A packed passenger ferry heads up the Niagara Gorge toward the famous falls.

In the 1953 movie Niagara, Monroe plays the steamy seductress Rose Loomis, vacationing at Niagara Falls with her gloomy, neurotic husband, George (Joseph Cotten). Rose plans to do away with George, by — you guessed it — sending him over the falls, so she can take up with another man. However, two honeymooners, Polly and Ray Cutler (played by Jean Peters and Casey Adams), intervene. It’s a soggy, predictable plot, but the audience gets doused with spectacular views of the falls. The film also whets viewers’ interest with scenes at Cave of the Winds, a series of wooden scaffolds beside Bridal Veil Falls, and aboard Maid of the Mist, the sightseeing boat that ferries tourists past American Falls and Bridal Veil to the base of Horseshoe Falls, the largest of the three falls that make up Niagara’s famous cascades.

The falls straddle the U.S.–Canada border, 20 miles north of Buffalo, New York, where the Niagara River gushes into a deep gorge. Horseshoe Falls blocks the end of the cliff-framed ravine separating the U.S. and Canadian sides of the river. American Falls, the second largest, streams next to the 230-foot observation tower on the U.S. side. The smallest — and this is relative, as it’s still impressively large — is Bridal Veil Falls, adjacent to American Falls.

The boardwalk to Cave of the Winds climbs beside Bridal Veil Falls, one of three enormous cascades that make up Niagara Falls.

In addition to the waterfalls, the communities on both the New York and Ontario sides of the river are called Niagara Falls. The American side has Niagara Falls State Park, New York’s oldest state park. The Canadian side is more developed with large hotels and an urban, commercial feel. Remember to bring a passport or passport card for each person — although technically, only a birth certificate is required for minors under 16. If a minor is traveling with only one parent, a letter of consent from the other parent is highly recommended (www.ezbordercrossingcom).
Geologically, Niagara Falls is only about 11,000 years old. It formed as the continental ice sheets receded at the end of the last ice age. Originally located between Lewiston, New York, and Queenston, Ontario, the falls have eroded 6.8 miles to their present location. While the current rate of erosion, 1 foot per year, is a third of its historic rate, scientists estimate that the falls will erode the remaining 20 miles to the source of the Niagara River at Lake Erie and disappear in another 50,000 years.

A gull guards her nest by the path to Cave of the Winds.

An average of 60 tons of rock particles flows over Niagara Falls every minute, giving the water a stunning aqua-green color. The volume of water crashing over the falls varies by the season and time of day. When Lake Erie is at its highest (in the spring) and hydroelectric power needs are curtailed, as much as 225,000 cubic feet of water per second flow over the massive cascades. During the summer, at the height of the tourist season, about 100,000 cubic feet of water goes over the falls per second, 90 percent of which tumbles over Horseshoe Falls.

After a visit to the falls, sampling some of the Niagara region’s many wines is a popular way to spend the afternoon. It’s one of the largest grape-growing areas in North America, with 30,000 acres of vineyards. Since the 1800s, the area has attracted grape-growers with its well-drained soil and proximity to Lake Erie and Lake Ontario, which create a moderating effect on the region’s climate. Today, you can drive along New York’s well-marked Niagara Wine Trail, which goes to 22 wine-tasting locations among acres of rolling farmland and friendly rural communities.
Some of the tasting rooms are at the vineyards where the grapes are grown. Others are at wineries that use local grapes to create their signature wines. The region is gaining a reputation for its pinot noirs, chardonnays, cabernets, Rieslings and Syrahs. You can also sample wines made from New York’s native concord and Niagara grapes. As a special treat, look for a tasting room that serves ice wine, a rare dessert wine made from grapes that are picked on the coldest night of the winter.

Flight of Five Winery in a renovated city hall in Lockport, New York, is named for the series of five locks through the middle of the town. Lockport is an admirable example of how towns along the once heavily industrialized banks of the Erie Canal are transforming into attractive tourist destinations.

Gate of Five Nations, the outer gate and drawbridge at Old Fort Niagara.

Local farmers and hundreds of British, German and Irish immigrant laborers built the 363-mile canal, which was completed in 1825 at a cost of $7 million. An important shipping route connecting Lake Erie to the Hudson River, the canal reduced the cost to ship a ton of goods from Buffalo to New York City to $10 per ton, $90 less than pre-canal days. However, when rail travel became commercially widespread in the late 1800s, the canal diminished in importance, eventually ceasing to be used for the transport of cargo.
Today, the canal is used mainly by recreational boaters. A cruise on the canal through the Lockport Locks is a relaxing way to spend the afternoon after a turbulent morning at Niagara Falls. The open-top boat ride starts with a peaceful poke down a forested portion of the canal, then through the five locks in the town of Lockport. Along the way, passengers get a sense of the history of the canal and what it was like in its heyday, as a great shipping lane.

The French Castle at Fort Niagara across the parade grounds guards Lake Ontario and the mouth of the Niagara River.

For an even earlier step back in time, Old Fort Niagara in Youngstown, New York, near the mouth of the Niagara River, is a must-see. The French established the fort in 1679 to control the Great Lakes, both for the resources provided and because the lakes offered an early route into the interior of the continent. The British captured the fort during the French and Indian War, only to give it up to the Americans twice by treaty, the first time at the end of the American Revolution and the second time after the War of 1812. The United States continued to use Old Fort Niagara as a training facility until 1963.
Visitors can wander through the fort’s superbly maintained buildings and grounds, which still hum with colonial-era activity. Touring the sleeping quarters and commissary, you can imagine life at the fort during the early 1800s. Dressed in military uniforms from the various French and British periods of occupation, interpreters teach Old World ball games to modern-day kids. A blacksmith hammers iron hooks in the forge. Soldiers play cards with no numbers, because in those days some soldiers couldn’t read. Another soldier discusses personal maintenance during the 18th century, explaining how colonial soldiers suffered tooth decay because their charcoal toothpaste stripped the enamel from their teeth, and that they bathed only twice per year because the weather was too cold and the soap, made of lye, burned their skin.
A climb up the winding stone stairwell to the top of the French Castle, the main stronghold of the fortress, gives an unobstructed view across Lake Ontario through old lead-glass windows, more pink and blue than clear, and an appreciation for just how huge the lake is. 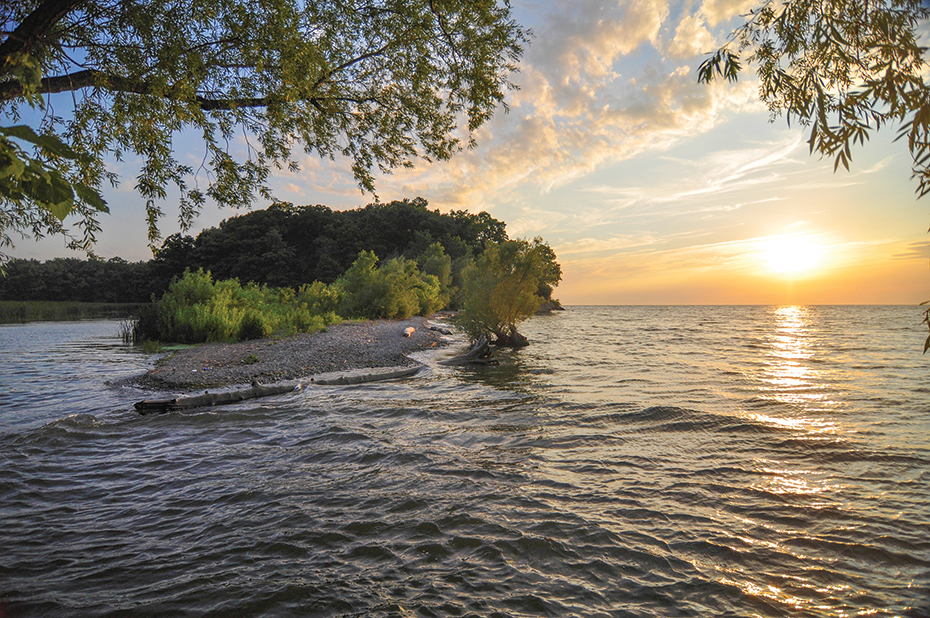 The easternmost and smallest among the five Great Lakes, Lake Ontario is an enormous freshwater sea, covering 7,340 square miles. It forms a natural 250-mile boundary between the United States and Canada, from Old Fort Niagara at the northwestern corner of New York state to Cape Vincent at the start of the Saint Lawrence River. Luckily, one of the best lakeside RV-camping spots on Lake Ontario, Four Mile Creek State Park, is in the Niagara area, a couple miles east of Old Fort Niagara and 15 minutes north of Niagara Falls.
Four Mile Creek State Park has hiking trails on the wooded bluffs above the shoreline and a broad lawn extending to the edge of the water, the perfect place to pitch a lawn chair, read a book and watch the sunset. Don’t be surprised if a whitetail deer wanders by your RV or a great blue heron lands on your picnic table. The campground is also close to Lewiston, yet another historic spot, made famous during the Civil War era as the departing point into Canada for slaves escaping via the Underground Railroad. Lewiston is also home to Artpark, a unique state park that hosts open-air concerts and theater productions.

The Maid of the Mist noses passengers into the bottom of American Falls.

Thinking of a trip to Niagara Falls? There’s more to the area than impressive waterfalls. While it remains a popular destination for honeymooners, it also appeals to history buffs, wine lovers, families and adventurous types who like to get intimate with powerful forces of nature.

A Toast to Niagara

If you love wine but tire of the usual cabernets and chardonnays, you’ll love tasting the many varietals and hybrids in New York’s Niagara region. Twenty-two wineries line the Niagara Wine Trail (www.niagarawinetrail.org). Here’s a taste:
Chateau Niagara Winery, Newfane: Behind its huge oak doors, you’ll find a number of less familiar wines including kagor, a dessert wine once made exclusively for Russian czars and now produced in the western hemisphere only by this winery.
www.chateauniagarawinery.com

Long Cliff Vineyard and Winery, Sanborn: This tasting room was originally built as a hog barn but now pours Rieslings, pinot whites and Lemberger reds. www.longcliffwinery.com
Schulze Vineyards and Winery, Burt: Among German-born Martin Schultze’s many wines, look for the sweet, rare ice wine, produced from grapes picked during the coldest night of winter.
www.schulzewines.com
Flight of Five Winery, Lockport: The only urban tasting room on the trail, Flight of Five is located beside the Erie Canal and named for the series of five canal locks below its front door.
www.flightoffivewinery.com
Honeymoon Trail Winery, Lockport: With more than 30 wines to choose from, wine lovers can mix tasting and romance by the winery’s massive fireplace. www.honeymoontrailwinery.com
Johnson Estate Winery, Westfield: The oldest estate winery in New York has produced wine since Prohibition from grapes grown on its 120-acre vineyard. www.johnsonwinery.com

It is illegal to go over the falls, with stiff fines and penalties from both the U.S. and Canadian governments, but that hasn’t stopped people from trying. Since the early 1800s, many have attempted various stunts around
and over Niagara Falls.

Camping Near the Falls

The Niagara Falls area has no shortage of RV accommodations, including the following New York state park campground and eight Good Sam Parks on both sides of the U.S.–Canada border.