Whale of a Time! 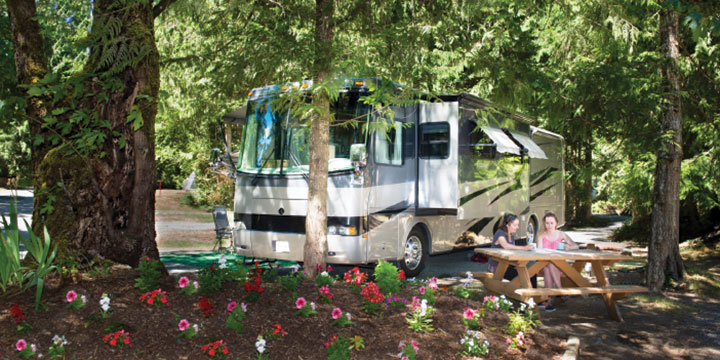 A ferry ride away from the mainland, British Columbia’s bustling seaport of Nanaimo has it all, from natural beauty and spectacular wildlife to outdoor activities and iconic treats

“Thar she blows!”
Sure enough, just 200 yards ahead of our open-air Zodiac boat was a small pod of killer whales (orcas), surfacing repeatedly with plumes of vapor shooting from their blowholes. Rebeka, a very knowledgeable marine naturalist and our tour guide with Vancouver Island Whale Watch, even knew some of their names.

These were transient whales, as opposed to residents, she told us, both of which can be found in coastal waters from Southern California to Alaska. The two species do not communicate or interbreed. Transients eat mammals such as seals and sea lions, whereas residents eat fish, primarily salmon. The baby in this pod was born the previous year and may live up to 50 years.

After watching these magnificent creatures from a respectable distance for nearly an hour, we moved on to observe and learn about seals, sea lions, eagles, cormorants and a variety of geological features. Opportunities to appreciate nature, as we experienced on this whale-watching tour, are just one reason that Nanaimo (nah-NY-mo) is one of our favorite destinations in British Columbia.

Situated on the eastern shore of Vancouver Island, the harbor city has picturesque ocean and mountain views and an abundance of activities for visitors. To explore this unique destination, we booked a week at Brannen Lake RV Park, conveniently located close to downtown.

Whenever we arrive in a new place worthy of exploration, our first stop is a visitor center to gather information about various activities such as museums, tours, trails and entertainment. The visitor center in Nanaimo provided enough brochures to keep us busy for the week, including one on the Nanaimo Bar Trail. The Nanaimo bar is a layered dessert with a crumbly base, creamy custard filling and chocolate topping that is definitely a West Coast treat, just like its namesake city.

On Tourism Nanaimo’s list of Top 10 Things to Do, the Nanaimo Bar Trail was rated number one. As avid hikers and dessert aficionados, my wife, Sandy, and I were supremely interested in visiting some of the trail’s 39 stops that offer traditional Nanaimo bars and tasty derivations. This was going to be a tough assignment, but somebody had to do it!

Reportedly, the first published recipe of the Nanaimo bar was in 1952 in the Women’s Hospital Auxiliary Cookbook, on display at the Nanaimo Museum. Various exhibits in the downtown museum showcase artifacts and provide information about the region’s history. The museum is a good place to get to know the city, but make sure it is open before you go. At press time, it was closed as a precaution during the coronavirus outbreak. 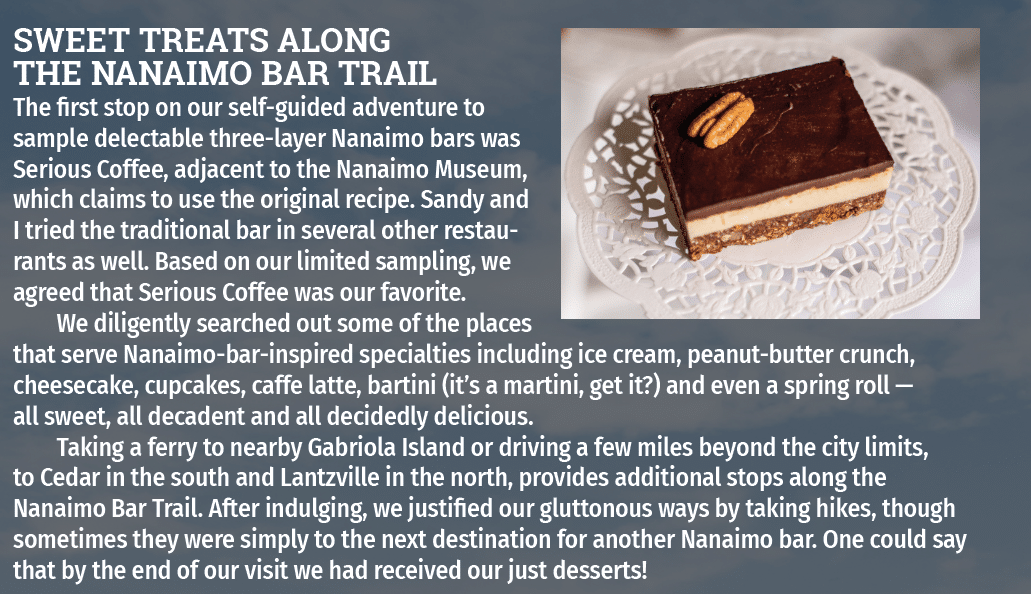 We spent three hours at the museum, learning about the coal-mining, logging and fishing industries that helped shape the city, in addition to First Nations history and more recent lifestyle activities, including Nanaimo’s largest event of the summer, the Great International World Championship Bathtub Race, which attracts participants and spectators from all over the globe.

The Coal Mine exhibit takes museum-goers into a darkened room that has the look and feel of an underground mine shaft. In this interactive exhibit, you can hear the stories of men who worked in the local mines between 1852 and 1952, when coal mining in Nanaimo provided steady employment for European settlers. Maps of the mines show a labyrinth of tunnels extending for miles under the sea.

When the main mine closed in 1938, it was the oldest and most productive mine in British Columbia. Today, retail and tourism are major contributors to the local economy, making this year’s COVID-19 closures particularly difficult for the city.

Smack-dab in the middle of the exhibits are benches resembling giant Nanaimo bars with information about this world-renowned dessert, which was served at a 2016 White House state dinner attended by Canadian Prime Minister Justin Trudeau. The earliest recipe is on display for anyone who would like to replicate the original. Some eateries in Nanaimo sell the classic bar, while others have modified the recipe to include specialties.

The nearby Bastion, a three-floor wooden structure overlooking the harbor, stands as a symbol of Nanaimo’s coal-mining industry. Built as a defensive structure by the Hudson’s Bay Company in 1853, the Bastion had two second-floor cannons for short-range defense and two longer-range cannons outside. During the summer, when the museum is open, a brief bagpipe ceremony at noon includes a ceremonial firing of one of the outside cannons. 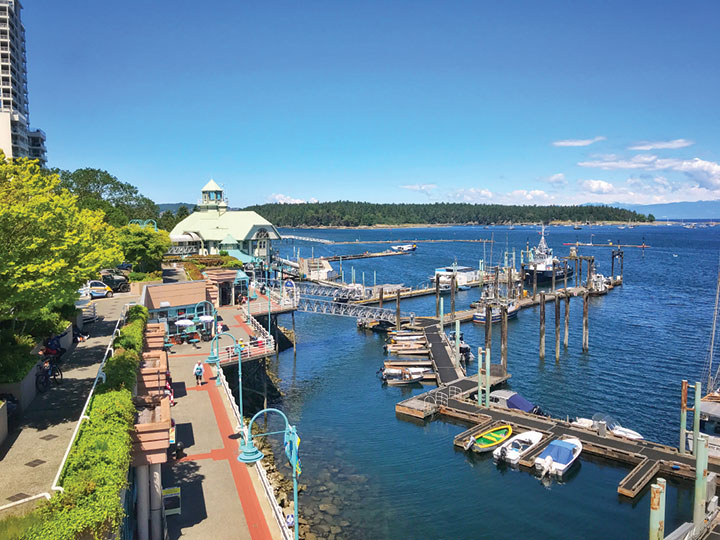 We rented a couple of kayaks from Coastal Expression to explore the western shore of Saysutshun Island (previously called Newcastle Island), traditional land of the Snuneymuxw First Nation and site of the first coal mines. During our leisurely half-day paddle, we observed raccoons, seals, otters, sea stars, bald eagles and Canada geese leisurely feeding on seagrass along the shore. Cliffside sandstone sculptures, formed from eons of erosion, slowed our pace as we marveled at the intriguing shapes. Reportedly, this island is the only place on earth with white raccoons, but none came to greet us.

Paddlers and sailors frequently visit the floating Dinghy Dock Pub on nearby Protection Island for eats, drinks and entertainment. We tied off our kayaks at the easy-access dock for a bite and a sip. Aye, matey, you’d be hard-pressed to find a more swashbuckling interior for wannabe pirates. Nautical paraphernalia hangs from every nook and cranny, with mermaid and pirate photo-ops. Even the address suits the theme: 8 Pirate Lane. The outdoor patio provides spectacular views of anchored yachts, the harbor and towering Mount Benson, a forested peak overlooking Nanaimo. Our lunch was outstanding, complementing the surroundings.

If you’re less inclined to kayak, a walk-on ferry runs from the downtown marina to this restaurant and pub, providing not only a mariner’s perspective but a designated driver as well. At press time the Dinghy Dock was open, but the ferry was limited to 10 passengers. Make sure to check online for schedules and protocols during your visit.

Strolling along the Harbourfront Walkway from the Bastion north to Maffeo Sutton Park is another Nanaimo must-do activity. This short stretch, ideal for wheelchairs, strollers and dog walking, allows access to quaint shops, restaurants, a zip-line, the walk-on ferry to Saysutshun Island, captivating sculptures and occasional musical entertainers. The park includes a man-made pond and sandy beach suitable for children.

A multicultural dance festival and a dragon-boat race took place during our visit. Strategically placed benches allowed us to observe the sights and festivities while enjoying Nanaimo-bar gelato from one of the nearby shops.

Hiking, biking and historical trails are abundant in the area. Grandpa’s Trail at our campground is a mostly shaded walk to nearby Brannen Lake, which offers a private sandy beach, dock and swimming platform. Deer, bullfrogs, barred owls and Canada geese graced our presence along the way. 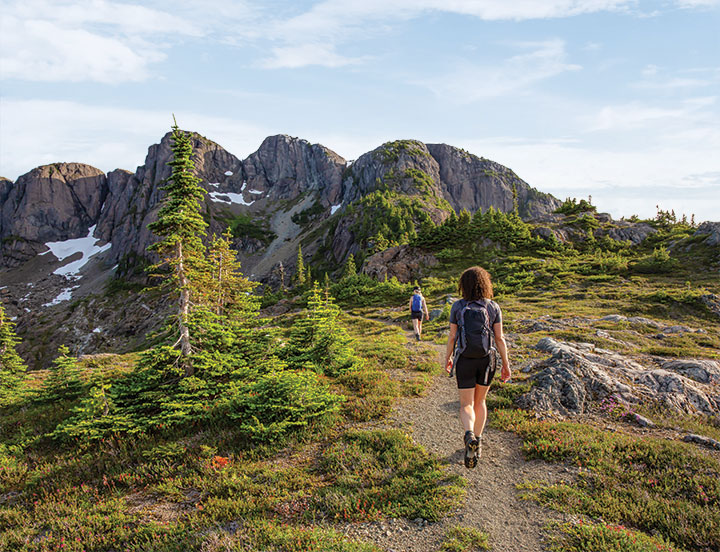 Peak Experience: Expect stunning views on a sunny-day hike to the 5,968-foot summit of Mount Arrowsmith, the highest point on southern Vancouver Island.

At Newcastle Island Marine Provincial Park (Saysutshun), totem poles serve as reminders that this island was home to native peoples more than 2,000 years ago. Arbutus trees, lilies, ferns, berries and cattails are abundant in summer along a dog-friendly scenic trail that follows the coastline around the island.

For more adventurous hikers, Ammonite Falls is a 30-minute trek with a rope-assisted descent to view the peaceful cascade. One of the most challenging local hikes is the two-hour climb up Mount Benson, which on a clear day provides expansive views of Nanaimo and across the Georgia Strait to the mainland. This strenuous hike will certainly work off a few Nanaimo bars.

Self-guided tours such as the Railway Connection Walk, Harbour Connection Walk, Coal Connection Walk, Chinatown and Nob Hill Park provide a glimpse of Nanaimo’s history, including numerous century-old buildings. Just taking a stroll along Commercial Street in the historic downtown core, where many of the buildings display Edwardian-style architecture, gave us the feeling of stepping back in time.

One of our favorite sections of Nanaimo is the Old City Quarter, a few blocks from the harbor. Cobbled walkways between century-old buildings, sidewalk cafés, restaurants, specialty shops and old-fashioned streetlamps adorned with hanging baskets of colorful flowers offer unique sights and scents. During our visit, a New Orleans Jazz Band, made up of local musicians, entertained an appreciative audience.

To embellish the ambience, we savored Nanaimo-bar lattes from a nearby coffeehouse while tapping our toes to the Dixieland rhythms. We both agreed that life doesn’t get much better than this.

You’ll need more than a week to experience all that this vibrant city has to offer, including sailboat and floatplane sightseeing tours, fishing charters, golfing, wineries, breweries, a casino, a military museum, an art gallery, and, of course, the sweetest part of the trip, the Nanaimo Bar Trail.

Brannen Lake RV Park is a big-rig-friendly campground with shady sites and a private beach on its namesake lake.
www.brannenlake.com

Known for its lush gardens, Jinglepot RV Park and Campgrounds is right off the Nanaimo Parkway and near the Departure Bay ferry dock.
www.jinglepotrv.ca

South of the city, 40-acre Mountainaire Campground and RV Park has 120 RV sites with full and partial hookups.
www.mountainairervpark.com

To reach Vancouver Island from the mainland, you’ll need to take one of four ferry routes: from Tsawwassen or West Vancouver in British Columbia directly to Nanaimo on BC Ferries; from Anacortes, Washington, to Sidney on Washington State Ferries; or from Port Angeles, Washington, to Victoria on the Black Ball Ferry Line.

To reach Vancouver Island from the mainland, you’ll need to take one of four ferry routes: from Tsawwassen or West Vancouver in British Columbia directly to Nanaimo on BC Ferries; from Anacortes, Washington, to Sidney on Washington State Ferries; or from Port Angeles, Washington, to Victoria on the Black Ball Ferry Line.