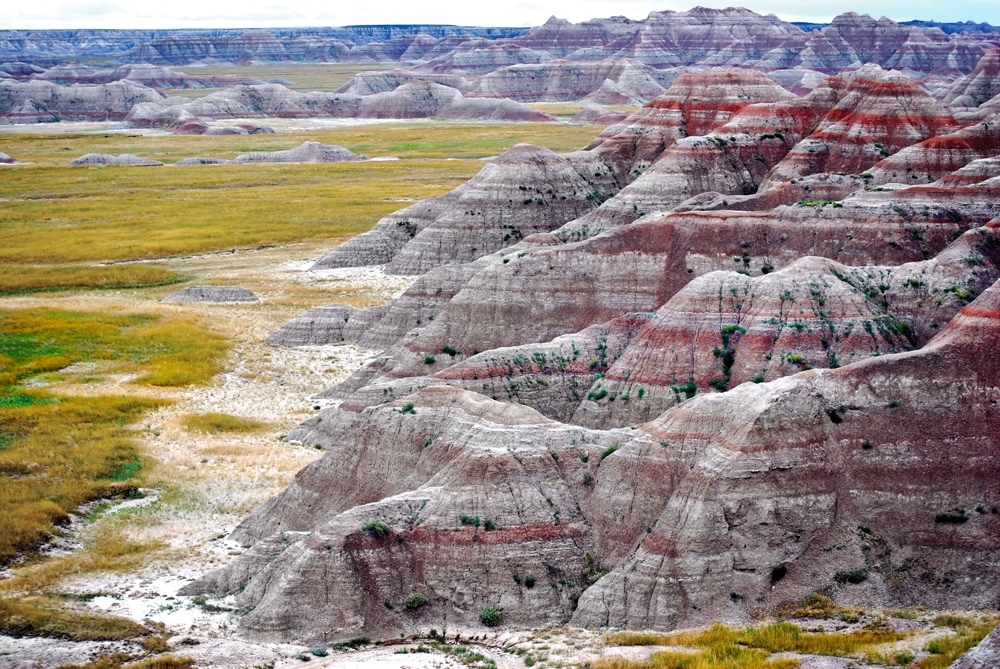 The Black Hills of western South Dakota have long been a favorite of RVers. We came to this area to explore the natural side of the Black Hills – the plants and animals, geology and natural history that existed before the trappers, miners and homesteaders came – and we weren’t disappointed.

Traveling east on Highway 85, the moment we pass out of the endless high desert sage of Wyoming we begin to climb into South Dakota’s Black Hills. The land changes to rolling, pine-covered inclines of Black Hills National Forest. We climb up and up, only to descend steep grades to our first stop, Jewel Cave National Monument.

The Black Hills are honeycombed with limestone caves. One of the most spectacular (and with 162 miles of passages is the third longest explored cave in the world)  is Jewel Cave. Caving experts think only 5 percent of Jewel has been explored.

Ranger Dorothy Perkins meets us for the half-mile, 70-minute Scenic Tour. We board an elevator and descend 240 feet in less than 30 seconds, emerging into a large, cool (49 degrees Fahrenheit) room with a 40-foot-tall ceiling. Experts believe the cave and others in the region were formed more than 350 million years ago when the area was an inland sea. The area’s Lakota Native Americans knew about the region’s caves, considered them sacred and never entered them. Jewel was discovered by brothers Frank and Albert Michaud in 1900 and, soon after, opened for tours.

We move along a series of metal staircases and cement walkways. The lighting illuminates special features such as jewel-like calcite, nubby dogtooth spar crystals, stalagmites, stalactites and vivid colors of various minerals – red iron oxide, yellow dolomite, black manganese. There are places where the rock appears almost liquid, flowing in long ribbons or cascading and dripping like solidified honey. We stop to admire the “bacon and eggs” formation, calcite that resembles multi-colored strips of bacon and two sunny-side-up eggs.

Halfway through the tour, Perkins turns out the lights. It is completely black and several in our group laugh nervously. Then she turns on a small light. The tiny flame is swallowed up by the cave’s darkness.

We pause at the lowest known point in the cave, seven stories below the surface, and ooh and ahh at the cave’s largest and highest room with a 110-foot ceiling. And soon we’re back at the elevator, which whisks us back to the surface.

Our next “natural” stop is in Hill City, a quaint Western town about 25 miles north of Jewel Cave National Monument. Driving a motorhome in the Black Hills is both beautiful and challenging. Most roads are curvy two laners with plenty of up-and-down elevation changes. Visitors, especially those driving larger rigs, should plan routes carefully against the map for width and weight restrictions caused by tunnels on roads like US16A and SR87.

The topography of the Black Hills makes it a rockhound’s dream. Everywhere there are crystals and semi-precious stones. In fact, Fairburn agate, a colorful fortification agate considered the “gem of South Dakota,” can be found from Lusk, Wyo., to central South Dakota. Everywhere we go we stuff our pockets with beautiful rocks. The topography and geology have also made this area rich in fossils, the reason we’ve come to Hill City.

The town has plenty of jewelry stores and souvenir shops, but it’s the Museum at Black Hills Institute we’re here to see. We pass through the gift shop, step through a small gate into the museum and our mouths drop open. The little 1938 former city auditorium is crammed full of skeletons of the fearsome Tyrannosaurus rex, marine animals and fossils from all over the world. The founders of the Black Hills Institute of Geological Research have put this impressive collection together.

Millions of years ago the Black Hills area was covered by warm seas and swamps and boasted a tropical climate, our guide tells us. It was also home to plenty of large dinosaurs like the T. rex. In fact, it was a volunteer from this institute who found “Sue,” the largest and most complete tyrannosaurus skeleton ever discovered. Because the find was on deeded land placed in trust, the federal government seized Sue and the
T. rex is now displayed in  Chicago’s The Field Museum. The Museum at Black Hills Institute has “Stan” on display, the second largest T. rex that was also discovered in South Dakota.

The museum additionally has a collection of giant ammonites, called the “jewels of ancient seas,” that are related to the modern day squid. There is also the world’s largest shark’s tooth, which belonged to a shark 60 to 70 feet long. In addition to skeletons and fossils, the Zeitner Roberts Mineral Room boasts a huge collection of eye-catching minerals, crystals and semi-precious stones, including a spectacular 4.5-foot-long amethyst geode with spiky purple crystals and a huge piece of green Nephrite jade from the Yukon.

Some museums skimp on educational information, but not the Museum at Black Hills Institute. Each display has a plethora of fascinating and easily understandable information. We explore for nearly three hours, but road fatigue finally catches up with us. We bid our host goodbye and head for Rafter J Bar Ranch Campground a few miles south on Highway 16.

This 210-site camp on 170 acres of rolling meadow and pine is organized into six individual camps, three with their own shower/bathroom house. Most of the camps are nestled under shady pines, though some are near open meadows. The park is located on an original homestead and was a former Deadwood Stage stop (it still has the original barn). It offers a small cafÃ©, a gift shop and convenience store. It also has a seasonal outdoor pool and hot tub and we spend a comfortable evening listening to owls call from the pines.

Our visit to the Black Hills Institute Museum intrigued us so we head south on highways 385/89 to the little town of Hot Springs and The Mammoth Site, one of the largest mammoth finds in the world and an active archaeological dig. We’re met by Dr. Larry Agenbroad, the site director and chief scientist, who takes us into the 36,000-square-foot research and visitor’s center. When Agenbroad opens the door to the indoor dig site, we’re awed. Everywhere we look are huge mammoth skeletons – tusks, thighbones, skulls, vertebrae – partially or completely covered in dried mud. Some lie alone, while a few have collapsed onto other 10-ton mammoths, creating giant piles of the precursor to the modern day elephant.

“This is a genuine, 3-D mammoth jigsaw puzzle,” says Agenbroad, chuckling. “We think this was a sinkhole and that 26,000 years ago young male mammoths were attracted to it because the warm water kept the vegetation green. They became trapped in the hole and couldn’t get out.”

Agenbroad has been directing this mammoth dig since the first animal was uncovered in 1974 when someone called and said, “I think we have mammoths here.”

They did. To date, Agenbroad and his team have unearthed 60 mammoths, most giant Columbian mammoths. Unlike the more familiar woolly mammoth, Columbian mammoths don’t have thick, woolly coats and they look more like today’s elephants. And they were big, 10 tons with 11-foot tusks, standing 13 feet tall at the shoulder (woolly mammoths, a few of which have been found here, are a few tons lighter and a few feet shorter).

Mammoths weren’t the only ones trapped in the sink hole. They’ve found short-faced bears, including one at 1,500 pounds and standing 12 feet tall on its hind legs, as well as ancient camels and wolves.

Agenbroad believes the sink hole is very deep, and that it will yield many more creatures. Because The Mammoth Site is so rich in bones, volunteers and professionals dig only one month a year, uncovering so much material it takes Agenbroad and his staff the rest of the year to process, preserve and catalog the finds.

We step into an exhibition hall and the full impact of these giant mammoths greets us in towering reassembled skeletons and models of complete mammoths, as well as skeletons and fossils from around the world. There’s a short-faced bear skeleton and a model of the baby mammoth unearthed with skin and hair intact and made famous by photos in National Geographic.

We leave The Mammoth Site with our heads filled with visions of a South Dakota millions of years ago and head north on Highway 385/87 toward Custer State Park, our destination for the night. This route, though beautiful, is windy and slow. We enter the park and drive the Wildlife Loop, spotting herds of buffalo, mule deer, pronghorn and flocks of wild turkeys scattered over wheat-colored rolling hills topped with oak and pine.

Our site in the Game Lodge Campground offers large, flat sites next to a small pond, fire pits, picnic tables, and large and clean showers. We walk the dogs on a creekside trail that leads to State Game Lodge, a four-story Arts and Crafts log structure built in 1920 that served as the summer White House for Calvin Coolidge and Dwight Eisenhower.

As the sun sets, rain spatters the roof, softly at first, then in earnest, thrumming steadily throughout the night.

We wake to rain-washed air and cool blue skies and reluctantly leave Game Lodge Camp. We could easily spend several days in Custer State Park, but our time in South Dakota is dwindling and we’re eager to
experience the state’s infamous Badlands. We tool east on Highway 36 to 79 and finally onto Interstate 90 and churn 50 miles through strong prairie headwinds to the entrance of Badlands National Park.

We stop at the first overlook, Pinnacles, for a 180-degree view of tortured, eroded cliffs that seem to stretch to the horizon. The 244,000 acres of South Dakota Badlands got their name from French trappers who called them mauvaises terres a traverse, meaning “bad lands to cross.” And, indeed, it would be impossible to cross these cliffs, gullies, washes and canyons on foot or by modern conveyance.

Scientists believe that 37 million years ago the crystalline core of the Black Hills had already been exposed by erosion. Streams flowing from the west deposited sediments here, mostly wind-blown volcanic ash. The ash weathered into clay and eventually rock. Then, a half million years ago, erosion began to gully the Badlands into its present otherworldly landscape.

We pass two young bighorn sheep with massive curled horns along the roadside that cause a brief traffic jam. At Burns Basin Overlook, one of many broad pullouts perfect for RVs, there’s a platform cantilevered over the canyon for a dizzying view of weathered cliffs. At White Rock Overlook, the landscape changes from eroded, striated hills to tall, almost lacy peaks like something you’d see in a “Men on Mars” ’50s sci-fi movie. We stop at Fossil Exhibit Trail and walk among the gnarled cliffs, careful where we step after seeing several “Caution, Rattlesnake” signs.

We crest Norbeck Pass and angle down to Cedar Pass Campground, one of several RV-friendly campgrounds in the park. The upper and lower paved loops offer easy pull-ins with electricity and restrooms (no showers). It also has water spigots and a dump station.

When the sun sets, the sky is inky black. When I take my dog out, the moon is rising over those eerie Martian mountains, casting a silvery light on their sharp silhouettes. The sight makes me suck in my breath at this, another spectacularly natural part of western South Dakota.