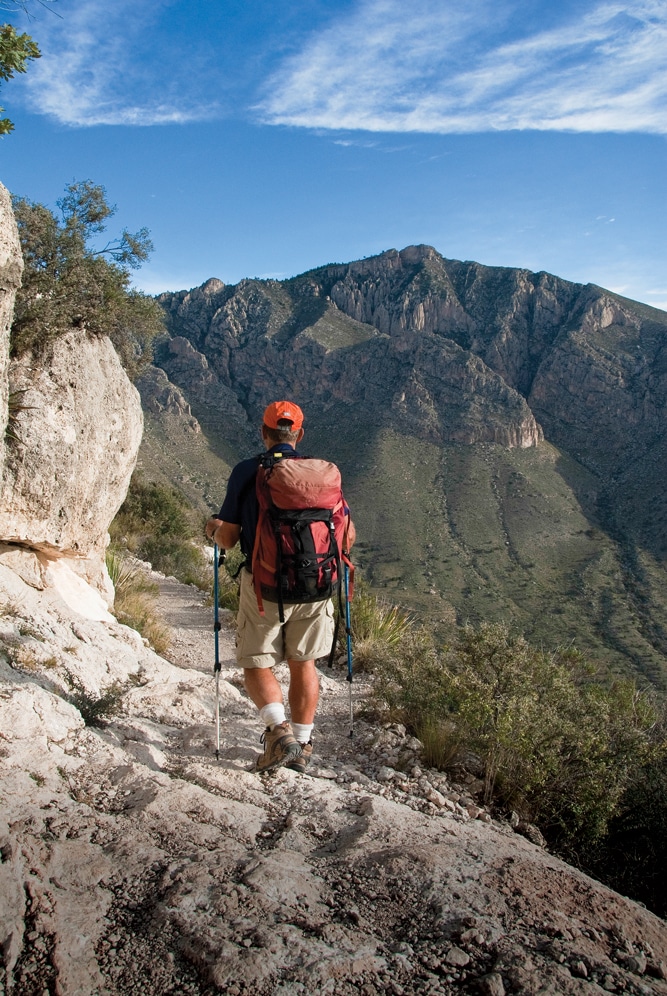 From a distance, you wouldn’t suspect that the rugged peaks and desert flats of the Guadalupe Mountains are a national park filled with grassy meadows, maple and pine forests — and a birder’s paradise

Guadalupe Mountains National Park, designated in September 1972, is many things. It’s a beautiful 86,416-acre oasis, an island in the desert. Some say it is the most beautiful spot in Texas. If you sit on top of Guadalupe Peak, at 8,749 feet, the highest point in Texas, you’ll probably agree. It’s also a safe haven for wildlife and plants, and it has much to offer in the way of trails for hiking and exploring. It can also be a very windy destination. Most important to me, it is the place where I found my husband — Mike and I met on the top of Texas in 1997.

Hiking the Guadalupe Peak Trail can be strenuous, though rewarding.

Guadalupe Peak Trail may look like a daunting climb, but it’s one of those hikes where it seems like no time at all has passed before you’re standing on top. Although the hike is not above the tree line, much of the 3,000-foot elevation gain offers outstanding views of the surrounding mountains, deserts and plains.
A memorial marker stands on the summit, placed there by American Airlines on the centennial of the Butterfield Overland Mail Trail. Carrying passengers and U.S. mail, the Butterfield Stage Line passed near this site for the first time on September 29, 1858, en route to San Francisco. The memorial proclaims that it is “dedicated to the airmen who, like the stage drivers before them, challenged the elements through this pass.”
The Guadalupe Mountains are remote, even by west Texas standards.
The range extends 50 miles, running north to south and straddling the Texas–New Mexico border. Formed beneath an inland sea 260 to 270 million years ago, the Guadalupe peaks that rise nearly 9,000 feet into the heavens were an ancient reef. Geologists from around the world come here to see one of the world’s best examples of Middle Permian geology.
Congress designated nearly 47,000 acres (more than half of the park) as wilderness, and it is the largest wilderness area in Texas. Backpacking is a great way to experience the Guadalupes, but the hard part is the lack of water. You have to carry all the water you’ll need. Day hikes are easier.
If you have the time and the legs, I recommend a hike along the 8.4-mile-round-trip Permian Reef Trail. It ascends 2,000 feet and offers much in the way of fossils. If you hike the steeper trail to Guadalupe Peak, also an 8.4-mile round-trip, you’ll see many of the same kinds of fossils. Hike the less strenuous McKittrick Canyon, 2.4 miles one way, and you’ll see travertine dams along the creek and lots of Texas madrone with bright-red berries. Keep your eyes open for all sorts of treasures.

Bigtooth maples line some of the park trails in the fall.

In the fall, usually around late October, red, orange and yellow big­tooth maples line many of the trails. Anytime of the year, a hike in the canyon reveals sotol, which is similar to some yuccas but a member of the lily family, as well as Faxon yucca, also called Spanish bayonet because of its stiff, pointy leaves. We also saw prickly pear cactus, cholla, agave, chinkapin oak and the awesome alligator juniper, named for its checkered bark.
We picnicked near the old Pratt Cabin, built in the early 1930s, and were amazed at the mostly stone building, especially the limestone roof. Volunteers open the cabin on occasion for a peek inside, so check with park officials to see if the cabin is open during your visit.
The park has 58 known mammal inhabitants, including elk, and more than 260 kinds of birds, including wild turkeys and turkey vultures. Eight species of amphibians and 44 kinds of reptiles make their home in the park, including the red-spotted toad, collared lizard and three species of horned lizards. Be cautious of tarantulas and western diamondback rattlesnakes, and give them the respect they deserve. The snakes try to avoid people, and tarantulas are slow-moving and nearsighted, and thereby easy to avoid.

Apache plume is a small deciduous to semievergreen shrub with shredded bark and white flowers that blossom in the spring and sometimes again in the fall.

Upon arriving in the park, Mike and I always walk the Pinery Trail. It’s a great little hike where visitors can learn about native plants and how ancient people used them. For example, consider rhus microphylla, also known as littleleaf sumac. It’s a shrub that grows in the area and is about 10 to 15 feet high. A member of the cashew family, in which poison ivy belongs, the plant has some surprising uses. What I didn’t know is that some people make refreshing drinks from the globular reddish-orange fruits. After the fruits are steeped in water for 30 minutes and sweetened with honey, the liquid is poured over ice to make a sort of lemonade, or more properly, rhus-ade. Hot tea brewed from the fruit is said to bring relief for sore throats.
We always visit the ruins of the Pinery or the Pine Spring Stage, located at 5,534 feet atop Guadalupe Pass. Built of local limestone in 1858, it was the highest station on the Butterfield Overland Mail Trail, which stretched from St. Louis to San Francisco. The stagecoaches that stopped here traveled an average of 5 miles an hour around the clock and averaged 120 miles a day. The Butterfield contract made semiweekly runs, covering 2,800 miles in no more than 25 days. The line was abandoned in 1859, after 11 months of service, when it was shifted to the Davis Mountain Route.

Another fun, easy trail is the Smith Spring Trail, a 2.3-mile loop that begins at Frijole Ranch, a great place to search for birds and other wildlife. Next comes Manzanita Springs, with its beautiful view of Guadalupe Peak in the background. Continue on, and you’ll enjoy Smith Spring, a beautiful oasis in lush riparian woodland. Here you’ll find ponderosa pine, Texas madrone and bigtooth maple.
Before leaving the park, be sure to drive out to the Salt Basin Dunes; at 3,640 feet, they are the lowest point in the park. Located west of the peak, these 100-foot-high gypsum dunes are some of the largest in North America. Check at the visitor center for more information and a gate key to access the area, which is 90 miles round-trip from the visitor center.

While you’re at the visitor center, enjoy the videos, exhibits and free Wi-Fi. The RV campground is located nearby on a paved surface, separate from tent campers. Vehicles longer than 55 feet are not recommended. Camping is also allowed at Dog Canyon, but it’s a long way from headquarters and has only four RV sites. Dog Canyon, with its array of maple trees, is a beautiful place to hike in the fall.
The wind can really blow in the Guadalupe Mountains. On those days we sometimes head to Carlsbad Caverns National Park, which is about 42 miles away over the border in New Mexico but in the same mountain range. Both Guadalupe and Carlsbad Caverns national parks are in the Chihuahuan Desert. (See “New Mexico’s Underground Treasure” on page 23.)
During our tours of Guadalupe Mountains National Park and Carlsbad Caverns, we experienced everything from the highest point in Texas to complete darkness in a cavern 750 feet below the earth’s surface. We come back time and again, since this area holds a special place in our hearts.

Carlsbad Caverns National Park is one of more than 1,000 World Heritage Sites around the globe. Recognized for its importance to the common heritage of all humanity, Carlsbad was designated as such in 1995 and is one of 22 World Heritage Sites in the United States.
Named a national park in 1930 (it was a national monument first), the caverns were created and bejeweled drop by tiny drop. The park consists of 46,766 acres and has more than 100 other caves in addition to the caverns.
Both of the self-guided routes through the caverns are well worth walking. The natural entrance offers a 1¼-mile paved route that descends 800 feet in 1 mile. Wear sturdy footwear!
The last time Mike and I visited, we saw many swallows flying around the natural entrance and returned in the evening to see a small group of bats fly out. We were visiting in October when most of the bats had migrated south, but we still saw a couple of hundred of them. If you’re interested in seeing thousands and thousands of bats in flight, visit between Memorial Day and mid- to late-October when the bat population is at its highest and ranger-led bat-flight programs are given 30 to 60 minutes before sunset.

In addition to the possibility of seeing swallows and bats, the natural entrance leads to such highlights as Bat Cave, Devil’s Spring, the Boneyard and Iceberg Rock, a gigantic 200,000-ton boulder that fell from the cave ceiling a long time ago.
The Big Room is a self-guided 1¼-mile paved and fairly level route that is a must-see. This free tour moseys past some famous features like the Bottomless Pit, Rock of Ages and Painted Grotto.
Several other tours are available for a fee. Kings Palace is a favorite fee tour and lasts one-and-a-half hours. The tour descends via a paved trail to the deepest portion of the cavern, dropping 830 feet beneath the desert. Note that you’ll have to descend and ascend a hill comparable to an eight-story building. Beautiful natural cave decorations include draperies, columns and soda straws, also known as tubular stalactites.

Dog Canyon
At 6,280 feet, this secluded national park campground has four RV sites and no hookups or dump station. Restrooms have sinks and flush toilets.
www.nps.gov/gumo/planyourvisit/camping.htm

Calcite crystals and mollusk fossils are found along the Guadalupe Peak Trail.

Whites City, New Mexico, is the nearest place to gas up when heading to Guadalupe Mountains National Park. Carlsbad, New Mexico, offers more in the way of amenities.