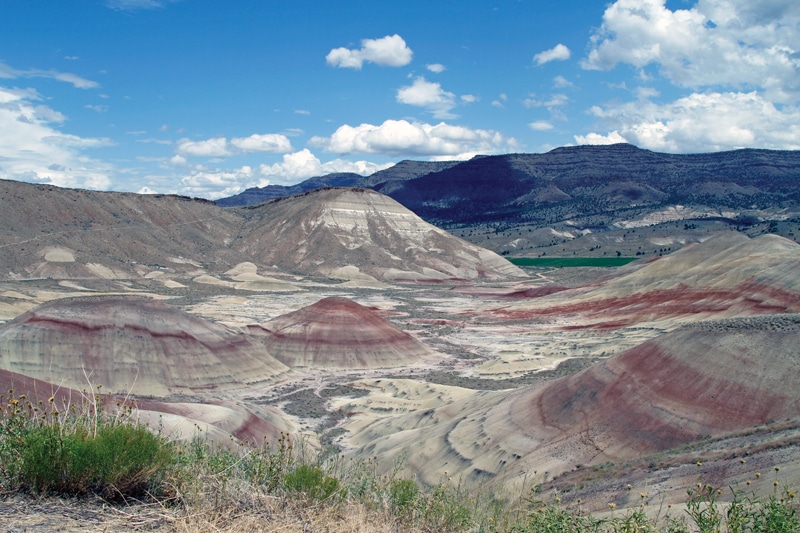 Perched on the John Day River in eastern Oregon  and a stone’s throw from the undulating Painted Hills of the John Day Fossil Beds, the John Day area is perfect for a quiet and relaxing motorhome getaway.

It’s nearly 9 p.m. on Friday when we head east on U.S. Highway 26 toward Mount Hood, a picturesque route that’s part of the Mount Hood Scenic Byway. Many people think of Oregon as rainy and green, and it is, at least the western third of the state. The other two-thirds, east of the towering Cascade Mountains, is high-desert country with miles of sagebrush and juniper-covered hills, deep gorges, trout-filled rivers and views that go on forever.

The good news about leaving Portland late is that traffic is almost nonexistent. The bad news is that we are already tired. So we head for Madras, a small high-desert town about 21â„2 hours from Portland, giving us a good start on our journey to John Day Country.

The Painted Hills Unit of the John Day Fossil Beds National Monument is a popular destination for RVers.

Despite our midsummer timing, the air is cool and becomes even cooler as we climb higher through the Mount Hood National Forest. We pass through little mountain towns like Welches and Rhododendron (named for the pink rhodies that grow wild in the forest here). We’re blessed with a full moon and as we round a bend in the highway a ghostly Mount Hood appears through the windshield, its craggy flanks still dressed in winter white. This 11,245-foot sleeping volcano, called Wy’East by local Native Americans, is one of the few places that offer year-round skiing. In fact, the U.S. Olympic Ski Team often practices here during the summer months.

U.S. Highway 26 cuts through the basalt columns of Picture Gorge.

Our motorhome churns up the steep grade, finally reaching the summit at Government Camp with an elevation of 3,888 feet. As we descend, we pass the turnoff for state Highway 35 that angles down to the verdant Hood River Valley. The valley’s “fruit loop” is a favorite destination for motor­home travelers in the fall, but that’s another trip. Tonight, our goal is the high desert.

On the mountain’s east flank, the forest changes. Cedars and Douglas firs are replaced by lofty pines. The forest floor is thick with ferns, Oregon grape and vine maples on the wetter western side. The area becomes more open, populated by less-thirsty plants like manzanita, elderberry and snowberry. Then the dense forest disappears all together, replaced by plateaus dotted with juniper and sagebrush. It has showered here recently so the air is filled with a clean, almost minty scent of sage.

It’s late when we pass through Madras in the primarily agricultural heart of central Oregon. We head south a few miles to one of our favorite RV parks, the Central Oregon KOA (formerly Madras/Culver KOA), where they offer terrific pancake breakfasts. Alas, when we pull in we’re disappointed to see a No Vacancy sign. We later learn that several events attractive to RVers, including the Good Sam Rally in Redmond and the Prineville Rodeo are happening. We could drive out to Lake Simtustus RV Park or Cove Palisades in Culver. However, both are popular and often full during the summer, and fatigue is setting in. Instead, we pull into the Madras Truck Stop at the Madras Shell station, snug the rig up against growling 18-wheelers, and fall asleep to the sound of raindrops on the roof.

Fossils in the area are a major draw for some tourists.

Onto Fossils
Next morning, the sun greets us as we pass through Prineville, a quaint town that’s quickly becoming the Silicon Valley of central Oregon with employers like Facebook liking the area’s low cost of living and great climate. We stop at the Crook County RV Park, run by the County Parks and Recreation Department, to check out its 81 shady, pull-through sites. Located right next to the county fairgrounds, the place is loaded with cowboy RVers getting ready for the horse racing event that’ll take place in a couple of hours.

Elkins Gem Stones in Prineville is a magnet for rockhounds.

At the corner of Main Street and Lynn Boulevard, colorful flowers and the Elkins Gem Stones sign grabs our attention. Central and eastern Oregon are a rock hunter’s paradise. For more than 20 years, Judy Elkins, rock expert and flower gardener has been selling gems and rocks and directing people where to find their own rock treasures.

Back on Highway 26, we stop at Ochoco Lake and the Ochoco County Park and RV Camp. This spot, snuggled under pines, doesn’t have hookups, but it does offer showers, water spigots and a boat launch. At the end of the lake where Mill Creek comes in, we’re delighted to find dozens of white pelicans, Canada geese and blue herons splashing in the grassy waterway.

Look at all the souvenirs!

We climb to an elevation of 4,720, passing through the Ochoco National Forest filled with stately ponderosa pine and white-barked aspen, and then down into the high-desert national grassland. We spot the sign for the John Day Fossil Beds National Monument Painted Hills Unit and turn onto Burnt Ranch Road, a paved two-laner with broad turns that are great for motorhomes. We come around a corner and the sight of exposed hillsides striped with rusty red, caulk white and charcoal gray against a brilliant blue sky filled with billowing thunderheads makes us suck in our collective breaths. We scramble out of the rig to take a closer look. The only sound that breaks the deep silence is the wind and the occasional call of a meadowlark.

In a short distance, the pavement becomes well-maintained gravel and you can choose to drive up to the observation point or a rest stop complete with green grass, picnic tables and restrooms. We drive up the hill to the overlook approaching and an easy, half-mile walk to a spot that looks down on 33-million-year-old ash and pumice layers of red (iron), gold (oxidized magnesium/iron and metamorphic claystone minerals) and black (manganese). We’re mesmerized by the beauty and the sense of time past.

The Thomas Condon Palentology Center, located at the Sheep Rock Unit, allows visitors to watch paleontologists and other scientists work on fossils.

Back on Highway 26, we meander through steep canyons along Rock Creek to the turnoff for the Thomas Condon Paleontology Center. This modern building houses fascinating exhibits about the area’s rich fossilized history, dating back millions of years to when the area was a tropical swamp filled with dinosaurs. Researchers and paleontologists work out of this building and large windows allow us to see into their laboratories and watch as they examine fossils they’ve recovered from nearby hills.

Following the John Day River along Highway 26, we pass through Picture Gorge where its basalt columns and uplifts of segmented rock tower above us. The gorge spills out into agricultural fields, their borders ringed with slender cattails and grasses still green from late-spring and early-summer rains.

A few miles farther, we pull into Clyde Holliday State Recreation Site and claim a spot for our motorhome under the shady cottonwoods. The park is large and perched right on the John Day River with plenty of shade, green grass and full hookups. It’s a cool, popular retreat for RVers, especially in the summer months when temperatures can soar into the high 90s. Fortunately for us, the weather stays cool and a bit cloudy as my dog and I enjoy an early evening stroll along the park’s riverside trail.

Chinese and Rails
The next morning, it’s off to the town of John Day, home to Kam Wah Chung State Heritage Site, which is one of the most interesting museums in the West. In 1887, Doc Ing Hay, a Chinese physician, came to the Wild West town of John Day in response to an ad for a doctor. A year later, businessman Lung On joined the doctor and ran a store out of the same building. The place became a doctor’s office, general store and center of the community. However, not everyone in John Day embraced the Chinese men, as evidenced by the building’s steel-reinforced front door that’s punctured by bullet holes.

When Doc Hay died in 1952, the building was simply closed up and sat untouched like a time capsule for more than 30 years. Today, the museum contains thousands of objects such as old tins, wooden boxes, foodstuffs, tobacco and more than 500 herbs Hay used in his practice. There’s even an altar that contains dried-out fruit the doctor placed there more than 60 years ago. The museum is free and open to the public for docent-led tours.

Right on Main Street, amidst false-fronted Western-style buildings, John Day also offers the Grant County Ranch and Rodeo Museum. This is still cowboy country and the museum is worth a stop to check out old photos, lariats and saddles that are icons of the area’s world-class ranching and rodeo reputation.

Another gem just a few miles up the road in Prairie City is the DeWitt Museum and Prairie City Depot of the Sumpter Valley Railway. The museum is housed in the former station of the narrow gauge rail line that ran between Prairie City and Baker City and maintains a historic look at life back at the turn of the century. The ground floor contains the station’s original waiting room, station agent’s office and baggage and freight room. Upstairs, the former station agent’s home is filled with furniture, clothing and domestic goods from the early 1900s.

Depot RV Park in Prairie City is on the grounds of the DeWitt Museum and Prairie City Depot. The campground has 20 hookup sites, a dump station and restrooms with showers.

It’s getting late when we turn west and head toward home. It’s about five hours to Portland but we can’t resist a last look at Picture Gorge. We turn at the Mascall Formation Overlook sign and head up the half-mile of paved road. We’re rewarded with a spectacular sunset that illuminates the rocks of the gorge and turns the valley grasses golden. Ah, now we’re ready to face another work week.