Wayfaring in the White Mountains

As a lifelong skier and former resident of New Hampshire who has schussed the slopes of the Granite State’s many ski areas for more than four decades, I thought I knew everything about ski areas in New Hampshire. But that was during the winter. Last summer, my 17-year-old son, Parker, and I took a road trip there, expecting to hike and play golf. After all, wasn’t that what most ski resorts offered during the summer — and little else? How wrong we were, and how surprised to find more outdoor activities than we could possibly fit into our four-day visit. 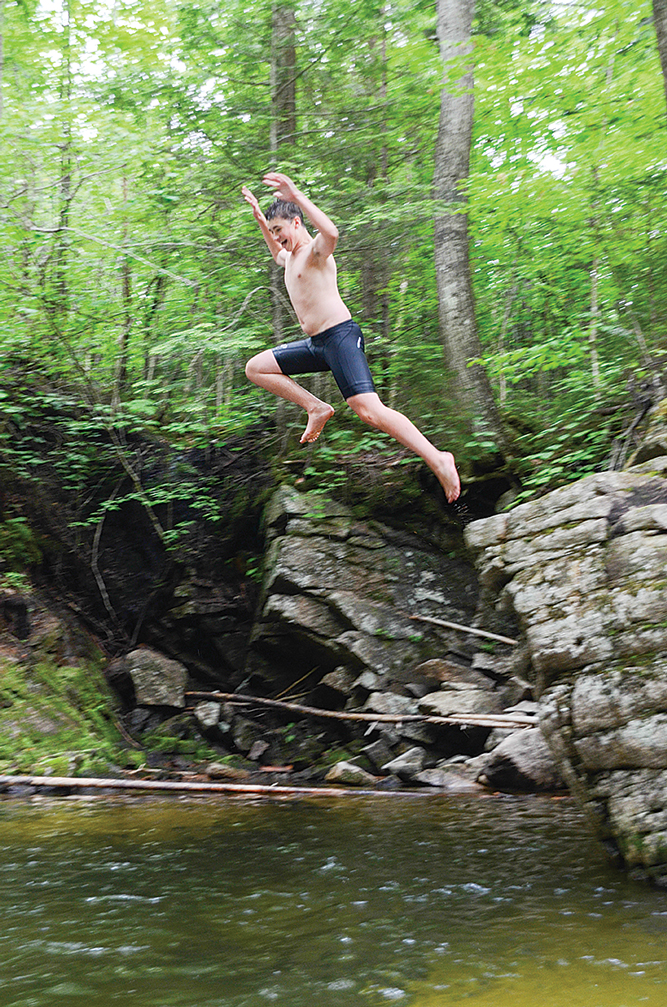 Taking the plunge into a swimming hole near the Waterville Valley’s bike trail.

Most of the ski areas in New Hampshire are in the White Mountains, within an hour of Interstate 93. We decided to cherry-pick our way north, ending up in the Mount Washington Valley near North Conway. Our first stop was Waterville Valley.
Waterville Valley was the brainchild of Tom Corcoran, an Olympic skier in the 1950s and 1960. Corcoran believed the key to a ski area’s success was offering lots of user-friendly terrain, as the bulk of the skiing population was at the beginner to intermediate level. The philosophy has carried over to the resort’s off-season offerings, including paddling on Corcoran Pond in the middle of the resort and mountain biking on its ski trails.
My son and I were both neophytes at mountain biking, but with encouragement from Waterville’s bike rental shop, we decided to give it a try. As instructed, we followed the resort’s paved bike path to the bottom of a chairlift on Snow’s Mountain near the resort’s public golf course. I got on the chairlift, and then a helpful lift attendant loaded my bike onto the chair just behind me. Parker and his bike rode a couple of chairs back. With no one to talk to, I looked around from my aerial seat. Riding a chairlift up a mountain is one of the more pleasant ways to get a view. I relaxed, letting my feet dangle, and took a few photographs.
Once at the top, we weren’t sure where to go, so we turned to a second lift attendant for advice.

“Take the Upper Snow’s Mountain Trail,” she coached us, “It’s a wide, gentle descent and there’s a great waterfall at the first bridge.”
The “trail” was really a dirt road and not intimidating. We coasted down the path, winding through a dense hardwood forest and, when we reached the bridge, we got off our bikes to look at the waterfall. It was underwhelming. There had to be more.
I spotted a footpath to our left, which we followed, leaving our bikes at the bridge. Within a few steps, we came to a taller waterfall that spilled into a deep emerald pool. The path continued down parallel to the waterfall but looked noticeably underused from that point on. Our curiosity whetted, we decided to explore further and quickly discovered several more waterfalls, each spilling into pristine pools framed by low, damp cliffs and the lush forest. We had wandered into a little-known Eden!

Parker immediately shed his shirt and shoes, and jumped into the chilly water.
“It’s cold!” he spurted as he surfaced quickly, “But it’s refreshing!”
An hour later, we finished our ride, excited by our discovery of the swimming holes and desiring another water-based adventure. After returning our bikes, we strolled the short distance through the resort’s Town Square to the edge of Corcoran Pond, thinking that renting a pedal boat or a kayak would be fun, but another watersport caught our eye: stand-up paddleboarding.
“Have you ever tried one?” I asked Parker. I had paddled an SUP on a couple of occasions, but Parker had not. It seemed the perfect spot for a first-timer. The sheltered 6½-acre pond was ripple-free and uncrowded.
Parker swung his feet from the dock onto his board, gauged his balance and stood up. After a couple of wobbles, he gently pulled the paddle through the glassy water. Within a few minutes, he looked as if he had paddled an SUP his whole life. I joined him, glad for the time on the water after our mountain bike ride. Afterward, we decided Waterville Valley should be renamed “Water-Filled Valley,” since there are more opportunities to enjoy water in this mountain resort than one would expect.

The next day, we continued north and found more water in Franconia Notch State Park. Stopping first at the Flume Gorge Visitor Center, we watched water gush from the base of Mount Liberty through the 20-foot-wide chasm, then moved on to our primary destination further into the park, Cannon Mountain. A hiker ogles Tuckerman Ravine on Mount Washington, a renowned hike-up ski slope that turns into an impressive cliff after the snow melts.

The only state-owned and -operated ski area in New Hampshire, Cannon is also famous for the former Old Man of the Mountain, a rocky protrusion that, when seen from the side, looked like the profile of an old man. Though the Old Man of the Mountain tumbled to the valley floor more than a decade ago, it remains the state’s most revered symbol, used on driver’s licenses, license plates and road signs.
“Men hang out their signs indicative of their respective trades,” said the great orator Daniel Webster, a New Hampshire native, referring to the Old Man of the Mountain. “Shoemakers hang out a gigantic shoe, jewelers a monster watch, and the dentist a gold tooth, but in the mountains of New Hampshire, God Almighty has hung out a sign to show that there He makes men.”
The 40-foot-tall, 25-foot-wide rock formation, a series of five granite ledges, seemed to hang impossibly 1,200 feet above Profile Lake. And, ultimately, that proved true, because in 2003, the Old Man crumbled, a victim of thousands of years of erosion.
I asked Parker if he remembered the Old Man, as he was only seven years old when it fell.
“Of course, Mom,” he replied, “Everyone in New Hampshire thought the apocalypse was upon us. I think it’s funny how everyone still stops here to see a pile of rocks.”
We spent the rest of the day at the beach at Echo Lake, the other small lake at the base of Cannon Mountain.
At one point, wishing to stretch our legs, we hiked the short half-mile from the beach to the top of Artist’s Bluff, a rocky outcropping above the lake. Artist’s Bluff afforded a spectacular view of the mammoth Franconia Ridge, which forms the dramatic wall on the east side of the notch and the steep Cannon Mountain ski slopes and tram on the west side. It’s an historic overlook, so named because artists used to climb to it to paint the former Profile House, a popular hotel in Franconia Notch that was built in the 1870s but destroyed by fire in 1923.

On our third day, we saw another historic landmark dating back to the late 1800s, the Mount Washington Hotel, now part of the Omni Hotels group, and its ski area, Bretton Woods. The grand white hotel, which poses at the base of its namesake mountain like an opulent Spanish castle, is famous as the location where statesmen from around the world convened in 1944 to create the World Bank and International Monetary Fund. The resort’s ski area, Bretton Woods, is New Hampshire’s largest, with 464 skiable acres. It’s also a luxurious basecamp for outdoor activities during the summer. Visitors can play golf and tennis, hike, drive or take a cog railway to the top of Mount Washington, the tallest peak in the state at 6,288 feet. There’s also good fishing, horseback riding and rock climbing, or you can take the canopy tour, a series of zip-lines from the top of the ski area to its base.
Parker and I opted for the canopy tour, which has been compared to rainforest tours in Costa Rica except that it’s through the boreal and northern mixed forests common to New Hampshire’s White Mountains. After getting fitted with a harness, a helmet and a pair of leather work gloves, we followed our two guides to the top of the zip-line course with another half-dozen visitors. We learned the basics that included how to launch from a treetop platform, how to control our speed and how to land on a distant platform. Then we started down the zip-lines for real.
It was a thrill to fly from tree to tree. Each zip-line got progressively longer and faster as we descended the mountainside. At first, I imagined myself a Bond girl escaping evil henchmen. Then, on one of the higher cables, which crossed a broad ravine, I was an eagle soaring over the forest. Sometimes we had to repel off one platform to access another one. At one point, we negotiated a shaky rope bridge between two towering pine trees. When I finally zipped to the last platform and unclipped my harness from the safety line, I felt a more invigorated and braver person.

Parker unclipped next to me. “Wow, Mom!” he beamed, “That was cool!”

The last day of our brief summer ski area tour, we planned to ride the mountain coaster at Cranmore Mountain Adventure Park in North Conway and then go horseback riding at Black Mountain in nearby Jackson, but awoke to rain. Instead, we hit several of the outlet stores in North Conway then headed south again, vowing to return soon. We never did play golf because there were just too many other things to do at New Hampshire’s ski areas during the summer.

Glen Ellis Family Campground
This full-service campground in Glen is close to the North Conway outlet stores and restaurants, and the cog railway up Mount Washington.
603-383-4567
www.glenelliscampground.com

Lost River Valley Campground
On the Lost River In North Woodstock, this campground is close to the Lost River Gorge and Boulder Caves, a series of boardwalks and natural rock formations.
800-370-5678
www.lostriver.com

Tarry Ho Campground and Cottages
This Good Sam Park is located in Twin Mountain along the Ammonoosuc River, which offers good trout fishing or floating.
603-846-1026
www.tarryho.com

Polly’s Pancake Parlor, Sugar Hill
A breakfast must that serves up pancakes with real maple syrup and has a spectacular view of Franconia Notch. The gift shop carries a large assortment of local maple products and other unique items.
www.pollyspancakeparlor.com

Shopping
The village of North Conway is a mecca for shoppers with its outlet stores, local boutiques and art galleries. Even better, New Hampshire has no sales tax.

Bavarian Chocolate Haus
Handmade chocolate, fudge and other treats to satisfy even the most discriminating sweet tooth.
www.bavarianchocolatehaus.com

White Birch Books
A classic New England bookstore carrying books by local authors (you might meet one there), other local publications, cards and gifts.
www.whitebirchbooks.com