Watching A Five-Story Building Float By 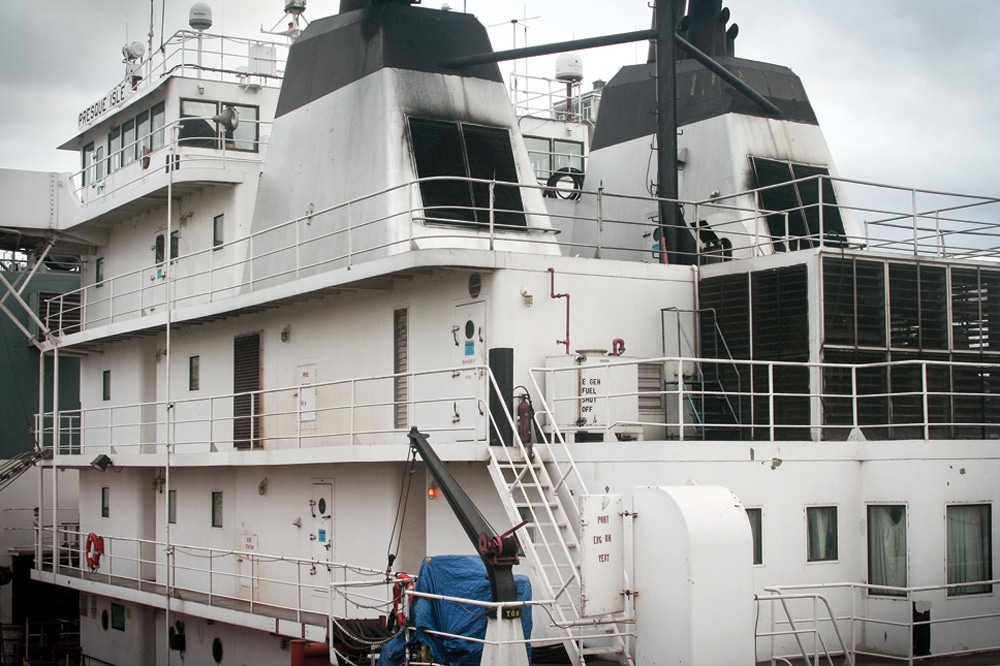 Off and on it rained, but mostly the sky just hung there, grey and depressing. That’s the way it had been all day coming up Interstate 75 from Lower Michigan. Here in Sault Ste. Marie, the Interstate climbs the bridge over the St. Marys River for its last two miles, hits the Canadian border and ends.

I’m on the business spur of I-75 heading for an RV park on the river. The Dairy Queen says, “Closed for the Season.” On the blacktop in front of the Farmer’s Market, a truck has dumped a big load of dirt-crusted sugar beets. They’re marked for deer and bear, as is a pallet of carrots packed in 45-pound bags. A sign advertises “Michigan Peaches,” under which it says “Bear Bait.” A couple crates of pumpkins round out the imagery.

It’s fall, October to be exact, and a busy time up here; it’s hunting season for both deer and bear; and it’s also intramural hockey season, played every weekend; and then comes Halloween. The tourists have gone home, but not this tourist. I’m on a mission.

Upper Michigan is a 300-mile-long peninsula, attached to a part of Wisconsin that’s squeezed between three of the Great Lakes: Superior, Huron and Michigan.

It’s impossible to exaggerate the immensity of the Great Lakes. The five lakes stretch 700 miles from top to bottom and 900 miles from east to west. They’re the largest expanse of fresh water on the planet at 94,500 square miles.

Ore boats move iron ore across the lakes from the mines in northern Minnesota.

Lake Superior is the largest and deepest lake in North America, holding 10 percent of the world’s fresh water. The water from the other four lakes could be dumped into an empty Lake Superior and there would still be room for more. Its surface is 21 feet higher than the other lakes. And that’s why I’m here.

Growing up in Duluth, at the western tip of Lake Superior, I’ve heard about the Soo Locks all my life. Using the water “elevators” here, the ore boats, as we called them, move iron ore down across the lakes from the mines up north of Duluth, Minn., to the steel mills in Cleveland, Ohio, and elsewhere.

These locks, in the St. Marys River, connect Lake Superior and Lake Huron and are the busiest in the world. In spite of ice closing them for three months every winter, a greater volume of tonnage moves through here than the Suez and the Panama canals combined. Of course, almost all of the cargo is iron ore. So tipping the scales in the Soo’s favor is not hard.

The United States has four locks on the river and Canada has one. An ore boat, let’s say a thousand-footer, called “a footer,” moves into the lock under its own power. No tugs are required as they have bow thrusters that enhance maneuverability. Only one lock, built in 1968, can handle the footers. And that’s with two-and-a-half feet to spare on either side. The locked gates are shut, valves are opened – no pumps required – and 15 minutes later the other gate opens and the ship is on his way as before, but in water at a different level.

What is great about the locks is that they are right in town next to a park. The ships move silently through here day and night. Seeing them from the street is like watching a five-story building float by. Across from the park are restaurants from which you can watch the show out the window during dinner.

Bill will be in Eastpoint, FL. To connect with Bill, email him at [email protected]