Walking Back in Time 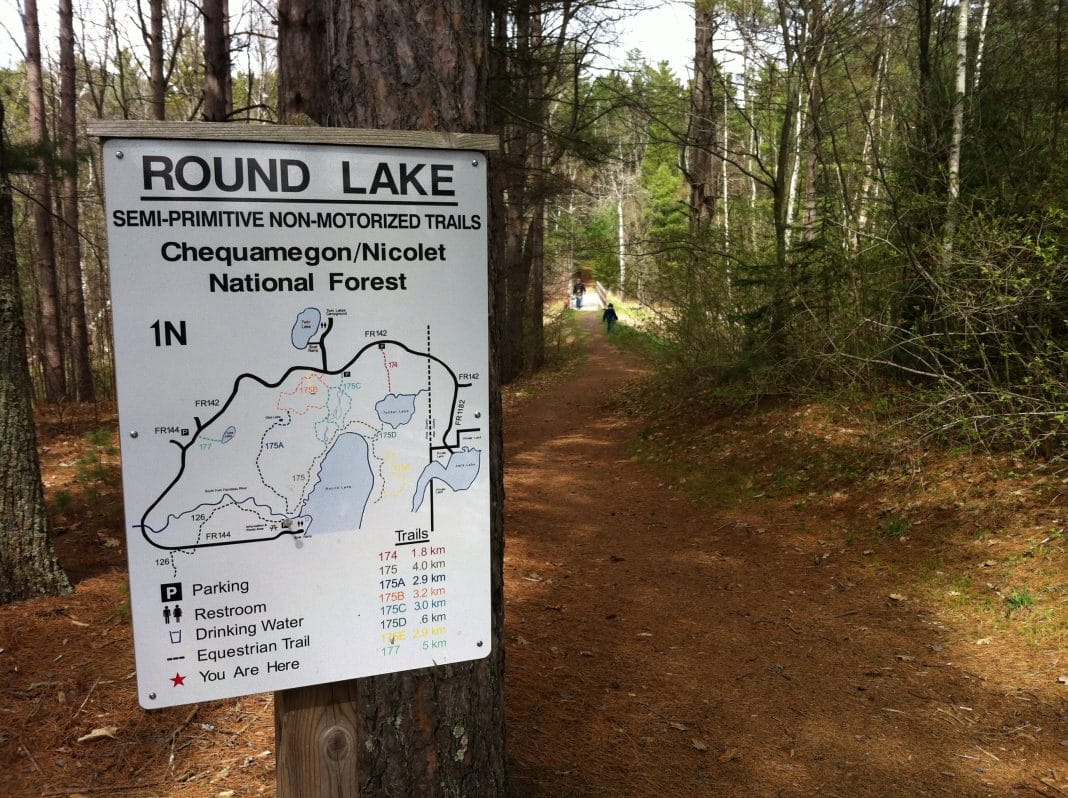 Walking down a gravel trail flanked by gigantic white pine trees showing off their fresh, bright green needles, my mom pointed toward a clearing to explain that this whole tract of land was once owned by Otto C. Doering, an officer of Sears, Roebuck & Company of Chicago back in the early 1900s. We were walking the Round Lake Logging Dam Interpretive Trail in northern Wisconsin on a perfect spring day, and I couldn’t remember the last time my mom and I had spent this much one-on-one time in the outdoors.

Wisconsin’s Round Lake Logging Dam Interpretive Trails are a simple, small network of trails that touch centuries of human life in the area.

Twenty-five minutes east of my hometown, Park Falls, Wis., Round Lake is part of the Pike Lake chain of lakes that would be a jam-packed tourist trap if it weren’t for the geographic isolation of Wisconsin’s rural Northwoods. Instead, the park is a humble little park with no buildings or services aside from signage, a foot bridge over the creek and walking trails. Even so, it’s a fascinating place with a story that encompasses thousands of years of Native American tribes, European immigration and industrialization of the early 1900s, bygone Wisconsin logging culture and, on this fine day, some tidbits about my own family’s past.

A large lake with a creek that flows out to the greater area’s interconnected river system, Round Lake was an epicenter of timber logging in the late 1800s and early 1900s. My own great-grandfather Jack Morrison was a lumberjack in this area, and they all did things the hard way: felling trees with axes and two-man saws, manhandling the great logs with cant hooks and hauling them with clydesdales. He met and married my great-grandma, Stella, who was a cook out at the logging camp.

Restored in 1995 to the way it was built in the 1870s, felled logs used to rush through these gates after spring meltwater collected in the lake.

Here at Round Lake, hardworking lumberjacks cut trees and hauled logs on ice-covered roads for storage on the frozen surface of the lake, which was dammed where a stream flows out on its western side. As the spring melt progressed, the lake swelled drastically. When the time was right and the ice was out, they would open the sluices (water channels controlled by a gate) of the wooden Round Lake Logging Dam that sent the water and cache of logs rushing down the stream in a wild flood. So-called “river rats” rode atop the logs as they surged downstream, keeping them moving to prevent dangerous log jams on their way to mills to the west. It was incredibly dangerous work.

As the 1800s ended, Wisconsin’s forests were largely stripped of the huge, old-growth forests and left barren in many places. Seeing the consequences of rapid industrialization everywhere they looked, Americans began to call for increased conservation – a large part of the drive that created state and national forests, public parks and nature preserves.

This park had some of the tallest pine trees I’ve seen anywhere – apparently the efforts of kids like my mom back in the 1970s paid off on a healthy forest.

Even after decades of large-scale logging, northern Wisconsin was still beautiful, and settlers moved in to take advantage of the isolation, concentration of lakes, peaceful surroundings and budding industry in the area. Otto C. Doering, a wealthy businessman from Chicago, brought his family to the area to camp in 1902 and, by 1915, had purchased 2,946 acres along the shores of Round Lake to build an Adirondack-style vacation retreat for his family. At its peak, the Doering Tract included a kitchen, dining lodge, caretaker’s house, barns, storage buildings and a tennis court – all built with logs and stone.

The Doerings eventually sold their land to the USDA Forest Service in the 1960s, and the many buildings were sold and dismantled to return Round Lake to its previous, natural state. Walking the trails, my mom pointed out overgrown stone foundations still clinging to life in a few spots around the lake.

Beyond one foundation, with remnants of a circular stone turret still evident, we came upon the wooden logging dam that was originally built somewhere around 1876. In 1995, through private donations (including my parents!) and assistance from the Chequamegon-Nicolet National Forests, the Friends of the Round Lake Logging Dam, the Price County Historical Society and numerous volunteers, the dam was restored to its original condition. It was a huge project that dismantled, recorded and re-used as many of the original timbers as possible. Today, it’s listed on the National Register of Historic Places and is the only surviving logging dam in the Upper Midwest. Park signs and handouts do a great job of explaining the area’s many intersecting histories, and made for a fascinating day hike. For a great read about early logging history in Wisconsin, check out “Caulked Boots & Cant Hooks.”

Before heading back to Minneapolis, I stopped at my friend Cliff’s cabin where we picked wild leeks that carpet Wisconsin’s forest floor every spring. They were delicious cooked up with potatoes.

My mom, Terri, knew about this area from her job as part of the Youth Conservation Corps in 1975 when she was 17 years old. The YCC, which is still working to repair weathered national parks, crumbling historic buildings and build trails, as well as combating invasive plant species, helped build and brush out the hiking trails, prune the trees and turn the Doering Tract into a lasting park for generations to explore. For the record, the trees have grown up very nicely – including some of the largest white pine trees I’ve ever seen, Wisconsin’s version of the Redwood.

Hearing about my mom’s enjoyable childhood work and nearby family vacations gave me a sense of connection I would’ve never expected when I was eating my morning cereal. Even though I grew up close by, I had never crawled around on the Round Lake Logging Dam or walked the surrounding trails. Now I feel a family bond to this area that stretches across four generations of my family. Even better, it was rare quality time with my mom where she did most of the talking and I, very happily, just walked, enjoyed the sights and listened.