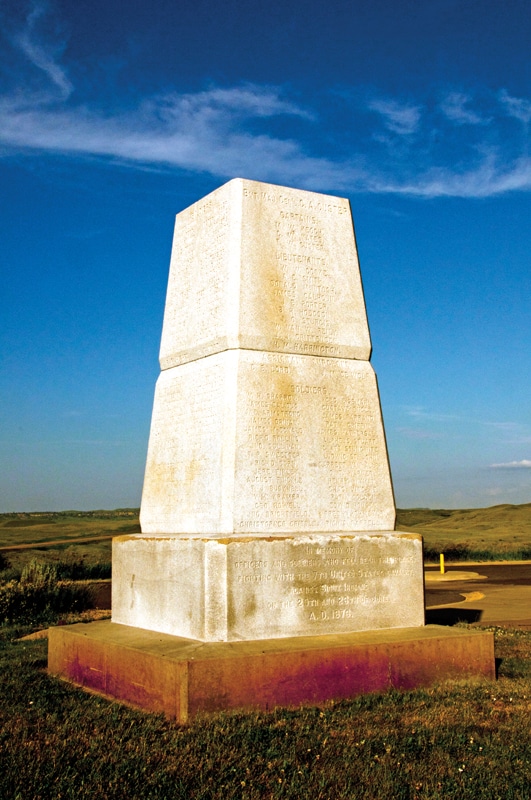 As a young helicopter pilot in a 7th Calvary unit 41 years ago, my comrades and I often bellowed this song while blowing off steam after a day of flying in Vietnam. While this is not the traditional Irish marching song, “Garryowen” (Gaelic for Owen’s Garden), used in 1876 by the 7th Cavalry and today by the 1st Cavalry Division at Fort Hood, Texas, it was the one we adopted as our own in the jungles of southeastern Asia. It is believed that “The Ballad of Sergeant Flynn” was written some time after the Battle of the Little Bighorn.

Little did I know then that I would one day walk the ground where the legends of the 7th Cavalry and its bombastic leader, Lt. Col. George Armstrong Custer took root on a sweltering late June day in 1876 when he tangled with Sitting Bull.

Fast forward 40 years and I realize my wife, Jennifer, mother, Betty, and I will be driving right past the battlefield in our motor­home. Like me, Mother had always wanted to see this historic site so stopping for few days was a must.

We chose a Good Sam park, the 7th Ranch RV Camp, in the community of Garryowen, Mont., as our base. All of the RV sites at 7th Ranch are pull-throughs, and most have full hookups. We particularly enjoyed the free ice cream bars provided on a hot day when we checked in at the campground.

The town of Garryowen is located on the actual ground where Maj. Marcus Reno, leading one of Custer’s battalions, opened the battle alongside the Little Bighorn River. The town itself is not much more than a few houses, a gas station, restaurant, lodge and the RV park. It does, however, boast a notable museum. Custer Battlefield Museum is filled with artifacts from the Battle of the Little Bighorn, including the revolver carried by Custer’s brother Tom (inscribed with his initials) and the rusted remains of a rare Bulldog revolver that may have been carried by Custer himself, though the heritage of the latter cannot be definitively proven. Only its rarity, the knowledge that Custer carried a Bulldog and finding it in the possession of a local resident within 50 miles of the battlefield suggest this might have been Custer’s revolver.

It’s about a 10-minute drive from Garryowen to the entrance of Little Bighorn Battlefield National Monument. The visitor center offers a 17-minute movie, a small museum and an excellent selection of books about the battle in its gift shop. A free map to the battlefield is provided, along with driving directions along the ridge overlooking the valley of the Little Bighorn. This ridge is, more or less, the route Custer and the 210 men under his direct command followed to what is today known as Last Stand Hill, a short stroll uphill from the visitor center.

The road along the ridge is open to the public, but is not recommended for big rigs. You’ll want to drive your dinghy unless you’re operating a small Class C or Class B motorhome. Be aware that much of the land outside park boundaries is private, specifically Crow Reservation lands, and signs are posted noting areas that are off limits to visitors.

To best understand how the battle developed, drive directly to the far end of the road – about 4.5 miles – and work your way back slowly, pausing to read all of the signs at the multitude of turnouts along the route. From these vantage points you will see the terrain much as Custer saw it during the final hours of his life.

From the end of the road you can see the Crow’s Nest about 12 miles to the east, the mountain from where Custer first observed signs of a large Native American encampment on the banks of the Little Bighorn early in the morning of June 25, 1876. That’s when things began to go wrong for the 7th Cavalry.

The Battle of the Little Bighorn

Custer’s telescope showed him little more than a large cloud of dust. Better optics in the form of a pair of binoculars he borrowed from one of his lieutenants – and failed to return – showed a little more, a moving mass that Custer’s scouts assured him were thousands of ponies belonging to the largest gathering of Plains Indians that any of them had ever seen. While Custer accepted that it was a large encampment, he discounted his scouts telling him just how big, even when one tried to tell him the 7th Cavalry did not have enough bullets for all the warriors in front of them. Blinded by dreams of greater glory, Custer figured his men could handle the thousand or so Sioux and Cheyenne he expected to encounter. In reality there were at least 7,000 warriors present at the Little Big Horn, outnumbering Custer’s 647-man force by a factor of more than 10 to 1. At least one historian’s estimate puts the number of Native Americans at more than 12,000. It was one of their last armed efforts to preserve their way of life.

Custer’s well-earned reputation for bravery as a cavalry leader rested largely on his eagerness to lead ferocious charges of mounted men firing revolvers and swinging sabres whenever a battle presented itself. Brash and impetuous, his willingness to fight anytime, anywhere (and a phenomenon known as Custer’s luck) served him well until that summer day in 1876. When Custer first glimpsed the ponies, Sitting Bull, the Sioux’s best strategist, had already outthought him, and Crazy Horse, the Sioux’s best tactician, would shortly out-fight him.

Resolving to fight, Custer led his men straight toward the encampment on the Little Bighorn. As they approached the river, they discovered the high ground to the east of the north-flowing river, which appeared to be relatively even terrain from a distance, was filled with ravines and other folds collectively capable of hiding thousands of warriors as well as preventing Custer from seeing the entire village complex. Thus he continued to discount the repeated warnings from his scouts.

Custer then made a classic military blunder: he divided his men in the face of a superior force. Capt. Frederick Benteen, with a couple companies of troopers and the pack trains with extra ammunition, were left at what is today the end of the road into the battlefield and is now known as the Benteen-Reno Battlefield. The balance of the force was then divided between Custer and Reno. Reno’s assignment was to get to the valley floor, cross the Little Bighorn River and engage the enemy. Custer, meanwhile, would take those directly under his command on a sweeping flanking movement, remaining in the hills overlooking the river until he could swoop down and finish the battle.

Reno moved his force down to the river by following one of the ravines, got across, and began trotting toward the encampment. According to some of the Sioux and Cheyenne survivors of the battle, victory was within Reno’s grasp had he charged directly into the village, which is almost certainly what Custer would have done and what Custer probably expected Reno to do. The Sioux and Cheyenne warriors at that moment were mostly absent, rounding up horses to ride into battle, and Reno’s column could have raged through a lightly defended village occupied mostly by women and children, creating mass confusion and putting the people to flight.

Reno, however, had been drinking whiskey for most of the preceding 24 hours and was still slugging down whisky from a flask he carried into battle. Seeing the sheer size of the encampment to his immediate front, he panicked, dismounted his troopers, and formed a skirmish line, which immediately moved his command from offense to defense. The location of this skirmish line is approximately the site of today’s town of Garryowen.

Within 20 minutes, mounted Chey-enne warriors began repeatedly charging Reno and his men. Reno panicked again, jumped on his horse and lit out for the river crossing. Those he left behind realized they now had to retreat and began moving toward the river. It was more of a rout than an organized retreat. Had Custer charged down from the hills at this moment, he might still have gained the upper hand. He did not, probably because he could not see what was happening. He instead moved farther away from the desperate efforts of Reno’s men to get back across the river and up to Benteen’s position. Most of Reno’s men would survive, as would most of Benteen’s. Custer’s men, however, were never seen alive again.

No one knows for sure what orders Custer gave as he followed the ridges above the river. Battlefield remains of equipment, shell casings, spent bullets and bodies suggest Custer further split the force of 210 men he was personally leading. Capt. Myles Keogh appears to have commanded two or three companies sent to protect Custer’s right flank, a series of ravines that provided cover for hundreds of warriors. Keogh’s troopers were likely the first group to perish to the last man, save one who made it several hundred yards to Custer’s position only to survive a few more minutes. The only survivor was Keogh’s horse, Comanche, wounded many times but destined to live and become a 7th Cavalry mascot for more than a decade.

Custer pushed farther along the ridges to Last Stand Hill. Here he and the remainder of his direct command died after the warriors that chased Reno back to Benteen’s position regrouped and attacked Custer’s men.

As you drive along the ridges above Little Bighorn River, white gravestones mark where soldiers fell during the battle. Those who could be identified are named; many stones simply list unknown troopers. Occasionally there are red headstones, which mark where Native American remains were found. There are very few of the latter because the Native Americans removed most of their dead. The three areas with the largest number of white headstones are the Benteen-Reno Battlefield, Keogh’s last position and Last Stand Hill, though there are scatterings of headstones throughout the battlefield area. Though men died where Reno formed his skirmish line, there are no gravestones on what is now private land.

Last Stand Hill holds the greatest concentration of white gravestones in a limited area, and includes Custer, his brother Tom (winner of two Congressional Medals of Honor during the Civil War) and at least one other relative. A large granite monument overlooks the fenced field of gravestones. Most of the soldiers were buried in what is now a national cemetery in the park, although Custer’s remains were later disinterred and reburied at the U.S. Military Academy at West Point, N.Y.

Below the summit of Last Stand Hill on the side away from the river and the gravestones is a stunning circular monument to the Native Americans who fought at the Little Bighorn. Walking through this memorial you realize the size of the force faced by the 7th Cavalry. Not only were the Sioux present in all their various tribes, they were joined by members of many tribes including the Cheyenne and Arapahoe, among others.

Brash and impetuous to the end, Custer ignored the warnings of his scouts and died leading one charge too many.

Each June, the nearby town of Hardin stages Little Bighorn Days, a four-day event that features a reenactment of the Battle of the Little Bighorn. This year’s event takes place June 20-24.