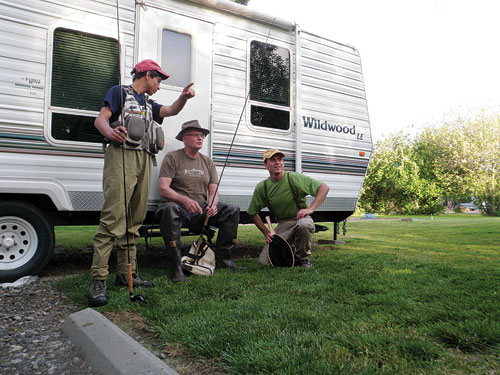 Travel, it is sometimes said, consists simply of getting from point A to point B. However, for RVers the equation is never quite that simple. Connecting the points might be a matter of efficiency, getting from one place to the next the quickest way possible. Others might take the scenic route, traveling along the course that maximizes the visual delights of the journey.

So what happens when point A and point B represent two of the most popular national parks in the Rocky Mountains and the multiple routes connecting them pass through a state known for its stunning scenery and seemingly limitless possibilities for outdoor recreation?

Each season, thousands of travelers face this delightful dilemma as they seek to connect Glacier National Park in Montana’s northwest corner with Yellowstone National Park in the southwest. Bustling hurriedly between these two crown jewels of the national park system seems shortsighted, and since fishing is one of the activities folks most often wed with RVing, how about an itinerary focused on angling? Early September is a great time to make the trip, because it brings cooler nights and mild, sunny days to the area, conditions that are invigorating to anglers and trout alike.

Famous for its thousands of miles of heralded trout streams and pristine lakes, Montana beckons anglers from around the globe. Beginning in Glacier and ending in Yellowstone, RVers have literally a hundred or more options for excellent angling in between. Do your own sleuthing if you like, but here’s our suggestion for a Montana trout route that includes some of the state’s most famous trout waters.

Local guides can go a long way to find the perfect fishing spot.

Before leaving Glacier National Park, take a hike to sample some of the area trout hangouts. Known primarily for its lofty mountain vistas, invigorating hiking trails and abundant wildlife, trout fishing is an often overlooked but highly appealing aspect of the Glacier experience. Many of Glacier’s hiking trails lead to remote streams and lakes that are excellent places to tangle with several different species of trout.

One of the most popular hiking destinations in the park, Hidden Lake lies in a picturesque cirque draped in emerald vegetation, shady stands of evergreens and snowfields that ebb and grow with the seasons. Several mountain peaks, like stony sentinels on battle stations, rise above the lake, creating a postcard-perfect setting.

Fly fishing in the shallow glacial rivers is a great way to get into nature.

Hidden Lake lies just three miles from the visitors’ center at the top of Logan Pass. The first 1.5 miles of the hike wind along a series of boardwalks to the summit of Hidden Lake Pass, an invigorating hike through fields of wildflowers. At the crest of the pass, it’s easy to spot mountain goats and bighorn sheep, especially if you trek in the early morning. From Hidden Lake Pass, the trail skirts along the flank of Mount Clements before descending a fairly steep 700 feet to the lake.

If the prospect of tangling with big, wild cutthroat trout sets your heart to throbbing, you’ve come to the right place. Hidden Lake boasts a healthy population of cutthroats, thick, vigorous fish that may press the scale to 3 pounds and beyond. Like cutthroats in other backcountry lakes, these crimson-jawed hunters prowl near structures along the shorelines, ever on the lookout for an easy meal.

Fish aren’t the only wildlife in Montana.

While the trail to Hidden Lake actually crosses the outlet and continues on the south side of the lake, I’ve found very good fishing on the north side along the steep slopes of scree that plunge into the lake. No matter which side you choose, be prepared to move around in search of fish, as the cutthroats often fin together in small pods. Rising trout make this job easier, but the pristine water of the lake makes it possible to easily spot fish from elevated vantage points unless the surface becomes choppy in the wind. Fly-fishers find good dry-fly action on Hidden Lake, with a light Elk Hair Caddis being a consistently productive pattern. Anglers with spinning gear are advised to throw small spoons and spinners in colors of silver and gold.

Flowing along the west side of Glacier National Park, the North Fork of the Flathead River offers easy access for wading anglers from roads in and out of the park. On the lower portion of the river, floating is the preferred method of reaching the river’s beautiful cutthroat trout. One hot August morning, my son and I floated the river with a guide from Wild River Adventures. Though the fishing was tough in the heat, we still managed to catch around a dozen trout. What impressed me even more than the fishing was the scenic beauty of the river and the abundant wildlife we spotted, including several majestic bald eagles.

The lower portion of the North Fork of the Flathead flows over cobbled stones, sometimes swirling its way along imposing cliffs that drop precipitously to the river from mountainsides decked in stately evergreens. Even more amazing than the surroundings is the clarity of the water. Even where the river runs deep and strong, an observant angler can clearly see the bottom and the torpedo-like forms of resting trout.

From Glacier country, it’s a scenic, three-hour drive down Highway 93 to Interstate 90, then a short jaunt east to the Missoula area, home of several winsome Montana trout streams. Not long ago, this portion of Highway 93 had a reputation as a narrow, congested roadway, ill-fit for relaxing travel in a car, let alone an RV. However, the route now boasts passing lanes over two short passes and in other areas, making it friendly to trailer-towing units and motor­homes alike.

The Clark Fork River roughly parallels the interstate for 90 miles to the east and a similar distance to the west of Missoula. The aquatic residence of brown, rainbow and cutthroat trout, the Clark Fork offers fine fishing for trout that may stretch the tape to 20 inches and weigh several pounds. Lower segments of the Clark Fork are most easily accessed by boat, with several reputable fishing-guide services in the Missoula area offering float trips. These excursions are a fantastic way to experience the grand setting of the broad river, while leaving the logistics and rowing chores to a guide.

East from Missoula, the Clark Fork is a more modest stream, more conducive to wading than floating. Anglers find good success fooling the abundant brown trout with both spinning and fly gear. Dry-fly action often heats up in the evening, while large streamers can be effectively fished in the river’s yawning holes and deep runs during the day. I’ve caught Clark Fork River brown trout on a variety of spinning tackle, from black jigs sporting a brown twister-tail to midsize red and white spinners.

From the tumbling headwaters to its union with the Clark Fork River, Rock Creek is an outdoor lover’s paradise. Abundant wildlife and stunning scenery make this remarkably large “creek” a perennial favorite with western Montana natives.

Despite its numerous other attractions, though, most people come to Rock Creek to fish. From the Rock Creek exit on I-90 (20 miles east of Missoula) to its headwaters, the creek boasts at least 50 miles of productive water, most of which lie within sight of the improved (sort of) road that parallels Rock Creek’s canyon and meadowlands.

In keeping with the novelty of its other features, the creek’s fishery is intriguing as well. On most Montana waters, the angler has some idea of what’s been hooked when the bait is taken. Not so on Rock Creek. While fishing early one fall, I landed brown, rainbow, cutthroat and bull trout all within the space of two miles on this eclectic creek.

For the experienced fly-fisher, though, Rock Creek’s streambed offers diversity and challenge rivaled by few destinations in the nation. Pristine water nourishes numerous aquatic critters as well as the fish that consume them. The muddling myriad insects forces the angler to identify and imitate the trout’s meal of choice in a realistic fashion. 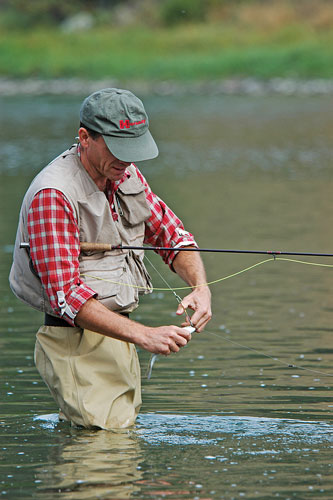 A fisherman unhooks his catch on Rock Creek.

Although there are other hatches throughout the summer, Rock Creek’s salmonfly hatch is perhaps the most dramatic. The hatch usually begins about the first of June at the mouth of the creek and then moves upward. Later in the summer, fly casters find action with caddis imitations, pale morning duns and hoppers.

For fly and spin casters, early fall on Rock Creek can be superb. After Labor Day, summer crowds disappear and many locals turn their attention to other recreational pursuits, such as bird hunting. Falling water temperatures raise trout activity, triggering some of the year’s hottest action. Small, brightly colored spinners (gold and silver) take plenty fall fish, as do small spoons.

From the Missoula area, it’s about a five-hour trek by RV to the West Yellowstone vicinity, an ideal base camp for fishing two of Montana’s finest high-country trout streams. Motoring east on I-90, a fairly steep, extended pass awaits you just east of Butte, an ideal spot to fuel up, check the brakes and take a break to explore the town’s intriguing mining history. After descending Homestake Pass, just east of Butte, it’s about 20 miles to Cardwell and time to exit the interstate for Highway 2, which connects with Highway 287, a superbly scenic route to the West Yellowstone area. Stop for lunch or a break in Ennis, a small, rural community nestled in a broad river valley with views of the jutting peaks of the Madison Range.

Leaving Ennis, Highway 287 soon parallels the Madison River, perhaps the Treasure State’s best-known trout stream. Fishing along this segment of the river is superb for rainbow and brown trout, with float-fishing the most practical plan of attack. 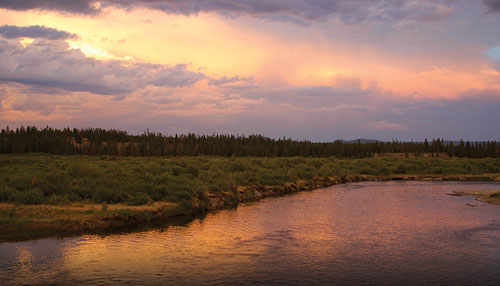 Even if the fish aren’t biting, you can’t beat the view.

Once situated in the West Yellowstone area, either at a private, full-service RV site or one of the public campgrounds (see sidebar above), you’re perched in an ideal place to fish the upper portion of the Madison River, or pop north over a short mountain pass on Highway 191 to tease the trout in the Gallatin River. Both of these streams were named by the Lewis and Clark Expedition in 1805, the Gallatin for then Secretary of the Treasury and the Madison for the Secretary of State.

Access to the upper portions of both streams is easy via vast tracts of National Forest lands. Cutthroat, rainbow and brown trout abound in the streams, along with numerous mountain whitefish that, along with the cutthroats, represent two of the common native fish in the area. Standard fly-fishing techniques for trout work well on both of these streams. Novice anglers or those visiting from other parts of the country might want to hire a local guide from West Yellowstone or Big Sky (north on Highway 191) for assistance.

After a few days on the Madison and Gallatin, who knows where you’ll go. Maybe home, maybe on another adventure of your own creation. There are hundreds of possible fishing itineraries in the Treasure State. No matter which you choose, you’ll find many exquisitely memorable moments on a Montana trout route.