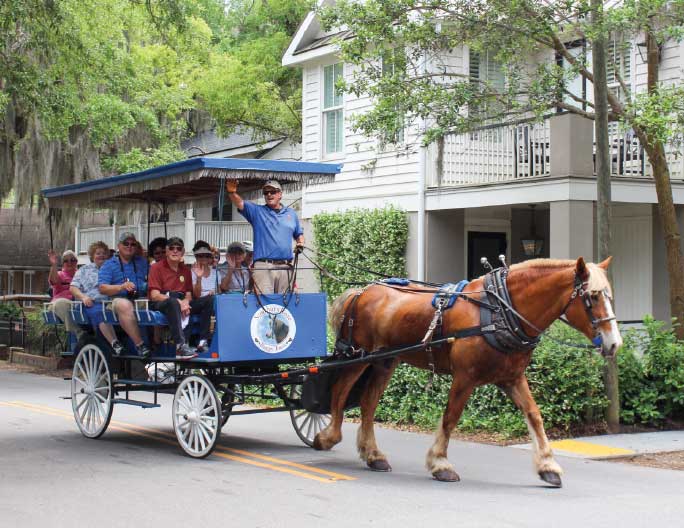 Picturesque Beaufort, South Carolina, is often overshadowed by its bigger sister cities – Charleston to the north and Savannah, Georgia, to the south – but you’ll be pleased to find the same “old Southern” charm as in those more well-known destinations. You’ll drive along streets lined with moss-draped oak trees, past antebellum homes, historic churches, small shops and restaurants, and find yourself glancing up just in time to see the waterfront just ahead.

Beaufort is the second-oldest city in South Carolina, although there’s some debate that the Spanish, not the English, got there first. Still, this coastal community has played a significant role throughout America’s history.

You can get a sense of some of that history through a variety of tours. Narrated walking tours, van tours and horse-drawn carriage tours are available throughout the Beaufort Historic District. A carriage tour fits well with the atmosphere, as riders move slowly past many of the town’s older homes and structures. It’s interesting to note that Beaufort has the highest concentration of antebellum homes in South Carolina. This area suffered less damage than other Southern cities because the Union occupied the town during much of the Civil War.

A horse-drawn carriage tour is a great way for visitors to see many of the town’s older homes and structures.
Photo: Pam Windsor

“There was a battle that took place here November 7, 1861, called the Battle of Port Royal,” explained Nichole Myers with the Sea Island Carriage Co. “And, during that battle, the people of Beaufort left town. The Northerners called it ‘The Great Skedaddle’ of the South. When the Union troops got here, they found a ghost town, so they occupied it, and used many of the homes and churches as hospitals.”

Union forces set up headquarters at what’s known as the John Mark Verdier House. The home was once owned by a wealthy planter, and Marquis de Lafayette stayed here during his U.S. tour in 1825. Verdier has an interesting story. He started off as an apprentice in a mercantile store, worked his way up, eventually bought the store and then inherited land from his father. Verdier planted indigo, which did well until the Revolutionary War, when England no longer wanted it. Then he switched to Sea Island cotton, which brought him success until it was all wiped out by a hurricane in 1810.

“Until then, he was a very wealthy man,” explained Sandy Patterson, head docent at the home. “But, unfortunately, he over-extended himself. He ended up buying and speculating on too much property, and became property rich and cash poor. He ended up in debtor’s prison in Charleston.”

You may recognize this iconic tree from its appearance in the film “Forrest Gump.” In the movie, Forrest teaches Jenny to dangle from its limbs.

Verdier was able to keep the home in the family by transferring it to his son’s name. Today, this stately Federalist building downtown serves as a museum and is open for tours.
Beaufort has had its share of well-known movies shot here over the years. They include “The Great Santini,” “The Big Chill” and “Forrest Gump,” to name a few. Locals can point out some of the homes where people like Sally Field stayed while in town, as well as spots where scenes from some of those films were shot.

The late writer Pat Conroy, who wrote “The Great Santini,” moved to Beaufort with his family when he was 15 years old. Beaufort is home to a Marine Corps Air Station and Conroy’s father, a Marine Corps fighter pilot – the subject of “The Great Santini” – was stationed there. Conroy always considered Beaufort his hometown and was living there when he died in early 2016. He is remembered fondly by many who knew him well.

Getting There:
Beaufort (pronounced BYOO-fert, and not to be confused with North Carolina’s Beaufort) is on Port Royal Island. Take Interstate 95 to U.S. Highway 17, then U.S. Highway 21 south.

Nearby Parris Island is one of the world’s most visited military facilities. Some 20,000 Marine recruits come for basic training every year. They graduate at one of 35 graduation ceremonies throughout the year that are always held on Friday. Those events are open to the public. The Parris Island Museum is also free and open to the public. The museum covers local and regional history, as well as Marine Corps history.

“The museum showcases the long and rich legacy of the Marine Corps,” noted Captain Greg Carroll. “It stands as a magnificent monument to Marines of the past, as well as a source of inspiration for Marines of the future.”

New exhibits highlight the history of recruit training and the instructors who make that training possible.

To gain access to Parris Island, visitors need only a valid U.S. government-issued photo ID card, proof of insurance and their vehicle registration.

An RV park on Parris Island is available for active duty, retired military and Department of Defense card holders . Call 843-228-7472 for reservations.

Beaufort’s The Parish Church of St. Helena was established in 1712 and is one of the oldest churches in the United States. The original church was built in 1724 and has expanded over the years. It was the parish church of Thomas Heyward Jr., one of the signers of the Declaration of Independence. When Union troops later took over the city, the second floor sanctuary was used as a hospital. 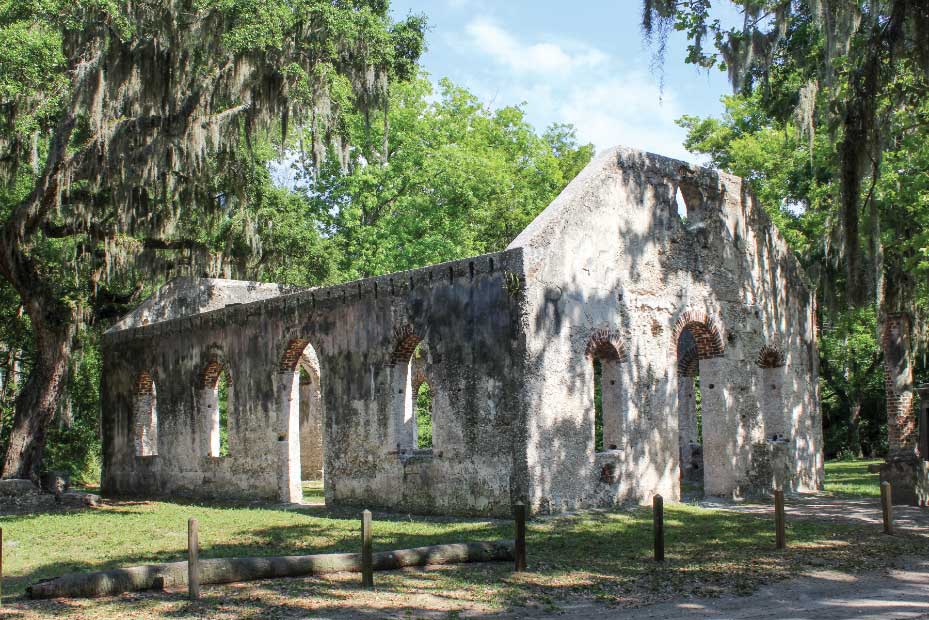 The Chapel of Eaves was constructed in 1740 for planters who lived too far away to attend regular services at The Parish Church of St. Helena.

“There were many buildings in Beaufort used as hospitals,” said church docent Sally Miller. She added that Confederate and Union soldiers are buried here, as well as many others who served in times of war. “There’s someone buried here from every war the United States has ever fought in. There are also two British soldiers who died in the Revolutionary War and are buried right up near the front gate.”

Regular parishioners are also buried here, one of them in an interesting brick mausoleum.
“It was built for a doctor who heard that sometimes people are buried alive,” Miller said. “He was afraid that might happen to him, so he wanted to be buried with a pickaxe, a jug of water and a loaf of bread.” And what happened after he died? “To my knowledge, he was never seen again.”

The Beaufort National Cemetery was established by President Abraham Lincoln in 1863 as a final resting place for Union and Confederate soldiers. Today it is open for burials of members of all of the armed services. More than 14,000 people are buried here.

After the end of the Civil War, many former slaves headed to Beaufort and the surrounding Sea Islands to live. The area has a rich African-American heritage and offers an opportunity to learn about the Gullah culture that still exists here. The Penn Center, a 50-acre historic campus on nearby St. Helena Island, was one of the country’s first schools for formerly enslaved individuals.

Not far from Penn Center, you’ll see the ruins of the Chapel of Eaves. While St. Helena was the parish church, this chapel was built in 1740 for planters who lived too far away to attend regular services. It was constructed with a material very common in this area at the time.

“They constructed a building material called tabby,” explained Jennifer Rhodes with the Visitors Center. “It was made of crushed oysters, sand and limestone, and they used that to build many of the walls near the water and other things downtown.”

During your visit make sure to try some of the famous Lowcountry dishes you may have heard about, from shrimp and grits to she-crab soup to Frogmore stew (also known as Lowcountry boil or Beaufort stew). Frogmore stew contains shrimp, sausage, corn, onion and potatoes, and is definitely worth sampling. Food is a highlight here, and local restaurants feature a number of those dishes. Beaufort also hosts two food festivals: A Taste of Beaufort (May 4-5), and the Beaufort Shrimp Festival (October 5-6). 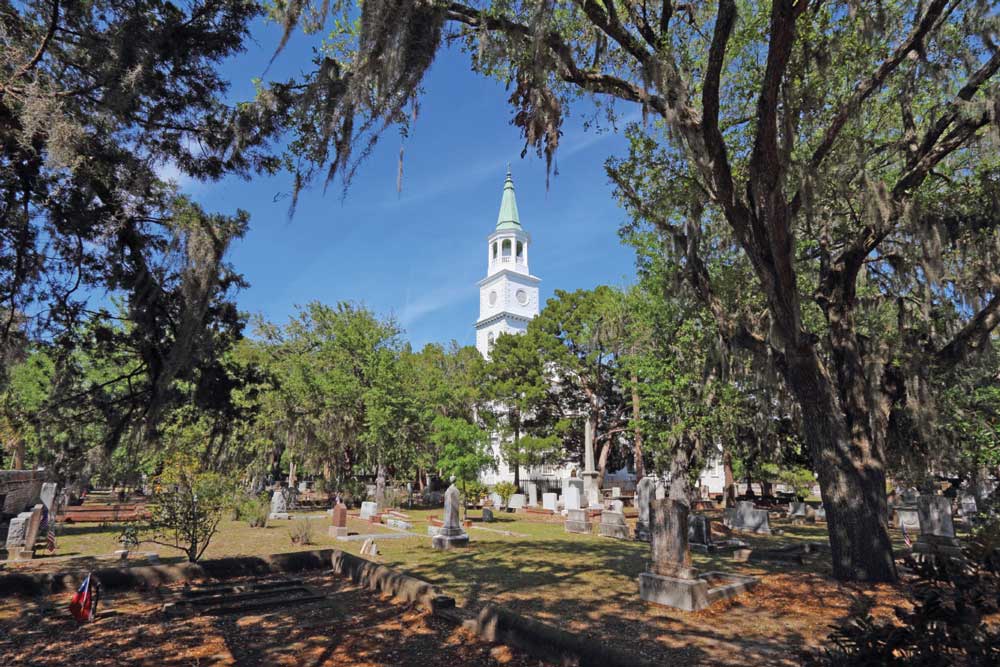 The Parish Church of St. Helena was established in 1712 as a colonial parish of the Church of England, and today is one of the oldest churches in the U.S. The original church was built on the present site in 1724. The church appears now as it did in 1842, after its final enlargement.

Motorhome owner Judy Hendrich and her family have been coming to the park for years. She and her husband, Bill, travel from Maryville, Tennessee, at least twice a year, and are often joined by children and grandchildren. She comes for the water.

“I love the ocean. It’s a huge beach and it’s not crowded. You go out there and see maybe six or eight people at a time.”

While the beach might not be crowded, the campground is often booked, so make reservations as far in advance as possible (there is a two-night minimum).

Another nearby campground, Tuck in the Wood, is located on St. Helena Island, not far from Beaufort or Hunting Island. It, too, offers a serene, natural setting, although there’s no beach access. Other options for places to stay include Hilton Head, which is about 40 miles from Beaufort.

Beaufort offers a warm, welcoming, laid-back atmosphere that’s great for a lengthy stay or as a stop for a few days on the way to somewhere else. 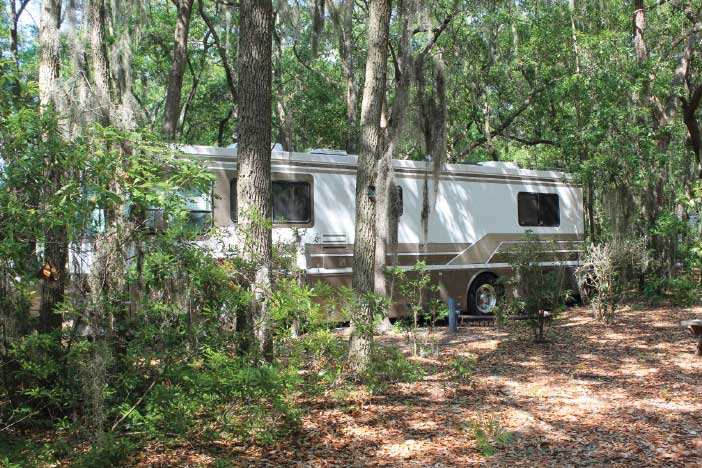 Some of the RV sites at Hunting Island State Park can accommodate motorhomes up to 40 feet in length. 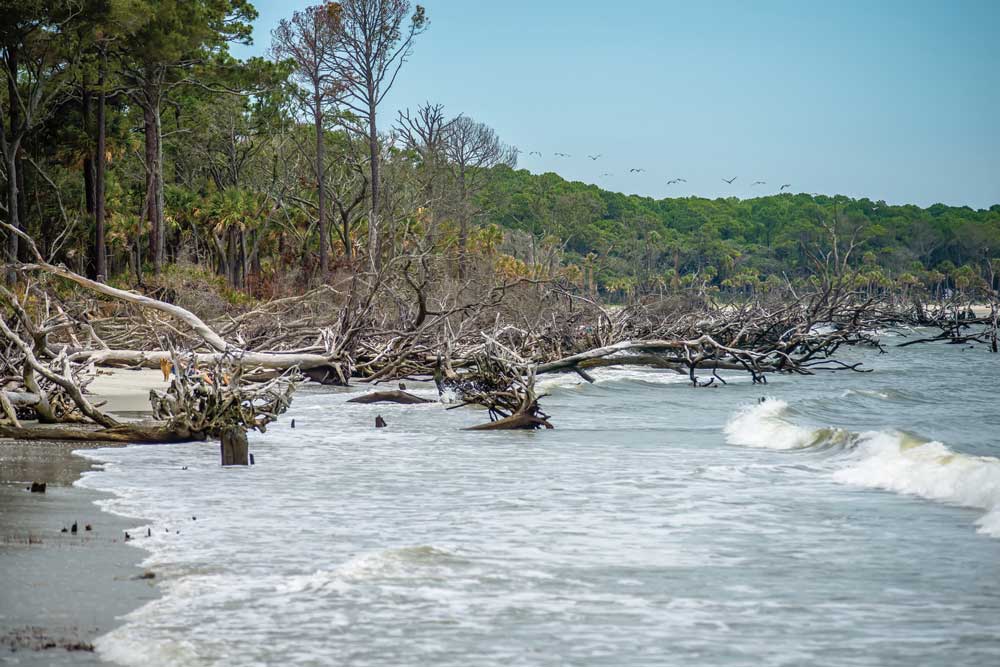