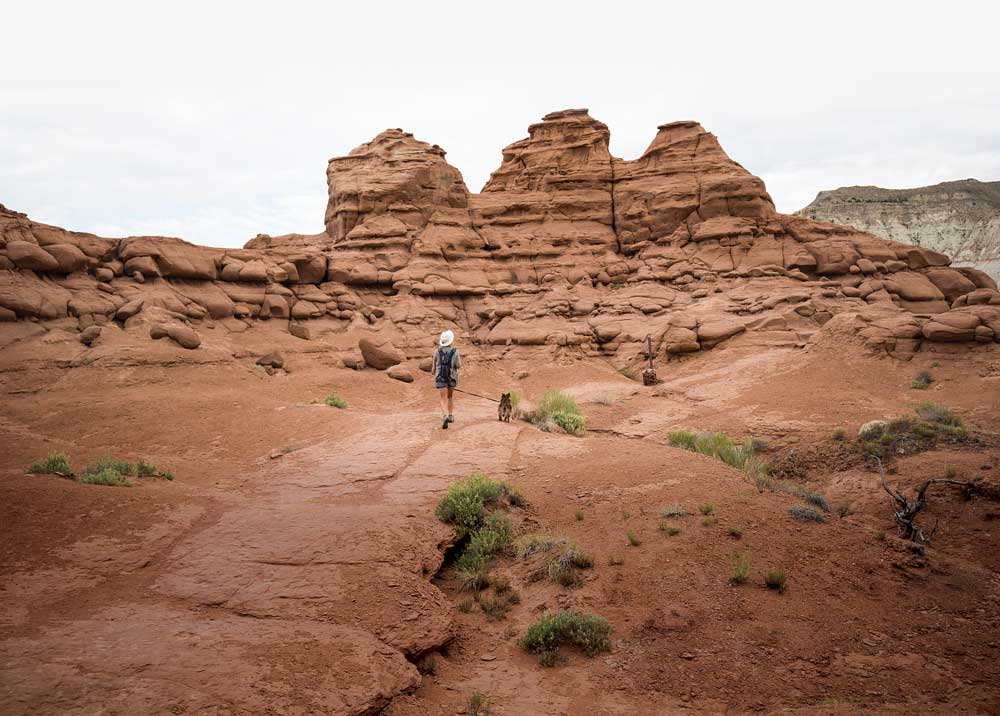 Beyond its role overseeing highway funding, construction, maintenance
and safety, the Federal Highway Administration also rates roads for their natural beauty and other important attributes. Overall, the agency has designated 150 roads National Scenic Byways or All-American Roads, the latter being the best of the best. Take a drive along Utah Scenic Byway 12, and you cannot but agree that the feds got it right when they named this 124-mile stretch of pavement an All-American Road.

Going from west to east, Scenic Byway 12 starts at the junction with U.S. Route 89 just west of Bryce Canyon National Park in southwestern Utah. The fun starts almost immediately. Take the turn east off Route 89, and by the time you get up to cruising speed, a highway sign proclaims “Red Canyon,” part of Dixie National Forest. That’s your cue to sit back and enjoy the ride.

Barely 100 yards past the sign, a pull-off beckons, and my wife and I get our first serious taste of what is to come. Three trails of less than a mile expose us to those impressive sandstone spires known as hoodoos that reach their apotheosis in Bryce Canyon. A mile farther on, behind the Red Canyon Visitor Center, another series of trails affords views of the surrounding area, including 15 red-rock arches. A half mile farther brings us to Red Canyon Campground, a well-placed U.S. Forest Service facility and our home for the night.

While enjoying the serenity of our Red Canyon campsite, a neighbor gave us a tip. We hadn’t planned to visit Cedar Breaks National Monument, about 35 miles to the west, but our new friend mentioned that the wildflowers there were in bloom. So early the next morning, we backtracked a bit and headed down State Route 143 from the village of Panguitch.

At 10,000 feet, spring comes late to Cedar Breaks, and the place was awash with color, rivaling in my mind only Mount Rainier for alpine-wildflower magnificence. Add a beautiful natural amphitheater, and you have sensory bliss. We took the ½-mile dog-friendly hike to the campground and the 2-mile Alpine Pond Trail, and the scenery was wonderful. The nice-looking Point Supreme Campground will be the place to stay on our next visit to the area. 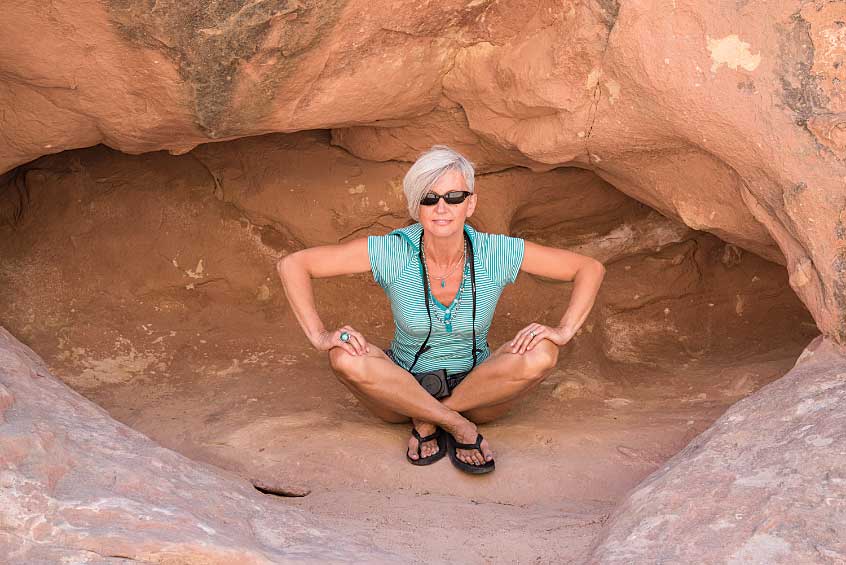 The slightest of overhangs was sufficient to provide shelter to those in need of it, ancient or contemporary. This one is in Capitol Reef National Park.

Bryce Canyon National Park is a favorite, besting the other beautiful public parks in Utah. I can’t resist gazing in wonderment at the multicolored spires of infinite variety pointing skyward. Geologists tell us that Bryce is not technically a canyon because by definition canyons are formed by flowing water (picture the Grand Canyon and the Colorado River). Instead, Bryce is a series of amphitheaters similar to the one at Cedar Breaks.

Getting to Utah’s All-American Road
From the junction with U.S. Route 89, Utah’s Scenic
Byway 12 travels 124 miles through Red Canyon,
Dixie National Forest and Bryce Canyon National
Park, then past Kodachrome Basin and Anasazi state
parks and Grand Staircase-Escalante National
Monument. The byway ends near the town
of Torrey at the junction with State Route 24,
about 5 miles west of Capitol Reef National Park.
For More Information:
Scenic Byway 12 Foundation
www.scenicbyway12.com

The park’s hoodoos formed by the freezing and thawing of water. Approximately 200 days a year, ice and snow melt during the day and freeze at night, fracturing the rocks until they create shapes that visitors come to see. Viewing them in the morning is totally different from viewing them at sunset, so we do both and get two different parks for the price of one.

There are a couple of must-do tasks. We drive the main park road, State Route 63, 18 miles from the visitor center to Rainbow Point, stopping at viewpoints and taking hikes along the canyon rim. We recommend in particular the aptly named Inspiration
Point and Sunset Point. At the latter, we hike the gorgeous 1.3-mile Navajo Trail from the rim down into the canyon, where we commune with those hoodoo gods. And then we do it again at sunset. In all, there are more than 50 miles of trail to suit any and all.

We camp at Sunset Campground in the national park.

From mid-April through late October, vehicles 25 feet and longer are not allowed in a number of Bryce Canyon parking lots, including those at the visitor center and Sunset and Inspiration points. During peak season, it’s best to unhitch at the campsite and drive your tow vehicle solo, or take one of the frequent shuttle buses to the park’s popular destinations. 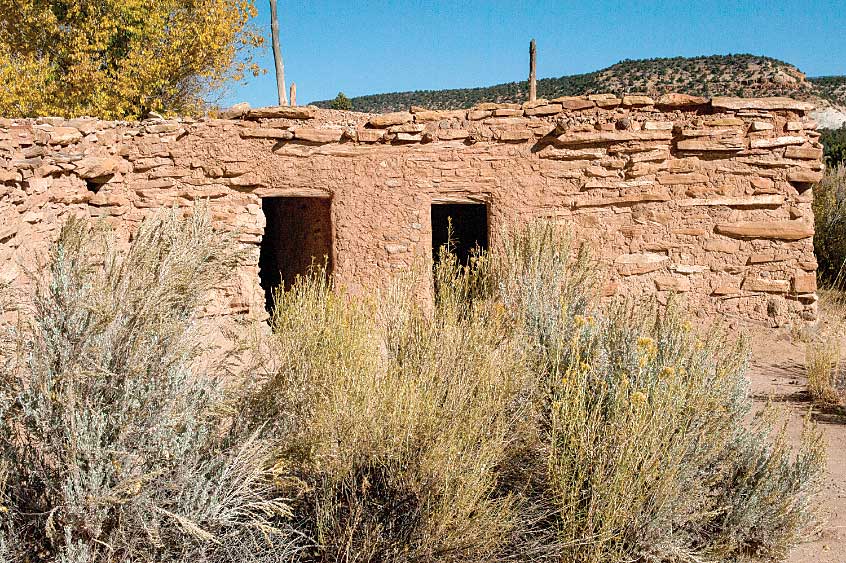 Scenic Byway 12 skirts the northern boundary of this largely undeveloped 1.9-million-acre national monument, one of two sections where it can be accessed by conventional vehicle. Roads into the monument’s interior are suitable for four-wheel-drive vehicles only or those traveling on foot, horseback or mountain bikes.

The monument was named by early geologists, and there’s some logic to it. The rock formations that we see are a series of cliffs and plateaus that resemble steps rising thousands of feet. Each step represents a geologic period of time, and they have been named to coincide with what we can readily discern — cliffs of Chocolate at the bottom, Vermilion at the second level, followed by White, Gray and Pink. Thus, the “staircase.” The nearby Escalante River shares the honors, named for Spanish priest and explorer Silvestre Vélez de Escalante. The river was named for him in 1872 by a Lake Powell survey crew.
We are inspired by the sheer immensity of the place as we gaze off into the seemingly endless distance and the kaleidoscope of colorful rock formations. We stop at the visitor center in the village of Cannonville and learn that this area has been a hotbed of discovery for paleontologists and has the added distinction of being the last place in the United States to be mapped, a testament to its remoteness and relative inaccessibility.

Grand Staircase-Escalante was set aside as a national monument in 1996 and is unique in that it is administered by the Bureau of Land Management, not the National Park Service. We wind up spending the night in the BLM campground at Calf Creek Recreation Area, midway between the villages of Escalante and Boulder, and take a few hours to hike the 3-mile trail to a 125-foot waterfall. Developed public campgrounds in the area are rare and generally unsuited to larger rigs, but Escalante has a number of RV parks. 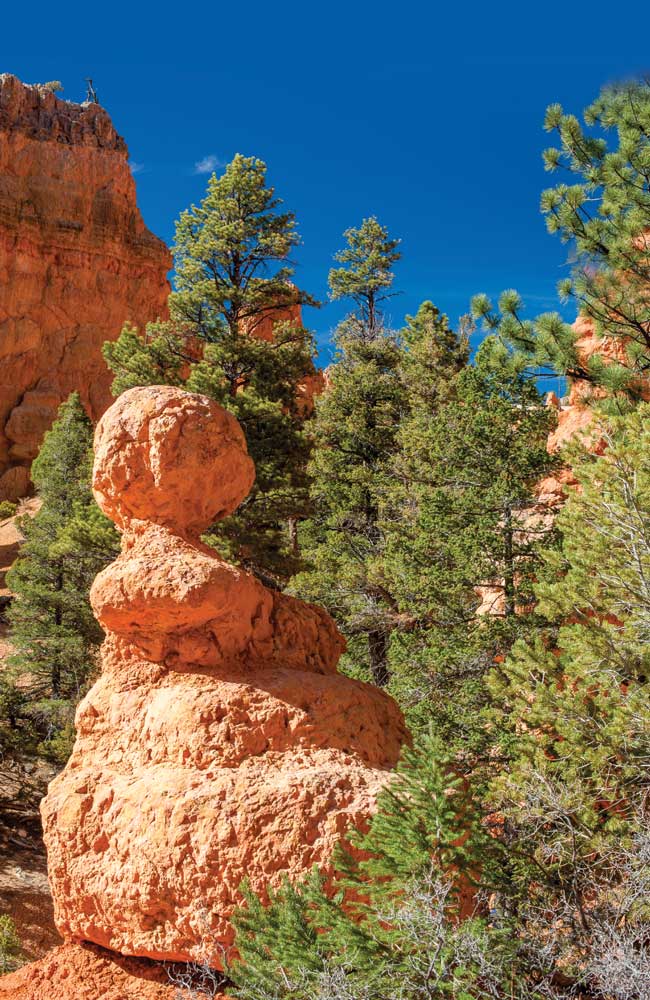 Hoodoos come in many shapes and sizes and are
constantly being reshaped as Mother Nature
continues her work.

Kodachrome Basin State Park spreads out just off Scenic Byway 12 near the aforementioned village of Cannonville, which lies just a few miles east of Bryce Canyon National Park. It is home to nearly 70 red-sandstone spires known as sedimentary pipes, ranging in height from 6 to 170 feet. In an area with no shortage of picturesque spires, these are different from those we see elsewhere. They were inspiring enough that the Eastman Kodak Company gave its consent to name the park after what is commonly regarded as the most famous photographic film of all time.

This is a great hiker’s park. We start at the 1½-mile Angel’s Palace Trail that affords wonderful views of Kodachrome Basin, Bryce Canyon and the surrounding area, a nice payoff for a short hike. While spending the night at the park’s 31-site campground, we decide that red is our favorite color.

Scenic Byway 12 ends at the village of Torrey where it intersects State Route 24. That is our signal to take a short detour by turning east on Route 24 to Capitol Reef National Park. Like the other parks on the route, this one has picturesque red-rock formations, but it also possesses some unique characteristics that set it apart.

A rounded mountain reminded early travelers of the nation’s capitol, so they named it Capitol Dome. And a steplike rock known as the Waterpocket Fold appeared to be as formidable to cross as a barrier reef would be in an ocean.

From about 300 to 1300 AD, ancestors of modern-day Hopi, Zuni and Paiute tribes inhabited this area and left behind some impressive and easily accessible carvings (petroglyphs) and paintings (pictographs), inspiring us to imagine how they lived and wonder why they left. About a mile east of the visitor center on Route 24, we hike a raised trail along a stretch of rock wall known as Petroglyph Panel where images easily recognized as bighorn sheep share space with maps, clan symbols and pictures of other animals.
Nice, but there’s more to come. The park’s main road, Scenic Drive, extends 8 miles from the visitor center. We drive it, stopping periodically to take pictures and read about landmarks. But once the pavement ends, the real fun begins. We drive another 2.4 miles on a good gravel route called Capitol Gorge Road (take your tow vehicle and leave the trailer at the campground). 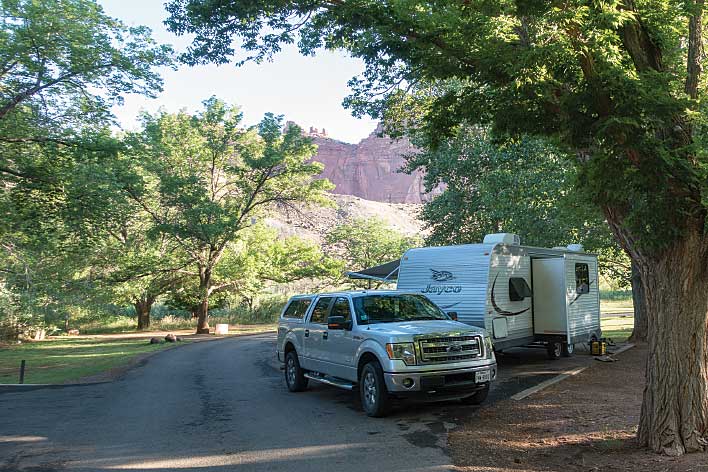 Finding space in the small parking lot at the end of the road, we stop and lace up our hiking boots. We review the trail map and know that we’re in for an easy 1¼-mile jaunt along a narrow wash with steep canyon walls. We soon learn that these rock walls are a marvel. In what the park calls the Pioneer Register, art left behind by travelers decorates the walls in many locations.

What is particularly interesting is the diversity of the inscriptions. Ancient petroglyphs share space with inscriptions by Spanish and European explorers, as well as early settlers. Many of these are dated so we have a travelogue detailing the entire breadth of local history, each “artist” having been inspired by the previous one. Seeing the occasional graffiti, we ask ourselves if this is sacrilege or simply another inscription left by a traveler using tools in common use today.

Capitol Reef pays homage to the early Mormon settlers who made their mark in Utah starting in the late 1800s. They planted orchards here containing more than 3,000 trees that still bear fruit, and we spend an hour harvesting apricots and happily pay the $1 per pound donation. We spend another hour cleaning rotting apricots off our boots, as there aren’t enough pickers to keep up with the crop, much of which ends up on the ground. We fondly remember that on a previous visit it was apples, so we suggest planning a visit around harvest season.

Later on, we visit the one-room Fruita Schoolhouse, built in 1896 and used until 1941, and the historic Gifford Homestead, now a small retail shop. We buy fresh berry pie, blueberry syrup and cinnamon rolls for breakfast, and set up camp in the park’s Fruita Campground, next to the apricot orchard.

In all of the southern Utah parks, it is important to be aware that many areas are prone to flash floods, so be particularly alert when rain is in the forecast, and also when hiking or camping near washes that you will see everywhere. A rainstorm upstream from where you are can be as dangerous as one that is right on top of you. Lightning is also dangerous year-round, and you should seek shelter if you hear thunder.

Don’t let these weather warnings dissuade you from exploring this spectacular region; just be watchful. 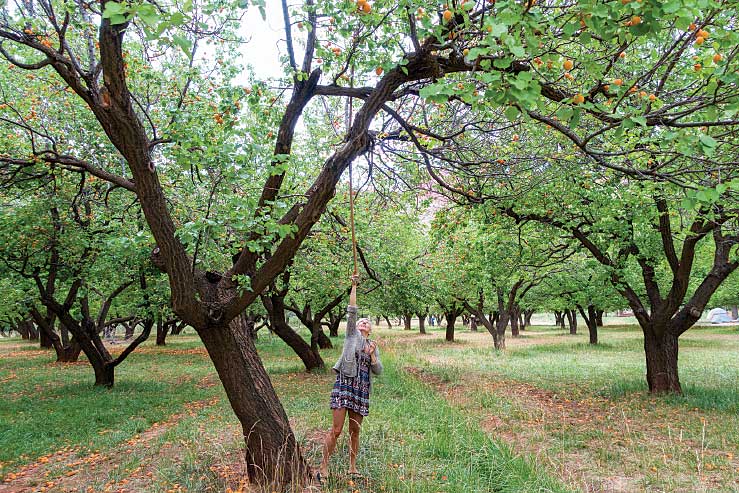 Where to Stay on the Scenic Byway

NEARBY: Thousand Lakes RV Park and Campground
In Torrey, 6 miles from the entrance to Capitol Reef, this Good Sam Park accommodates RVs with full-hookup sites and
a range of amenities.
800-355-8995 | www.thousandlakesrvpark.com

NEARBY: Wonderland RV Park
Another full-service Good Sam Park in Torrey, Wonderland has the distinction of being the closest RV park to Capitol Reef.
877-854-0184 | www.capitolreefrvpark.com

NEARBY: Canyons of Escalante RV Park
Located in Escalante, this Good Sam Park has full-hookup RV sites, including some pull-throughs.
435-826-4959 | www.canyonsofescalantervpark.com