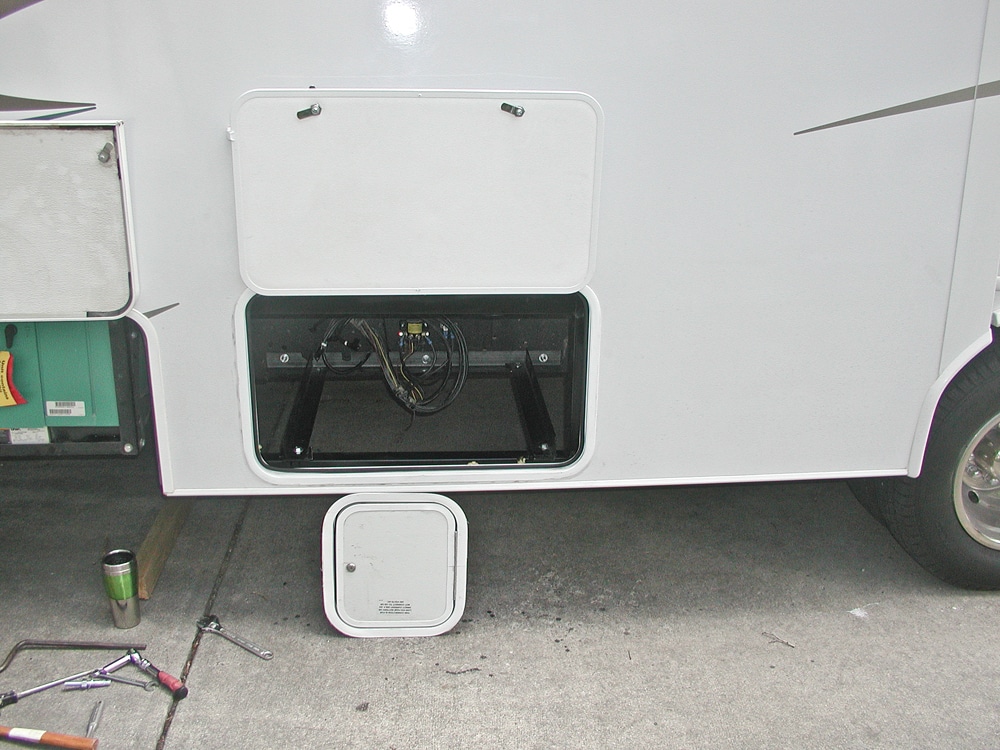 Ever wish you could add more battery capacity to your Class C motor­home, just like you might find in the big Class A coaches? Here’s an alternative that just might fit the bill without breaking the bank.

Last year I bought a used 2007 Jayco 31SS Class C motorhome equipped with an RV/marine deep-cycle 12-volt battery. The coach is well built and thoughtfully designed, but I need additional battery capacity to run my continuous positive airway pressure (CPAP) machine while I sleep. The challenge was to install enough battery capacity to run the coach’s heater and my CPAP machine all night without the need to run the onboard generator.

RV World installed a larger door and battery tray. Notice the newly installed battery door is more than twice the size of the old door (shown below).

I went through the power requirement calculations and couldn’t find a solution that would give me the required capacity to run the CPAP machine for eight hours each night in a single battery.

My Jayco came equipped with a single pullout tray with room for only one battery; I had to find a way to add more batteries. I searched online and found some RVers who solved the problem by placing additional batteries in other motor­home storage compartments. That solution came with three additional challenges: I would have to give up storage capacity in my coach, I would have to run long cables to other compartments, and if I used wet-cell batteries I would also have to consider how to vent the batteries for safety. I chose to upgrade the battery capacity in the space already provided.

I went to a local RV repair shop, RV World in Fort Collins, Colo., and discussed the problem with one of the owners, Tyler Gesick. He recommended replacing the existing battery tray and door with a larger one. An RV World service technician first removed the existing door and tray for the house batteries and then installed a door wide enough to accommodate a pullout tray with sufficient capacity to hold four house batteries. The cost for the door was $50.

I ordered a Kwikee locking pullout tray from Power Gear/Kwikee Products for $140. These trays are built-to-order and the lead time was four weeks. It turned out I needed that much time to design and build the support structure for the tray. The support brackets would have to accommodate four batteries and the tray, all of which weighed 240 pounds at full load. To support the outside end, I welded together 2-inch, 14-gauge square stock with angle tabs to attach to the frame extension that supports the motor­home floor.

Two angle brackets were welded to the battery tray frame to provide an attachment to the body support that extends from the motorhome chassis.

The completed frame with tray support rails is ready for the tray installation.

It was necessary to shim under the angle iron coming from the coach’s frame as I had been a little off on my measurements, and I wanted a level pullout tray. The tray was then bolted to the 2-inch angle iron.

For batteries, I chose a pair of Trojan T105 ($335) 6-volt golf cart batteries. With two batteries I have 220 amp hours of power. The tray is large enough to install another set of batteries, so if I find I need additional capacity in the future I can add two more batteries and double my capacity.

I did encounter a few problems on this project. After trying to attach a wire to the incorrect terminal of the batteries, I blew my 400-watt inverter. I searched for a direct replacement but found the model was no longer made. I contacted Jayco and was told the company is now installing the Xantrex PRO Inverter XM 1000 (1,000-watt inverter) so I ordered one online. I then found that the only plug powered by the inverter was the one by the TV. Because I needed a plug next to the bed that would be powered from the inverter to run my CPAP, I installed another outlet and split the AC line coming out of the inverter.

With the new inverter, Xantrex recommended a 150-amp fuse between the battery and the coach. Fuses can be challenging. If you blow one and don’t have a spare you are dead in the water. I opted for a 150-amp DC circuit breaker ($44) mounted on the frame instead of the fuse. It gives me a visible way to see if anything has blown, I don’t have to buy and stock additional fuses, and if something happens on the road I can fix the problem and reset the circuit breaker.

A 150-amp DC circuit breaker was installed to protect the motorhome’s entire DC system. This was installed instead of a 150-amp fuse.

For battery tie-downs, I used some rubber clamps with hooks to the back of the tray and to an angle iron that I attached to the tray. I will probably rework these tie-downs into a plastic frame that mounts to the top of the batteries and hooks to the frame as I had a little movement during a recent trip.

RV World was willing to let me do what I could handle and they did the rest. I welded the outboard frame and cut and installed the interior angle iron brackets. I also installed the new inverter (under the bed) and the AC outlet on the bed pedestal. This undoubtedly saved me several hundred dollars.

RV World installed the door, removed the old battery box and did the final electrical connection for the circuit breaker and battery cables ($40) to allow easy pull out of the tray. The total project cost was $1,276, with most of that ($1,066) coming from hardware. Labor was only $210 and I could have saved $287 had I not blown the inverter.

Now I can run the heater and CPAP all night without using the generator. We just returned from a 3,700-mile trip and everything worked very well.