Understanding and Maintaining Your RV’s Batteries 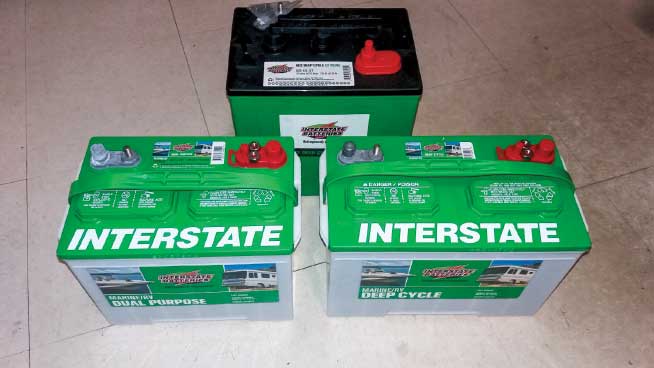 RV batteries were once considered an option primarily for off-grid camping. With the increasing complexity of RV electrical systems, batteries have become a necessity.

Understanding how batteries work and are charged, maintained and stored will ensure that they achieve their maximum longevity.

Lead-acid batteries comprise individual cells connected internally in series. Each cell contains lead plates with a separator between them and is filled with an electrolyte made of sulfuric acid and water. Positive plates are made of lead dioxide, and negative plates are pure lead. A chemical reaction between the lead plates and the sulfuric acid causes the plates to become positively and negatively charged. When an electrical circuit is closed, such as turning on a light switch, electrons flow from the negative plate to the positive plate, powering the circuit.

When lead-acid batteries begin to discharge, the lead plates become coated in lead sulfate, and the electrolyte solution begins to dissolve, increasing its water content. When fully discharged, the electrolyte consists primarily of water. The increased water content makes a discharged battery more susceptible to freezing. A fully charged lead-acid battery freezes at minus-92 degrees Fahrenheit, while a battery that is 80 percent discharged will freeze at 19 degrees Fahrenheit.

All batteries are storage mediums, because they do not create electricity; they store it. Once a lead-acid battery is discharged, it requires an electrical current to reverse the chemical process. During charging, the lead sulfate and water are converted back to lead, lead dioxide and sulfuric acid. An analogy would be to think of your RV’s water tank. Like a discharged battery, when the tank is empty, it can’t give you any water. But refill it, and it will provide water for your use. It’s the same with batteries. When charged, they will provide power to your RV’s appliances and accessories.

The most common type of battery used in trailers is the flooded lead-acid (FLA) wet-cell battery. Flooded batteries were invented more than 150 years ago, and they remain the battery of choice for most RVers, primarily because of their relatively low cost. Available in 6- or 12-volt configurations, flooded batteries vent small amounts of oxygen and hydrogen gas while charging; an explosion can occur if this gas is exposed to a spark or flame.

Wet-cell batteries must be stored either in a well-ventilated compartment or a sealed battery box with an external vent. The amount of gas generation increases when a flooded battery is overcharged. These gases are produced from the electrolysis of water from the electrolyte. Because water is lost during this process, flooded batteries require distilled water to be added periodically.

A variation of lead-acid battery technology is the AGM battery. AGM batteries have an ultrafine fiberglass mat embedded between the lead plates that absorbs the electrolyte. AGM batteries have several advantages over flooded batteries including a spill-proof design, lower internal resistance, faster charging times and a longer life cycle. They are less likely to self-discharge, are less prone to sulfation and can be mounted in any position. On the negative side, AGM batteries are more expensive and require an AGM-compatible battery charger.

Gel-cell batteries offer similar advantages over flooded batteries. Gel cells contain no liquid. The sulfuric acid is mixed with a thickening agent to form a gel-like substance. Gel-cell batteries are expensive and require a charger that is designed for their charging profile. They offer a slight performance advantage over AGM batteries at high ambient temperatures and under slow-discharge conditions, but their higher price makes AGM batteries the more popular choice.

AGM and gel-cell batteries are valve-regulated lead-acid (VRLA) batteries. VRLA batteries do not vent hydrogen under normal conditions. Hydrogen and oxygen are recombined inside the battery to prevent outgassing and loss of water. However, if a VRLA battery is overcharged or overheated, a safety valve will open, allowing gases to be vented. For this reason, proper ventilation is still required. VRLA batteries are considered sealed, maintenance-free batteries that require no periodic adding of water.

Each cell in a lead-acid battery is capable of storing 2.1 volts. A 12-volt bat­- tery has six cells, while a 6-volt battery has three. The terminology is confusing because a fully charged 12-volt battery produces 12.6 volts and is more than 50 percent discharged at 12 volts.

There are two kinds of lead-acid batteries: starting and deep-cycle. Starting batteries have several thin lead plates designed to produce a short high-current burst of electricity, making them well-suited for starting engines. Their capacity is measured in cold cranking amps (CCA). CCA is the amount of current, measured in amperes, that a fully charged battery can deliver for 30 seconds while still maintaining 1.2 volts per cell. The higher the CCA rating, the more capable the battery for starting an engine.

Starting batteries are designed to be slightly discharged, usually by less than 5
percent of their capacity, and immediately recharged. Repeatedly discharging a starting battery by more than 20 percent of its capacity will damage the lead plates and cause premature failure. Deep-cycle batteries are designed with thick plates and should not be discharged below 50 percent of their capacity per cycle for maximum longevity.
A cycle occurs when a battery is discharged then recharged. Depth of discharge is how low the battery was discharged. The less depth of discharge a deep-cycle battery is routinely subjected to, the longer that battery will last. 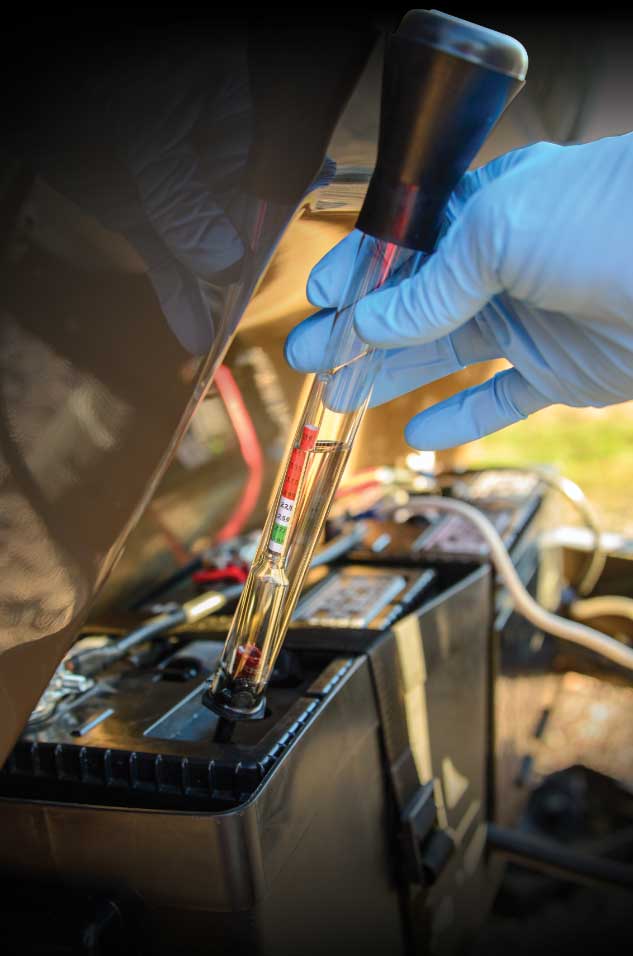 Electrolyte is drawn out of the cell of a wet-cell battery and into a hydrometer so the specific gravity and cell voltage can be measured. This battery is in the red zone, indicating that it needs to be charged.

An ampere-hour (amp-hour or Ah) is the amount of energy charge in a battery that will allow one ampere of current to flow for one hour. To get an amp-hour rating, a battery must be fully discharged over a specific time. The standard time used for deep-cycle batteries is 20 hours, but manufacturers often list other time ratings. If a battery has an 80 amp-hour rating at 20 hours, the battery provides 4 amps for 20 hours. The higher the amp-hour rating, the greater the battery’s storage capacity.

Lead-acid batteries come in standard physical sizes determined by the Battery Council International, a trade association of automotive-battery manufacturers. The most common size for trailers is group 24. Group 27 batteries are a popular upgrade. Although group 24 and 27 batteries are the same height and width, group 27 batteries are 1.8 inches longer and offer more storage capacity than similar group 24 batteries.

Physical size is not the only factor in determining a battery’s storage capacity. Different models and brands within the same group can have different capacities that are determined by the construction and internal design of the battery. When comparing lead-acid batteries, the battery’s capacity ratings should be considered
to determine its performance level.

The most common cause of lead-acid battery failure is sulfation. Sulfation is the formation of sulfate crystals on a battery’s lead plate that occurs slowly over time as the battery undergoes numerous charge and discharge cycles. The rate of sulfation greatly increases if a battery is overcharged, undercharged, stored in a discharged state, or the electrolyte level drops below the top of the lead plate, exposing the plates to air. Proper conditioning of a battery immediately after discharge will help minimize sulfation. 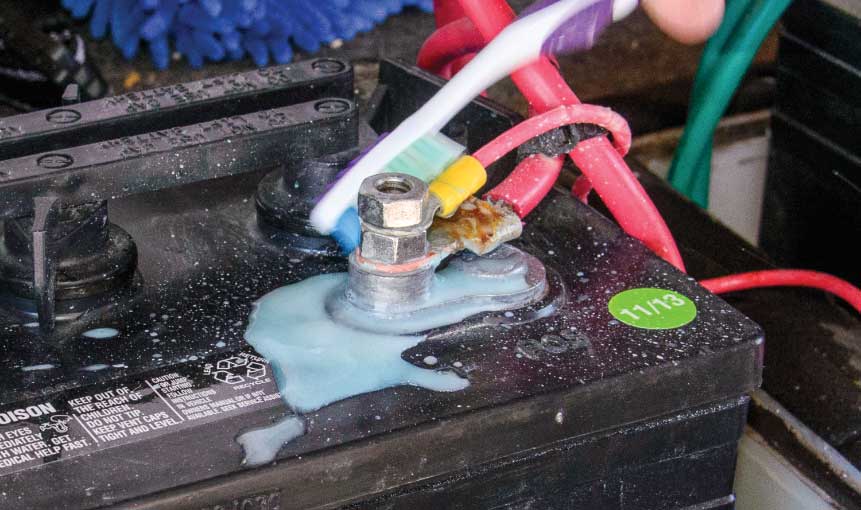 A regular part of wet-cell battery maintenance is cleaning away the corrosion with a solution made from one cup of baking soda per gallon of water. To clean the battery terminals, use a discarded toothbrush or wire-bristle brush with the
baking-soda solution, then rinse well. A terminal-cleaning tool can also be used.

How a battery is charged plays a key role in maximizing its life. Trailer batteries are charged by the trailer’s electrical converter/charger applying DC current. Some converter/chargers use single-stage charging, which provides a single constant voltage to the battery.

Once batteries are charged, a maintenance charge keeps them topped off. Some multistage chargers have an equalizing cycle that applies high voltage at a low amperage to help remove sulfation from the battery plates and make sure all the batteries’ cells are equally charged.

When performing wet-cell battery maintenance, make sure the area is well ventilated, and wear rubber gloves and goggles. Begin by removing the battery’s vent caps. Each battery cell should be filled to 1⁄8 inch below the plastic vent tubes. Avoid overfilling the batteries, which might cause the electrolyte to overflow. Only distilled water should be used. Tap water contains dissolved minerals and impurities that can coat the plates and inhibit the chemical reaction that normally occurs in a battery, resulting in decreased performance and a shortened battery life. 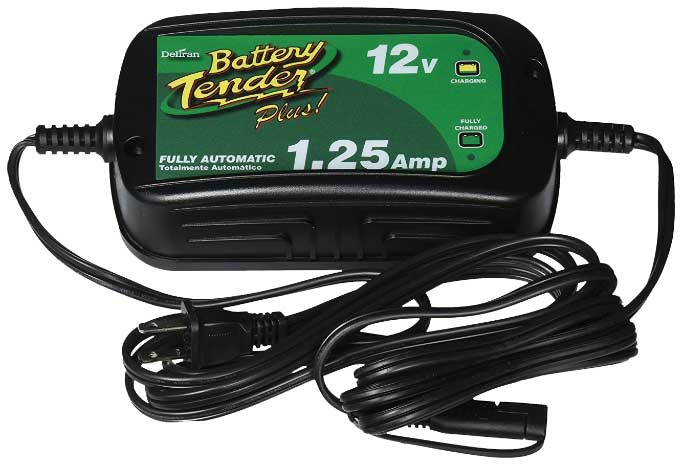 Maintenance chargers keep stored batteries charged automatically. Deltran’s high-efficiency Battery Tender Power Tender products are among those approved for use in states such as California and Oregon where battery chargers are required to be energy-efficient.

Battery terminals should be cleaned to remove corrosion. Start by removing the negative cable, followed by the positive cable. A mixture of one cup of baking soda and one gallon of water or a commercial spray-on terminal cleaner can be used. An old toothbrush or a small, stiff wire brush is useful for scrubbing. If a spray cleaner is used, follow the instructions on the can. After cleaning, rinse the terminals with water and reconnect the positive terminal, followed by the negative terminal. Then seal with a battery-terminal sealant spray, available at auto-parts stores, to deter future corrosion.

As an alternative to manually removing vent caps and filling each cell, watering systems are available from companies such as Trojan and Flow-Rite. These systems allow remote filling of all batteries from a single hose without overfilling. This can be a real time-saver, especially if reaching the battery caps is difficult.

Trailer owners often overlook proper off-season storage of batteries. If the trailer’s shorepower cord is plugged into an electrical outlet and is equipped with a multistage charger, the batteries will be kept properly charged and require only periodic fluid-level checks. Most OEM converter-chargers will provide only a float charge, which will not condition batteries properly. If it is not possible to keep the trailer plugged in, the batteries should be kept fully charged, removed from the trailer and stored in a cool, dry place. This is particularly important in cold climates where a discharged battery is likely to freeze.

Batteries in storage must still be maintained. Lead-acid batteries will discharge over time, even if they are not being used. The rate of self-discharge depends on the batteries’ design and the temperature. Flooded batteries have higher self-discharge rates than VRLA batteries. Higher temperatures increase self-discharge, which is why batteries should be stored in a cool place.

The Battery Council International recommends that batteries in storage be given a freshening charge if voltage drops below 12.4 volts for a 12-volt battery or 6.2 volts for a 6-volt battery. Battery voltage can be checked with a multimeter set to DC volts or with a hydrometer (see “Battery Testing” on page 39). Batteries should be given a full charge immediately after they are reinstalled on a trailer.

Lead-acid batteries are the heart of an RV’s 12-volt DC electrical system, and with proper care and maintenance should provide years of service. 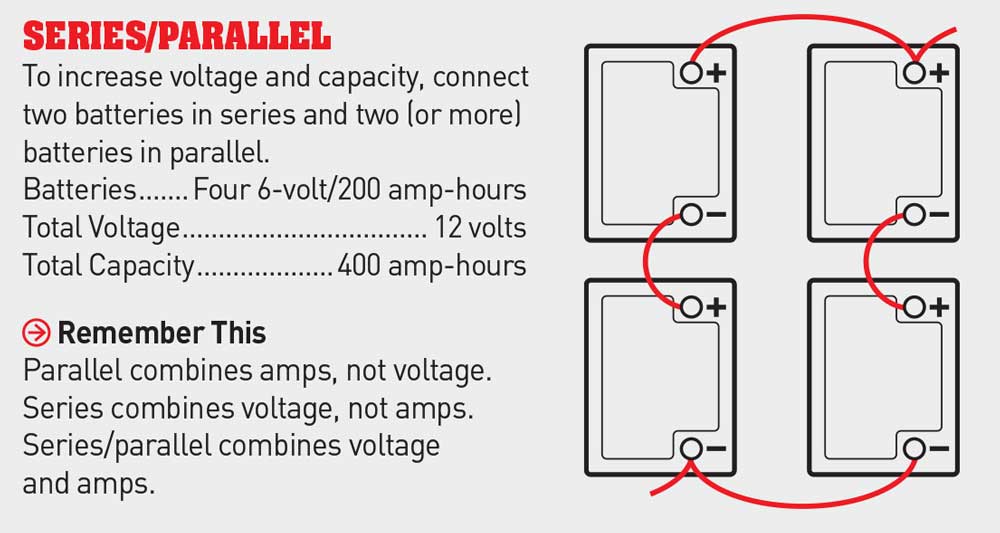 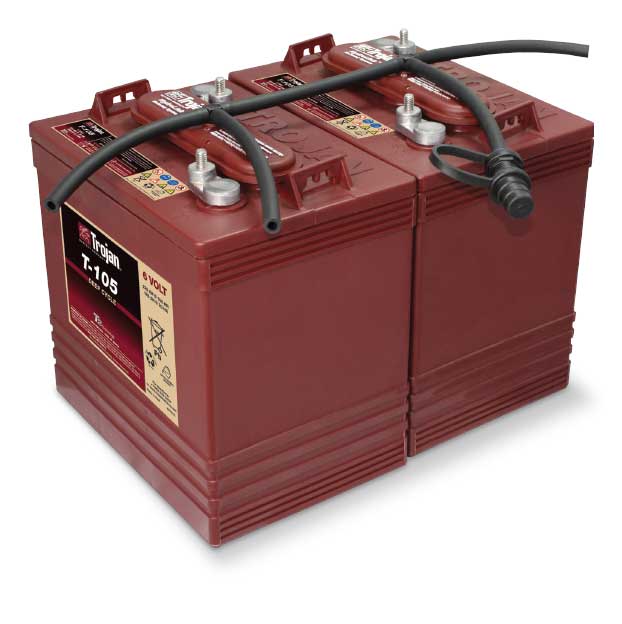 Single-point watering systems such as Trojan’s HydroLink (above) and Flow-Rite’s On-Board RV Edition and Qwik-Fill simplify the maintenance task of keeping proper levels of water in multiple battery cells.

Battery state-of-charge charts for voltage and specific gravity can be found online by doing a key-word search in the web browser.