By their very nature, all national parks are places where the senses are invigorated. As you look up at the gigantic redwoods towering above you, or listen to the

mournful sound of a loon calling across the water, or feel the rough granite as you clamber to the top of a rocky outcropping, you can’t help but become more attuned to the sights, sounds and surfaces that surround you.

But what if we told you there was a park that appealed to all five of your senses, one where vision, hearing, touch, smell and even taste worked in concert to create an unforgettable experience? If that possibility sounds like a stretch, allow us to introduce you to Capitol Reef National Park.

Fruits of Your Labor

The key to this full-tilt sensory experience is the fact that Capitol Reef is home to the largest historic orchards in the National Park Service’s vast holdings. 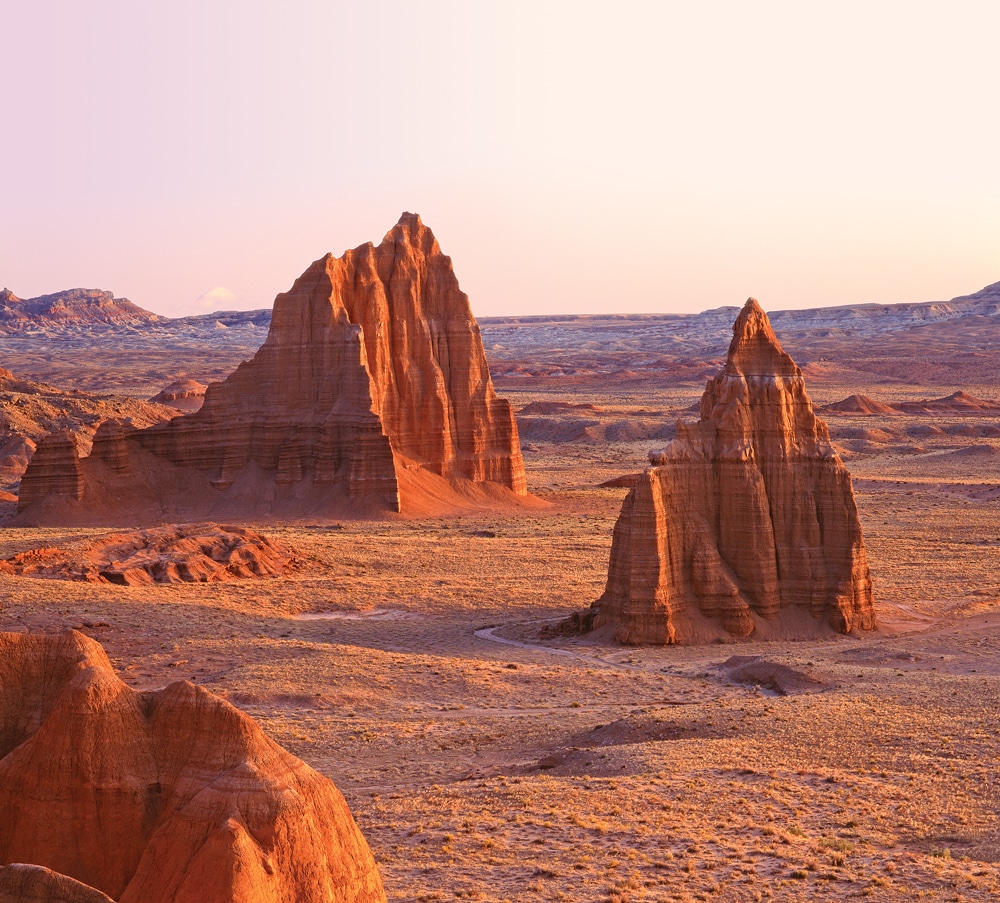 That means you can show up in the spring and be treated to the intoxicating scents of 3,000 apple, pear, cherry, apricot and peach trees in bloom. Turn up later in the growing season and you’ll be able to wander through the orchards sampling these fruits – many of which are heirloom varieties that are rarely seen in grocery stores – fresh from the tree. You can also pick yourself a basketful to take with you for a modest fee.

Truth be told, though, as uniquely mouthwatering as the park’s bountiful harvests are, they’re just a small part of Capitol Reef National Park’s appeal.

Capitol Reef may be the least visited of Utah’s “Mighty 5” national parks – a collection that includes Arches, Bryce Canyon, Canyonlands and Zion – but don’t let that fool you. People have been coming to this valley since prehistoric times.

Capitol Reef National Park is located in south-central Utah and can be accessed from the east (take exit 40) and west (take exit 149) via Interstate 70, and from the Spring is in the air everywhere. A simple fact that, we humbly submit, means you should get out there and enjoy the heck out of it! And what better place to do that than at one of the 400-plus units under the protection of the National Park Service (NPS). As the NPS celebrates its 100th birthday this summer, we’ll be right there beside you with our yearlong series full of unforgettable experiences – from mild to wild – that are unique to America’s national parks. Places where we sincerely hope you’ll Find Your Adventure in the months ahead.

Archaeologists tell us that bands of nomadic hunter-gatherers occupied this area as many as 12,000 years ago. The presence of the more recent agriculturally oriented Fremont culture that replaced them is easier to find evidence of, thanks to the large petroglyph panels they left scattered on rock walls throughout the park.

As for non-native peoples, their “discovery” of this hidden valley didn’t come until late in the 19th century. In fact, this rugged country remained one of the last blank spots on the U.S. map until famous Grand Canyon explorer John Wesley Powell and his team fanned out to explore this area in 1869.

Within a decade, Mormon settlers began establishing small communities throughout southern Utah. One man, an immigrant named Nels Johnson, recognized the favorable growing conditions in this isolated valley and planted the first of many apple, pear, peach and cherry trees. No wonder that the town that grew and flourished here adopted the name Fruita.

Today the tiny town of Fruita has all but disappeared. However, you can still see reminders of the 10 or so families who lived and worked here, in places like the one-room schoolhouse near the visitor center, the 1908 Gifford family home, now a museum and, of course, the extensive orchards that grow throughout the Fruita Valley.

If you look at Capitol Reef National Park on a map, the first thing you’ll notice is that it’s unusually long and narrow. That’s because its boundaries were drawn around a particularly noteworthy geologic feature called the Waterpocket Fold.
This remarkable wrinkle in the earth’s crust, which stretches for almost 100 miles north to south, takes its name from the countless small bowl-like depressions that hold rainwater after a storm. Look at it from the right vantage point and it’s a classic example of a monocline, with a gradual slope on the east side leading up to a line of steep cliffs. These sheer, unbroken rock walls were once such an impediment to travel that early settlers likened them to an underwater reef.
In places, these reddish-orange cliffs are topped with a cream-colored Navajo sandstone that weathers to form rounded domes not unlike the one atop the U.S. Capitol building. Put the two ideas together and you’ll understand where Capitol Reef National Park gets its unusual moniker. 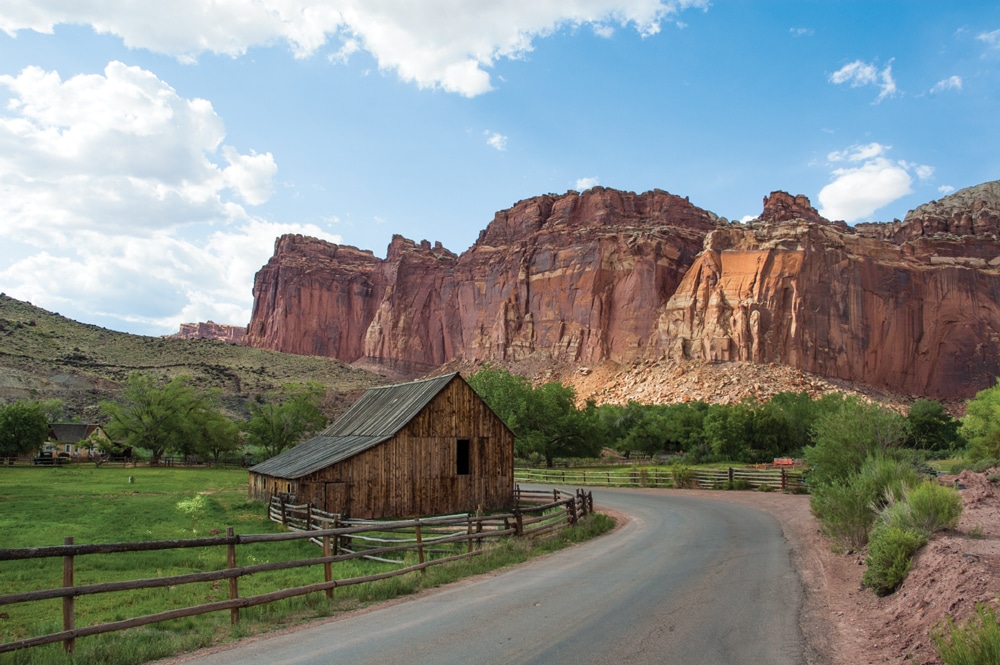 The Gifford homestead – in the heart of the Fruita Valley – includes a smokehouse, garden, pasture, rock walls and a barn. Photo: visitutah.com

Access to the main part of the park is relatively easy thanks to state Route 24. The park’s 7.9-mile Scenic Drive ($10 entrance fee) starts at the visitor center just off the highway and meanders along past a wide-open floodplain known as Grand Wash. At the end of the paved road is the generally well-maintained dirt track known as Capitol Gorge Road, which weaves its way into the very heart of Waterpocket Fold between towering cliffs of buff-colored sandstone.

While most visitors never venture any farther than this, there are adventures waiting to be had in more remote parts of the park. South of state Route 24, you have both Notom-Bullfrog Road, which parallels the park’s eastern boundary, and Highway 12, which does the same thing on the west side of the park. Both are great drives in and of themselves but, more importantly, they connect to Burr Trail Road, which offers views of the Henry Mountains and direct access to the southern reaches of the Waterpocket Fold. Note: The Burr Trail switchbacks are not considered suitable for RVs.

North of Highway 24 is an area known as Cathedral Valley, named for its dramatic freestanding rock towers not unlike the formations found in nearby Monument Valley. Unfortunately, accessing this part of the park requires a high-clearance, four-wheel-drive vehicle.

When it comes to what to do on your visit to Capitol Reef National Park, the list of possible adventures is long and wide-ranging. The easiest way to see all that Capitol Reef has to offer, of course, is on wheels. Most park roads are at least partially paved, and even the gravel sections are accessible to ordinary passenger vehicles in dry conditions.

If you’re looking to get farther off the beaten path, there are outfitters in nearby towns like Torrey and Boulder who can set you up with ATVs or rent you a four-wheel-drive Jeep. If you don’t feel comfortable motoring through the wilderness on your own, many of the same companies will take you on a tour of these less accessible areas led by an experienced guide.

For those who’d prefer a different kind of horsepower, other local guide services offer a range of horseback adventures from easy half-day trail rides to multiday backcountry camping trips. Either way, you’ll see places you probably couldn’t get to on your own thanks to the horse’s own natural four-wheel – or should we say four-hoof – drive system.

Other guided tour options include fly-fishing trips, where you can land brown trout measuring 20 inches or more. Rock art tours allow you to seek out little-known petroglyphs, while photography tours make it possible to take home outstanding images of this rocky wonderland.

Capitol Reef is a hiker’s paradise, with more than a dozen well-marked trails in the main section of the park alone.

One of the best and easiest outings in this area is a visit to what’s known as Panorama Point or the Goosenecks Overlook, which lies just west of the visitor center off state Route 24. There you’ll find what can best be described as a miniature Grand Canyon, as the meanders of Sulphur Creek have cut a convoluted channel into the bedrock hundreds of feet below. 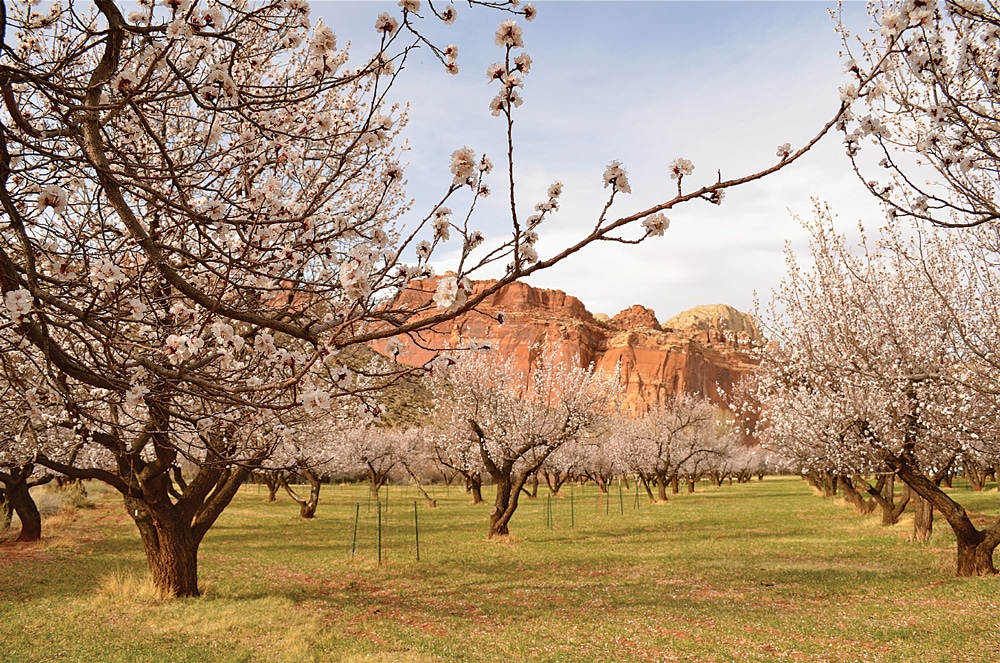 Grand Wash is another prime hiking destination. From the parking area you can hike a short distance to view 400-foot Cassidy Arch, named for outlaw Butch Cassidy, who is said to have frequented this area.

For a unique hiking experience, check out one of the many narrow slot canyons in the area, including the winding passage known as Muley Twist Canyon. Local outfitters run tours to visit this and other slot canyons, or you can explore them on your own.

Finally, be sure not to miss the large petroglyph panels located just off state Route 24. Many of the trapezoidal human forms are depicted with facial expressions and adorned with elaborate headdresses and necklaces. Other images feature animals such as deer and bighorn sheep, plus symbols including handprints and abstract designs. Though some of these petroglyphs can be seen from the road, we suggest you stop and take the short boardwalk that will give you an up-close look at this extraordinary collection of rock art.

While a visit to Capitol Reef National Park shares much in common with other parks, there’s one thing that sets it apart. Namely, a chance to stimulate all five of your senses in a place where full-on sensory overload is as much a part of the unforgettable experience as the scenery.

Grand Wash, which follows a narrow canyon, is one of the easier trails and only 2.2 miles long.

Visiting the main part of Capitol Reef National Park is a low-stress experience thanks to the paved Scenic Drive and well-signed side trips. However, if you plan on venturing farther off the beaten path in a dinghy vehicle, you’ll want to be prepared. First be sure to check with the rangers at the visitor center on road conditions and the weather forecast, as wet weather can make some unpaved roads impassable. Also make sure you have a full tank of fuel, a spare tire and working jack and lug wrench, plus sufficient water, food and warm clothes/blankets in case a mechanical breakdown leaves you temporarily stranded.

As for where to spend the night, Capitol Reef National Park’s Fruita Campground (435-425-3791, www.nps.gov/care) has 64 sites, with no hookups, available on a first-come, first-served basis. The campground has potable water, bathrooms (but no showers) and a dump station. If you need hookups, there are also a number of private campgrounds nearby, including Sandcreek RV Park, 435-425-3577, www.sandcreekrv.com; Thousand Lakes RV Park, 435-425-3500, www.thousandlakesrvpark.com; and Wonderland Resort and RV Park, 435-425-3665, www.capitolreefrvpark.com.