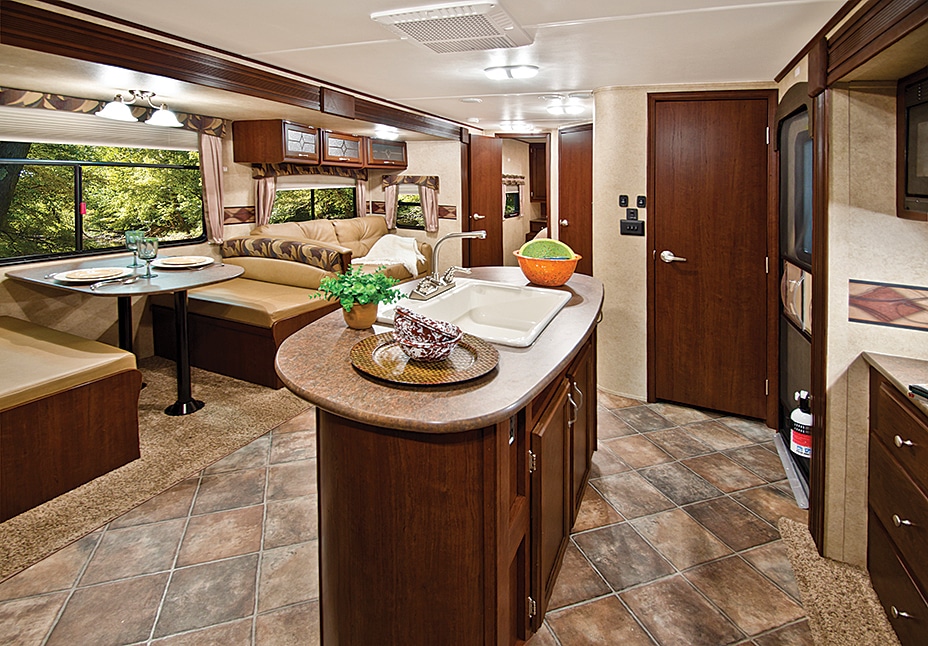 Promoting a travel trailer as a “half-ton-towable” has meant different things at different times. For years, though, it generally translated into having an RV short on everything from length to creature comforts, both of which add weight. But if the recent recession taught RV manufacturers anything, it was “how to do more with less” — and as the travel trailer market has evolved, builders re-educated themselves and began employing more advanced construction techniques to provide a new wave of lighter-weight towables without sacrificing amenities.

Granted, automakers have also contributed handsomely to the resurgence of towable RVs by dramatically increasing towing capacities of their popular light-duty trucks — but you don’t really need a half-ton truck with the ability to pull 11,000 pounds when you can buy a 38-foot travel trailer like the EverGreen RV Sun Valley S300BHSL that hits the scales dry at about 7,600 pounds.

And that’s with all the bells and whistles, including an outdoor kitchen.
“We use what we call ‘DuraLite’ construction,” noted Doug Lantz, Evergreen’s vice president of sales and marketing. “It’s a six-sided, double-welded aluminum frame. Not only is it stronger and more durable than wood framing — it eliminates flex and isn’t susceptible to rot — but it’s a lot lighter.”

In fact, Lantz estimates that by using aluminum framing and laminate construction — the roof, side walls, floor, and front and rear walls are all laminated — EverGreen is able to trim the Sun Valley’s weight by about 20 percent compared with typical stick-and-tin building methods. In a trailer of this size, that works out to about 1,500 pounds.

There’s lots of room in the main living area for dining and entertaining, or gathering around the kitchen island.

But while the weight saving is substantial, it’s not unexpected; in today’s market nearly every manufacturer is shedding pounds. What really distinguishes the Sun Valley S300BHSL is its floorplan, along with a couple of unique features intended to enhance its use. And, while we’re getting ahead of ourselves a bit, one that really stands out is a simple bracket mounted on the exterior, just aft of the centered entry door, to support the unit’s flat-panel LCD TV. The TV rides in a similar bracket in the main cabin and can be removed and repositioned outside, where there also are requisite hookups. Additionally, the full-size coat closet immediately inside the unit is a nice touch.

Designed for large families, this bunkhouse model encompasses three very distinct living zones — and one is expressly designed for the kids. While the front of the trailer encompasses a fairly typical bedroom suite with walk-around queen bed (ostensibly, mom and dad’s sleeping quarters), the rear of the unit features side-wall-mounted bunkbeds separated by ample storage running across the rear wall. Both bunks are “upper” units: the curbside bunk is built atop yet more storage cavities, while sleeping arrangements streetside — contained in an 8-foot-wide slideout — are mounted above what EverGreen calls “gaming chairs” — oversized, floor-mounted seats that can fold out for additional sleeping positions; the bunk riding above them is hinged and pivots to allow for extra headroom. The counter area above the built-in dresser is pre-wired for an additional TV.

Kids will enjoy hanging out in the back bedroom where they can watch TV or play video games from the comfort of oversized seats.

Built with an eye toward entertaining, the main cabin features an open floorplan with an island kitchen and oversize windows that add to the feeling of spaciousness. The curbside galley, fitted with a three-burner cooktop, 6-cubic-foot refrigerator, a microwave and plenty of cupboard space, rides in an 8-foot-wide slideout, while a 12-foot streetside slideout is home to the dinette and sofa, both of which can convert into additional sleep stations.

“Our slideouts are deeper than what you may find elsewhere, which adds to the livability of the unit,” Lantz pointed out. “They are 42 inches deep, rather than 36 inches, which increases usable floorspace when the trailer is set up at a campsite.” EverGreen also utilizes a four-point slideout system where all four corners of the unit extend and retract equally to reduce stress on the mechanicals.
The kitchen island is home to a sink with a single oversize bowl and gooseneck faucet to make cleanup of pots and pans easier, and the curved ends of the island also are hinged to provide yet more storage. There’s also an entertainment center, with a 26-inch LCD TV and AM/FM/DVD console incorporating an iPod charger, built into the common wall with the rear bedroom.

In addition to the double bunks, the gaming chairs fold out for more sleeping space.

The side-aisle bathroom, meanwhile, is located curbside between the coat closet and forward bedroom and boasts a roomy neo-angle shower enclosure, toilet, vanity and cabinet. “Again, when you have children or are entertaining, you want the bath to be more private and off to the side,” Lantz noted. There’s also a second access door between the forward bedroom and bath.

Outside, the Sun Valley is dominated, naturally, by the curbside kitchen — replete with a refrigerator, a sink, storage space and a grill that affixes to a swing arm mounted to the rear bumper. What isn’t as noticeable at first blush is the completely finished and lighted forward pass-through storage compartment with slam-latch baggage doors or, in back next to the water hookups, the black tank flush.

“That’s something customers have asked for and is extremely popular,” said Lantz. “It helps to clean out the black tank when you’re flushing the tanks and helps maintain the integrity of the monitor panel.”

EverGreen also outfits the Sun Valley with power stabilizer jacks as standard equipment. There are, in fact, few options available on the $34,900 trailer, a short list that includes a power (rather than manual) awning, upgrading the 13,500-Btu A/C to 15,000-Btu, 32-inch LCD TV, hide-a-bed, 50-amp service and a power A-frame jack. You supply the family.