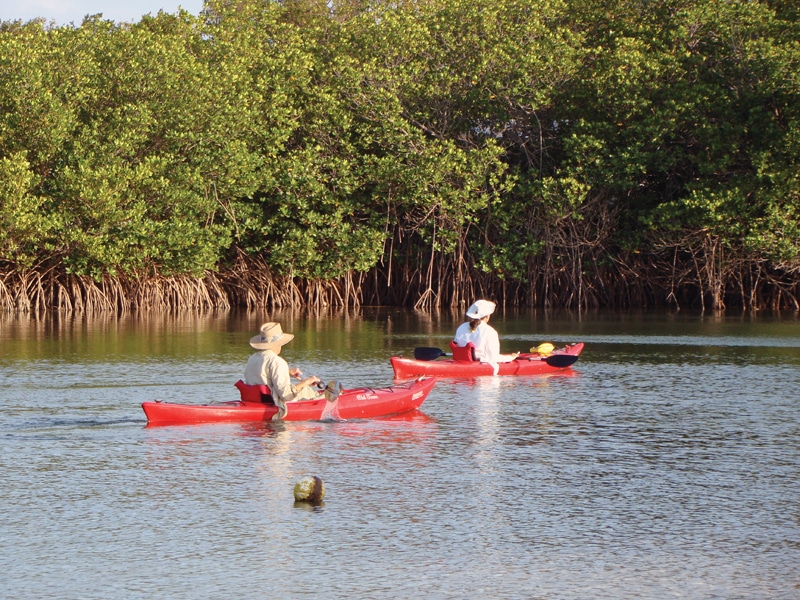 From the instant I picked out our campsite on the Florida State Park’s website, I had a good feeling about this spur-of-the-moment trip to the Florida Keys. Brochures claimed the beaches on Bahia Honda Key were some of the best in the nation, and we lucked into a waterfront campsite.

The Keys are a group of subtropical islands off the southeastern tip of the Florida peninsula. Of the approximately 1,700 islands, about 30 of them are inhabited. The inhabited islands are accessed via US 1, the Overseas Highway, which gradually runs southwest curving to Key West, the last inhabited island. The Keys lie along the Florida Straits, splitting into the Atlantic ocean from the southern tip of Florida jutting east of the Gulf of Mexico. The islands were formed from exposed portions of an ancient coral reef.

The quiet waters around Bahia Honda State Park are ideal for kayaking.

In the Keys, all location references start with the Mile Marker number on the Overseas Highway, counting down from 106 in Key Largo to 0 in Key West. At Mile Marker 37, we turned into Bahia Honda State Park and were greeted by two of the friendliest rangers I’d ever met. They were efficient, too, even when they took time out to hug returning guests. Mona McCauley, senior clerk, has been making friends at this park for 25 years.

Henry Flagler, a wealthy oil tycoon and real estate developer, was the founder of the Florida East Coast Railway. By 1904, the railway ran from St. Augustine to Homestead, south of Miami. When the construction of the Panama Canal was announced in 1905, Flagler decided to extend the railway to Key West, the closest deep-water port to the Canal. Seven years and $50 million later, Flagler, at the age of 82, rode the first train on the Overseas Railway into Key West. Unfortunately, a hurricane in 1935 destroyed much of the railroad in the Middle Keys.

Calusa Beach, at the south end of Bahia Honda Key, has a picturesque swimming area and sandy shore.

We were lucky to get this campsite. People book these sites eleven months in advance. Someone else’s last-minute cancellation was our good fortune. We were here due to our own change in plans. In Florida to watch Endeavour’s final launch in April 2011, we had time to spare when it was delayed.

Appreciating our stroke of serendipity, I was even more excited as we pulled into our large campsite. I felt that child-like, first-day-of-vacation anticipation. While my husband hooked up to electricity and turned on the air conditioner, I changed into a swimsuit and slathered sunscreen on my Colorado-winter-white thighs.

We drove a short distance to Sandspur Beach. Reality seldom matches expectation, but this time there was no disappointment in experiencing the real thing. It was a natural, healthy beach –uncrowded and peaceful. A wrack line consisting of dead algae, sea grass and tiny critters called amphipods marked high tide along the shore. No one served umbrella drinks or sold tamales on the manicured beach. A couple walked along the shore. Several children played in the water. We followed suit, settling into the laid-back lifestyle.

Cares of the world are miles away for sun worshipers at the Fort Taylor beach.

Silver Palm Nature Trail lies at the northeast end of the parking lot on Sandspur Beach. We took a self-guided walking tour through the hammock (tropical hardwood forest), mangrove area and dunes. We chuckled at the Gumbo-limbo tree’s nickname. It’s known as the tourist tree because of its red and peeling bark, like the skin of sunburnt tourists.

Calusa Beach, at the south end of Bahia Honda Key, has a picturesque swimming area and sandy shore. The Old Bahia Honda Bridge, once part of the Overseas Railway, provides a scenic overlook of Calusa Beach. And the Sand and Sea Nature Center has an interesting collection of local sea life.

Key West is a 45-minute drive from Bahia Honda. We began our exploration of the area at Fort Zachary Taylor Historic State Park, home of America’s southernmost Civil War fortress. From this location, the Union Navy prevented supply ships from reaching Confederate ports. At one time the fort held 140 cannons and housed up to 600 soldiers. Some cannons are displayed in casemates, fortified rooms from which the cannons were fired. The brochure for the self-guided tour reminded us of the hardships endured during that time. In 1863, the fort commander reported he was losing fifteen men a day to yellow fever.

The beach at Fort Taylor is popular with snorkelers, beachcombers, kayakers and birdwatchers.

The only hardship at Fort Taylor today is deciding which of the many activities you want to enjoy. The beach is popular with snorkelers, beachcombers and kayakers. Bird watchers will enjoy the many species of native and migratory birds that frequent the area.

Not far from Fort Taylor is the Southernmost Point in the Continental US. Tourists line up to have their pictures taken by this marker, which is only 90 miles from Cuba.

After working up our appetites while in Key West, we walked along the Historic Seaport Boardwalk until we found a restaurant we couldn’t resist. We tried three different restaurants with open air dining. The fresh seafood, especially the oysters, was delicious.

Key West’s colorful history comes to life with tours of former residences of two of the city’s most famous celebrities, Ernest Hemingway and Harry Truman. Hemingway, a Nobel Prize winning author, lived and wrote in Key West in the 1930s. It was here he penned A Farewell to Arms, fished for giant tuna and marlin, and drank in Sloppy Joe’s Bar. Every July, Sloppy Joe’s keeps Hemingway’s memory alive with a Hemingway Look-Alike Contest. At the Ernest Hemingway Home and Museum, approximately 60 cats roam the grounds. About half of the cats are polydactyl, meaning they have extra toes. Some of them are descendants of a six-toed cat given to Hemingway as a gift.

Built in 1890 as a two-family residence to house officers assigned to the Key West Naval Station, the Truman Little White House has welcomed six United States presidents from William Taft to Bill Clinton. Taft stayed only one day, but Harry Truman used the facility as his winter White House for 175 days during 11 visits. The only place on earth Truman liked more than Key West was his hometown of Independence, Mo. On the Little White House Tour, knowledgeable tour guides tell visitors about the personal side of the Truman presidency. Discounted tours can be booked online. Visitors can take a self-guided botanical tour of the gardens for free.

Key West is well known for its gay and lesbian community. They were recently named “Best City for Unity Between Gays and Straights.”  Key West’s official motto is “One Human Family.”  The community celebrates with a five-day Key West Pride Fest, with a street fair, parade and dance parties. Pride Fest 2012 is scheduled for September 6th through the 10th.

Year round, toward day’s end, the crowds head to Mallory Square for the Sunset Celebration. Street performers juggle, sing, walk tight ropes and eat fire for tips. Jewelers, painters and photographers sell their creations. The star of the show is the sun as it sinks into the Gulf of Mexico.

When the shuttle launch was delayed again, we moved to the Jolly Roger Travel Park at Mile Marker 59 in Marathon. This turned out to be conveniently located near the Turtle Hospital and the Dolphin Research Center.

The Turtle Hospital, the only state-certified veterinary hospital in the world for sea turtles, helps these protected reptiles survive

The Turtle Hospital, the only state-certified veterinary hospital in the world for sea turtles, helps these protected reptiles survive. Their primary goal is to rescue sick or injured sea turtles, rehabilitate them, and release them back into the wild whenever possible. Sea turtles sometimes get tangled in fishing line, ropes or nets, get hit by boat propellers, or develop intestinal impaction from ingesting plastic bags that look to them like jelly fish. Sick or injured turtles float on the surface, unable to dive for food. In a typical year as many as 70 sea turtles are rescued.  To date, more than 1000 have been released into the wild. If you see one floating, call the Florida Fish and Wildlife Conservation Commission at 888-404-3922.  You could have a handsome 300-pound loggerhead named after you since the rescued turtles get named by the people who find them.

Visitors take a dip with dolphins at the Dolphin Research Center in Marathon.

The goal of the Dolphin Research Center is “to promote peaceful coexistence between marine mammals and humans…” If success is measured by human laughter and dolphin squeaks, it’s easy to hear how well it’s working. You can stand back and watch trainers work with dolphins, or you can get involved through their interactive programs. The ultimate dolphin experience is to be a trainer for a day at a cost of $650.  If you just want to shake flippers, you can do that for $25 above the admission fee.

Key Colony Beach Golf Course, a short par-3 course, was another pleasant surprise. Located near Mile Marker 53.5 in the Middle Keys, it was uncrowded and affordable, just $21 for 18 holes. Not only were we able to play at our own pace, I had time to photograph the flowering Royal Poincianas trees on the golf course without holding anyone up. These trees are noted for their fern-like leaves and flamboyant display of flowers.

This Royal Poincianas tree on the Key Colony Beach Golf Course was in full bloom.

We couldn’t leave the Keys without spending some time on and in the water. We rented a canoe to paddle the Long Key Lakes Canoe Trail. We followed a self-guided tour through a shallow-water lagoon. Because the water is so shallow, canoes can only be taken out at high tide.  We saw egrets, herons and warblers during our hour on the lake. Call the park at 305-664-4815 to find out the best time for canoeing.

Long Key State Park has 60 campsites with electric and water hookups that face the Atlantic Ocean.  Ocean breezes keep you cool and keep bugs away. If this sounds like your idea of paradise, call Reserve America for reservations, 800-326-3521.

Our last hurrah in the Keys was a snorkeling trip to John Pennekamp Coral Reef State Park in Key Largo, America’s first undersea park. We took a boat out to the living, shallow-water coral reefs of the Florida Keys National Marine Sanctuary. These reefs are home to over 260 species of tropical fish and around 80 species of coral. We saw multi-colored parrotfish and huge globes of brain coral.  In my imagination the undulating sea fans were waving goodbye, and I’d like to think, also waving us back for another visit.