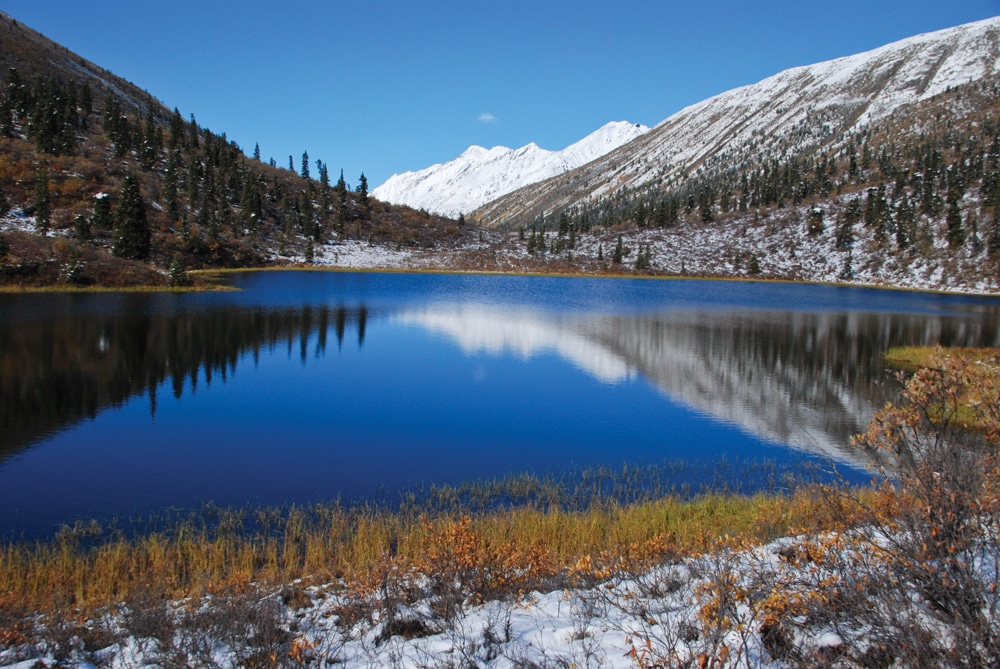 For More Information and a Free Guidebook, Click Here!

The Richardson Highway, a 366-mile route from Fairbanks to Valdez, Alaska, is both destination and journey. This historic motorway cuts through the southeastern Alaskan interior to Prince William Sound. Over a century ago, gold prospectors followed the route in hopes of striking it rich. Though the only gold you’ll likely find today occurs in September when the fall foliage is at its most vibrant, the trip is a goldmine of jaw-dropping views, historic sites and outdoor opportunities.

The Richardson Highway cuts through both the Alaska and Chugach Ranges as it heads south to the sea. Along the way, you’ll see endless acres of Alaskan wilderness. You’ll peek at the famous Trans-Alaska Pipeline. You might have to brake for Dall sheep or caribou, and you’ll find the expansive glaciers as fascinating as the small seals that spy on you from the gray-blue water of Valdez Harbor. If Alaska is on your life-list of places to visit, a drive down the Richardson Highway will immerse you in both the inland and coastal life and landscapes of the state appropriately nicknamed The Last Frontier.

The Richardson Highway, which is Alaska Route 2 from Fairbanks to Delta Junction and Alaska Route 4 from Delta Junction to Valdez, is Alaska’s oldest overland road. Originally cut in 1898 by the U.S. Army as a pack trail to its fort at Eagle on the Yukon River, the route also gave prospectors during the Klondike gold rush a way to travel from Valdez to this remote mining town. After the short-lived gold rush ended in 1902, the U.S. Army Signal Corps installed a telegraph line along the trail as part of the Washington-Alaska Military Cable and Telegraph System (WAMCATS). The line was a vital communication link for both military personnel and civilians in this sub-Arctic outpost.

An important artery into Alaska’s interior, in 1910, the government upgraded the trail to a wagon road. General Wilds P. Richardson oversaw the construction of the road which now bears his name, filling work crews with destitute prospectors. Employment allowed many of these disappointed transients to earn enough money to return home.

During the 1920s, the Alaska Road Commission improved the Richardson Highway to accommodate automobile travel, though it was still unpaved. To fund the upgrade and to maintain the road, commercial vehicles paid $175 or more at the ferry crossing over the Tanana River in Big Delta. The highway was finally paved in 1957, two years before Alaska became the 49th state.

Today, the route is toll-free, and there’s a bridge over the Tanana River, but don’t be fooled by the word, “highway” in the name Richardson Highway. No one rushes on this two-lane road. Though it’s in good condition with wide shoulders, you need to watch for “frost sinks,” where the permafrost has softened during the summer months and causes the pavement to sag. There’s also much good to see along this designated scenic byway.

The Richardson Highway begins in Fairbanks, Alaska’s second largest city with roughly 32,000 residents. The city was founded by a gold prospector, riverboat captain and shady entrepreneur named Elbridge Truman Barnette, who also served as the first mayor. In the spirit of Captain Barnette, you can take a cruise on the Chena and Tanana Rivers aboard the Riverboat Discovery which includes stops at an authentic Athabascan Indian village and the home of Susan Butcher, four-time winner of the famous Iditarod dogsled race.

To get a sense of Fairbanks during the gold rush, it’s worth a visit to 44-acre Pioneer Park located next to the Chena River. The park opened in 1967 in celebration of the centennial anniversary of the Alaska Purchase. Among its many historical artifacts and cultural exhibits, it contains 35 restored gold rush-era buildings; the SS Nenana, a 230-foot sternwheeler, the second longest wood-hull ship in existence; and the “Harding Car,” a Denali observation car used by President Warren Harding in 1923.

As you head south from Fairbanks, the Richardson Highway follows the Tanana River, which parallels the west side of the road, with the Trans-Alaska Pipeline on the east side. The pipeline transports crude oil from Prudhoe Bay to Valdez across frozen tundra, three mountain ranges and three major earthquake faults. Normally a pipeline would not be considered a tourist attraction, but given the controversy in the mid-1970s around the building of this $8 billion, 800-mile-long pipe, it’s a must-see. That said it’s a rare sight from the road. One of the only clear views of it is about 86 miles south of Fairbanks where it is suspended across the river.

At Delta Junction, 96 miles south of Fairbanks, the Alaska Highway (Route 2) to Tok departs to the southeast, and the Richardson Highway becomes Route 4. A few miles south of Delta Junction, the road passes Fort Greely, a strategic air defense field during World War II that became one of the army’s cold-weather training and test centers. The area has temperatures as cold as -69 degrees during the winter. Today, the fort is used by the Alaska National Guard as a ballistic missile defense site.

Just past mile marker 118, you’ll find another good spot to view the pipeline where it travels above ground to the horizon. If you miss the turnout, don’t sweat it, the rest of the trip is all about the views, though not of the pipeline. As civilization disappears, you begin to grasp Alaska’s superlative size and endless wildlands while the dramatic Alaska Range dazzles you with its hanging glaciers and towering peaks.

It’s worth planning a dinner at The Lodge at Black Rapids across from the Black Rapids Glacier. Nicknamed the Galloping Glacier because it advanced three miles during the winter of 1936-37, the Black Rapids Glacier is now retreating. The glacier’s namesake lodge, a modern hand-hewn post-and-beam inn on a hillside above the original log roadhouse serves succulent native salmon fare and entertains travelers with readings by local authors. The original lodge was a stop for weary prospectors and a purported brothel. It’s now on the National Register of Historic Places. The innkeepers, Michael and Annie Hopper, are restoring it with the help of a grant from the Alaska Department of History and Archeology.

From the Black Rapids Lodge, the Richardson Highway climbs gradually to the top of Isabel Pass. At an elevation of 3,210 feet, it’s one of the highest points on the Richardson Highway. Numerous pullouts beckon you to stop, but wait until you reach Summit Lake at the top of the pass, which marks the start of the Copper River Valley. The southern side of the pass is dotted with lakes including Paxon Lake, Dick Lake, Meiers Lake and Gillespie Lake where you’ll find many options for waterfront camping though a swim will prove extremely chilly even in August.

If you need some coffee to warm up, 38 miles from Summit Lake, the Sourdough Roadhouse by Sourdough Creek, another wayfarer’s stop dating back to the gold rush, has smooth brew late in the day as well as fishing supplies and a small RV park. Cast a line as you sip some java, and you might hook an Arctic grayling or sockeye salmon.

Boats lined up in Valdez Harbor.

Glennallen is a gateway for 20,000-square-mile Wrangell-St. Elias National Park, North America’s largest and most glaciated national park with the highest concentration of mountains over 14,000 feet on the continent. Even if you don’t venture into the park, you can get a sense of its magnitude from the Richardson Highway if you stop at the visitor’s center in Copper Center. The visitor’s center has an authentic fish wheel used by native Alaskans to catch salmon. A small theater and exhibits of native arts, crafts and historic artifacts educate visitors about this enormous tract of public land.

Cruising down Richardson Highway at Thompson Pass capturing snow-covered mountains and green terrain is a real treat when taking this highly-suggested route.

Along the 20-mile stretch from Glennallen to the junction with the Edgerton Highway, Denali-esque peaks such as Mount Sanford, the sixth tallest peak in the United States (16,237 feet), Mount Wrangell (14,162 feet) and Mount Drum (12,010 feet) scratch the sky in the distance to the east draped by immense glaciers that tail off into crumbling talus and high mountain tarns.

As the Richardson Highway crests Thompson Pass, the last pass before Valdez, the Worthington Glacier, a national historic landmark, nearly flows over the road out of the Chugach Mountains. Though the Worthington Glacier has steadily retreated over the last 150 years, it remains one of the most accessible ice fields in North America. From the interpretive shelter, the one-mile Moraine Trail takes you even closer to the ice where you can observe the cracks and pools at the glacier’s terminus.

As you drop toward sea level from Thompson Pass, the landscape changes noticeably from mountain taiga to “Arctic rainforest.” The trees become taller, denser and greener. Just after mile marker 14, as you pass through lush narrow Keystone Canyon, three tall waterfalls including broad Bridal Veil Falls, cascade down to the highway.

Seeking adventure, the author takes a sea kayak out in Shoup Bay in Valdez.

Like the Trans-Alaska Pipeline, the journey down the Richardson Highway ends in Valdez, a port town at the end of a long fjord off Prince William Sound. Originally a place for fur traders, salmon canneries and where miners began their treks inland, Valdez is better characterized today as a place to view wildlife and explore coastal glaciers. Its harbor area is very RV-friendly. You can walk from your door onto a water-taxi, tour boat or sea kayak. Regardless of your choice of watercraft, you need to get on the water. Seals, sea lions, otters and whales are commonly seen in Valdez Bay throughout the summer. A three-mile arm off Valdez Bay into Shoup Bay is home to a famous Kittiwake rookery, where 20,000 of these a small gull-like birds come to nest on a cliffy island each summer and where you can cruise close to Shoup Glacier, but not too close as it calves regularly into the water.

A paddler views the Shoup Glacier in Valdez.

The Richardson Highway is a must for any Alaska-bound RVer. There are glaciers galore, and while other destinations such as Denali National Park and the Kenai Peninsula beckon visitors, none are as diverse and allow as complete a look into Alaskan geology, human and natural history, and frontier lifestyle as a journey down the Richardson Highway.

Open year-round, early June through mid-September is the best time to visit the Richardson Highway. Many campgrounds, traveler services and tourist destinations are closed periodically. Isabel and Thompson Passes may be closed due to snow.

• Travel with plenty of food, water and warm clothing, even during the summer.
• Bug repellent is a must.
• Bring an extra spare tire or two in case of a flat.
• Even if you have roadside insurance, you might not have a cell signal to make an emergency call or it might take several hours (or overnight) for help to arrive.
• If you are planning to hike, fish or do other backcountry activities, be sure to bring bear spray.
• Fill up your tank when you come to major road junctions. There are very few roadside gas stations.

Click here to see more photos from our Alaska adventure!