From the very first glance, the Minnie Drop screams Americana. This little travel trailer has a nostalgia-inducing look, even for those who weren’t around when today’s classic RVs were new. It’s easy to identify with what Winnebago is trying to convey visually, and even emotionally — who doesn’t see wood paneling on a vehicle and feel like all is right with the world? It harks back to a time when life was simpler (or at least we perceived it to be so), when you could hitch up the trailer to the family sedan and take off at a moment’s notice to find your next adventure. And when the word “Winnebago” was synonymous with “RV.”

The Minnie Drop 1790 has a spacious kitchen with a two-burner LP-gas cooktop and a sink with a high-arched faucet in front of a rear-facing window.

Winnebago has smartly capitalized on that by combining a retro look and modern elements in the Minnie Drop — formerly known as the Winnie Drop but part of a rebranding shift that changed trailer names from Winnie to Minnie. The pod-reminiscent trailer comes in eight colors with the Woody panel, two lengths (18 feet, 4 inches and 20 feet, 4 inches) and six floorplans, with five of those having a slideout. In addition, a special-edition Realtree camouflage graphics version is available in Hunter Green Noble Classic.

The Minnie Drop’s amenities vary with the layouts: five have queen beds, while one has bunk beds; four have U-shaped dinettes, while two have a traditional dinette; one has an exterior pull-out kitchen off the back end of the trailer; some have entertainment centers in the galley, while the bedroom TV swivels around for viewing in the galley in some models.

For our test, we stayed in the 20-foot, 4-inch 1790. We enjoyed the throwback impression while welcoming the Drop’s contemporary amenities, such as the blue LED awning light, which is placed against the exterior side wall so it can still illuminate the patio area even when the awning is retracted. Our RVing forebears weren’t able to extend those awnings with the push of a button, and having dealt with plenty of manual awnings ourselves, we sure liked that modern update.

The patio area was an enjoyable place to relax. The Jensen JWM6A stereo/DVD player inside included exterior speakers so we could enjoy music outside via the radio, CD or an iPod or smartphone. By downloading the jControl app for Apple or Android devices, we could control the stereo and stream content while lazing under the awning. There’s an exterior 120-volt AC outlet at the rear edge of the trailer, and an exterior shower is tucked in a panel near the front on the streetside. 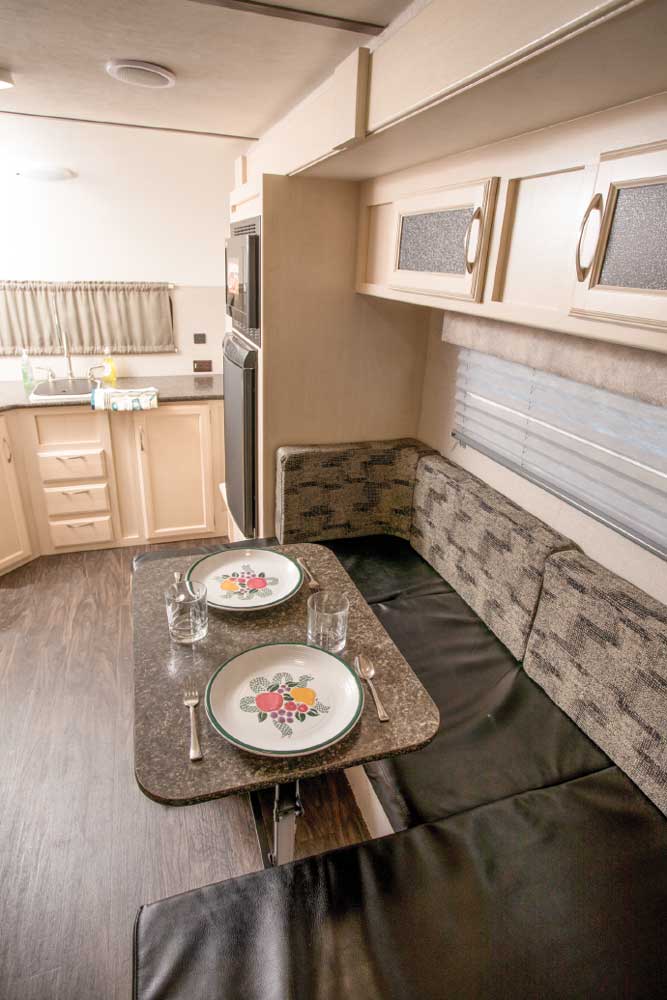 The U-shaped dinette has a pull-out folding table with
roomy cabinets above and underneath the seats.

Construction is, of course, also contemporary, with its 5⁄8-inch five-ply tongue-and-groove plywood floor, aluminum frame, block-foam insulation and gel-coat fiberglass exterior, as well as square-tube-welded rubber-torsion axles. The manual-crank stabilizing jacks were a breeze to deploy and retract. The pass-through storage at the front of the Drop is roomy and lighted.

Inside, the look is as clean as the outside. Just as we appreciated the respite from Winnebago’s usual “swoosh” graphic on the Minnie’s exterior, we liked the interior decor that was free of abstract, artsy patterns in dark colors. Light-colored walls and cabinetry blend with fabric valances around the windows and mossy-green curtains, dinette back and bedspread. The countertop and dinette seats are black with brown swirled in, but only as an accent that doesn’t dominate the color palette. The wood-pattern laminate floor is easy to keep clean. Overall, the combination made for quite a pleasant environment.

An integral part of a pleasant interior is lighting. While the small windows over the bed, dinette and kitchen sink don’t allow for much natural light, Winnebago made up for that with several in-ceiling LED fixtures — five along the center of the unit plus another in the bathroom. The flaw with those, though, is the brightness — they were all very bright, as LEDs tend to be, and there is no dimming feature. Apart from the TV on the wall next to the bed, there was no muted lighting. We’d like to see that addressed, and it wouldn’t hurt to enlarge the windows, too. The blinds could also be a little more opaque for better privacy.

We did like that the kitchen window was above the sink, allowing for natural light when preparing a meal. In fact, we appreciated that the kitchen is placed at the rear, rather than midship, with a large countertop space. It’s well-appointed with a two-burner range, a cover for the single-basin sink, a convection/grill microwave and a 3-cubic-foot refrigerator. The range worked fine for our needs, and the refrigerator was handily placed.

For me, the refrigerator is one of the most important elements in an RV because it’s one of the things that gets used most. It kept all of our items cold, despite the heat outside, and the freezer has its own compartment, so frozen items stayed that way without affecting the refrigerated items, and vice versa.

It was also spacious with room for a gallon of milk — always a benchmark for folks who like their breakfast cereal and coffee at all times of the day.

Because of the sloped shape of the trailer’s back end, there aren’t any overhead kitchen cabinets, but the two under-counter cabinets are quite roomy, with a set of three drawers for silverware and such between them.

I would like to have racks or pegs on the side walls, but you can certainly add things like that yourself. There’s also a big food pantry with shelves to the right of the entry door that I used to store clothing and extra linens.

Placing the kitchen at the rear keeps the main living area more open, with all the spaces dedicated to their own purpose rather than split up, making the Drop feel more spacious than a unit this size often does.

We were impressed with the amount of storage in the Minnie Drop. Apart from the spacious kitchen and pantry, there’s cabinetry over and under the dinette, as well as a wardrobe between the bed and bath for hanging clothes, plus drawers below. Larger items will need to be stored underneath in the exterior storage or in the tow vehicle, but there was plenty of room for everyday sundries, and then some.

The U-shaped dinette contributes to the Drop’s spacious feel, but we weren’t sure about how much we liked using it, functionally speaking. Being used to traditional dinettes, it took time to get used to. The table, which fits so snugly in the cutout, had to be pushed out completely every time one of us got up from the wall side. Then we had to push the table back in to make room to get around it in the aisle. Additionally, the vinyl seats started to sag where we sat the most often after just a few days. The cushions will need to be made firmer by the manufacturer or replaced by the user if they’re meant for long-term use.

When it was time to put work away and get some shut-eye, the queen bed at the front did the job. “Landlocked” beds like this — walled in on three sides — aren’t our preference, but this one felt roomy, and there was an overhead shelf for a little extra storage, as well as a small bedside ledge. The comfortable mattress was a pleasant surprise, and we slept well on it without needing a mattress pad or other enhancement. There were also handy electrical and USB outlets. 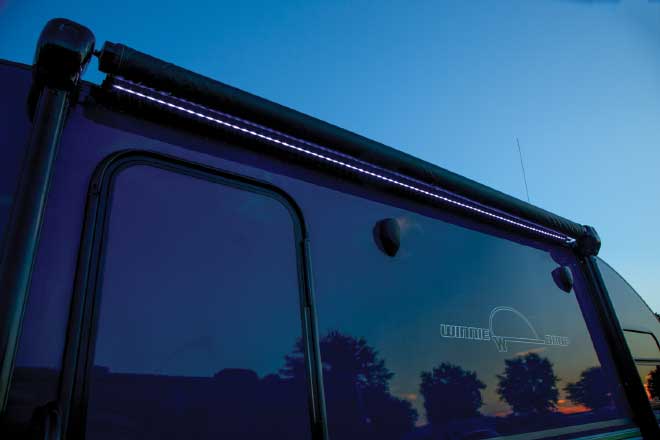 Outside, the awning lights are set against the side wall for illumination at night, even when the awning is retracted.

That brings us to the bathroom, which is placed in the center of the 1790 on the curbside. In smaller RVs like this one, sacrifices must be made somewhere, and it’s simply a matter of finding a floorplan that makes sacrifices you can live with. With the Minnie Drop, that’s manifested through a wet bath — a toilet and shower combination — in four of the six floorplans. This means work-arounds such as removing the toilet paper from the room before using the shower, and drying the floor and fixtures after a shower and replacing the toilet paper before doing your business.

Even so, not all wet baths are created equal. Here, the bathroom door didn’t go all the way to the ceiling — good for releasing shower steam, but it allowed some water to escape while showering — and the door itself was tough to latch. The dimensions are especially small, even for a combination space like this. There isn’t much room for use of either the shower or toilet, even for shorter users, and the ceiling topped out at 6 feet. There was no mirror in the bathroom (or anywhere at all in this trailer), so we didn’t have one to use for shaving, brushing hair or applying makeup. Plus, any use of the sink, such as washing hands and brushing teeth, required using the showerhead, the only water outlet.

Overall, the Minnie Drop is a great-looking travel trailer with just the right mix of modern amenities and bygone ambience. The Woody graphics on this test unit are an option, and there’s a very long list of features that come standard on all Minnie Drops. If you’re interested in a lightweight travel trailer with a compact floorplan that offers
a lot of must-haves, the Drop is worth a serious look.