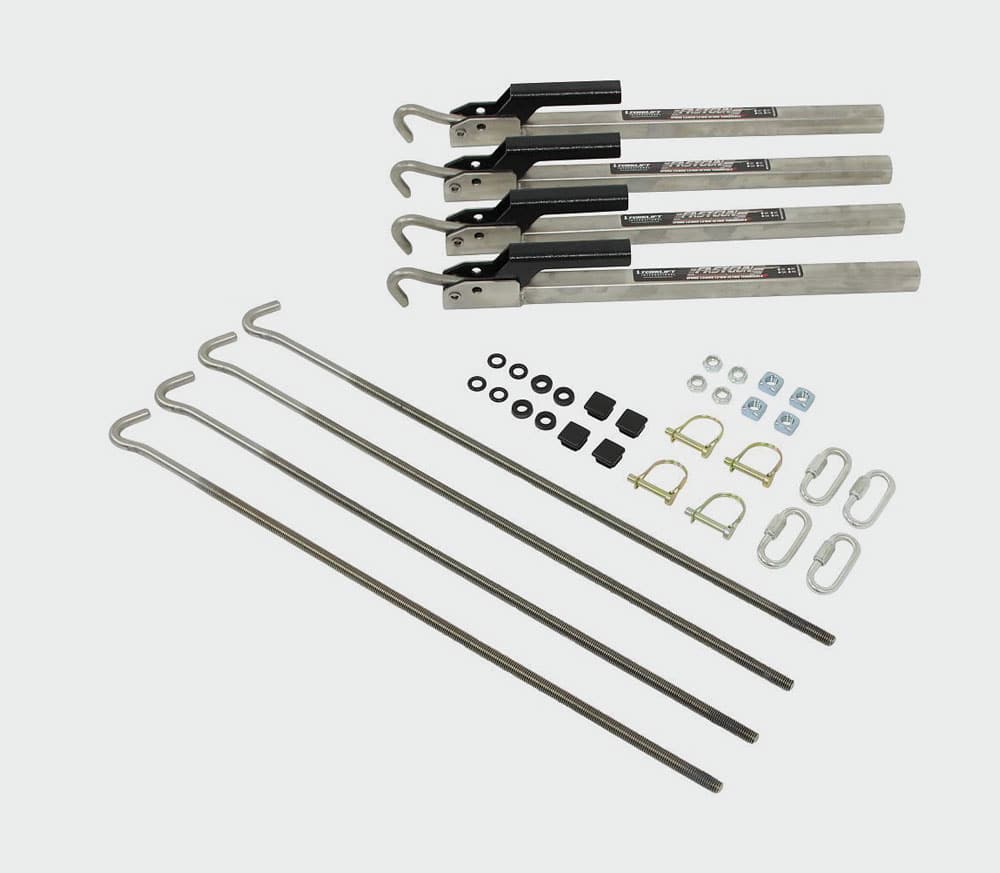 Whether you’re driving on the interstate or traveling down a dirt road to your favorite fishing hole, a properly secured truck camper is a must. To accomplish this, truck campers come with four attachment points built into their frames — usually a metal plate with a hole in it or an eyebolt. Corresponding anchor points, called tie-downs, are installed on the pickup, and turnbuckles or other hardware secure the truck and camper at these points.

Torklift International makes a popular truck-camper tie-down system that uses brackets attached directly to the truck’s frame, the safest method for securing a truck and camper. For trucks built after 2001, installation requires no drilling and utilizes existing holes in the vehicle’s frame. Older trucks and those with aftermarket hitch receivers may require drilling.

To evaluate how Torklift’s frame-mounted tie-downs install and perform, we attached a set on a 2012 Ford F-350 diesel-powered 4×4 with a regular cab, 8-foot bed and off-road package, and completed the project using the lift at Diamond RV Centre in West Hatfield, Massachusetts. Ordering the right tie-downs was easy using the Find Your Fit automated tie-down application guide on the Torklift website. Installation was straightforward with the provided manual, although we found some details in the black-and-white pictures difficult to see. A phone call to the tech-support number on the manual’s cover turned up online instructions with color pictures that were easier to follow.

The front of the truck frame on the passenger’s side was readily accessible, and installing that tie-down was a breeze. U-shaped mounting brackets were slid onto the top and bottom of the C-channel frame (Torklift refers to these as “hook brackets”). A third bolt was inserted through a steel reinforcing plate and then through an existing hole in the frame.

Installation on the front driver’s side was more difficult because the fuel tank blocked access to the inside of the frame. The fuel tank was protected by a metal shield, and several bolts held the tank shield to the frame. These were removed, allowing the shield to hang out of the way.

The remainder of the driver’s-side installation was similar to the passenger’s side. Hook brackets were used on the top and bottom of the frame, and a bolt was placed in an existing hole in the center of the frame. Due to the design of the tank on this particular truck, one of the hook brackets that came with the kit wouldn’t fit. A call to Torklift’s engineering team with some photos and additional measurements was all it took to get a redesigned bracket shipped out at no charge.

Because of the location of the fuel tank, the center bolt and reinforcement plate could not readily be inserted through the inside of the frame, so Torklift provided a special tool called a bolt fisher. As the name implies, a bolt fisher is a length of thin, rigid wire that is coiled at one end and used to pull, or “fish,” a bolt through a hole. Leaving the fish wire attached until a nut is installed ensures that the bolt can be retrieved easily if it falls back into the frame.

The parking-brake cable had to be relocated to avoid the newly installed tie-downs. This was easily accomplished with a supplied emergency-brake bracket. The fuel-tank shield was reinstalled as the final step for the driver’s side.

Because the F-350 had an aftermarket hitch receiver, holes had to be drilled in the hitch-receiver side plates to install the rear tie-down receivers. If the truck had the factory hitch receiver, we could have used a kit that mounts directly to the truck frame without drilling.

The tie-down receivers fit perfectly, with plenty of clearance for the exhaust tailpipes. Each tie-down insert was slid in place and fastened with an R-clip. For added security and to prevent theft, Torklift offers tie-down locks that replace the R-clips. They come in a package of four with all locks utilizing the same key.

To put the new tie-downs to the test, a 2017 Northstar 9.5 Igloo U was mounted on the F-350, courtesy of Truck Camper Warehouse in West Chesterfield, New Hampshire. Bill Penney, the dealership’s owner, recommends using a rubber mat to protect the truck bed and the bottom of the camper. Spray-in bed liners contain rubber and can be used, but Penney prefers rubber mats. Torklift advises against plastic bed liners that may result in horizontal movement or materials that might compress under the weight of the camper and cause vertical movement. Mounting the seven-way receptacle in the bed is recommended to keep the rear connection free for trailer use.

With the truck camper loaded in the bed, it was time to install the turnbuckles. Conventional installation is time-consuming and requires turning the center section of the turnbuckle until the necessary tension is reached, followed by tightening a locknut to prevent it from loosening. A length of chain makes up the distance between the turnbuckle and the tie-downs.

Torklift’s solution is the FastGun turnbuckle, a considerable time-saver. With FastGun’s quick-connect/disconnect feature, installation is simply a matter of moving the handle into the locked position and inserting a locking pin. The quick-release feature is particularly useful if the turnbuckle covers the pickup’s fuel-filler door. FastGun’s spring-loaded mechanism also mitigates sudden jolts, such as potholes and speed bumps, preventing damage to the camper frame or tie-downs during travel.

Assembly was not difficult but required several minutes of turning the threaded J-hooks and test fitting, followed by more turning until the correct length was achieved. After the initial setup, installing each turnbuckle takes just a few seconds. Hook one end to the tie-down and the other to the corresponding attachment point on the camper, pull the handle closed and install the pin. Labels should be marked to indicate each turnbuckle’s location — for instance, “DF” for driver’s-side front and “PR” for passenger’s-side rear.

We were impressed with the construction of the Torklift tie-downs and turnbuckles. Their ease of use made mounting a truck camper less of a chore. But most importantly, knowing that the camper was securely attached to the frame of the truck gave us peace of mind.

Torklift’s frame-mounted tie-downs have varying retail prices that depend on the application, with front tie-downs starting at $342.99 and rear tie-downs starting at $298.99. FastGun turnbuckles are sold in pairs that retail for $319.99. They come with a polished stainless-steel finish, like the ones we installed, or powder-coating in white or gray. Torklift also makes a lightweight military-grade aluminum-alloy tie-down system called Talon. Although these are more expensive than Torklift’s steel tie-downs, Talon tie-downs are lighter and won’t rust, a definite plus for those who live in areas where rust is a problem.