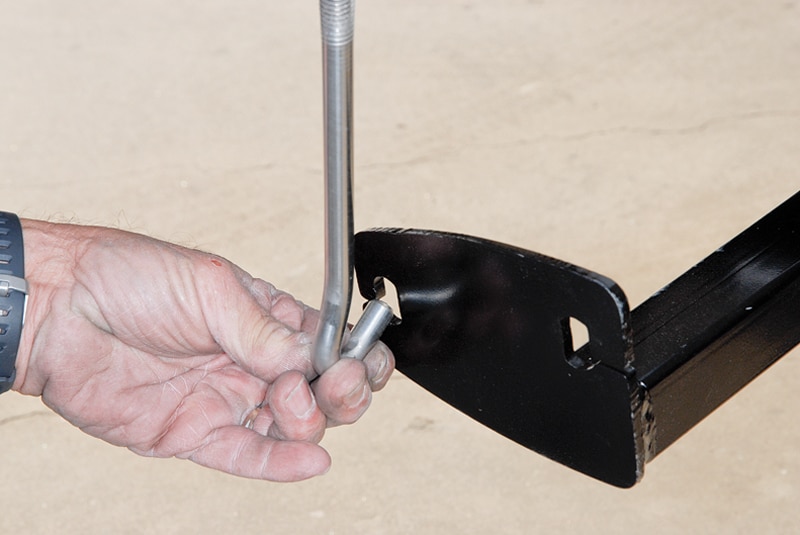 Pickup campers are versatile RVs, providing an amazing amount of livability for their size. Obviously, these campers (also known as slide-in or truck campers) are designed to mount in the bed of a pickup truck, although they can be easily unloaded for use independently of the truck and/or for solo storage. The key elements to making this happen are a good set of corner jacks and an appropriate tie-down system.

Ever since the slide-in camper was invented, the methods used to attach it to the bed of a truck have been fairly basic. The commonly used bed and bumper tie-downs have a pretty good track record, but a more secure and stable method is to use frame-mounted camper tie-downs like the ones designed and marketed by Torklift International.

To test the performance differences between the two tie-down systems, we enlisted a Dodge 3500 four-wheel-drive dually carrying a Lance 1161 camper. The almost 12-foot-long Lance is a formidable load for the truck, and the original bed-type tie-downs served the duo well for the past seven years. But the downside to this type of system is the bed, which is bolted to the frame, is relied upon for support, rather than the frame. If the bed moves, the camper moves with it, thus affecting stability. In what may be a subconscious process, the owner becomes acclimated to the handling characteristics of his particular combo and adjusts driving habits in order to be comfortable and safe on the road. In this case, the Dodge and Lance had their limitations, which, surprisingly, were marginally noticeable until the Torklift tie-downs were installed.

Attaching the tiedowns is easy, after the installation.

The original mounting system utilized a cross member that was bolted to the front of the bed with brackets on the ends that accepted the tie-downs. In back, the tie-downs were connected to brackets bolted on the ends of the bumper — not very stout, but standard operating procedure for many years. Torklift components are securely bolted to the side plates of the hitch receiver and front frame members.

Installing the tie-down brackets (MSRP for the rear, $240; the front kit is $272) is a fairly benign process with a few moments of frustration brought on while bolt fishing. Four holes are drilled into the hitch receiver side plates, and the arms are connected using grade eight bolts set with 40 ft-lbs of torque. It may be necessary to use a few half-inch flat washers (supplied with the kit) if the tie-down bracket interferes with the exhaust tailpipe.

The fronts require a little more head scratching before you figure out exactly where the brackets go, but you don’t have to drill. Part of the problem is due to the instructions, which could use some revision. The right side was easy, but the clearance to position the bolts through the bracket on the left was partially blocked by the gas tank. Fish wires were used to snake the bolts — a process that could make the installer’s language very colorful. The fish wire process eventually worked, but it would be nice to provide a couple of extras; we had to clean up the ends to reuse for subsequent attempts. Nevertheless, you’ll get the job done with some patience.

Once the brackets are in place, the Torklift Fastgun Turnbuckles ($232 for two in white) were assembled and installed between the camper and tie-down brackets. Unlike the standard type turnbuckles that require wrenches to install and remove, the Fastguns have locking levers that resemble a lever-action rifle. These levers load the internal springs that provide the right amount of travel while immobilizing the camper so movement in the bed is minimal. The action here is smooth and easy, requiring no tools once the turnbuckles are adjusted properly. 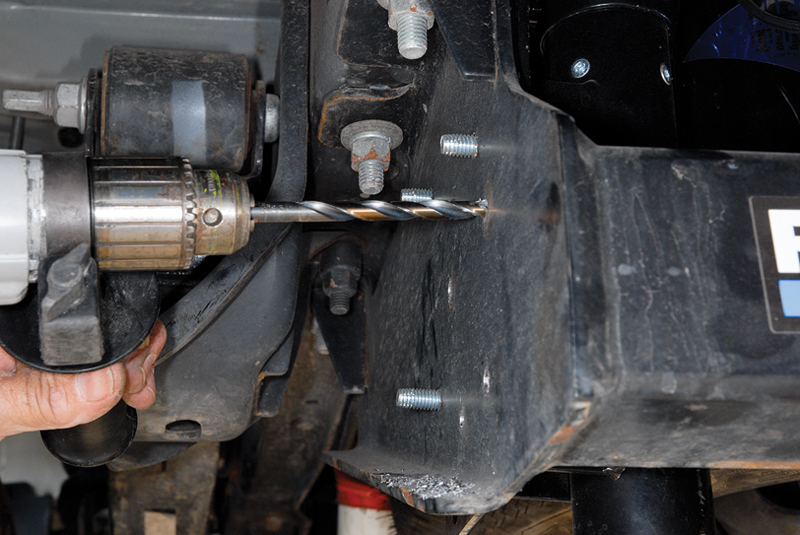 Installation requires a good drill and some patience.

Unfortunately, the instructions for the Fastgun Turnbuckles were also difficult to follow. After we muddled our way through the first one, the other three went smoothly. A simple procedure is used to adjust the length of the turnbuckle and once it’s done, each one is marked with respect to location for proper reinstallation after the camper is loaded. The optional, keyed-alike lever locks ($58) were used to secure the turnbuckles, rather than the factory pins.

Torklift’s tie-down system is not just a handsome addition to the camper and truck. While the choice of white, gray, polished or black finishes does make it easier to color match, the end result is impressive, aesthetically and from a practical standpoint. Handling improved dramatically, with most of the body roll eliminated when the camper became connected to the frame of the truck. The rocking sensation when entering driveways or turning corners was comparatively squelched. In camp, the rocking in concert to moving bodies inside the rig after installing the Torklift system was noticeably tempered. Overall the Torklift system improved drivability except on rough roads. Concrete highways with the notorious expansion joints and sections in need of repair made the ride rougher — certainly attributable to making the camper more rigid to the truck frame.

Unquestionably, the Torklift system adds a higher level of safety and handling, especially in adverse driving conditions. And the tie-down inserts can be removed (using locking pins) when the camper is unloaded from the truck for a more stock — and unobtrusive — appearance.