To the Brink and Back: Pinnacles National Park, California 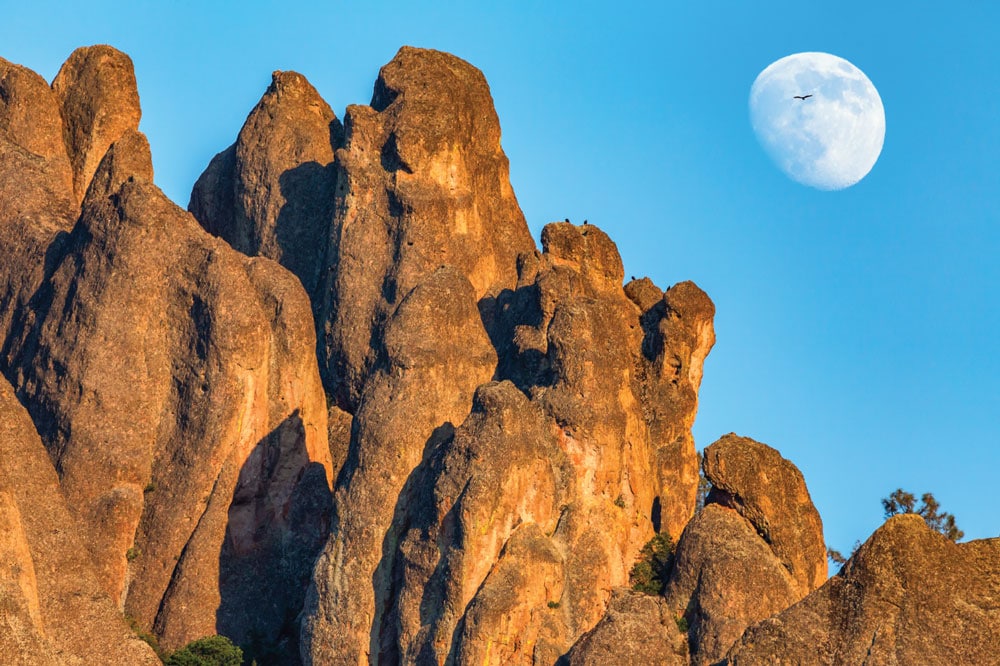 Pinnacles is one of America’s newest national parks, crowned in 2013 after a 105-year apprenticeship as a national monument. Like all national parks, it is a special place, sitting at the base of, and partially encompassing, the Gabilan Mountains east of central California’s Salinas Valley.

On a recent trip, several of us were sitting around a campfire one evening discussing the day’s adventures and trying to put into words our feelings about the park. My friend Stephen probably said it best; he called the place “spiritual.” Part of the reason for that is a feel-good story about an endangered species being carefully nursed back to viability, with Pinnacles being a key to that effort.

Approaching the park, we passed mile after mile of farmland and gently rolling hills, which eventually gave way to our first views of the modest Gabilan Range, topping out a bit above 3,000 feet. But soon we were glimpsing these strange-looking peaks jutting up from the hills, gnarly and generally barren of vegetation. It’s like some extraterrestrial craft had flown over the area carrying a huge load of volcanic rock and lost its grip, dropping the load in this pastoral area.

Actually, that’s not far from the truth. Scientists tell us the pinnacles began as part of a volcano that formed about 22 million years ago near Lancaster, California, almost 200 miles south of here. It was thought to be 15 miles long, 5 miles wide and 8,000 feet high. Over the millennia, tectonic activity (for which California remains famous) split the volcano in two and carried two-thirds of it northwest to its present location. Erosion and other geologic activities gradually made the pinnacles what they are today, a huge pile of volcanic rock scattered randomly among the gently rolling hills.

The park’s namesake spires are remnants of an ancient volcano that came to rest in the Salinas Valley of central California nearly 200 miles from where it originally stood.

So what does this mean for visitors? For one thing, all this activity has created two of the most interesting caves you will ever encounter. These caves were not scooped out of the earth but formed as large volcanic boulders piled up on top of each other, creating caves. In place of stalagmites and stalactites, Pinnacles has bats, several species of which roost year-round.

For many who revere the outdoors, there are too many stories of the decline and fall of majestic natural areas and the creatures that inhabited them. Dams block once-free-flowing rivers, to the detriment of native salmon and steelhead that can no longer migrate to their places of birth to spawn. Pollution fouls rivers and lakes. Nonindigenous varieties of flora and fauna decimate native species.

But why dwell on the negative when we can celebrate some victories? Consider, for example, the California condor. One would think that a bird afforded such an elite status would be an eminently pretty and lovable creature, maybe a western bluebird or an osprey. Something children want to have posters of on their bedroom walls. But, no. The California condor is a vulture. It makes its living burying its bald head in a rotting carcass and living off it. Never mind that this is a valuable service, not unlike the people who pick up your garbage and take it to the landfill. 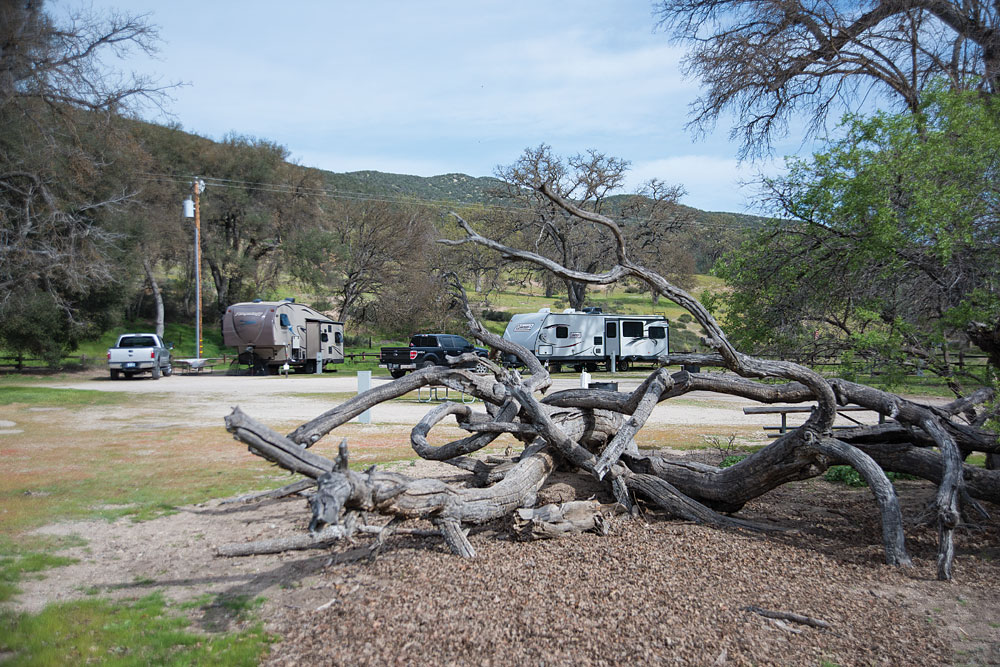 We have other birds that fill this need. Common turkey vultures look similar and do the same job. But not with the same style. They ride the thermals looking for dead meat, and, once located, descend with a flock of relatives and make it disappear in remarkably short order. But the turkey vulture has a wingspan of a mere 6 1⁄2 feet and needs to flap its wings frequently to remain aloft. It is also plentiful and regularly seen in much of the state.

The California condor is special. It has a wingspan of 10 feet, and can fly in excess of 50 miles an hour and hover at 15,000 feet. It can seemingly ride the thermals for hours without once flapping its wings. It routinely covers 100 miles in search of a meal. And it is critically endangered and was once on the brink of extinction. Its modest yet encouraging comeback is one of our triumphs here in the West.

The existence of a California condor flock is by no means the only reason to visit Pinnacles National Park, but for many, myself included, it adds a nice dimension; the story actually inspires me. In the 1980s, with the condor population hovering in the 20s, the state recognized the problem and instituted a breeding program whereby the few survivors were captured and bred in captivity (a controversial decision at the time), and the offspring were eventually released into the wild. 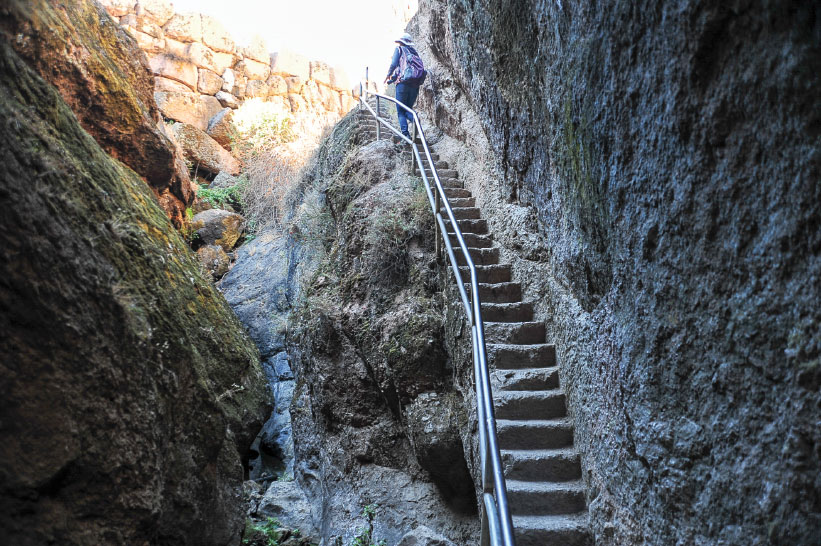 Many of the park’s 30 miles of trails were constructed by the Civilian Conservation Corps in the 1930s and are feats of engineering with narrow cave passages and rocky staircases.

Pinnacles is one of the few places that is an official release spot for these captive-bred icons, and as a result, many hang around the area for us to ogle, albeit usually from afar. At the park’s campground, two powerful telescopes are aimed at ridges where California condors like to float, and the big birds occasionally alight in the trees on the hillside. Almost everyone visiting the park carries binoculars or a spotting scope, and seemingly reasonable people are seen arguing about whether that large bird floating overhead is really a California condor or a mere turkey vulture. (See “Condor or Vulture?” below for tips on how to tell the difference.)

The 41-square-mile park has 30 miles of hiking trails, ranging from moderate to strenuous with elevation gains to about 2,000 feet. The popular High Peaks area has a sheer drop-off where hikers cling to a rail embedded in the rock — not for the faint of heart.

The amazing and nostalgic work of the Civilian Conservation Corps is evident everywhere in park structures and trails.

The national park’s trail map is excellent. Hiking trails are well marked, and many connect, so everyone can pick a comfortable distance and go home happy. I suggest hiking the High Peaks Trail, or shortening it by taking the eastern section to where it connects to the Condor Gulch Trail and ending at Bear Gulch. From the campground, a short walk leads to Bacon Ranch, a homestead with a house built in 1894 and several outbuildings.

The reddish rock that dominates the cliffs and spires of the High Peaks is a form of volcanic rhyolite called breccia.

By all means, hike through both caves, Bear Gulch and Balconies, if they are open; partial or full closures are possible to protect the bats and in response to storms and high water. The caves require that you carry a flashlight or headlamp, and you will need it. If you are a large person or are lacking in agility, you may find the caves, especially Balconies, to be a challenge, as in some cases you will be squeezing past boulders or crawling on your hands and knees with a flashlight in your teeth, if you aren’t wearing a headlamp.

A free shuttle on weekends and holidays takes visitors from the East Pinnacles Visitor Center to Bear Gulch, where a nature center and many of the trailheads are located.
National parks preserve and protect special places. Pinnacles is one of them. Joining the California Condor Recovery Program as a release and management site, the park currently has 36 of these magnificent birds that once could be seen across the American West. 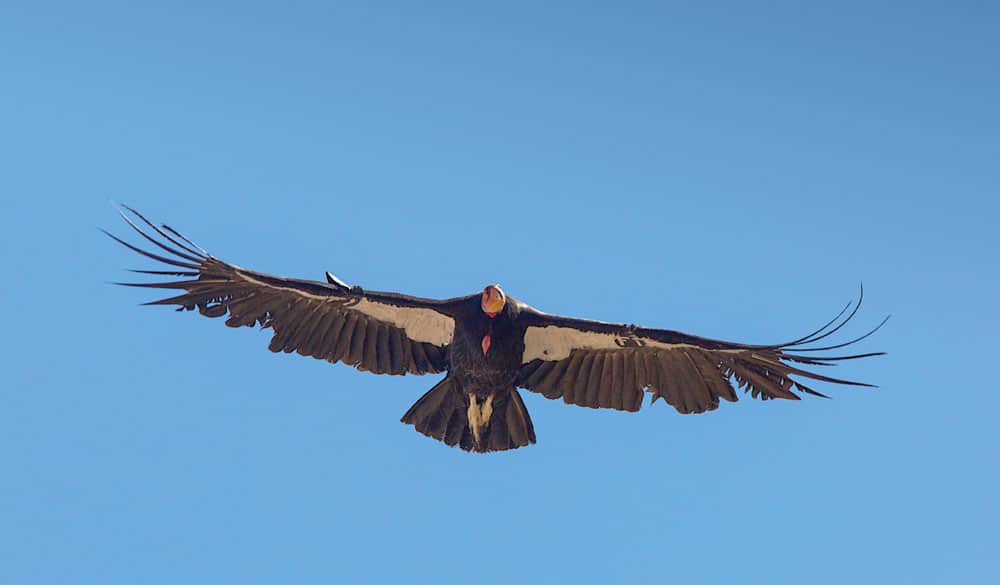 Pinnacles National Park is desertlike, and summer temperatures exceed 100 degrees with regularity, making early spring and fall the best times to visit.
The park has two entrances that do not connect. The west entrance is narrow, hilly and winding, and unsuitable for trailers. RVers and most other visitors will want to come in through the east entrance, easily accessed from State Route 25 south of Hollister.Just inside the east entrance, the park’s only campground is open year-round with 119 campsites — 37 with 30-amp electric hookups and 82 with water hookups only. If you would like electric hookups, try to reserve one of the following sites in Loop D: 90, 91, 95, 97, 100, 102, 103, 105 and 120. Some sites are pull-throughs, and maximum RV length varies from 16 to 90 feet.

Campground facilities include restrooms with flush toilets and fee showers, a dump station, an outdoor swimming pool (open April through September), and a convenience store with food and basic camping supplies. Potable-water faucets are scattered around the campground, but only one has a threaded hose bib for filling tanks.

The campground allows pets, but dogs must be leashed and are not permitted on hiking trails in the park. A Jack Russell terrier belonging to one of the park rangers disappeared under mysterious circumstances, with a mountain lion being the prime suspect.