Thrills and Chills in New York 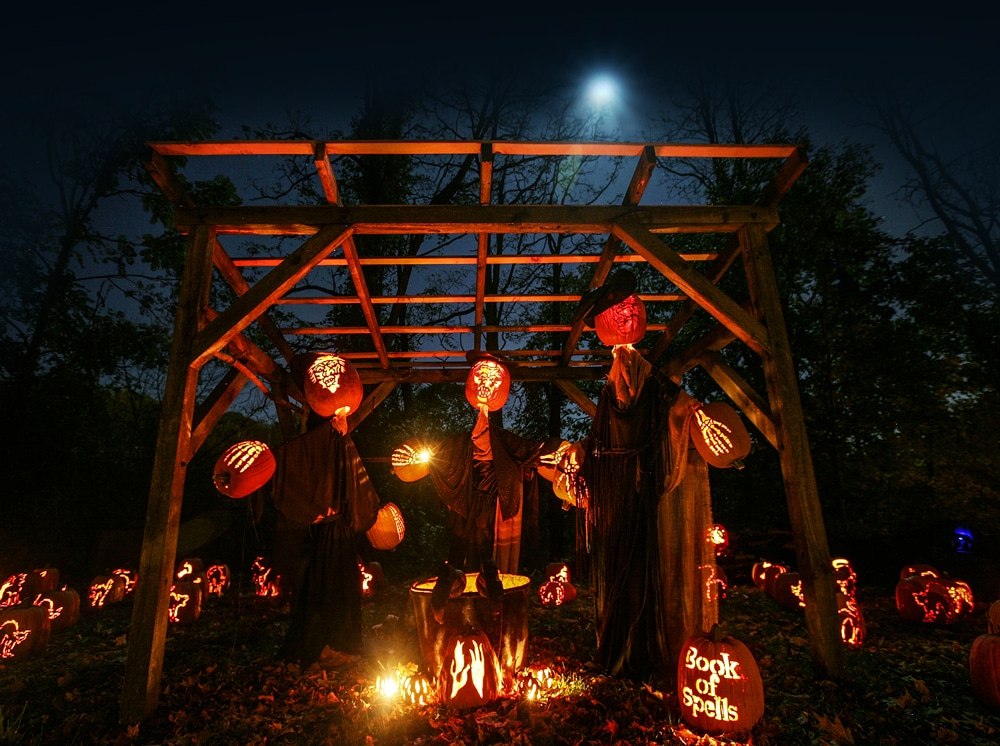 The little village with a big reputation, Sleepy Hollow gets spirited away each Halloween. This October bats will fly and heads will roll in the town made famous by Washington Irving’s ghoulish horseman

With Halloween drawing near, children and adults alike will be donning masks and makeup to portray scary creatures. But what could be better than a travel destination made famous by a person with no face — in fact, with no head at all? That would be Sleepy Hollow, New York, the setting for the famous Washington Irving story “The Legend of Sleepy Hollow.”
Oh, the place looks innocuous enough — a leafy village among the hills above the Hudson River. But at Halloween, Sleepy Hollow and nearby towns are among the spookiest yet most festive haunts anywhere.
In “The Legend of Sleepy Hollow,” Irving describes a bucolic valley settled by the Dutch in the 17th century, a place “that still continues under the sway of some witching power.” The dominant spirit that haunted the region, he wrote, was that of a headless horseman galloping along lonely roads late at night
in search of his noggin.

On the grounds of the 18th-century Van Cortlandt Manor is the Great Jack O’ Lantern Blaze with more than 5,000 hand-carved pumpkins.

Irving knew the area well. He bought a 1690s riverfront cottage in Tarrytown in 1835 and named it Sunnyside. “It is a beautiful spot,” Irving wrote, “capable of being made a little paradise.” Adding on to the house over the years, Irving lived at Sunnyside most of the remaining 24 years of his life and died there in his bed.
Today, guides in formal period attire lead tours of the lower level of the eclectic two-story home, through its narrow hallways, parlor, kitchen, dining room and study, which contains Irving’s desk and books. Outside, a veranda looks out on the venerable Hudson River and autumn foliage on the hills in the distance. Also outside is an icehouse with a peaked roof that has the look of a tiny gothic chapel. Off limits, unfortunately, is the adjacent four-story Spanish Tower, built after Irving returned from a five-year stay in Spain and influenced by the Alhambra in Granada.
On the tree-shaded 10-acre grounds, kids — and some adults — pose with cutouts of the Headless Horseman and Rip Van Winkle, another famous Irving character, with openings where they can insert their faces to complete the picture. Fake tombstones bear humorous inscriptions, and guides
regale visitors with the author’s creepy stories on walks along Sunnyside’s garden trails. Shadow puppet performances are staged on weekends throughout October.

Back in downtown Sleepy Hollow is Patriots Park, where Irving set schoolmaster Ichabod Crane’s midnight encounter with the horseman and his steed. The park owes its name to the capture there in 1780 of British Major John Andre and the revelation that he was working in cahoots with General Benedict Arnold to sabotage the American cause in the Revolutionary War. A bronze statue and plaque commemorate the capture. Andre was hanged nine days later in another town. Arnold fled and died two decades later in England.
On a ridge nearby is the Old Dutch Church, completed in 1697. It was here that the horseman always galloped back before dawn, Irving wrote. Inside are simple wooden pews, and a local storyteller gives dramatic performances of the Headless Horseman tale, accompanied by live organ music. Outside is the church cemetery, which Irving described as “a favorite haunt of troubled spirits.” Just beyond it is the much larger Sleepy Hollow Cemetery. At various times around Halloween, a rider cleverly cloaked to appear as the Headless Horseman sits astride a horse near the cemetery’s main entrance.
Real people inspired Irving’s characters, and as I walk through the hilly cemetery, I notice two tombstones with the name Van Tassel. Ichabod Crane was besotted by Katrina Van Tassel, an 18-year-old farmer’s daughter who was “plump as a partridge” and “rosy-cheeked as one of her father’s peaches.” Irving himself was buried here in 1859, and his weathered headstone is a big draw.
Sleepy Hollow Cemetery is the final home of a surprising number of the once rich and famous, among them industrial tycoon Andrew Carnegie, cosmetics queen Elizabeth Arden, labor leader Samuel Gompers and William Rockefeller Jr., who with his brother, John D., founded Standard Oil. A marvelous Rockefeller mansion nearby is open for tours (see “What Else to See” below). For the really brave, there are evening lantern tours of the cemetery and the tomb of Queen of Mean hotelier Leona Helmsley.

Blacksmiths still practice their craft at Van Cortlandt Manor, just as they did 250 years ago. Photo by Brian Haefelle/Historic Hudson Valley

The truly chilling event in Sleepy Hollow is Horseman’s Hollow. This is a month of weekends in which visitors wander among the macabre, the insane and the dead at Philipsburg Manor, the authentic remnants of a 17th-century Dutch colony. It’s intense enough and so skillfully done that you should think twice about taking younger children — recommended ages are 10 and older. Organizers also advise that it’s not suitable for adults who are claustrophobic, have heart or respiratory conditions, are prone to seizures or have other chronic health conditions.
Being in reasonably good health, my friend, Rhonda, and I take the risk. We walk along a long tree-lined path illuminated only by candles, expecting somebody to jump out suddenly from the shadows. Nothing. But in the distance we hear guttural noises and demented lullabies and see an old house bathed in purple light. As we walk through the entrance, we begin an unsettling journey through a winding corn maze toward the old manor. Ghoulish women and ghastly men walk up to us and other visitors, babbling insanely or staring, mute and menacing. None of them touches us, and none will. Nor are we permitted to touch them.

Philipsburg Manor, built more than 300 years ago, is the site of Horseman’s Hollow, the creepy gathering of ghouls.

Ghouls lurk everywhere. Many are real-looking mannequins. Others are actors in amazing makeup who startle everybody when they move. There also are severed limbs, ethereal ghosts and a hologram of an eerie woman pleading for help.
We continue walking through the corn maze. A stalk rustles. Was it a maniacal freak lurking on the other side or a visitor brushing against it? We stop at one spot on the trail and stare at a tall, motionless figure with a black shroud concealing his face. Rhonda approaches for a closer look at what she assumes is a mannequin. He lurches toward her. She screams, genuinely startled. Later, a zombielike young woman growls at Rhonda after approaching within inches of her. Rhonda quickens her pace. “I’ll see you under your bed tonight,” her new friend hisses. Fortunately, she did not.
This year’s Horseman’s Hollow is scheduled for the evenings of October 4 and 5, 10 to 12, 17 to 19, 24 to 26, and 31 to November 1. Advance tickets are required, and the event sells out quickly. Tickets are $20 to $25; call 914-631-8200 for information.

Kykuit, the century-old estate that was home to four generations of Rockefellers, boasts hilltop views of the Hudson River, works of art and vintage automobiles.

A less frightening but equally spectacular event is the Great Jack O’ Lantern Blaze, 9 miles north in Croton-on-Hudson. Visitors walk the grounds of Van Cortlandt Manor, an 18th-century riverside home, and view more than 5,000 illuminated jack-o’-lanterns, hollowed out by volunteers and local artists. Their finished products include dinosaurs, serpents, gourd-filled jack-in-the-boxes that spring up and even a working doomsday grandfather clock, all accompanied by an original soundtrack of dramatic music and synchronized lighting. This year’s event is October 4 and 5, 10 to 13, 16 to 19, 23 to 31, November 1 and 2, and 6 to 9. Advance tickets are required, and sellouts are common.
Elsewhere in and around Sleepy Hollow at Halloween, you’ll find parking meters with cornstalks and scarecrows attached to them. Pumpkins perch on doorsteps, hay bales and fences. Colorful autumn leaves cling to the trees, and haunted hayrides and other Halloween-themed activities take place. It would all be cheesy if it weren’t done so well.

What Else to See

The greatest baseball player, Babe Ruth, is buried here in the town of Hawthorne, 6 miles from Sleepy Hollow. His grave marker features a tall sandblasted image of Jesus placing an arm around a young ballplayer. Nearby is the grave of Yankee player and manager Billy Martin. James Cagney
is another notable interred here. And at Kensico Cemetery
1 mile away in Valhalla, Ruth’s Yankees teammate, Lou Gehrig, is buried, as are Anne Bancroft, Tommy Dorsey, Danny Kaye and Soupy Sales.
914-769-3672 | www.gateofheavenny.com

As Halloween draws near, visitors may see the Headless Horseman lurking at Sleepy Hollow Cemetery. Photo by Larry Keller

Kykuit is Dutch for “lookout,” and this 101-year-old estate, home to four generations of Rockefellers, sits on a hill overlooking the Hudson. Group tours provide peeks at some of the 40 rooms and the grounds. In the home’s great room are centuries-old statues from the Tang dynasty. The basement passes through a fine art gallery with works by Picasso, Warhol and others. Vintage coaches, wagons, harnesses and saddles are displayed in the former stables, and classic cars reside in a garage.
914-631-8200 | www.hudsonvalley.org

There’s nothing ominous during the day at Horseman’s Hollow on the grounds of Philipsburg Manor. Instead, you stroll through what was a thriving farming, milling and trading center three centuries ago, including the manor house, a working gristmill,
a barn, a dairy and a river wharf. Tours tell the story of both the family of Anglo-Dutch owners and their workers, two dozen African slaves. Hands-on activities include threshing wheat and working flax into linen.
914-631-8200 | www.hudsonvalley.org

Near Kykuit is this handsome but unpretentious stone church, notable because the Rockefellers commissioned nine stained-glass windows from Marc Chagall and one from Henri Matisse. The rose design Matisse window was the artist’s last work before his death in 1954. It memorializes Nelson Rockefeller’s mother, Abby Aldrich Rockefeller, one of the founders of the Museum of Modern Art. The Chagall windows honor various other family members.
914-631-2069 | www.ucph.org

Battle Row Campground
On eastern Long Island, 48 miles from Sleepy Hollow in Old Bethpage, Battle Row inhabits a shaded, wooded and quiet area surrounded by a preserve. The campground has 30- and 50-amp sites and restrooms with private showers. It’s pet-friendly and is near shops and restaurants.

Beaver Pond Campground, Harriman State Park
Located 19 miles northwest of Sleepy Hollow in a wooded 46,000-acre state park in Pomona, Beaver Pond accommodates a dozen RVs up to 34 feet. No hookups, but there are bathrooms, showers and a dump station. The campground stretches out beside Lake Welch, one of 30 lakes in the state park, which also has more than 200 acres of hiking trails. No pets.
800-584-2906
www.nysparks.com | www.reserveamerica.com

Black Bear Campground
About 45 miles from Sleepy Hollow in the village of Florida, Black Bear has 150 RV sites with water, electric, sewer, Wi-Fi and TV hookups. The campground provides bathrooms, two coin-op laundries, a store, a game room, a pool and a small mini-golf course. Limit of two pets — no pit bulls, Rottweilers or Dobermans. Guided tours of New York City, 46 miles away, are available.
845-651-7717 | www.blackbearcampground.com

Croton Point Park
Sitting on 500 acres overlooking the Hudson, 8 miles north of Sleepy Hollow, this county park campground has 71 sites providing 30- and 50-amp service, dump stations, hiking trails, a beach and access to 4 miles of riverfront. A nature center has exhibits about local history, flora and fauna, and there’s a restroom, plus maps and visitor information. Pet-friendly (limit of two animals).
914-862-5290 | parks.westchestergov.com

Liberty Harbor RV Park
Fifty spaces accommodate RVs at this Jersey City, New Jersey, site, 33 miles from Sleepy Hollow, with water and electric hookups, showers, a laundry room, Wi-Fi and a restaurant on the premises. Pet-friendly, open year-round and with views that extend to the Statue of Liberty and Ellis Island. Daily bus tours take sightseers to Manhattan, and there’s easy ferry and subway access.
201-516-7500 | www.libertyharborrv.com