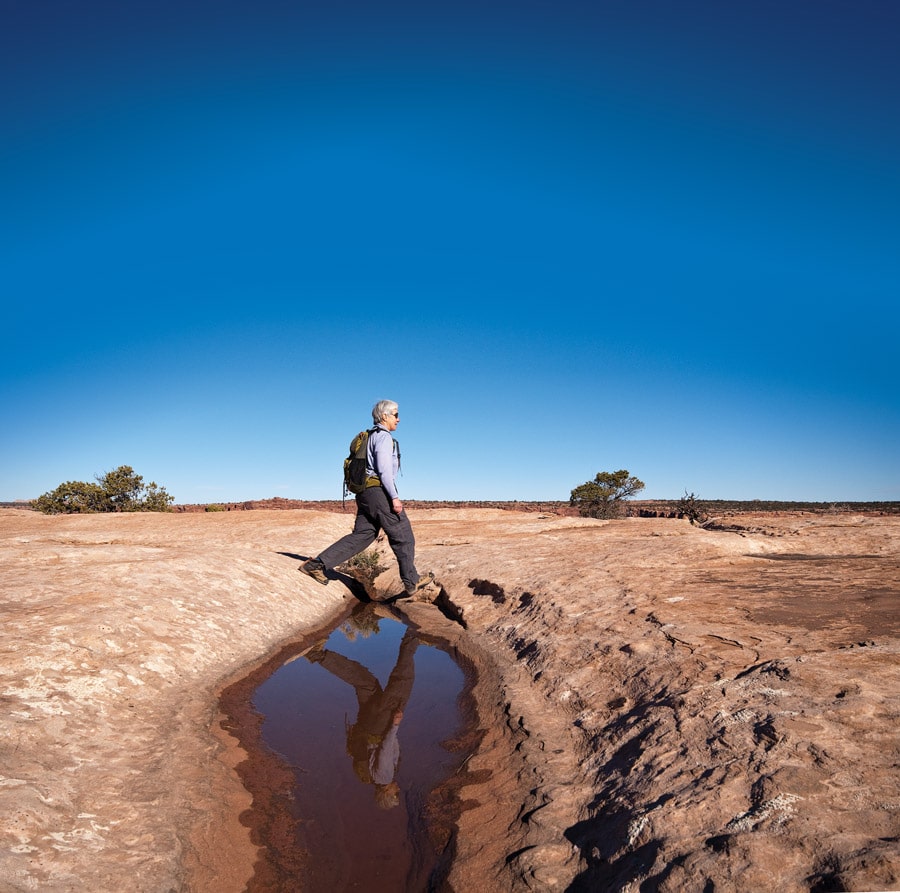 Although you may not guess it by its name, Dead Horse Point State Park is a delightful place. It sits atop a lofty mesa with see-forever views, stunning cliffs, canyon rims, fun and challenging mountain bike trails and hiking trails that lead to even more grand views. This is the place people have been talking about, and we recently learned why.

My husband, Mike, and I discovered Dead Horse Point while RVing through Utah, and we found this place extra special. Located southwest of Moab, a town known for its awesome mountain biking and world-famous arches at Arches National Park, Dead Horse Point is accessible by traveling northwest on U.S. Highway 191 for about nine miles and then west and south on Utah 313, also called the Dead Horse Point Mesa Scenic Byway, for roughly 23 miles. The scenic byway also provides access to Canyonlands National Park and is an easy drive for RVers.

Along the way be sure to look for wildlife, and if you like being amazed by ancient art, look for the pictographs and petroglyphs just off the highway. They are past mile marker 20 on the north side of the road. Although researchers still haven’t figured out what the ancient artwork actually symbolizes, you can see drawings that appear to look something like a fox, bighorn sheep, and perhaps some sort of mystical people. There really isn’t much room to park, so if you are towing a trailer you may have to park elsewhere and drive back to the site.

En route to the state park, established in 1959, you’ll see paved parking areas where you can pull off the road and admire landmarks such as Monitor and Merrimac buttes. Look for the lofty land forms towering 600 feet above their Navajo sandstone base. Named because they somewhat resemble two Civil War ironclad ships, Merrimac is actually spelled Merrimack. Misspelled in the past, it continues to be misspelled today. Monitor Butte was named for the Union ship sent to destroy the Merrimac. Significant in Naval history as the first battle between ironclad ships, today the buttes, composed of Entrada sandstone, continue to appear locked in timeless battle.

You’ll also want to stop and admire the view of the La Sal Mountains in the distance with numerous potholes in the foreground. Unlike potholes we find on back roads and highways, desert potholes are an enigma of the Colorado Plateau. Also called ephemeral (meaning short-lived) pools, these potholes are naturally occurring sandstone basins that range in size from shallow puddles to deeply carved pools. Animals that live on the mesa wait for weeks for rain or they travel countless miles in search of water. After a rain, potholes provide a temporary water source for these animals.

The potholes also provide homes for animals. Even the smallest potholes may be a haven for microscopic invertebrates. Look closely and you may find clam shrimp, fairy shrimp, or maybe tadpole shrimp and Great Basin Spadefoot toad tadpoles. Mike and I arrived the day after it had rained and while the soil was already dry, there was water in some of the potholes.

Upon arriving in Dead Horse Point State Park, you’ll find a potpourri of potholes. The park is 5,300 acres, so be sure to stop at the visitor center for maps and information. We stopped and learned much about the local plants and animals, marveled at canyon country geology and were amazed by prehistoric cultures and park history. While there, be sure to walk the self-guided nature trail for additional information about the local environment.

Although the park sports a harsh, dry climate (it averages 10 inches of precipitation a year), the local plants and animals have adapted. More than 90 different species of desert plants including piñon, juniper, single-leaf ash and oak, make their home here. In addition, there are sagebrush, squawbush, rabbitbrush, buffaloberry, yucca and cactus.

More than 100 species of animals live in or visit the park. Mammals include desert bighorn sheep, mule deer, kit fox (a small desert fox on Utah’s Sensitive Species list), desert cottontail, black-tailed jackrabbits, rock squirrels and a number of bats. There are about 63 species of birds including golden eagles, peregrine falcons and ravens. Reptiles include sagebrush lizards, whiptails and gopher snakes. Two amphibians — the red-spotted and Great Basin Spadefoot toads — also live in the park.

Dead Horse Mesa is an almost isolated island-mesa with access only from the north. At one time the area was used as a natural corral for wild horses. In the 19th century, cowboys would drive the wild horses out to the end of the unique promontory. Serving as a natural corral — the only escape a very narrow, 30-yard neck of land — the cowboys fenced the horses in so they couldn’t escape. After the cowboys roped and broke the horses, they chose their favorites and herded them north. Unwanted mustangs, often called “broomtails,” were left to fend for themselves. According to one legend, a band of broomtails was left at the Point. The gate was suppose to have been left open so the horses could return to the open range, but for some unknown reason the horses remained on the Point and died of thirst, the Colorado River far below.

Remnants of the fence are visible today. While today’s visitors no longer herd mustangs, evidence proves that humans have used the area now known as Dead Horse Point State Park for at least 10,000 years. First came the Paleo-Indian culture, next the nomadic Archaic people, known for the rock art and stone tools found in the area. Both the Ancestral Puebloan and Fremont peoples settled in the area by A.D. 500.

They hunted game such as deer, rabbits and bighorn sheep, and they grew crops of beans and maize. Years passed and the Ute and Paiute cultures may have arrived in the region as early as 800 The Navajos moved into the area sometime after 1300. Europeans settled in the area in the 1800s when the Mormons tried to establish the Elk Mountain Mission in 1855, but they abandoned their efforts after having conflicts with the Utes. In 1878, settlers returned  and founded the ranching community of Moab, today’s gateway for the state park and nearby national parks.

After learning some history, we made camp then headed out to Dead Horse Point to gaze at the view. Located on a heavenly plateau about 2,000 feet above the Colorado River, we stood at an elevation of 6,000 feet above sea level and marveled at 300 million years of the earth’s geologic history. We looked east to see the La Sal Mountains, snowcapped peaks more than 12,000 feet high. From there to the Colorado River below we viewed 8,000 feet of geologic strata.

Spying golden eagles, mule deer and plants such as Newberry’s twinpod is common when exploring the park.

The park rests on top of a column of rock offering no fewer than 13 distinct layers. In addition to the La Sals, we could see Utah’s Abajo and Henry mountain ranges, and we looked east to our home state of Colorado to see the towering San Juan Mountains, a view possible only on clear days.

While we were at the park we hiked all seven miles of hiking trails, and we thrilled to nine miles of beginner-level single-track mountain biking. The Intrepid Trail System is awesome. Designed for beginner mountain bikers, but fun for everyone, the Intrepid Loop offers 1.1 miles of fun.

The Great Pyramid Loop is 4.2 miles and provides great views. Bikers with additional energy will thrill to Big Chief/Canyon Overlook, a nine-mile loop. Traveling through piñon-juniper flats, the trail ratings are considered easy, but there are many tight corners and a few technical spots where you will probably have to walk. We’re moderate-level mountain bikers and we definitely had to walk on occasion.

If you’re out hiking or biking, you’ll see the biological soil crust called cryptobiotic crust. Meaning hidden life, this is a unique ecosystem, a living soil crust composed of bacteria, lichen, algae, fungi and mosses. The unique soil should be left alone so please stay on the trails.

With such a unique ecosystem, wild legends, interesting history and scenic views, Dead Horse Point State Park will, no doubt, keep you talking as well.

Plenty of photo ops present themselves, especially at sunset.

Dead Horse Point State Park is open year-round, though most people visit in the warmer months from May through September. From June through early September, expect thunder- storms. Spring and fall are grand times to visit. If you visit in winter expect highs around 40 degrees F and lows around 22 degrees F. The park generally averages about 26 inches of snow. If you visit the park for the day (cost $10 per vehicle with up to eight passengers) you’ll find day- use facilities with shade pavilions at the overlook, covered picnic areas, restrooms and water. The 21-site Kayenta Campground is especially nice. A site costs $20 per night and includes entry to the park, a tent pad for those tenting, electric hookups, a covered table complete with enclosed shelves for storing goods, a charcoal grill, and modern restrooms with dishwashing and sewage disposal stations. RVers should fill their water tanks before coming to the park as all water is trucked in from Moab. Showers are not available and there are no fire grates; campfires are not allowed. Although the park doesn’t have a length restriction, if you have an extra long RV, or you just want a larger site or you want to have a campfire, consider staying at Horsethief Campground, located about eight miles north of the park. A BLM facility, there are 58 sites, many suitable for large RVs, with outhouses, fire grates and picnic tables, but no charcoal grills. Price is $12 a night and sites are first-come, first-served. Water is not avail- able. For more information about Horsethief call (435) 259-2100.