The Rally: From Louisville to Daytona 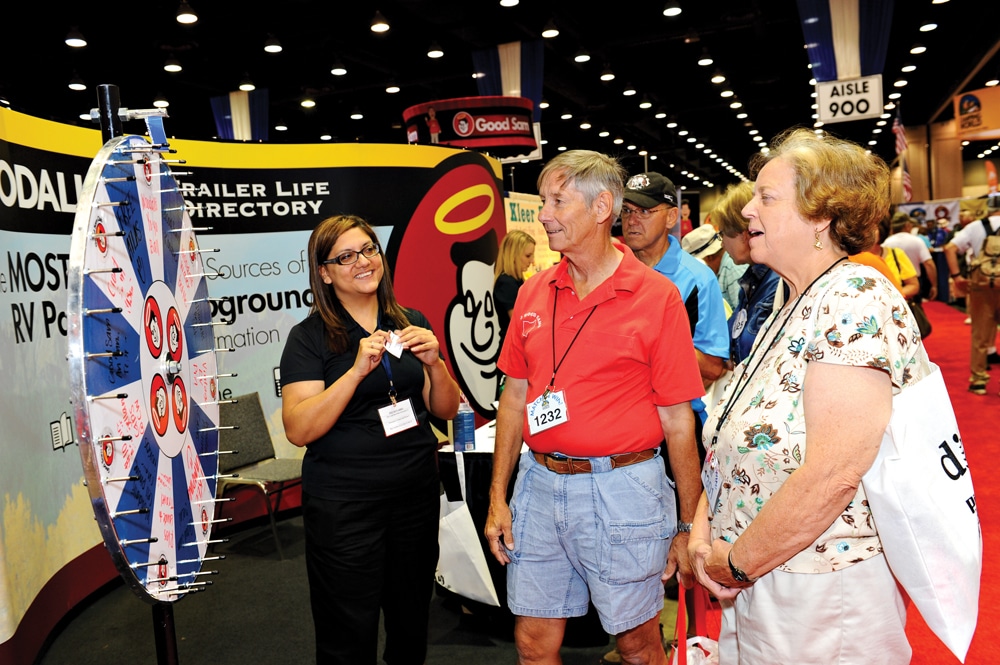 Rally-goers get ready to spin the wheel and win at the Woodall’s booth.

The excitement began as 2,033 RVs from all across North America, and even as far away as Australia, rolled into Louisville, Ky., June 21-24 for the Good Sam Rally. Over the next few days, thousands of rally-goers attended valuable and interesting seminars, ranging from computer technology and traveling to Alaska to RV engine performance and the evolution of Kentucky bourbon.

History buffs stepped back in time at the vintage RV display and through seminars presented by the RV/MH Hall of Fame. Foodies gobbled up the Good Sam Culinary Experience, learning useful cooking tips. Kids and teens were treated to all-day youth programs.

There was something engaging for everyone at Louisville’s Kentucky Exposition Center, site of the second of three Good Sam Rallies this year, presented by DISH. From pop-up campers to luxury motorhomes, new RVs of all types and sizes spread their awnings and opened their doors to Rally guests; aisle after aisle of booths exhibited everything from RV generators and hand tools to clothing and jewelry.

Grammy-winning singer-songwriter Sheryl Crow performs before a packed house on the final night of the Good Sam Rally in Louisville, Ky.

Whatever the musical tastes of guests, the Rally had it covered. There were the Gatlin Brothers’ country hits, along with the nostalgic love songs and melodies of Burt Bacharach, followed by an action-packed evening with pop superstar Sheryl Crow. For fans of the “King of Rock ‘n’ Roll,” Elvis was definitely in the building, performing a rousing, hip-swiveling closing act.

Vendor booths and new RVs packed the exhibit hall, not to mention the thousands of happy campers looking for the latest products to enhance their RV lifestyle. Hundreds of participants found their match during Camping World’s Match n’ Win game, which not only introduced them to new friends but also made them eligible for the giant drawing to win hundreds of RV products.

Women enjoyed an exclusive driving seminar and a Kentucky Derby hat show. Even the Rally’s dogs had their day, with their very own bark park. There was a Rally dog show and training tips from Dogs for the Deaf’s Robin Dickson, plus a successful pet adoption event.

As part of the Good Sam Culinary Experience, the host of the Food Network’s “Surreal Gourmet” and “Glutton for Punishment” Bob Blumer conducted three cooking demonstrations, showing Rally-goers how to create fun dishes from basic ingredients. Also on hand was Evada Cooper, author of The RV Centennial Cookbook – Celebrating 100 Years of RVing, who demonstrated how to make an RV kitchen more efficient, with tips on stocking and storing supplies for an RV galley. MotorHome and Trailer Life magazine publisher Bob Livingston also offered sage RV advice and answered Rally-goers’ questions in his RVing 101 seminar.

During the Salute to Veterans, military veterans proudly marched behind the flag of their branch of service through the halls of the Kentucky Exposition Center. Retired U.S. Army Brig. Gen. Julius “Bud” Berthold and two Medal of Honor recipients, Woody Williams and Don Jenkins, reviewed the Good Sam troops.

Plenty of colorful and patriotic costumes were on display during the Rally dog show.

Sites are still available and many favorite Louisville activities will take place again in Daytona Beach, Fla., during the next Good Sam Rally, Nov. 2-4. As always, there will be a huge trade show and hundreds of educational seminars, along with the crowd-pleasing dog show, vintage RVs on display and the veterans’ recognition parade. All this will take place in the infield of the Daytona International Speedway.

Reba McEntire, the biggest star ever to appear at a Good Sam Rally, headlines Daytona’s entertainment lineup. McEntire has sold more than 56 million records and appeared in the long-running television series “Reba.” Katharine McPhee, discovered during the fifth season of “American Idol” in 2006 (she’s currently starring in “Smash” on NBC), will likewise grace the Daytona stage.

For more information about the Daytona Rally, call 877-749-7122 or visit www.TheRally.com.