The Other Alabama: California’s Alabama Hills 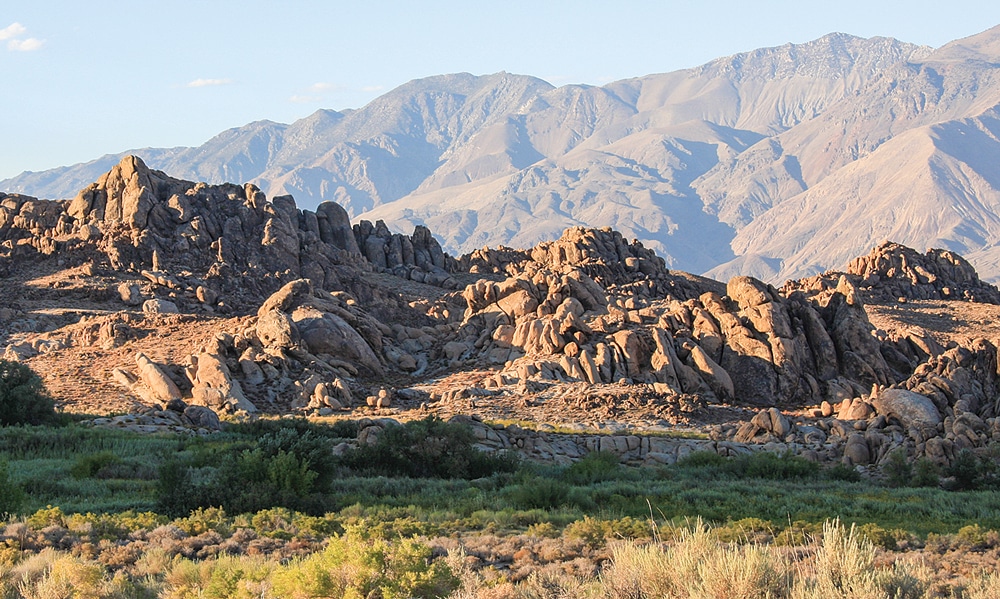 In the shadow of Mount Whitney, a range of Southern-sounding hills rises up on the eastern slope of California’s Sierra Nevada

You’ll find recognizable terrain from hundreds of movies, thousands of commercials and innumerable television shows. Movie productions from Gunga Din to Gladiator have called the Alabama Hills and the surrounding Owens Valley home. Even Tarzan left Culver City to film a couple of movies here.

Driving along Movie Road — an accessible two-lane dirt strip that parallels U.S. 395 — inspires déjà vu as you get a look at the shooting locations of so many motion pictures. Even first-timers to the area swear they’ve been here before, as every bend in the road brings another familiar scene.

To find Movie Road, go west of Lone Pine on Whitney Portal Road. Turn north at the movie monument plaque. This is public Bureau of Land Management property, so choose a flat spot, roll out the awning and lean back to enjoy the snowcapped Sierra Nevada to the west, the White Mountains across the Owens Valley and the rocks of the Alabama Hills. Unleash your inner child and imagine the rocks and boulders as goblins, horses, fortresses or anything else under the sun.

The Alabama Hills and Sierra Nevada behind them provide a panoramic camp setting and dual filming locations for blockbuster movies.

Continue west up Whitney Portal Road to the trailhead for hikes on Mount Whitney, the highest peak in the Lower 48. The full hike is an endeavor for those who are extremely fit, and you’ll need a permit to make the trek from May 1 to November 1. During permit season, the trail is limited to less than 200 hikers on any given day.
Back on U.S. 395, be sure to visit the Lone Pine Film History Museum to explore the costumes, cars, props, posters and other movie memorabilia on display. This collection tells the story of filming in the region from the early days of silent movie comedian Fatty Arbuckle to modern blockbuster movies such as Iron Man.

U.S. 395, the highway that doubles as Lone Pine’s Main Street, is interesting in itself and a worthy drive. The route connects to the U.S. borders with Mexico and British Columbia and flows through three states along the eastern slopes of various mountain ranges.

Following 395 north a few miles out of Lone Pine, you’ll find Manzanar National Historic Site. Take a moment to walk around the internment camp and reflect upon the many Japanese-Americans housed here during World War II. It’s a beautiful location, despite the troubling history.

The Owens River that runs through the valley was ravaged in the 1930s when the Los Angeles water department built the first aqueduct to haul water from the Sierra to thirsty Los Angeles, events that inspired the movie Chinatown. Department employees dynamited beaver dams, decimated lakes and almost turned the Owens Valley into a dust bowl.
Fortunately, the federal government stepped in several decades ago, but the Owens Valley has never quite regained its former glory. Yet even with the current drought, it’s still wet enough to support a healthy mosquito population, so bring plenty of insect repellant.

If you visit during spring, make the drive north to Bishop to see the wildflowers. Every year Bishop hosts its popular Mule Days Celebration on Memorial Day weekend, with events running from May 20 through 25, 2014. The 45th annual festival takes place at the Tri-County Fairgrounds and features more than 700 mules competing in 181 events.

One of the best things about boondocking in the Alabama Hills is it’s free on nearly 30,000 acres of public BLM land west of Lone Pine.