The LED Revolution: Shedding Light on the New Bulbs 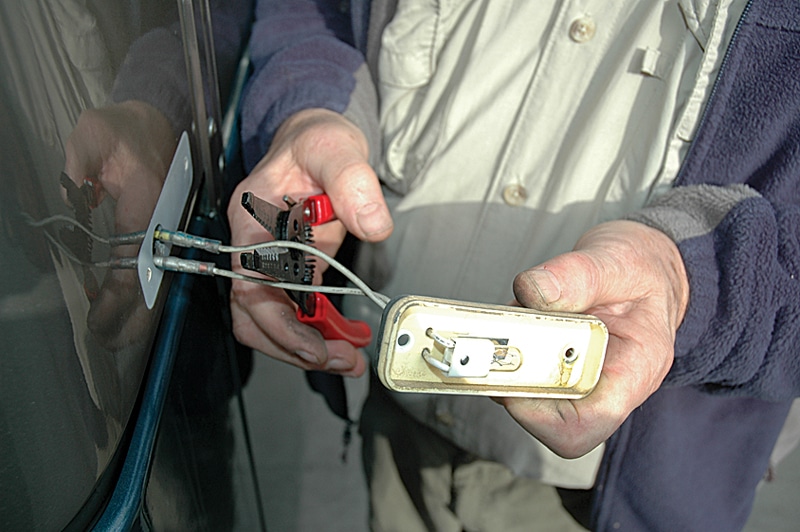 RVers put plenty of energy into their lifestyle, from planning the trip to readying their rig. What most RVers aren’t aware of, however, is the amount of energy used by their fifth-wheel or travel trailer in just the flick of a light switch.  That’s why we put some light-emitting diodes (LEDs) to the test. Here’s what you need to know before opening your wallet.

In 1962, when LEDs were introduced as a practical electronic component, most of us didn’t know what they were. Early LEDs emitted low-intensity red light, but modern versions are available across the visible, ultraviolet and infrared wavelengths, with high brightness. Today, LEDs are flooding the RV market.

There are three types of lights traditionally used in RVs: incandescent, halogen and fluorescent.

Incandescent bulbs, normally used in brake and turn-signal lights and in many interior lights, have been around for more than 100 years. They produce reasonable light, but they also put out considerable heat and use a lot of amps in the process, draining your batteries if you do a lot of dry camping. They have a long life and are cheap.

Halogens are popular. They also generate a lot of heat, give off a very bright light and are pricier.

Fluorescent tubes are common in overhead or over-the-countertop lighting. They run slightly cooler, consume less energy, put out a nice amount of light and don’t cost too much. They are limited generally to 12-inch and 18-inch single or double fixtures, and they have a longer life than halogens. We have used Optronics’ Pulsar 12-inch and 18-inch dual fluorescent lights for years.

Installing the Optronics LED side markers required cutting off the OEM connections and splicing the wires with Quick Cable butt connectors.

Polarity can be checked with a simple multimeter.

Optronics replacement side markers for both red and amber featured light-emitting diodes that were actually the correct color.

The Jirah 1330 B45 R5 Extreme with 13 LEDs was a good fit and did produce more light than the original incandescent bulb.

Some replacement bulbs were too big to fit the housings.

Using a Jirah 1210 B45-L3 in the backup light proved an ineffective choice.

LED replacement bulbs in the same applications were a huge disappointment.

The round Grote sealed fixture used in the shower had a built-in timer and motion sensor.

In the engine compartment the Starlights Revolution 200 bulb made a big difference.

LEDs have such a low output that Underwriters Laboratories (UL) has not certified them. The Recreation Vehicle Industry Association (RVIA) requires anything greater than 4 watts be listed.

In a recent interview, Mike Camarota, president of RV lighting manufacturer ITC Inc., said, “You can get similar light from a 3-watt LED as you can get from a 10-watt halogen.” Multiply that difference in a fifth-wheel with a couple dozen halogens and incandescent bulbs and you have a remarkably huge difference in power consumption. (Did we mention heat?)

LEDs can be expensive; often two or three times the cost of a halogen bulb. Camarota said the average halogen bulb might last about 1,000 hours, while an LED can last up to 50,000 hours. In an RV environment with variations of power that could fall to 35,000 hours, but it’s still probably longer than the useful life of the RV.

So far, the switch to LEDs seems to be a no-brainer; less heat, lower amp draw and more light. Complicating matters are the many different applications to consider.

Putting LEDs to the Test

For our test, we borrowed a 2005 35-foot Itasca Meridian to see just what the LED difference might be. Armed with a selection of lights and fixtures from Starlights, Jirah, Optronics, ITC and Grote, there was a lot to learn and some real surprises.

Starting on the outside, we replaced the side indicator lights, brake lights, turn signal lights and running lights, back up and docking lights. Optronics supplied exact replacements for red and amber side markers. The little light-emitting diodes are actually the correct color. Installation required cutting off the OEM connections and splicing the white and black wires with Quick Cable butt connectors that have built-in heat shrink. When heated with a flame or a heat gun, (a disposable cigarette lighter or a small chef’s tool called a crème brûlée torch works well), they shrink around the connection and seal themselves with glue, eliminating future corrosion. In a pinch, the wire nuts supplied will also work. This was the start of some interesting results when replacing incandescent bulbs with LEDs.

It should be noted that some but not all LED lights and bulbs are polarity sensitive. Polarity can be checked with a simple multimeter or just by touching the ground and positive to the corresponding wires on the light. No light? Reverse the wires. Wire colors can vary among white, black, yellow and red, depending on the manufacturer.

For the turn signals, we used a Jirah Extreme LED designated as the replacement for the 1156 incandescent. On the brakelights and taillights we used Starlights 1157. Both looked very bright, but checking their output at night compared to the OEM lights was a shock. It was obvious that just replacing an incandescent bulb with an LED was not a good idea.

If you look at LEDs on a big semi truck, you will see the whole light is full of LEDs. The replacement bulbs, however bright they were, just created a hot spot in the middle of the lens that was specifically designed to work with an incandescent. The same was the case with the backup lights. Using the Jirah 1210 B45-L3 was similarly an ineffective choice.

In the docking light that used a wedge base bulb, we tried the Jirah 0930-B45 R3 but it was too big to fit through the housing. The Jirah 1330 B45 R5 Extreme with 13 LEDs was a good fit and did produce more light than the original, probably because of the design of  the lens and reflector, and the number and placement of the LEDs on the bulb.

Both the front porch light and the similar driver’s overhead sidelight were woefully inadequate. Like many owners do, the recommended 15-amp bulb in the porch light had been switched to a 21-amp incandescent to get more outside light. Often this light is left on all night. The result was actually melting the lens. A Starlights Revolution 220 bulb seemed to double the brilliance with almost no heat.

The Optronics 22758-091 flush-mount dome light with 21 LEDs was too bright for a porch light, but perfect to replace the driver’s side overhead outside hookup light.

Moving around the motorhome, we found several places where replacing the incandescent bulbs with an LED produced a significant improvement. The coach’s owner thought the hot water and electrical compartment needed more light during nighttime hooking up.  A small Optronics flush-mount replaced the factory light above the water heater, and a Jirah Extreme 3630 V45 R1 flat peel-and-press light was mounted above the electrical compartment, both on the same switch.

In the front generator compartment and rear engine compartment, the Starlights Revolution 200 bulb made a big difference. The housings on the Revolution 200 rotate to direct the light where you need it most. An Optronics ILL71CB flush-mount, 16-inch strip LED light worked perfectly in the side basement compartments, providing more light to the contents and the area in front of the compartment.

Moving inside, the weak wedge-base incandescent bulbs in the main dimmable overhead fixture over the bed were replaced with ITC 69912-3k warm white Wedge Base LED bulbs that draw only .12 amps. The bedside reading lamps were producing an uncomfortable amount of heat at night. A pair of Jirah 1530-S45-R3 flat wedge lights gave double the reading light and dramatically reduced the heat output. A weak light in the bedroom TV compartment was replaced with an ITC 69927-N13 LED Cluster Surface Mount Overhead Light fixture.

In the shower we used a round Grote sealed fixture that had a built-in timer and motion sensor. The hallway between the bathroom and the shower was improved with a pair of Jirah Extreme LED stick-on lights. The flexible 3M adhesive backing conformed nicely to the slightly curved surface.

In the main living and dining room, all of the heat-producing little spot reading lights were upgraded to Starlights 1383-220 Revolution bulbs, greatly reducing the heat in that area. When testing the three overhead double fluorescent lights, we first tried the Starlights replacement bulbs, but our test judges (our wives) agreed they were too harsh and bright. Switching to Jirah thin strip peel-and-stick lights designed to fit Thin Lights or Optronics housings, the result was judged more pleasing. Over the sink, the Starlights 12-inch replacement tubes gave a bright, clean light perfect for food preparation or washing dishes.

The uses of LEDs are not limited to an RV. The owner of this coach often pulls a small, enclosed trailer for his motorcycle. Installing the Starlights LED tubes in the main overhead fixture really lit up the inside. Outside, where there was never a porch light, the owner installed a K-Four light with a built-in switch and changed the bulb to a Jirah Extreme flat light. K-Four also has a large selection of small toggle switches that can be adapted to LED lights.

While we did not use it here, the Starlights Brilliant Light fixture is a unique lighting product. By adding plug-in accessories, the LED Brilliant Light can be controlled by a dimmer, a day/night sensor or a motion sensor. There is also a night-light feature, and all of this in one unit (single or double), with three replaceable LED light strength options.

LED lights are bright and direct. Some people might even call them harsh. ITC’s Camarota observed that the top issue facing the LED lighting industry is going to be consistency of color. If you have a dozen overhead lights in a room, you want them to all look the same. Pablo Gonzalez of Optronics said the company is developing lights that will have the options of cool white, neutral light — more daylight looking — and a warm light, so customers will have a choice.

The bottom line is every RV will be different. LEDs come in wedge base, double and single bayonet, peel-and-stick with both wedge or bayonet connections, and fully integrated replacement fixtures. Some are too bright. Others are too directional. When replacing incandescent bulbs with LED bulbs, the design of the lens and the reflector are critical if any improvement is to be obtained. They can be comparatively expensive, so careful selection is important.

Replacing incandescent bulbs on the outside just to lower amp draw and reduce heat may not make any sense for the investment, and in the case of our tail and brakelights test, offer no light output advantage at all. Life expectancy is moot. We have had incandescent 1157 bulbs in our travel vehicles for more than 10 years and they are still burning bright. Should they fail, replacements are available in every auto parts store. We even carry a few in our electrical repair kit.

For some outside applications and for many inside locations, LEDs, when properly selected, can dramatically lower amp draw and heat, and often provide more pleasing usable light. Those who are willing to pay the freight will experience a new level of brightness that may take some acclimation, but will no doubt increase longevity and energy efficiency.